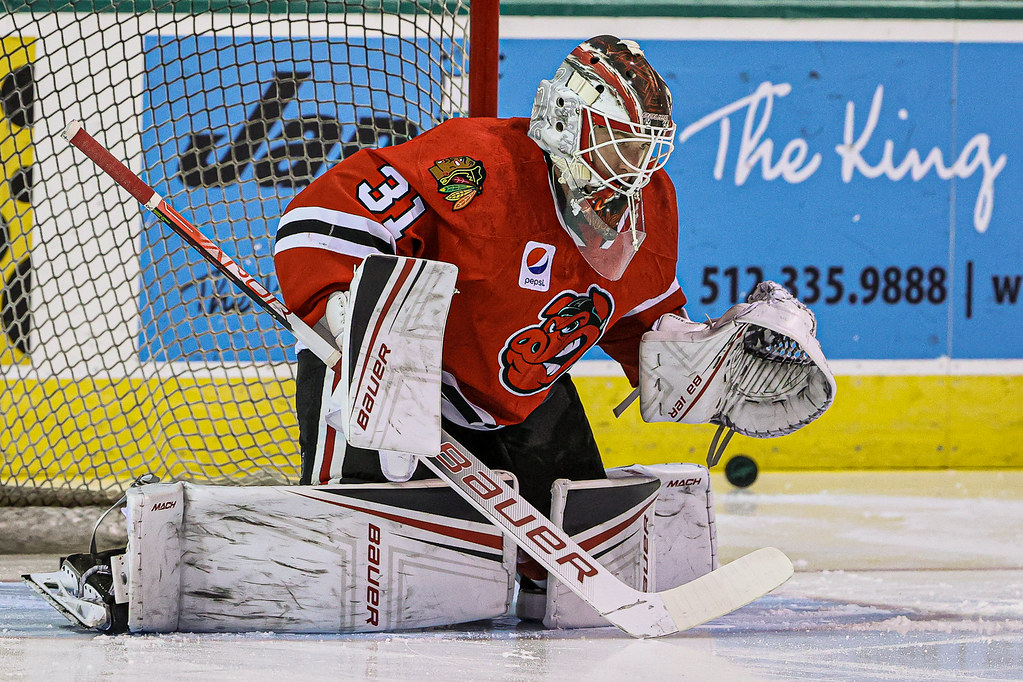 Dylan Wells has enjoyed a hot hand in December for the Rockford IceHogs. (Photo by Andy Nietupski/Texas Stars)

Rockford, Ill.–Dylan Wells was not supposed to be the number one man in net for the Rockford IceHogs this season. In fact, it was hard to imagine that Wells would start more than a game or two this season at the AHL level.

To look at the stat sheet and see Wells at the top of Rockford’s goalies in terms of performance is something of a surprise. Entering his fifth professional season, he had just 22 AHL starts in his career. Last season, he made three emergency starts for the Chicago Wolves, spending the bulk of the season with the Norfolk Admirals of the ECHL.

The IceHogs signed Wells this past summer, mostly to split the net with Mitchell Weeks with the ECHL’s Indy Fuel. Instead, Wells and Weeks have played in 19 of Rockford’s 27 games. Injuries throughout the Chicago Blackhawks system have tested the organization’s depth in goal. As a result, Wells was signed to an NHL contract back in November and saw his first NHL action on November 5.

After being returned to the IceHogs the following week, Wells has been in the goalie mix for Rockford ever since. With the Hogs in need of consistent play between the pipes, Wells has put together an excellent December. In five starts this month, Wells is 4-0-1 with a 1.95 goals-against average and a .928 save percentage.

On December 7, Wells stopped 20 shots against Milwaukee, holding the Admirals to a single goal and allowing the IceHogs to win in a shootout. Last Saturday at the BMO Center, Wells made 38 saves to help Rockford outlast the Hartford Wolf Pack.

Tuesday night, Wells was in net in Texas, facing a hot Stars team that had lit up the Blackhawks’ top prospect, Arvid Soderblom, for five goals on the way to a 6-1 win over Rockford the day before. The Hogs needed to rebound and Wells delivered, stopping 27 shots on the evening. The last was the biggest.

Wells laid out to snuff out a Riley Damiani attempt in overtime, leading to an IceHogs winner when David Gust scored at the other end of the ice.

For the season, Wells has played a team-high 12 games for Rockford, matching his AHL career-high set in his rookie season with the Bakersfield Condors in 2018-19. He is 7-3-1 with a 2.79 GAA and a .906 save percentage. Those numbers pace the IceHogs, with the exception of Weeks’s .909 save percentage.

Soderblom, who was slated to receive the bulk of the starts in Rockford when the season started, has just three so far. After playing the first two games for the Hogs, Soderblom was recalled to Chicago for most of the season. Monday night’s rough start in Texas was his first since being reassigned. Weeks, currently with the Fuel, has also played well in his seven starts with Rockford. Rookie Jaxson Stauber has also started to adjust to the AHL after missing some time due to injury.

The organization had penciled in Soderblom and Stauber to tandem for Rockford, with Wells and Weeks in net for Indy this season. Plans can and do change, and Wells certainly has made the most of his opportunity to play for the IceHogs.