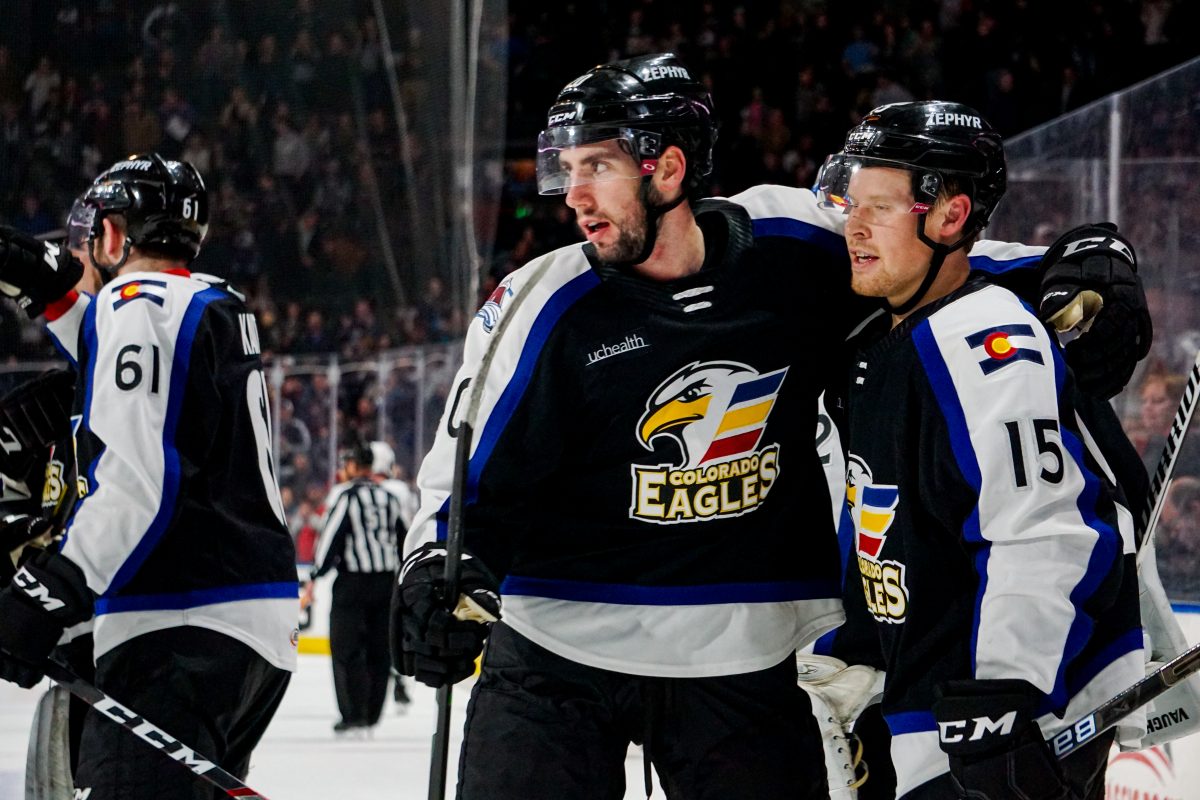 LOVELAND, Colo. – The Colorado Eagles came into Saturday undefeated since returning from the All-Star break on January 31.

LOVELAND, Colo. – The Colorado Eagles came into Saturday undefeated since returning from the All-Star break on January 31. With three straight wins (two on the road, one at home), could the Eagles make it four in a row against Pacific Division bottom-dweller, the San Jose Barracuda? Colorado would need 60 minutes and then some to find out.

The Eagles spent the beginning portions of the first period keeping the puck either in the Barracuda’s end or the neutral zone. As time went on, however, San Jose began to ramp up the physicality and levy a number of clean, open-ice hits to Colorado’s skaters. Standout rookie defenseman Joachim Blichfeld drew first blood, netting the opening goal at exactly 7:00 of the first. Another Barracuda d-man, Keaton Middleton, made it 2-0 with a tally past Eagles netminder Hunter Miska at 16:03 of period one.
Colorado had a chance to turn the tide before the first intermission. Forward Martin Kaut was knocked down in front of the net as the Eagles were in the midst of an offensive push in San Jose territory. As Colorado cycled the puck behind the net and back out front, a shot on net was blocked by Barracuda goaltender Josef Korenar, rebounding out to Kaut. The right winger wristed a shot from his knees, seemingly scoring right below the crossbar. But no goal was signaled, and play was blown dead shortly after. Eagles Head Coach Greg Cronin asked for and was granted a review, but the call stood. San Jose went into the locker room with a 2-0 lead after one.
The second period had Colorado head to the power play in short order after a Noah Gregor hooking call just 42 seconds in. Kaut then made up for his earlier almost-goal, deflecting a Conor Timmins shot into the net to make it a one-goal game at 1:35 into the second. San Jose responded with a power play goal of their own almost six minutes later, as Antti Suomela patiently strafed left around a downed Miska before lofting the puck into the open net at 7:17 to make it 3-1, Barracuda.
The Eagles wouldn’t back down, fighting back through increased physical play and on the score sheet. Colorado captain Mark Alt pulled the Eagles within one goal yet again after putting the puck by Korenar on the doorstep at 15:05 of the second segment. The Eagles then began to clamp down defensively, putting the body on San Jose’s attackers with a fire seemingly lit under their collective butts.

Barracuda d-man Trevor Carrick then received a double minor (hooking and unsportsmanlike conduct) at 16:40 of the frame, giving Colorado their fourth power play chance of the night. Just seven seconds into the four-minute man advantage, Timmins launched another shot on net, with Sheldon Dries being the one responsible for the redirect this time. The score brought the game to a 3-3 tie heading into the second intermission.
The third period did not produce any scoring from either side, but did see tempers flare a bit from the likes of Colorado’s A.J. Greer, Dries, and San Jose’s Jeffrey Viel. Greer poked at Korenar after a referee’s whistle, earning a slashing call at 5:51 before being roughed up by Viel for his troubles. Viel was a part of another coinciding minor later in the period, as he and Dries earned both roughing and fighting penalties at 13:31 of the third.
Although quick to go down after a couple hard punches from Viel, Dries commented postgame that his teammates were nothing but supportive of his efforts.

“They always love it, just being willing to fight and fight for your teammates no matter what the situation is. We’re all happy to do it, and you might not win every fight, but it’s about showing up.”

The Eagles finished regulation out on a power play, unable to find the back of the net after a Sasha Chmelevski tripping call at 18:06.
After seven power plays during the first 60 minutes of play, the eighth and final man advantage for Colorado would prove to be the back-breaker for San Jose. As Barracuda centerman Antti Suomela received a holding minor at 2:58 of overtime, Eagles center T.J. Tynan set up defenseman Jacob MacDonald for a one-timer. Korenar made the initial save, but the rebound went to a waiting Dries on the doorstep for his second of the night, his eighteenth of the year, and his third game-winning goal of the season at 3:54 of OT.

MONKEY OFF THE BACK

As the second consecutive game between the San Jose Barracuda and Colorado Eagles played out on Saturday night, an interesting point was brought to my attention. Patrick Lyons of DNVR informed press row that the Eagles were 0-9-0 when trailing after one period. Researching further, I found that Colorado was the last team in the AHL to carry such a winless statistic. Going down 2-0 after one period on Saturday, the Eagles’ 4-3 overtime victory added one win in 10 games to the previously fruitless record.

Coming into the game with a power play conversion of 15.3% (24th in the AHL) and penalty kill rate of 81.3% (19th in the league), Colorado went 3-for-8 (37.5%) on the man advantage and killed off three of San Jose’s four power play opportunities on the night. Eagles defenseman Mark Alt, a key component of Colorado’s penalty kill, spoke after the game on how special teams is crucial for the Eagles moving forward.

“This is the time of year where it has to start clicking; you’re going to need special teams down the stretch if you want to make a good push. It’s nice to see both of them starting to click and working here going towards the last (bit of the season).”

Colorado will play host to Tucson on Tuesday and Wednesday (7:05pm MST), marking the second time this season the Eagles have played the Roadrunners in a two-game home set. Four crucial Pacific Division points will be up for grabs, as the first place Roadrunners (60 points) look to further distance themselves from an encroaching Eagles squad (56 points). Colorado is 5-3-0 against Tucson in 2019-20.
Follow C.C. on Twitter for live, in-game coverage and various news & notes regarding the Colorado Eagles! Don’t forget to follow The Sin Bin on Twitter and Facebook for all additional AHL, ECHL, and SPHL minor league hockey coverage!