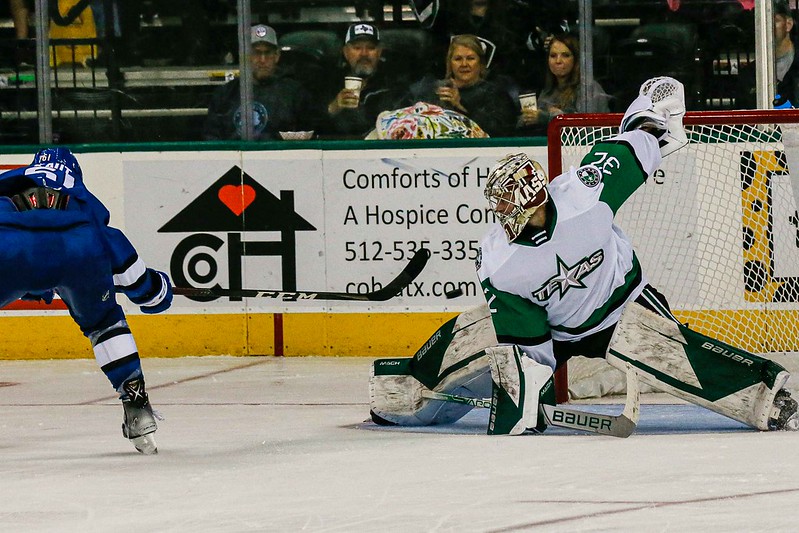 CEDAR PARK, Texas — The Texas Stars opened up their campaign on home ice Friday, welcoming the Colorado Eagles to town. The Stars looked to open up their season with a bang on a night that saw the Eagles win 6-3.

Fresh out of the gates, the momentum swung Colorado’s way. An early penalty by Oskar Back ceded the first power play opportunity. With time dwindling, Colorado’s Martin Kaut put the Eagles ahead. After the initial goal, Colorado pressed and gave the Stars’ defense fits. On the counterattack, rookie Mavrik Bourque fired a turnaround backhander up and in to knot it up at one.

Mavrik Bourque opens the Texas Stars season with a beauty on the backhand.#TexasHockey pic.twitter.com/sUBbHpotli

The stalemate didn’t last for long. Charles Hudon picked up the pieces around the crease to restore the lead before the period closed out. In the second period, it was more of the same. Colorado outpaced the Stars and found themselves alone several times. All solo chances were stopped by second-year goaltender Matt Murray, who continued to showcase his goaltending acumen. Murray was able to fend off the onslaught from the Eagles until Kaut sniped his second goal of the night to extend the lead. Just minutes later, Hudon followed up with his second of the night. At this point, the Stars were having trouble keeping up with the rush opportunities and puck movement of Colorado. Down 4-1, they needed to punch back. The Stars got their answer late in the period from rookie Matej Blumel who has impressed since coming over from Europe this offseason. Just like Bourque, Blumel got on the scoresheet in his first appearance for the Stars.

The good feeling dissipated less than two minutes later when Jean-Luc Foudy put Colorado back in front by three going into the final frame. The response by the Stars in the third period will be something to take note of. Scoring 54 seconds into the period and maintaining a strong offensive zone presence via puck movement and forechecking, the opportunity to steal a point was present. Unfortunately for the Stars, it was a case of too little, too late. An empty netter spoiled the comeback effort and the Stars dropped their season opener at home.

There are plenty of reasons as to why the Stars lost this game. First, this group is seeing quite a bit of turnover in the forward core, and those who remain from last year’s squad are either very young or not known for their scoring prowess. Second, the Stars continue to have trouble accounting for the speed of other teams. In situations where the defenders pinch to keep the puck in the zone and can’t, Colorado shined. Finally, there was quite a bit of puck watching in the defensive zone, which led to some wide-open opportunities that Colorado capitalized on.

Stars Head coach Neil Graham figured this could be the case coming in. saying

“Things kind of snowballed and that’s not uncommon. It’s our first time on a bench together, first time in an intermission together,” Graham said.

Half of the top-six were playing their first game in a Stars sweater on Friday, and finding that chemistry with linemates can be difficult. It’s clear that the coaching staff has a plan and is working to make this group play in a system that is going to get results.

Perhaps the most positive sign coming out of this result is the fact that all of the Stars goals were scored by players who are brand new to Texas. Bourque and Blumel scoring in their pro debuts and veteran Riley Barber netting the third should bring some sense of comfort for fans. We know what to expect from most of the rest of this lineup and seeing an immediate contribution from some of the new guys should spark some excitement for this season.

The Stars get a chance to split the series on Saturday night before heading out for their first road trip of the season.