LOVELAND, Colo. After a 4-2 loss on Saturday where they fell behind 3-0 in the first period, the Colorado Eagles hosted the Milwaukee Admirals again on Sunday afternoon looking to even the weekend series. 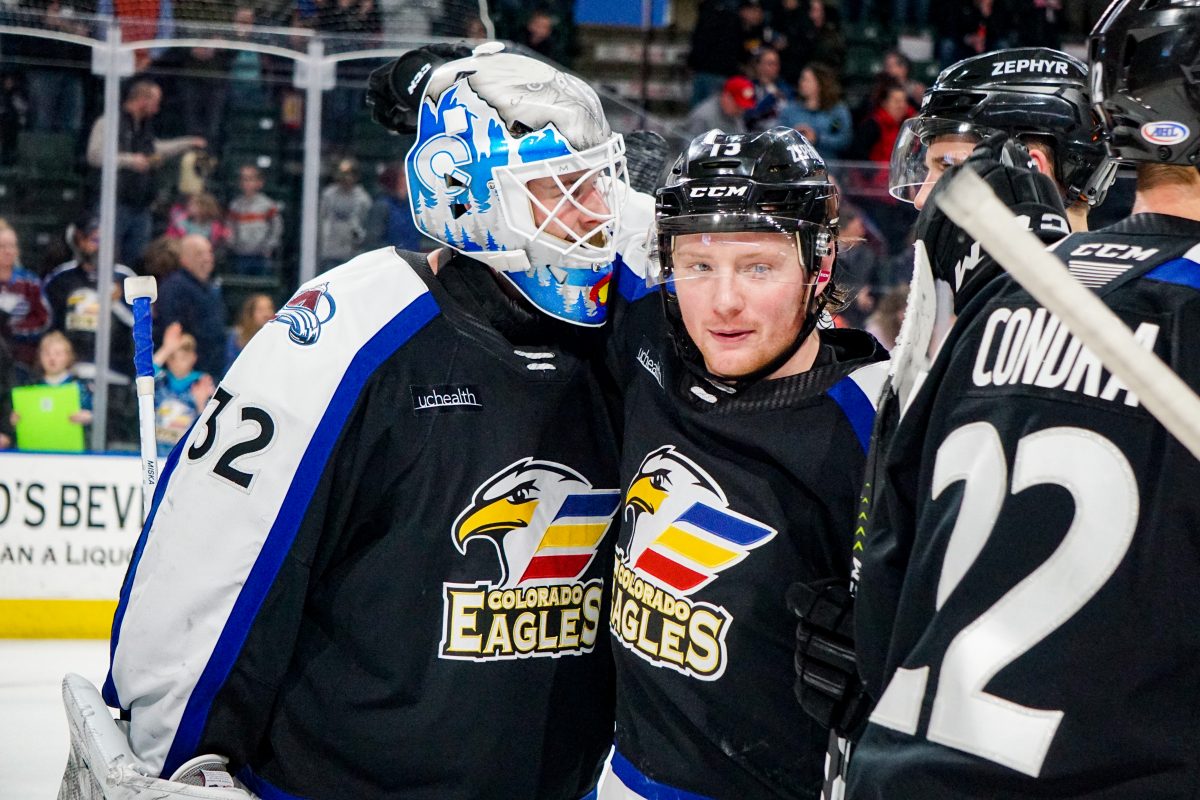 LOVELAND, Colo. – After a 4-2 loss on Saturday where they fell behind 3-0 in the first period, the Colorado Eagles hosted the Milwaukee Admirals again on Sunday afternoon looking to even the weekend series.

The game began with the Eagles wanting to make a statement, succeeding on both the forecheck and backcheck to start out the matchup. With both sides of the puck stepping up, Colorado kept the shots on goal with Milwaukee about even through the first 10 minutes of gameplay. Tempers began to flare at 13:30 between the benches during a line change, just a hint reminiscent of the 150-penalty-minute affair these two clubs had on October 19, 2019.
On the resulting Eagles push, Julien Nantel threw a shot on net that deflected in front of Ryan Wagner on the doorstep of Milwaukee netminder Troy Grosenick. Wagner quickly collected the puck and put it past the left side of Grosenick for his fourth AHL goal of the year. The goal gave Colorado its first lead of the weekend against Milwaukee.
The Admirals picked up the offensive chances after Wagner’s tally, engaging in another scuffle after the whistle that incurred penalties from both teams. On the resulting power play, Wagner was at it yet in front of Grosenick, this time tapping in a pass from fellow Utah Grizzlies call-up Griffen Molino at 18:05 of the opening frame.
With the two Wagner scores, Colorado began period number two with a 2-0 lead. Both teams came out of the locker room trading chances, but Milwaukee was the one getting actual pucks on net, leading the period’s SOG total 7-0 after just two minutes of play.
The Admirals’ persistence eventually paid off. On an uncontested shot from the right wing, Milwaukee winger Zach Magwood had the benefit of a Colorado defender unintentionally screening Eagles netminder Hunter Miska. Netting his first goal of the AHL season, Magwood’s tally brought the Ads back within one at 7:20 of the middle regulation frame.
The rest of the second segment of play was filled with scrappiness from both sides and also included a waved-off Eagles goal. Milwaukee’s Ben Harpur and Colorado’s Sheldon Dries received misconducts for continuing altercation at 11:46 of the second after a scrum behind the Eagles net. Prior to that, Colorado centerman Shane Bowers had his initial goal disallowed at 10:29 of the second due to Grosenick being interfered with.
Heading into the final period, the Eagles seemed a bit on their heels, lacking the offensive effort that propelled them earlier on in the game. The Admirals rattled off four shots on net until Colorado mustered their first at 5:31.
Miska continued his outstanding evening throughout the frame, turning aside Milwaukee chances from both in close and the point. To their credit, the Eagles did a phenomenal job keeping the Admirals skaters away from the net pretty much all game, especially after all four Milwaukee goals in Saturday’s matchup came in close from the slot.
As the third progressed on, Milwaukee’s desperation increased. With about four minutes left, the Admirals would not relinquish Colorado’s zone for a solid two minutes of game time. When the Eagles did finally clear their end and head over for an offensive opportunity, it was Colorado defenseman Dan Renouf that had his wrist shot deflected in by forward Sheldon Dries for the back-breaking score at 18:03. An empty net and extra skater for Milwaukee could not yield any goals, giving the Eagles the 3-1 victory to split the weekend with the Admirals.

Colorado center Sheldon Dries leads the celebration line for the Eagles after scoring an insurance goal with less than two minutes left in regulation against the Milwaukee Admirals on Sunday. Photo Credit: Ashley Potts / Colorado Eagles

Colorado goaltender Hunter Miska was dialed in and focused Sunday afternoon, saving 48 of 49 shots directed his way en route to his 14th win of the season. Returning from a short call-up with the Colorado Avalanche, it was Miska’s first start with the Eagles since February 15. His 48 saves on the night was a season high, going for 40+ saves only two other times this year (43 in a shutout against Bakersfield on November 15; 40 in a loss to San Diego on December 7). Miska has also won eight of his last nine starts.

“We have a lot of guys from Utah in this locker room right now,” said Wagner. “We definitely follow the scores down there. When they get the win, it’s a good feeling. And when we get the win here…coach mentions it, we’re just a hard-working team. Some nights we may not have all the skill, but we’re going to work hard.”

Forward Griffen Molino has been with the Eagles since February 21. He finds it impressive how well the Utah players have fit right in with Colorado the past few weeks.

“Coming into a place where most of this group has been together all year, some have spent time with the Grizzlies. I’m relatively new, but still kind of feel like the group is coalescing at the right time. It speaks a lot about a team when you get new guys in the locker room and still find a way to get a win.”

The Eagles continue their six-game homestand when they host the Ontario Reign Friday, March 6 and Saturday, March 7 (7:05pm MST). Colorado will finish their home stretch against the Central Division’s Texas Stars on Tuesday, March 10 and Wednesday, March 11 (7:05pm MDT).
Follow C.C. on Twitter for live, in-game coverage and various news & notes regarding the Colorado Eagles! Don’t forget to follow The Sin Bin on Twitter and Facebook for all additional AHL, ECHL, and SPHL minor league hockey news and insights!