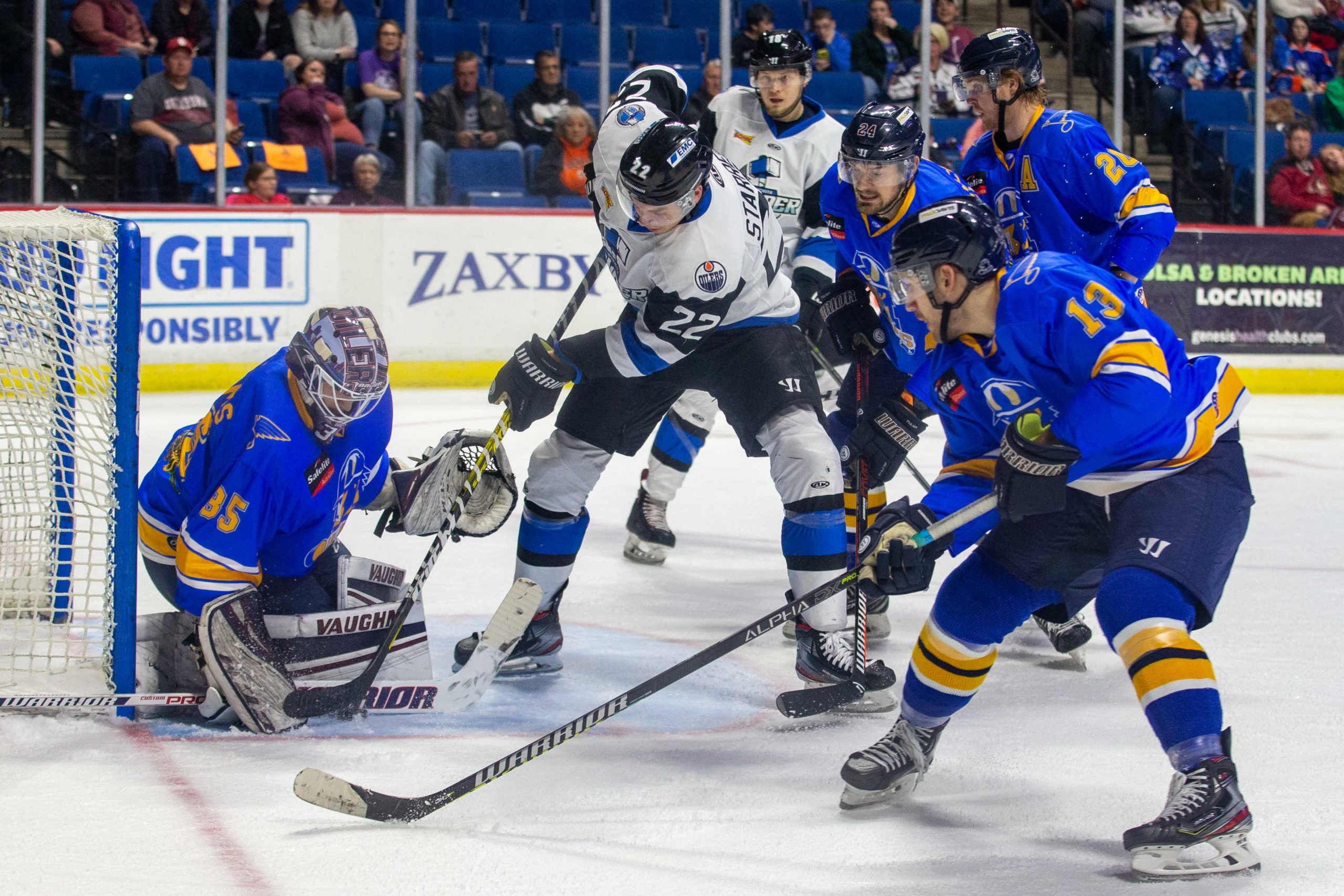 TULSA, Okla. – It took all of fifteen seconds off the opening puck drop for the Wichita Thunder to snuff out any momentum the Tulsa Oilers had from their previous night’s 6-3 home victory on Saturday night.

TULSA, Okla. – It took all of fifteen seconds off the opening puck drop for the Wichita Thunder to snuff out any momentum the Tulsa Oilers had from their previous night’s 6-3 home victory on Saturday night.

Spencer Dorowicz‘s early goal set the tone for the game when he shoved the puck through Oilers goalie Devin Williams. It had the overall effect of knocking his team off the rhythm they had on Friday night, and it extended throughout the remaining 59:45 in the game. Dorowicz had the only goal in the first period, and goalie Evan Weninger easily handled the Oilers 16 shots in the frame.
It was Tulsa’s designated “Teddy Bear Toss” game this holiday season, and Josh Wesley had the 5,157 fans hurling various stuffed animals onto the BOK Center ice surface after he tapped in a J.J. Piccinich shot to pull the Oilers even with Wichita less than four minutes elapsed into the middle frame. But, less than a minute later, Ostap Safin surged the Thunder back into the lead with a power play blast past Williams. Cam Knight pulled Tulsa even for the second and final time when he slipped the disc through Weninger just a second past the midway point of the game.
After that, it was all Wichita. Jason Salvaggio top-shelved a shot past Williams near the second period’s end for another go-ahead goal for the Thunder. Brendan De Jong netted a goal to extend the Wichita lead to two goals, and Safin added an empty net tally to close things out.
It was surprising how the early goal by the Thunder had Tulsa so out of sorts on Saturday night; though taken as a whole, they didn’t play that bad a game.
The Thunder were a lot more prepared, it seemed, and they appeared to be even better prepared than they were on Friday. The goals Tulsa scored were impressive, but their flow seemed off-kilter in comparison to Friday. In all, the game was reflective of the season the Oilers are having thus far, leveling out in the second game of a series instead of continuing the attack patterns and rhythm of the previous night.
In net, Williams made 27 saves of 31 shots and Weninger 41 out of 43. Special teams saw both teams go 1-for-3 on the power play.
The Oilers and Thunder will face off again for the final game of the three-game series on Sunday afternoon.
Follow both Rich and Cameron Turner on Twitter for live, in-game updates and all other news and notes concerning the Tulsa Oilers! Don’t forget to “like” The Sin Bin on Facebook for all additional AHL, ECHL, and SPHL minor league hockey coverage!