GREENVILLE, S.C. – The Greenville Swamp Rabbits return to the Kelly Cup Playoffs after a four-year hiatus, led by ECHL Coach of the Year candidate Andrew Lord, who is no stranger to championship hockey. On the other side, Fuel head coach Doug Christiansen is making his third consecutive Kelly Cup Playoffs, first with the Indy Fuel. Interestingly, the Fuel are looking for their first-ever Kelly Cup Playoff win.

This matchup is a tale of two seasons. For the Swamp Rabbits, their season got off to a scuffling start, earning multiple overtime and shootout losses, while not putting many wins on the board. That flipped once the calendar turned to springtime, and the Swamp Rabbits hopped into the playoffs with a 7-2-1-0 mark in their final ten games.

For Indy, the Fuel got off to a red-hot start, but scuffled in the back half of the season, largely due to call-ups and an unstable lineup. That said, the final 10 games of the season were good to the team from Circle City, going 6-3-1-0 down the stretch.

Indy won the season series 4-1-0-0, with all of the games being played at Indiana Farmers Coliseum.

Fuel forward Matt Marcinew led the Fuel in goals (4), assists (5), and points (9). Netminder Dan Bakala managed to hold the Swamp Rabbits to two total goals in his starts (2-0-0-0), including a shutout.

On the Greenville side, Garrett Thompson led the team in assists and points (4). Candidate for ECHL Goaltender of the Year, Ryan Bednard, went 1-1-1-0 against the Fuel, but allowed 12 goals on 94 shots faced over two games (.872 save percentage). 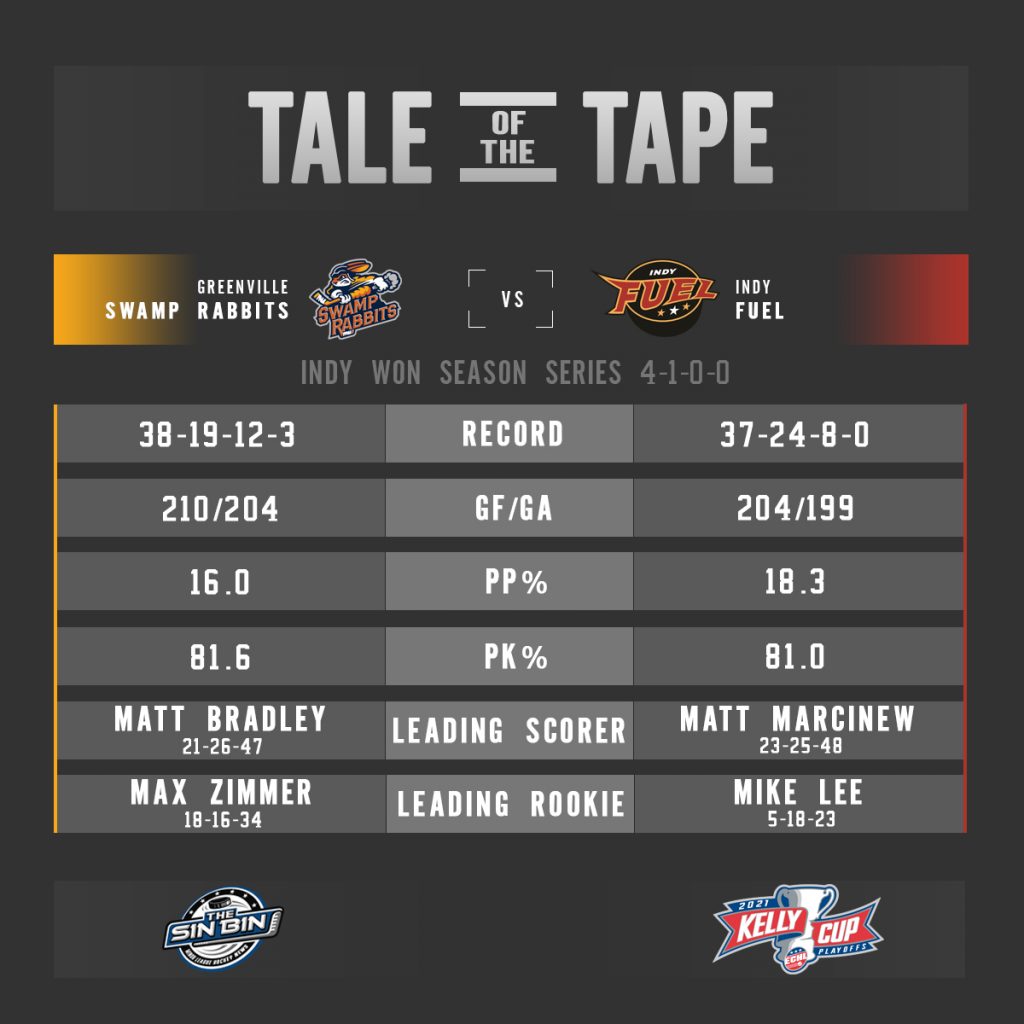 Ryan Bednard has been the backbone of the Swamp Rabbits all season, and he’ll need to have better performances against the Fuel than he did in the regular season.

Finally, the Swamp Rabbits special teams will have to play better in this series. The Fuel lit the lamp seven times on the man-advantage during the season series.

After leading the league in goals at one point during the season, Nic Pierog has nine goals in the Fuel’s final 36 games of the season, including two in the final three games of the regular season. The Fuel will need to have the offensive depth carry them to the finish line in this series.

The Fuel has one of the best 1-2 goaltending combos in the ECHL, with Bakala and Billy Christopoulos, and they will cause fits for the Swamp Rabbits in this series.