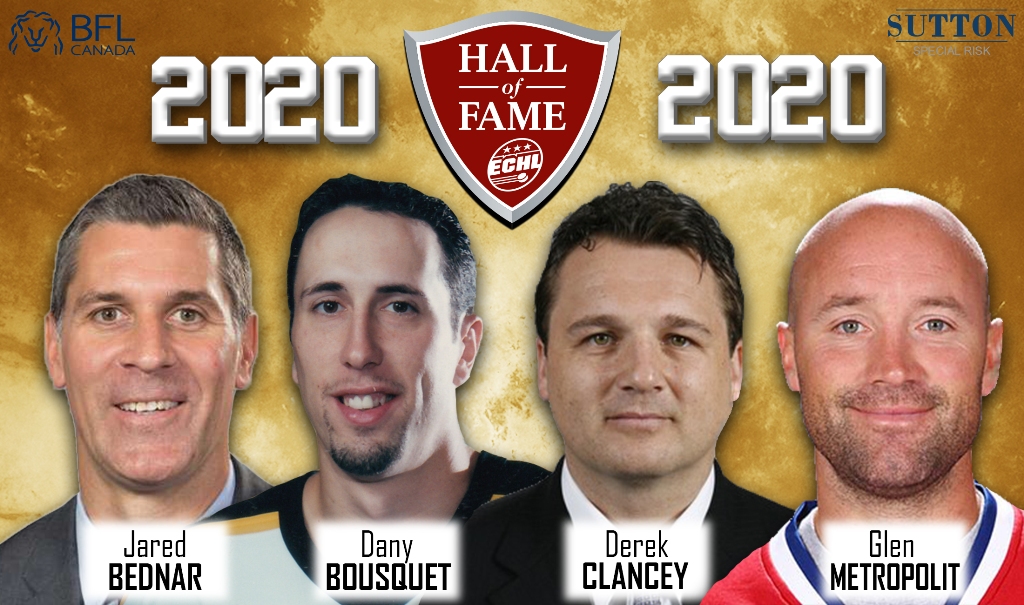 PRINCETON, N.J. – The ECHL announced on Monday that the 2020 inductees for the ECHL Hall of Fame are Jared Bednar, Dany Bousquet, Derek Clancey, and Glen Metropolit.

“This is a really special class of inductees that have dedicated their life to hockey and made their mark on the ECHL,” said ECHL Commissioner Ryan Crelin. “This 13th induction class embodies the role of our League in the development of hockey talent.”

Jared Bednar had a 15-year association with the ECHL as a player, assistant coach and head coach. He was the first person to win three Kelly Cup titles, capturing titles as a player with South Carolina in 1997 and 2001, and one as the Stingrays’ head coach in 2009. A rugged defenseman as a player, he suited up in 434 career games with Huntington and South Carolina, totaling 173 points (43g-130a) and 1,210 penalty minutes. After retiring following the 2001-02 season, he joined the Stingrays’ coaching staff in 2002-03, and was named the team’s head coach prior to the 2007-08 season. In two seasons as South Carolina’s head coach, he went 89-45-9, leading the Stingrays to the 2008 American Conference Finals before winning the Kelly Cup title the following season. Bednar led Lake Erie to the American Hockey League Calder Cup championship in 2016, joining Bruce Boudreau as the only coaches to win both an ECHL and AHL title. He is currently in his fourth season as head coach of the National Hockey League’s Colorado Avalanche.
Dany Bousquet put up an impressive 550 points in just 389 career ECHL games over six full seasons with Birmingham and Pee Dee. He took the league by storm in his rookie season, capturing ECHL Rookie of the Year honors, being named to the All-ECHL Second Team and finishing third in the league scoring race, with 107 points (54g-53a) in 68 games with Birmingham. He scored at least 35 goals in each of his six seasons, earned a spot on the All-ECHL First Team in 2000-01 and was named to the ECHL All-Star Game in 1998, 2000 and 2001. Bousquet ranks 10th in ECHL history with 254 goals, is tied for 16th with 550 points and is 30th with 296 assists.
Derek Clancey spent all but 50 games of his 441-game professional career in the ECHL, totaling 524 points (157-367a) over eight seasons with Winston-Salem, Erie, Toledo, Columbus and Chesapeake. He is tied for seventh in league history in assists while ranking 23rd in all-time points. He is tied for the most assists in a single game in ECHL history, recording seven helpers for Columbus on Jan. 13, 1996 against Johnstown. After completing his playing career following the 1998-99 season he immediately joined the coaching ranks, and went on to compile a 180-136-42 record in six seasons with Jackson and Reading, advancing to the Kelly Cup Playoffs in each season. Clancey is in his 13th season in the front office of the NHL’s Pittsburgh Penguins, and prior to this season was promoted to the club’s director of player personnel.
Glen Metropolit played his first two professional seasons in the ECHL, tallying 61 points (30g-31a) in 58 games with Nashville in 1995-96 and adding 82 points (35g-47a) in 54 games with Pensacola the following season. After spending the next two seasons in the International Hockey League, he made his NHL debut with the Washington Capitals during the 1999-00 season and went on to record 159 points (57g-102a) in 407 career NHL games with Washington, Tampa Bay, Atlanta, St. Louis, Boston, Philadelphia, and Montreal. Metropolit also spent extensive time in Europe, appearing in 458 career games in various leagues in Switzerland, Germany, and Austria.
The 13th ECHL Hall of Fame class will be enshrined on Tuesday, January 21 at the ECHL Hall of Fame Dinner, which will be held at the Drury Plaza by Broadview Hotel in Wichita, Kansas. The ECHL Hall of Fame is open around the clock online at ECHLHallOfFame.com, as well as being recognized at the league office in Princeton, N.J. and in the ECHL section at the Hockey Hall of Fame in Toronto, Ontario.
Be sure to follow @SinBinNews on Twitter and “like” us on Facebook for all the latest news ahead of the 2020 ECHL All-Star Classic!