WICHITA, Kan. – It is hard to believe, but we’ve made it to the midway point of the 2020-21 ECHL season. This edition of ECHL Headlines will take a look at the major storylines at the half-way mark of the season, dole out some awards, and offer up our playoff predictions that are sure to go wrong.

We’ll also hand out some weekly “hardware,” too.

There have been quite a few storylines that have evolved over the season’s first half, but here are the three that have stood out to me:

I’ll admit, I was a skeptic when I saw the league would try a 72-game schedule. I thought the move was reckless and would end up with potentially another shutdown, albeit brief, of the league. Luckily for the ECHL, the waiter is on his way over to serve me a gigantic order of crow.

So far, every team has been impacted by COVID to some extent or another, and while a few have had to postpone games for quarantine/virus issues, there has been no significant league-wide impact by the virus. At the time of this article, the league has added one person to the Commissioner’s Exempt List (aka COVID list) in the last nine days, so the “bubble” concept is working. Further, there has been a mentality among teams that employees/players do not want to be the one to bring COVID into the group, which adds a further check and balance to things.

As we continue to see mass vaccination sites pop up and the eligibility for those to get the vaccine become more open, it is likely we will see fewer players added to the list as the season reaches its conclusion in early June. A league GM told me last week they are exploring reducing or eliminating COVID testing altogether, a sign that “herd immunity” has infiltrated the league. It would save teams money, but it would be nice to see that continue in some fashion, especially if the teams will be receiving contracted players later in the season. Which brings me to number two…

Lack of AHL/NHL Contracts in ECHL:

Honestly, we should have seen this coming. If the NHL was going to have “taxi squads,” it would only make sense that the AHL clubs would hoard their players, too. The goal with the “taxi squads” are to have enough players on a roster to ensure that games are played should there be a rash of injuries or a COVID outbreak. I’m going on record here and saying the “taxi squad” concept is awful and it cannot go away soon enough. There is no value in having 20 forwards/10 defensemen/4 goalies on a roster with the goal of developing them in game situations.

But, there is hope for ECHL fans.

If your team lost players to the AHL, there is a chance they will come back down for the final push of the season and playoffs. The deadline for that to happen is May 16, which would give ECHL teams about two-and-a-half weeks with the players (depending on quarantine protocols). There is a chance it could happen sooner, too, as AHL teams sign collegiate players and we see players get recalled from overseas.

Of course, the wild card to all this is the potential for in-division playoffs in the AHL. Bottom line, everything is still in sand.

If you thought that 13 of the 14 teams in the league would be over .500 with very few AHL/NHL contracts in the lineup at this point of the season, then we need to grab a beer and chat. The caliber of play in the league this season has been incredible, each opponent has been tough, and there have been no off nights. We’ve seen races tighten up across the league, and as the end of the season approaches, only figures to get more intense.

As a fan, there is a lot to like about the way the schedule has been set up this season and how the playoff field will be decided. The three and four-game sets add the element that what happens in one game carries over to the next, the game-to-game adjustments for coaches, and the battle of wills by the time the third or fourth game arrives.

As we’re going to see with the playoff races, each point is going to matter immensely in the percentage of the overall points. Most importantly, it gives teams who would be out of it on points, a chance to negatively impact the standings each night (see, Wheeling taking a game over Wichita last weekend, or South Carolina winning three straight over Fort Wayne) and see their hopes for getting back into contention rise. I hope the scheduling formula and points percentage stick around after COVID passes.

In the words of Jim Ross, this playoff race is going to be a slobberknocker. Buckle up!

At the midway part of the season, there are some serious candidates emerging for the league’s end-of-season awards. I’ll offer my take on who wins, then at the end of the season, I’ll match them up with what is announced by the league:

ECHL MVP: Anthony Beauregard (Wichita) – My measuring stick for the MVP award is not the league leader in points (which Beauregard is,) but rather what happens to the team if “player x” is hurt or leaves? The Thunder have had zero help from their primary AHL affiliate to-date this season, and the four players that were sent down by Toronto have come and gone. The result, the emergence of a line that has carried the Thunder to their best ECHL start through 37 games, a line led by Beauregard. Since January 5, he has been red-hot, piling up 40 points in the team’s 35 games.

Coach of the Year: Doug Christiansen (Indy) – The Fuel finished the first half of the season with a 24-10-2-0 mark, the best in franchise history. At present, they are in a position to host playoff games in the first round. Christiansen has amassed a good veteran nucleus to go with talented players assigned by Rockford and Chicago. Dan Bakala and Billy Christopoulos are the best 1-2 netminding tandem in the ECHL and will serve Indy very well in the playoffs. Get ready for a deep playoff run, Fuel fans.

Most Outstanding Goaltender: Jake Hildebrand (Florida) – After putting up decent numbers in his previous ECHL stops, Hildebrand is having a career season on the southwest coast of Florida. Through 19 starts, he’s 13-3-0-2, with a 1.97 goals against average, two shutouts, and a .936 save percentage. He ranks third in wins (13), fourth in minutes (1128), first in save percentage (.936), and fourth in saves (545).

Most Outstanding Defenseman: Les Lancaster (Allen) – Lancaster has been a true game-changer on the blueline so far this season for the Allen Americans. Of his defensemen-leading nine goals, seven have been the game’s first goal or a game-winning goal, two have come on the man-advantage. Further, he is a puck-distributor, with 16 helpers, good for fourth among league defensemen. You can look at his -1 and bring that up, but I’ll remind you that plus/minus is a very flawed stat.

Rookie of the Year: This may be the toughest category of all to handicap. My initial thought process was to give it to Joe Garreffa, but I want to see how he does with Orlando the rest of the season (he had a good thing going in Allen before San Jose moved him and four other players to Orlando). But, I’m going to go with Jay Dickman from Wichita. Consistently this season, Dickman has been near the top of the rookie scoring race, and has made his presence known in games, with six of his 11 goals coming as a first, insurance, or game-winning goal. He’s been paired with Beauregard and Stefan Fournier this season, which has helped his game significantly.

We’ll check back on those picks in mid-June.

Playoff Predictions Sure to Go Wrong:

So, here we go. After the dust has settled on June 5, here are my predictions for opening round playoff matchups in each conference, including one bold prediction. 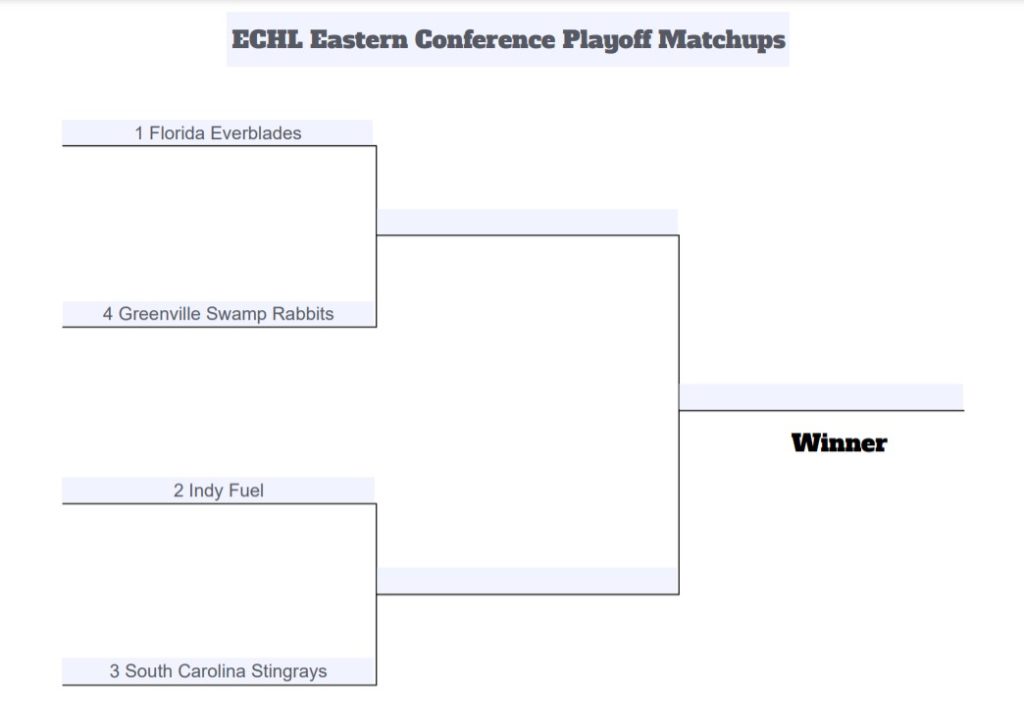 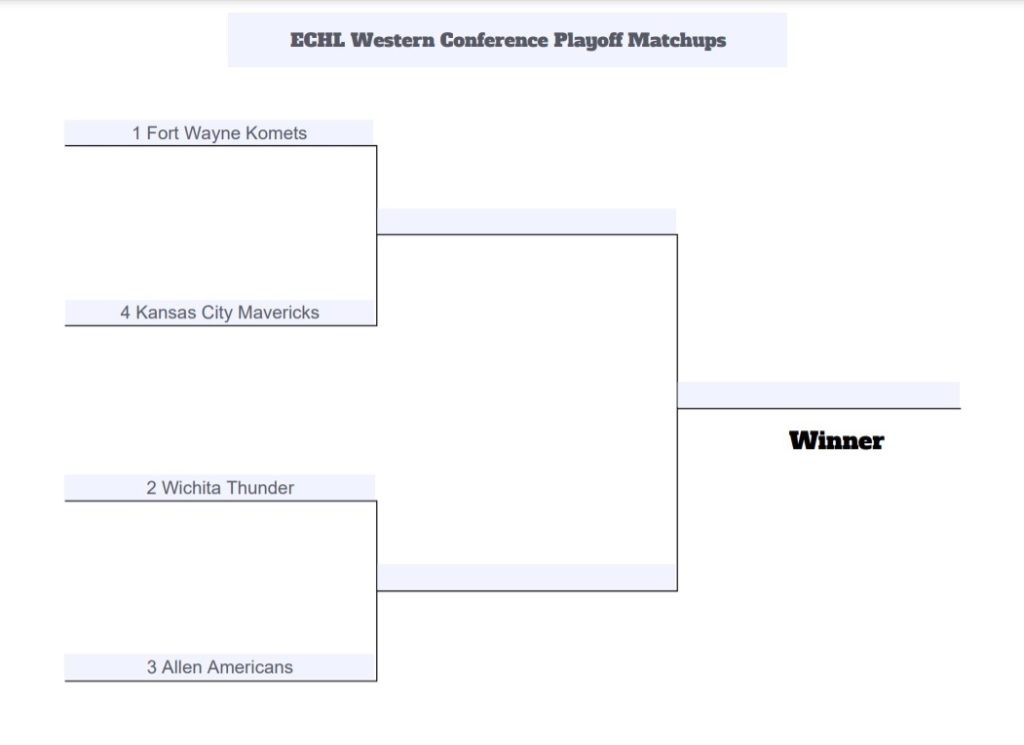 Bold Prediction: The Kansas City Mavericks get Giorgio Estephan back from AHL Stockton/Calgary, and combined with the offense in place, the Mavs claim the fourth playoff spot. Don’t sleep on Tad O’Had‘s team.

Anthony Beauregard (Wichita): Beauregard scored two goals and added seven assists for nine points in four games last week. He picked up two assists in a 3-2 win against Indy on Wednesday and in a 3-2 victory at Wheeling on Friday. After being held off the scoresheet on Saturday, he set a career-high with five points (2g-3a) in a 6-4 win against the Nailers on Sunday.

Alex Dubeau (South Carolina): Dubeau went 2-0-0 with a 1.00 goals-against average and a save percentage of .974 in two appearances against Fort Wayne last week.  The 26-year-old made 38 saves in a 2-1 win on Friday and turned aside 37 shots in a 5-1 victory on Saturday. 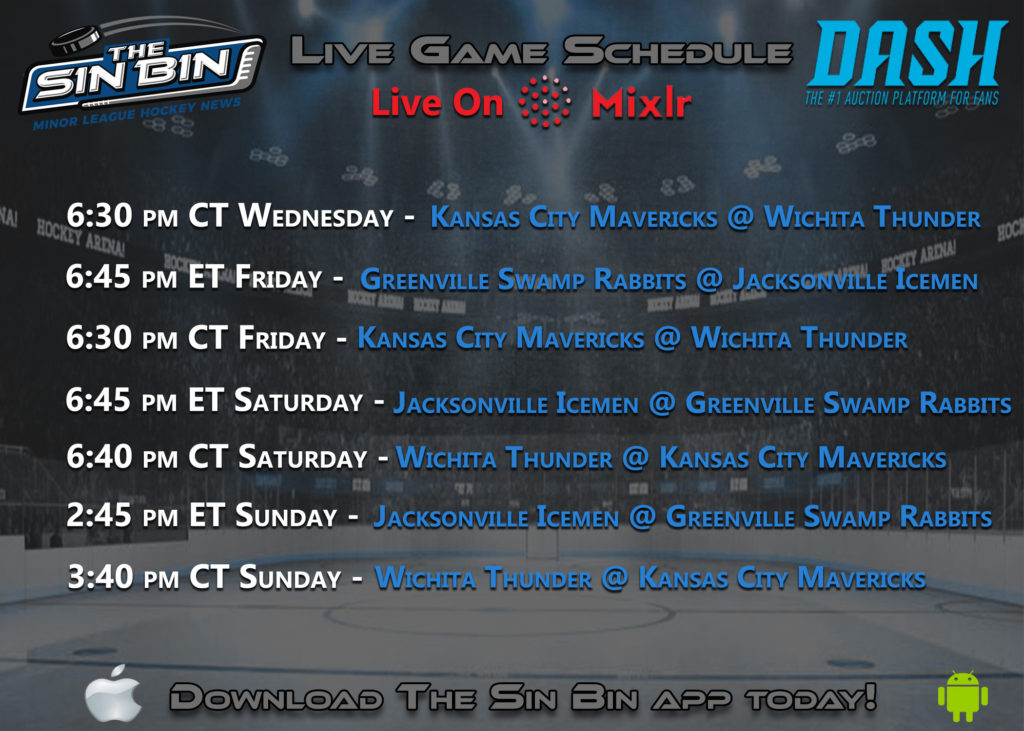