WICHITA, Kan. – As we approach the midway point of April, the playoff races are starting to intensify. This edition of ECHL Headlines pays homage to team defense and the men in between the pipes, the eyes of the ECHL focused on what one man is going to do, and we’ll look at the standings as we start the 19th week of the ECHL season.

We’ll also hand out some weekly “hardware,” too.

Shutouts, Get Your Shutouts:

A lot has been made about the talent level in the ECHL this season, and rightfully so. Regardless of how the rest of this season shakes out, we can come away from it saying these were some of the most talented teams in league history.  It’s also been a year when team defense and netminding have come to the forefront.

Entering play this week, there have been 41 shutouts in 321 games — roughly one shutout every 12 games this season. It’s hard to compare year-over-year (thanks again, COVID), but shutouts happened with slightly less frequency last year than what we are seeing them happen at this season.

One reason for that is teams playing multiple-game sets against each other. A goaltender watching could pick up on tendencies on the opposition, and use them to his advantage the next night. The other, is the adjustment game-to-game teams make. COVID has put an emphasis on video work at this level, which makes this much easier to accomplish.

Allen, Florida, and Kansas City lead the way with five shutouts each, while Utah brings up the rear with zero. The Utah result is surprising, especially when you consider some of the netminders who have/are playing there this season: Garrett Metcalf, Kevin Carr, Peyton Jones, Evan Buitenhuis (has two shutouts himself with Wichita), Parker Gahagen, Brad Barone, and Trevor Gorsuch.

Not for nothing here, but there’s a correlation between teams who have multiple shutouts and where they’re at in the playoff race. Of the teams who have two or more shutouts (Allen, Florida, KC, Rapid City, Wichita, Indy, Orlando, Tulsa, and Fort Wayne), six are currently in playoff spots.

If you are a fan of the ECHL (you are if you’re reading this,) you probably perked up when Barry Janssen wrote last week about the contract status for Allen Americans head coach, Steve Martinson, who is in the final year of his deal in Allen. To date, Martinson has not been given a contract extension, and he told Janssen this:

“I don’t want to be wondering in July what I am doing. Right now, I want to climb the standings and have other organizations take notice of the entertaining brand of hockey we are playing.”

“If I am going to leave, next season is probably the best time to do it with 13 teams on the sidelines watching.”

Consider this. Since Allen had their four contracted players from San Jose reassigned to Orlando on March 16, the Americans have gone on a 9-3-1-1 run. For most teams, losing four players in a single setting is a hit that would stun them, not Allen, though. Martinson has proven time and time again he is a master recruiter to the AA level and has connections all over the place.

More to the point, Martinson has made Allen a league power and been the steadying force through a lot of tumult off the ice. My TSB colleague, Matthew Will, said it best when he said the ECHL needs Martinson and his brand of hockey. It is entertaining, develops players,  puts butts in seats, and most importantly, it wins year in and year out.

I have been pessimistic for some time and remain so that Martinson returns to Allen next season. There are other spots where he could go and make an instant impact, but in my mind, the one that makes the most sense is the new Iowa franchise. It’s a tidy three-hour drive from home, he has established relationships with likely affiliates the Iowa & Minnesota Wild, and he knows the organization will be run professionally, with former ECHL Commissioner Brian McKenna and owner Dean MacDonald at the helm.

As someone who respects Martinson and the job he has done, it is baffling to me that he hasn’t been given the chance to set his own timetable on when he will leave. Coaches who win your organization multiple championships and builds a program to prominence usually get to call their own shots (see Krzyzewski, Mike).

Without a doubt, a major storyline for the remainder of the regular season and into the early stages of the offseason will be what Martinson decides and if/where he ends up.

In the East, the first two spots looked to be locked in. The battle is four teams for two spots, and while Wheeling has played better of late, it’s likely too little, too late for Nail City this season. 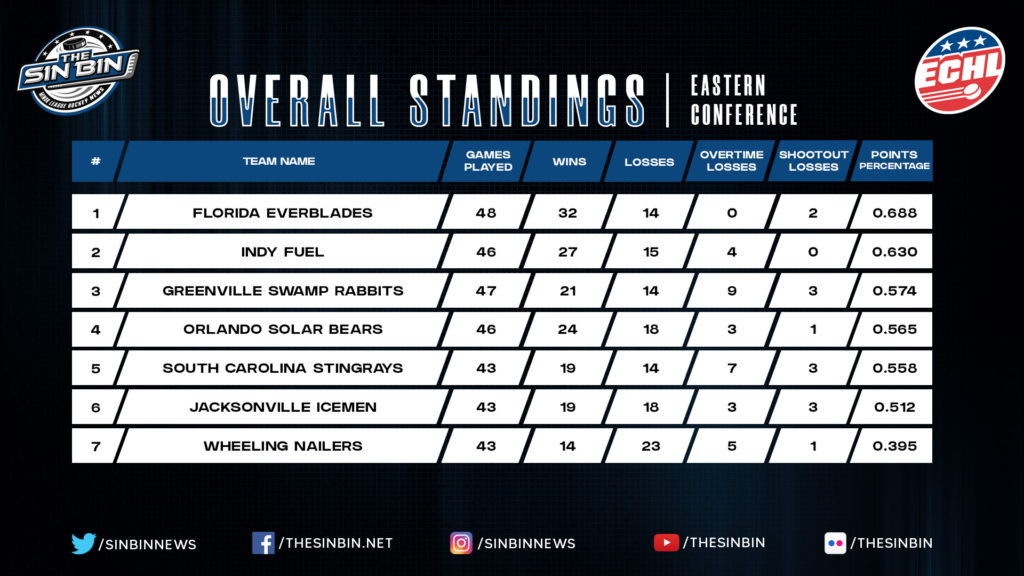 Out west, it feels like there is a battle for the top spot among three teams (Allen, Fort Wayne, Wichita,) Utah doing just enough to hold on to a spot, then the battle to stay out of the basement. Allen has the top spot over Wichita because of their head-to-head record this season (Allen leads 3-2-1-0). 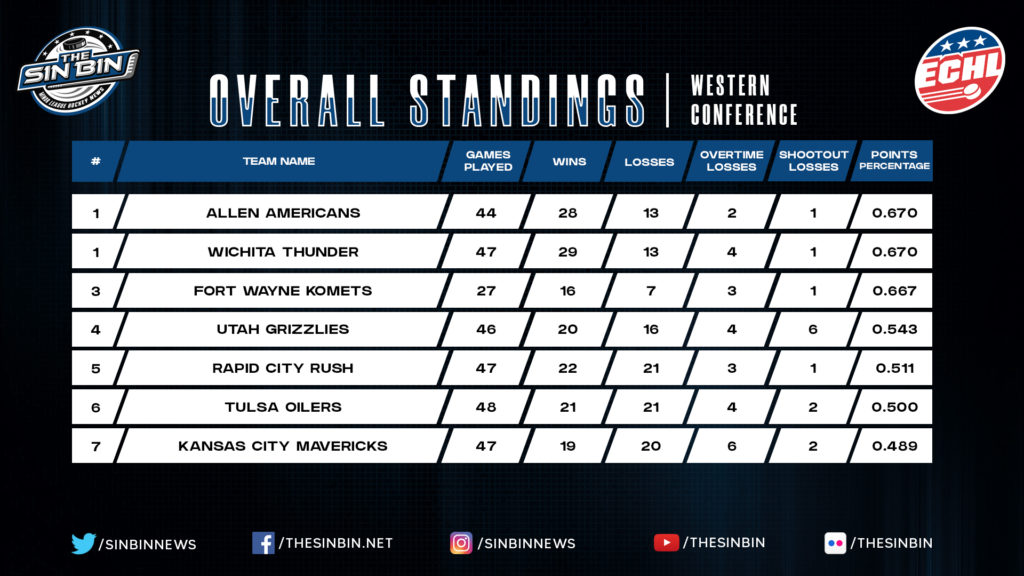 Corey Mackin (Allen): For the first time in his career, the Allen Americans forward has been named ECHL player of the week. The third-year pro scored three goals and added three assists (six total points) in four games last week as the Americans swept Kansas City. For the season, Mackin has 19G, 21A, and 40 points. 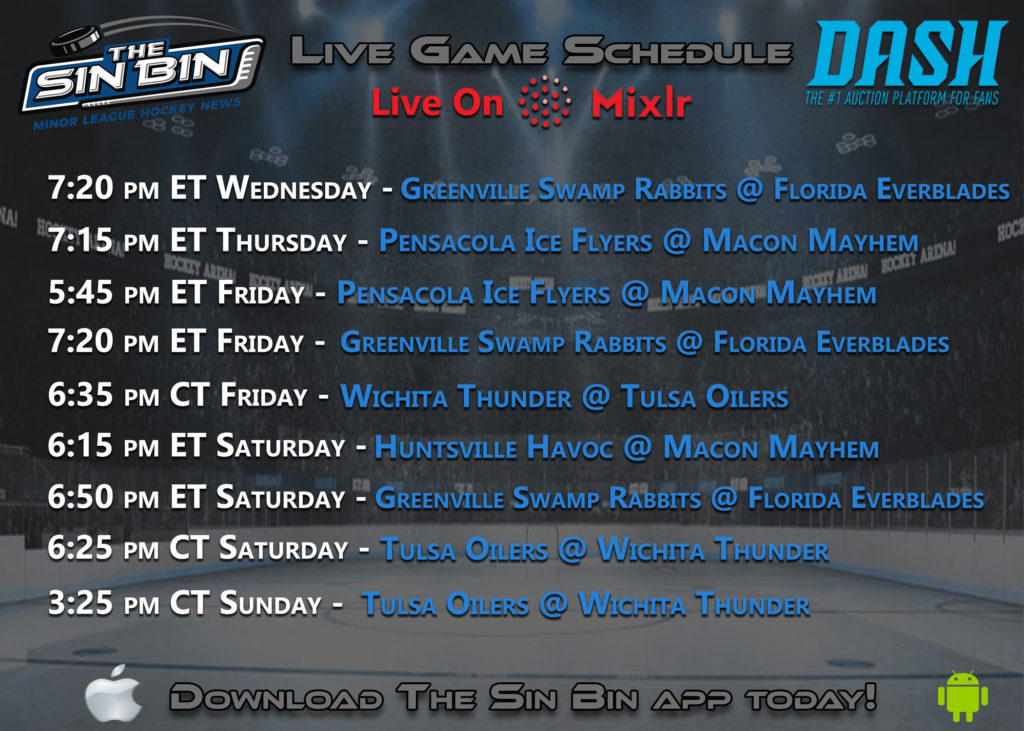