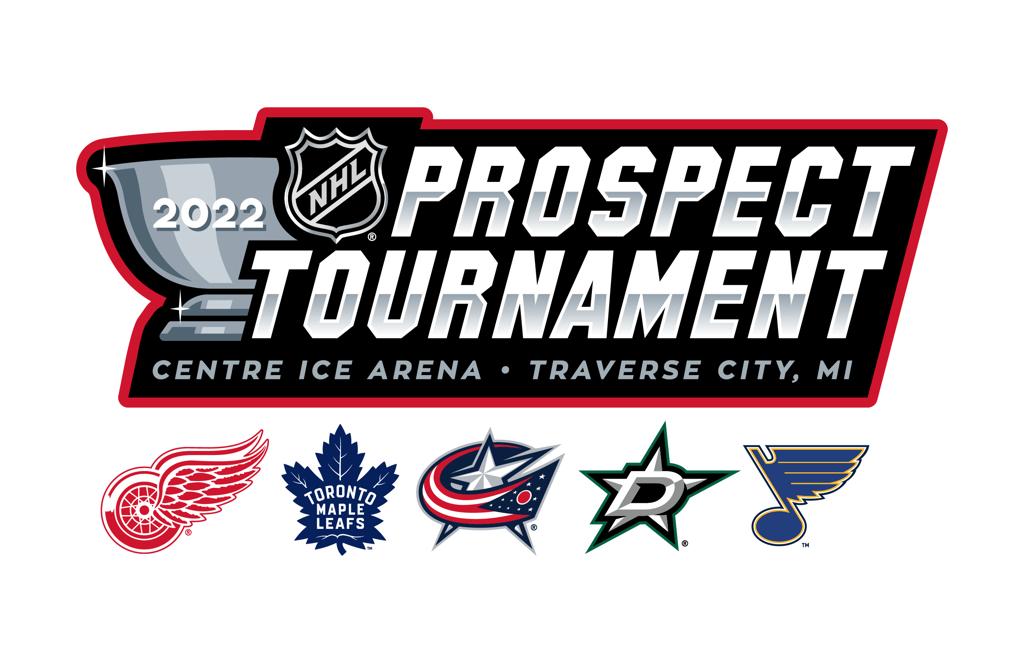 Fans, scouts, NHL executives, media, and others flocked to Centre Ice in Traverse City for an official kickoff of this season.

While most eyes were focused on the potential future NHL talent and stars of tomorrow, at least two people focused on a different group: the officials. For the 10th consecutive tournament, the ECHL is providing the officials for the tournament. At the head of the group is ECHL Manager of Officiating Operations, Stephen Thomson. Alongside is a representative from the NHL to help give feedback and make adjustments, if needed, between periods.

Thomson took some time between the day one matchups (St. Louis Blues/Columbus Blue Jackets and Toronto Maple Leafs/Dallas Stars) to talk to Field Pass Hockey. We reviewed this year’s crop of NHL Prospect Tournament officials and changes coming to the ECHL for the 2022-23 season.

A Different Kind of Team

Every path to becoming a professional hockey official is unique. For this year’s crop of officials, that is holding very true. Riley Brace, Antoine Bujold-Roux, Jarrett Burton, Brandon Grillo, Tyler Hascall, John Lindner, Quinn Schafer, and Rocco Stachowiak got the invite this year as they continue on their officiating careers. For ECHL fans, Brace and Burton’s names may sound familiar.

Brace (130 games) and Burton (118 games) have a combined 248 games of playing experience in the ECHL, mainly with the Wheeling Nailers.

After playing in Norway for the 2021-22 season, both players have their sites set on a new kind of team. The officiating crew.

According to Thomson, Brace and Burton are here in Traverse City to “give officiating a shot.” With a wide smile, he recalled his days as an official, calling Nailers games:

“It’s funny. I go back to when I was on the ice with them back in 2016. They were planning for Wheeling, I think on the same line. Now they’re just trying to see if officiating is something for them. They were both at the NHL’s Officiating Combine for a little exposure. This is all to see if this may spark a little interest and continue their career here.”

In their first games at the Tournament, Brace and Burton looked right at home. So, I think it’s safe to say if officiating is something the pair want to do; there’s absolutely a potential for them to make it happen on the pro level.

Unsurprisingly, some changes will be in force for the ECHL’s 2022-23 season. Though, Thomson urged that they are not reinventing the wheel. He feels the game is in a really good place, so the need for a massive change isn’t there right now.

Last year, officials were enforcing a stricter standard on cross-checking. This was pretty much the standard across the National Hockey League (NHL) and American Hockey League (AHL) last season as well. This is to help keep expectations for players similar so they know what to expect regardless of the league they play in.

For this season, Thomson explained that enforcing that stricter standard would be the same as last season,  so transgressions won’t start to creep back in.

But, with every season, there is inevitably at least some change.

“This year, we changed the wording in our rulebook to allow the attacking center to choose if they want to go down first or second on a faceoff. Previously, the attacking center goes down second, regardless. The idea (behind this rule change) was: going down second’s an advantage, but not all centerman agreed. Some are like, ‘Well, I prefer to go down first,’ and now we’re going to give them that option. So now they’ll go into the dot and tell the linesman, ‘Hey, I’m first’ or ‘Hey, I’m second.’ It’s just one more opportunity to increase offense. We saw that when we elected choosing sides on certain situations as well. It’s just kind of continuing that in a really, really small sense and get a get a sample size to see what that looks like. But it’s something that we pushed forward that the other leagues didn’t.”

So, who decides on these rule changes? Deciding on changes to the rulebook has a process from suggestion to implementation. The bulk of the work comes down to the ECHL Competition Committee.

The Competition Committee is made up of representatives across all roles in the ECHL. Presidents, General Managers, coaches, players, and the league head office all get a say in what gets adopted or rejected.

Perhaps what’s even better about potential rule changes in the ECHL is that technically anyone can bring an idea forward. Whether it’s a new player or seasoned vet all the way up to league executives- all views are looked at.

The role of the competition committee, according to Thomson, is to review the rules already in place and suggestions brought forth.

“They’re the ones who review all the rules, hash it out, take it apart, and see if it’s something that we’d be interested in or not because we don’t want to change rules often. Quite frankly, there’s a lot of unintended consequences when you do things like that. So, you have to be very careful what rules you change and how they change, and what they’ll look like when they change the game.”

When a change is agreed upon within the Competition Committee, it gets sent to the Board of Governors. The Board will then vote on if that particular rule is something the ECHL will institute for the upcoming year.

Keeping Up with ECHL Play

Each year, like in other professional hockey leagues, the players in the ECHL are getting better and faster. That increase in skill and speed is something that Thomson and the league have noticed. For Thomsons’ part, he acknowledges that it’s becoming increasingly difficult for three officials (one referee and two linespeople) to call the game. In his words, expecting a single referee to call a game alone is “… setting the officials up pretty much to fail. We’re asking them to do something that’s pretty much impossible right now.”

Starting this season, the ECHL will implement a four-official system at 25 percent of their games. The 25 percent will be broken up evenly, so each team gets nine home games in that system. Thomson admits that if the personnel and finances were there, it’s something the league would’ve done quite some time ago.

Back to his comment on having the personnel- where are these referees coming from? If there’s a shortage, how will they staff these games? It turns out, those people are already in place without having to increase the number of officials on staff:

“We (the ECHL) generally carry about, on average, 30 referees. The only difference is some of the referees who have been with the ECHL for a long time but not really working very much, maybe five or six games a year; we replaced them with officials that are going to do 15 to 20 games a year. So, the number of officials stay the same, but the number of games each official skates increases.”

Finances are another point that the ECHL is looking at while getting this system off the ground. Therefore, “island” teams like the Iowa Steelheads, Utah Grizzlies, and Newfoundland Growlers will likely see back-to-back games where the four-official system is used. After all, it doesn’t make much sense (or cents) to fly an official out for a Friday game and then fly them right back out, only to return a few weeks later. Meanwhile, in cluster areas like the Fort Wayne Komets, Indy Fuel, Toledo Walleye, Cincinnati Cyclones, and Kalamazoo Wings, the league can move these referees around with better cost efficiency.

Thomson also said the league will try to balance the system, so no teams see an overwhelming amount of road games with four officials.

All things considered, the state of ECHL officiating is in a great spot right now. With Thomson at the helm, these officials are learning the ropes the right way, both on and off the ice. As for me? I personally want to check out their annual Wiffle Ball game. I hear it gets pretty serious.

Now, let’s look at the prospects that were on the ice for game one.

First up was the St. Louis Blues taking on the Columbus Blue Jackets. The Blue Jackets, coming off of a couple of solid drafts and an incredibly strong offseason (we’ve all heard the Johnny Gaudreau news by now), drew quite the crowd. Their prospects would go on to win 7-1.

But, it was preseason for everyone, including those operating the sound system at Centre Ice. After a slight delay and a booming “Leo!” (Columbus’ long-time anthem singer and the salute the home fans give him before each performance) that filled the awkward silence, the anthem and the game were underway.

What was evident from the start was Columbus was on a higher level than St. Louis. But to the Blues’ credit, Jake Neighbours and Mathias Laferriere were tenacious in the corners, not afraid to engage in a board battle, and were persistent on the puck. Laferriere especially showed good drive and easily could have tallied a couple of goals of his own- but the Columbus defense was beyond stifling. Hugh McGing drew the ire of the Jackets most of the afternoon, laying heavy hit after heavy hit. Theo Hill had the lone Blues goal, using his explosive play to capitalize on chaos in their zone.

On the flip side, fans of the Cleveland Monsters will be delighted to hear that Ole Bjorgvik-Holm is slated to be back in the Rocket Mortgage FieldHouse this season. He looks like a year back in the OHL seems to have done him good. He finished this match with two assists. Ultimately, the real standouts for Columbus were James Malatesta, Luca Del Bel Belluz, and Jordan Dumais. Dumais had a two-goal night while the three combined for three goals and three assists.

another look at the opening Dumais goal 😮‍💨 pic.twitter.com/o9GZ2rrsKk

After a refresh of the ice, it was time for the Toronto Maple Leafs and Dallas Stars to hit the ice. That one finished in Toronto’s favor: 6-2.

To start, this was a much more even match-up. It took a little while for players like Semyon Der-Arguchintsev and Nick Robertson to get in the game’s flow. But once they got going, Toronto never looked back. Der-Arguchintsev seems to have worked on his edgework, which he leveraged to create chances out of nowhere. Pavel Gogolev kicked off the scoring, sending home a slapper off a Max Ellis pass.

if Pavel Gogolev can create more chances like this one, he could be back as a full-time AHLer in no time. pic.twitter.com/HlxyPYdBYs

If the hockey gods allow Alex Steeves and Robertson to play on the same team at the same time this year, I would highly suggest they be linemates. They were quite the duo with astounding anticipation of where the other was on the ice. It will be a sight to behold on any level.

Matt Murray had a rough first outing for the Stars, looking frustrated by the third goal. A true highlight for Dallas came from Antonio Stranges. Even in the most chaotic battles for the puck, he maintained an almost scarily accurate read for where the puck was going. In traffic, he could find a teammate, no matter the pressure he was under.

I could go on and on about these games, but we are out of time and space for today.

Day two of the NHL Prospect Tournament gets underway at 3:00 p.m. Eastern. With the host Detroit Red Wings taking on the Blue Jackets. In the 6:30 game, Toronto and St. Louis will face off.