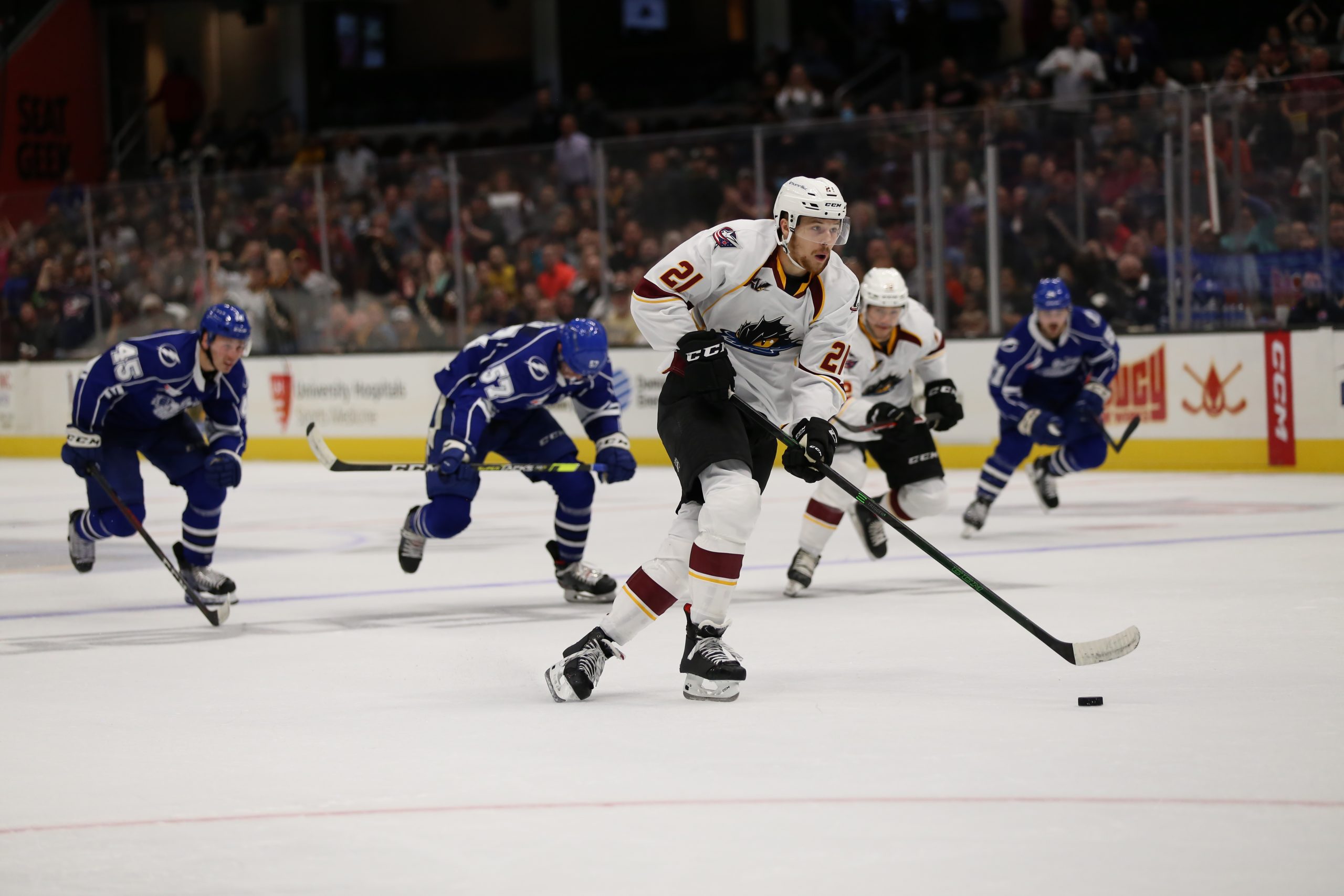 CLEVELAND – It’s probably more than reasonable to say that the Rocket Mortgage FieldHouse has had more than its fair share of emotional moments. From the highs of championship-winning games to the lows of heartbreaking losses, it has seen them all.

But, perhaps no night held the depth and complexity of emotion as that of Friday night. With the high of a brand new American Hockey League season, the energy was electric. Under it all, however, was a profound sadness and sense of loss as the crowd and team prepared to honor the late Matiss Kivlenieks.

The evening started as any other home opener does. First, there was all the standard fanfare of player and coach introductions, complete with a roar from the crowd.

Then came the video tribute and presentation of a memory box containing Kivlenieks’ game-worn jersey, which stood in the crease that he guarded for parts of four seasons spanning 2017-21. Underscoring the moment was the introduction of his family for a ceremonial puck drop, who, just 24 hours prior, was similarly honoring him with the NHL’s Columbus Blue Jackets.

Postgame, Monsters head coach Mike Eaves looked back on the moment and Kivlenieks’ legacy with the club,

“I think it’s different for everyone. I know last night watching the ceremony in Columbus, I was misty, and I was at home! And then Torts (former Blue Jackets head coach John Tortorella) on the show on ESPN, The Point- he had tears in his eyes when he was talking about him. I think everybody and you folks (the media) have gone through it on your own level; everyone deals with that a little bit different. The one thing for sure is that even though Kivi is not here with us, he was such a special lad that a piece of him is going to be around us all. That’s for sure.”

The Monsters looked to capitalize on the moment and the energy of the crowd. Defenseman Thomas Schemitsch almost looked to get the party started only 2:30 or so into the game, but the puck went just wide of Syracuse Crunch goaltender Max Lagace.

The game was a solid case of back and forth for both clubs in the opening minutes. There was minimal physicality, and you just had a sense that they were just getting a feel for the game.

But it would be Cleveland that would opening up the scoring at 5:53 with Adam Helewka finishing a long pass to a streaking Tim Berni who was making his Monsters debut.

That Tim Berni goal was perfection from start to finish! #SYRvsCLE
Clipped with @SporfieMoments pic.twitter.com/ICKxj91PnL

Then 1:26 later, Jake Christiansen extended the lead to two on a one-timer shot off a Tyler Angle feed.

The crowd was in fine voice and were urging their team on. With each goal, the decibels rose.

Syracuse was just struggling to get zone time. When they did manage to get there, players like Schemitsch and Christiansen kept them firmly stapled to the boards.

Then, if the Crunch could get away from the boards, they had someone like newly minted Monsters captain Dillon Simpson ready with well-timed and perfectly placed hits.

This had all the makings of a blowout victory.

Unfortunately, it all started to fall apart shortly after.

Teams can find massive momentum shifts off of many things in the game. Goals, saves, fights, penalties- they will take whatever they can get.

For the Crunch, it came in the form of a penalty by rookie Cole Cassels. He slashed the seasoned forward Gabriel Dumont, who in true veteran fashion didn’t engage and let Cassels get agitated enough that it drew the refs’ attention.

Two quick goals by Shawn Element (on the power play) and Charles Hudon tied the game at two and sent the teams to the first intermission with all the momentum in Syracuse’s favor.

For the second period, the crowd hoped to see some fight and bounce-back out of their boys in the white jerseys. They got the fight, that’s for sure. Unfortunately, the bounce-back left a bit to be desired when it was all said and done.

The tale of the second period was unfortunately mired in injuries for the Crunch roster.

A hard hit by Gavin Bayreuther on Hudon just 34 seconds in seemed to set the tone of the stanza. Hudon was in full stride along the Syracuse bench when Bayreuther laid the hit. He got caught up on the edge of the glass, which resulted in a lengthy delay to fix the glass and partition.

Another tale of the second was the lack of rebound control by Monsters goaltender Daniil Tarasov. Rebounds seemed to be the goal method of choice for the Crunch, as displayed here by Maxim Cajkovic.

Another rebound for Syracuse and Maxim Cajkovic capitalizes. Syracuse gets their first lead at 2:55 of the 2nd.
Cleveland trails 3-2#SYRvsCLE
Clipped with @SporfieMoments pic.twitter.com/JqCAIUJFrV

Another injury for the Crunch would come at 6:57. While Lagace attempted to stop a Helewka shot from the point, he seemed to hurt what looked to be his right leg. The only good news is was he was able to go off under his own power.

But the game was now tied back up.

And the Crunch would have to rely on rookie goaltender Hugo Alnefelt.

Alnefelt was more than ready for the challenge. 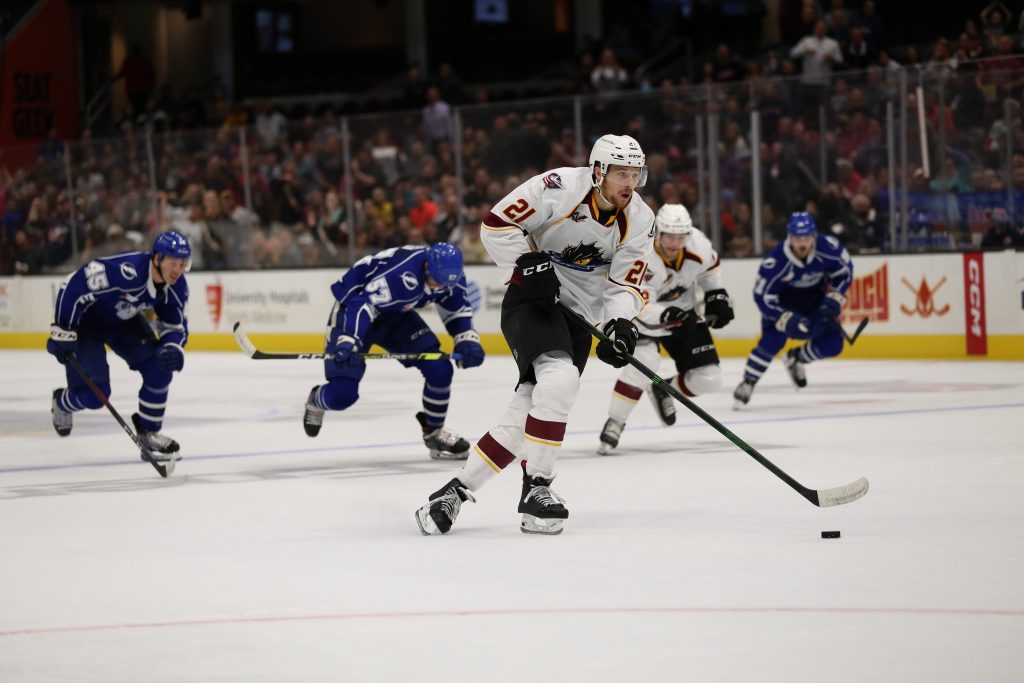 Cleveland Monsters forward Josh Dunne skates with the puck during a game against the Syracuse Crunch on Oct. 15, 2021, at the Rocket Mortgage FieldHouse. Photo credit: Alex Crail/Cleveland Monsters

We do have one other injury to talk about, and this one looked to be the most serious of the evening. While streaking down the ice on a rush, Otto Somppi got tangled up with Christiansen, who looked to be laying a hit. Somppi went awkwardly into the boards and had to be taken off on a stretcher. Luckily, he was sitting upright when he was taken off the ice, which was a promising sign.

Now, the Monsters were faced with a five-minute major penalty, which they killed. Remember what I said about momentum? You would think that this would energize them and be enough to get them over the hump.

Whether it was the rust of finally playing their first game since May or something else, we will never know.

When he regained the lead with a short-handed tally, Sean Day ensured that all the power stayed with Syracuse, sending the teams into the last third of the game with a 4-3 score.

Tarasov had an issue with rebounds all night, which led directly to two goals, including the 5-3 tally by Gage Goncalves.

It’s been a rough night for Tarasov and keeping rebounds under control.

Gage Goncalves extends the Syracuse lead to 5-3 at 3:58 of the third. #SYRvsCLE
Clipped with @SporfieMoments pic.twitter.com/a2HOstWLcn

Dumont would further extend the lead to 6-3 on an empty-net tally.

Though, the Monsters would end the game on a bit of a high note, thanks to Justin Scott, who carried the puck in from the blue line and finally solved Alnefelt.

The final score was 6-4 in favor of Syracuse.

To blow a 2-0 lead at home on opening night would be deflating, but for the 9,035 in attendance on Friday, they never lost their voice or passion.

For that, they should have gotten one of the three stars of the night.

Stat of the Game

If you add up the jersey number for all of the players that scored goals for the Monsters and add a number 1 for the game number, you get 80.

Kivlenieks wore number 80 during his time with the Monsters.

Quote of the Game

“There were some moments that we had it, it slipped. We got some back, it slipped. So it was just back and forth. It just felt like we didn’t do enough good things to get the job done. But again, (it’s) game one. You always know going into it there’s going to be that rush you have to get off. Summer hockey still lingers longer than you want, even though you go through training camp.” – Eaves when asked if he felt like there was a point the game slipped from the team

The Monsters and Crunch will have a night’s rest, and they are right back at it tomorrow at 7 p.m. at the Rocket Mortgage FieldHouse.