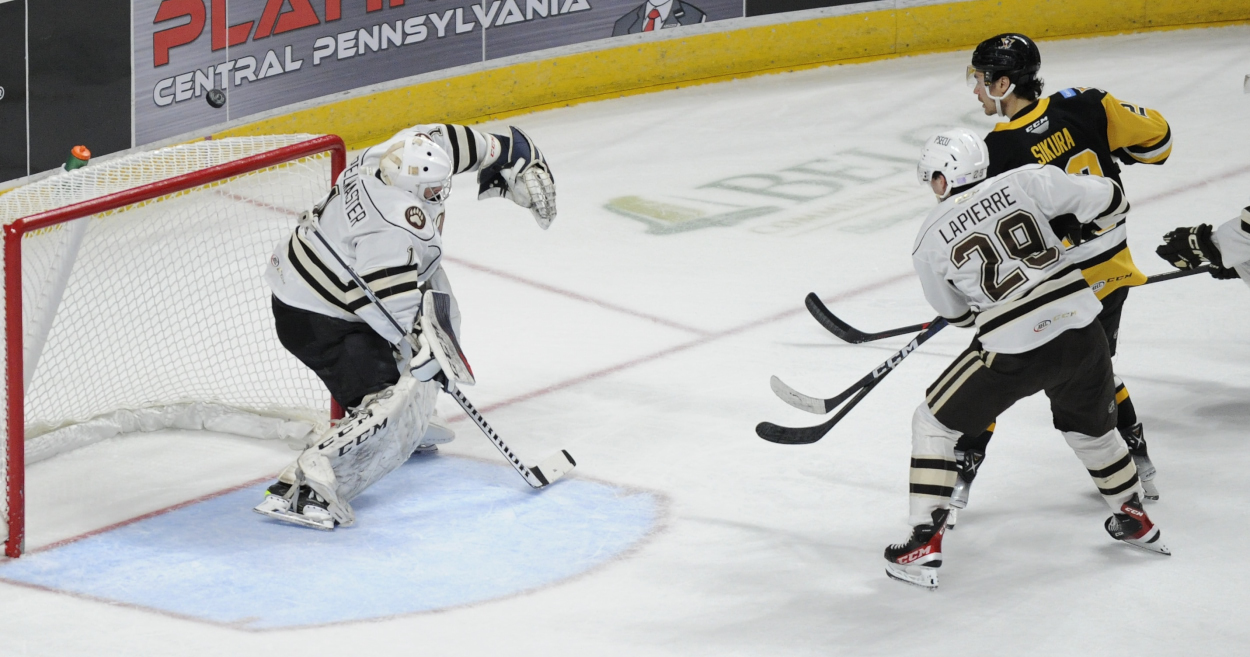 HERSHEY, Pa. – It was already a higher-scoring game than anticipated between the Hershey Bears and Wilkes-Barre/Scranton Penguins when the puck hit the ice for the second period, but the Penguins put an exclamation mark on the game by scoring five goals in eight minutes to turn a 3-2 deficit into a 7-3 win over the Bears at Giant Center. It was a tumultuous game for the Bears, who lost the league’s Goaltender of the Month, Hunter Shepard, hours before puck drop on recall to the Washington Capitals. After Zach Fucale was pulled, it was up to Justin Kapelmaster, who signed a professional tryout contract earlier in the day, for the back half of the game. On the other side, Filip Lindberg earned the win with 21 saves.

The start of the game seemed pedestrian compared to the rest of the game, with the teams exchanging goals in the first period. Sam Anas opened up the scoring 1:19 into the game on a great give-and-go play with Connor McMichael, with the latter setting up Anas for a quick backhand shot that got through Lindberg. Wilkes-Barre countered with Filip Hallander tallying on a rebound, as five of his seven goals this season have come against the Bears. Hershey again reclaimed the lead with Hendrix Lapierre’s sixth goal of the season, whipping a shot through Lindberg on a two-man advantage. The two teams went back and forth with a power play goal for Alex Nylander, his seventh of the season, and the Bears tallied late with Mike Sgarbossa’s fifth of the season on a quick keep-in by Mike Vecchione, his 100th professional assist. The score after one period was 3-2 in favor of the Bears.

The Penguins took control of the game early in the middle stanza, beginning with a power play goal for Valtteri Puustinen just 12 seconds into the man advantage. Wilkes-Barre took the lead for good on Mitch Reinke’s first goal of the season, as the puck bounced off the back boards and right to Reinke at the side of the net. Drew O’Connor got in on the act by tallying his sixth goal of the season on his way to a four-point night and first-star honors. Goals from Jonathan Gruden and Tyler Sikura put an exclamation point on the game and sent Fucale to the bench just before the midway point of the game.

The Penguins’ five-goal onslaught ultimately ended the day for Fucale, who was replaced by the newly-signed Kapelmaster.

Washington’s crease suffered a blow when Saturday’s starter, Darcy Kuemper, left their game against the Calgary Flames with an upper-body injury. With Sunday’s game a 3:00 PM EST puck drop, it did not leave enough time to bring a goaltender up from Hershey’s ECHL affiliate, the South Carolina Stingrays, so the Bears brought on Kapelmaster from their former ECHL affiliate and much more local team in the Reading Royals.

“The score tells you everything,” Bears head coach Todd Nelson said after the game. “I thought the first period we were pretty opportunistic up 3-2, and you could kind of sense that we wanted to get back to playing the right way. The second period, all of a sudden things fell apart, we gave up way too many odd-man rushes, way too many. That happens sometimes when panic sets in and guys try to do too much on their own, and it is gas on the fire. All in all, it’s disappointing, but you’re going to have these kinds of games every once in a while. We’ll have to get back to work tomorrow to straighten this out because we have another game coming up on Tuesday.”

“I’ll take responsibility for it. We thought as a staff that we did the right things to get the guys ready for today, and obviously, we didn’t. We’re trying to find the balance of work and rest, and I’ll take responsibility for it. Moving forward, we have a pretty tough stretch before today’s game, and we’ll have to manage it as best we can. We have healthy bodies now, so we’ll take it game-by-game. Five games in eight days is tough, so we’ll have to take it game-by-game.”

“First off, it was great that he came here to help us out,” Nelson said of Kapelmaster. “To be put in that situation…it’s a tough situation, and he came in and did a great job.”

It’s a very rare game for the Bears to allow seven goals and chase Fucale, who has been right up there with Shepard among the league’s best goaltenders this season. The loss snaps a five-game win streak for the Bears in their first game of December, while the Penguins had lost two in a row, including a 5-1 setback in their last game to the Bridgeport Islanders.

Wilkes-Barre hosts the Cleveland Monsters on Friday before enjoying a rare weekend off, only playing that game before they rematch the Bears in a pair of games at Mohegan Sun Arena.

Hershey’s schedule intensifies after a couple of days off, as they host Charlotte on Tuesday before embarking on three games in as many nights for the weekend, beginning in Bridgeport.