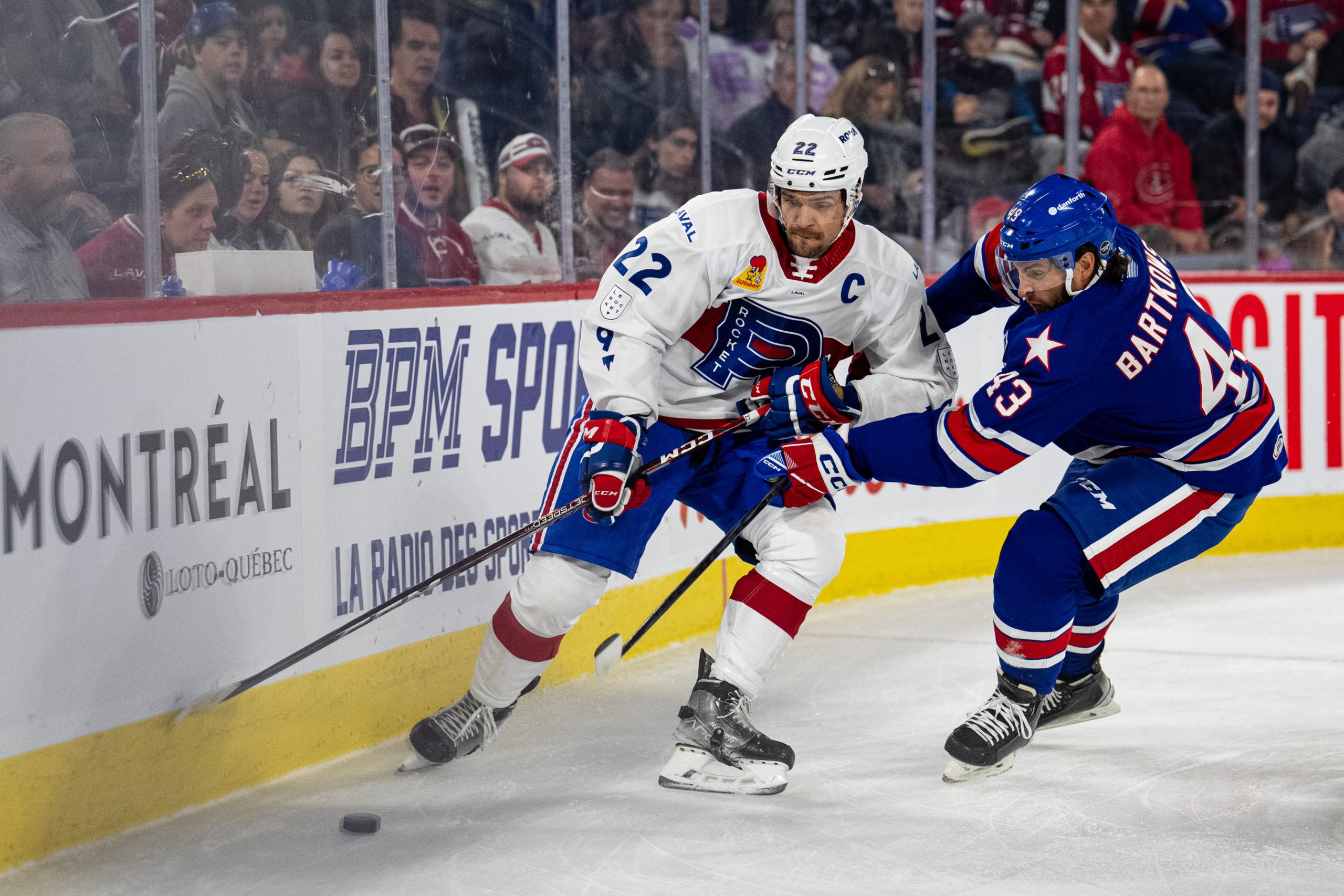 LAVAL, QC – Two teams, two games, 15 goals. The Laval Rocket and Rochester Americans split a back-to-back weekend set Friday and Saturday and combined for the aforementioned 15 goals over those two days. The Rocket took the win on Friday night with a score of 8-1, and the Americans flipped the script and left Canada with a 5-1 win on Saturday afternoon.

The two games were very similar despite the large score margins.

They maintained a solid, even pace for the majority of those two games. There were extended spurts of time where one team dominated gameplay. During those spurts where one team dominated the play and capitalized on their chances, the momentum always regressed to the mean. The goalies on either end greatly contributed to their team’s successes, and the word of the weekend was “response.”

The teams met up for the first time this season on Friday evening, and it seemed like the tension from last season and the playoffs were forgotten, and the slate was wiped clean. The Rocket opened the scoring on both days, and that paid off for them on Friday. They took that, built on it, and capitalized on as many chances as possible, including two power-play goals! The calm, collected attitude of the teams was quickly forgotten after some big hits – they remembered that there was some bad blood between them and the characteristic pushing and shoving of rivals in the North Division resumed as the Rocket and Americans tried to assert and defend themselves.

Friday’s game wasn’t moving at break-neck speeds; it was more of a mid-range pace for the better part of the first half. The momentum swung from both sides of the ice in level, even motions. As the Rocket scored more, they picked up steam and speed. The Americans matched that pace with them and followed the dance steps as the game got chippier after whistles.

In a comedic turn of events, Xavier Simoneau – listed at 5’6″ by the league – punched his dance card with 6’5″ Brett Murray. Neither landed any punches before officials broke it up, but they served five-minute fighting majors.

Xavier Simoneau is giving up close to a foot to Bretty Murray, he still chose to fight him. pic.twitter.com/PHFlv11u8i

After that, it was the Rocket show – Americans goaltender Ukko-Pekka Luukkonen and the forwards in front of him did their very best to stay in the game, but the Rocket picked their pocket and made the most of every look they got. Michael Houser replaced Luukkonen in the third period, and the Rocket still managed to sneak two past him, including a shorthanded goal on a double minor to Lucas Condotta. On the other end, Cayden Primeau and the posts kept the Americans at bay. Despite the final score, Rochester didn’t play a bad game – they fell victim to the wrong side of the puck luck for the night.

Seven different players scored for the Rocket Friday night, six of them on their first goal of the season. On a technicality, I am also awarding Simoneau a Gordie Howe hat trick along with his first star honors.

Saturday afternoon seems like it should be the exact opposite of Friday’s game. The Americans did all the scoring this time and walked away with the win. Aside from the score and starting goalies, these games were extremely similar. It’s not an idiom, but it should be: yesterday’s backups are today’s starters. Houser manned the crease at puck drop for the first time this season while the Rocket started Kevin Poulin. That should come as a shock to nobody.

The Rocket opened the scoring once again, but that didn’t work out nearly as well for them as it did the night before. The Americans not only responded with a goal of their own but two extra goals just to make sure the nail was well and truly hammered into the coffin. Oh, those three goals came in just shy of three minutes. Poulin stayed in the crease after the first intermission and tightened it up, but the Americans sent two more to the back of the net to seal the Rocket’s fate.

Other than that, the teams still played at the same pace as the night before, matching step and keeping the game moving between the zones. They traded some tussles, and the Rocket kept the – formerly – fourth best power play at bay all game once again. This time, where the Rocket controlled the game and exerted their will on the scoreboard, it was the Americans. That’s not the only fortune that saw a reversal on Saturday.

You guessed it – and even if you didn’t, you get a freebie this time: puck luck. That pesky, intangible, unpredictable, seemingly divine factor that may or may not actually exist. On Friday, the Americans beat the goalie but not the post or sailed the puck through the crease and out the other side instead of across the goal line. Saturday, it was Laval’s turn. Don’t get me wrong; all four goalies in this set played outstanding hockey. They stood on their heads, made big saves when their team needed them, and were beaten by excellent shots that they had no way of stopping. There wasn’t a fluky goal of the bunch, but there was also a lot of seemingly lousy luck hovering around one team or the other near the crease.

The Americans adapted to the Rocket’s play and outworked them for a win to split the weekend. Their defense tightened up on Saturday, and their forwards made smart moves on the forecheck to give them a comfortable lead and the confidence to bandage their wounded pride.

Houser earned the first star of this one, and you’d be hard-pressed to find someone that disagrees with that assessment. He was the foundation upon which his team’s victory was built. Usually, I don’t think that the backup goalie gets enough love. Saturday afternoon, Houser earned it.

That only leaves one thing I want to talk about. It’s the thing that won both of these teams one of these games: response. We saw both sides of that coin over the weekend. Friday, the Rocket opened the scoring, sat back and let the Americans get on the board, and then locked it down and dominated the box score. Saturday that turned on its head as the Americans went down by one and refused to back down until they were satisfied with their response. In a league like the American Hockey League, where the focus is on development, how teams and players respond to situations and adversity is vital to their growth and success.

The Rocket responded with their offense and powered their way into just their second win of the season. The Americans responded by leaning into the basics and trusting their goalie to get back into the win column for the year. It’s early in the season, and there’s no telling what the future might hold. These two teams made it to the playoffs last year after some notable struggles in the regular season. They could both very well do it again. They get there by ensuring they respond to every situation in the best way to guarantee success.

It wasn’t just that these teams had talent up and down their lineups or goaltenders that they could trust that won them each a game. How they responded to those situations got the job done for them – or didn’t.

The Americans return home to face the Syracuse Crunch on Wednesday, November 2, at 7:05 p.m. EDT while the Rocket shift their focus to hosting the Toronto Marlies the same day at 7 p.m. EDT.