Fish Live to Fight Another Day

In its final home game of the 2019 Kelly Cup Finals, the Toledo Walleye looked to extend the series against the Newfoundland Growlers using whatever means necessary. Entering Saturday’s game five, the Growlers owned a 3-1 series lead and found themselves just a win away from hoisting the brand new Kelly Cup. 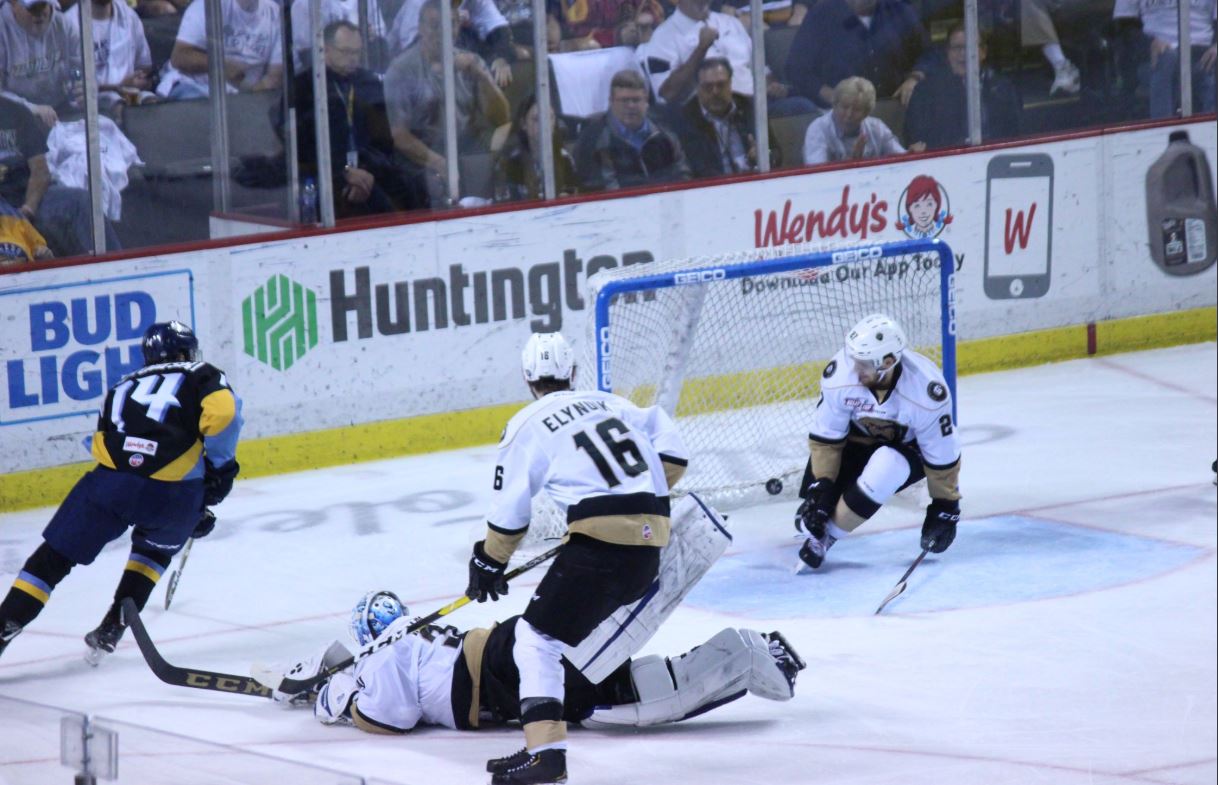 TOLEDO, Ohio – In its final home game of the 2019 Kelly Cup Finals, the Toledo Walleye looked to extend the series against the Newfoundland Growlers using whatever means necessary. Entering Saturday’s game five, the Growlers owned a 3-1 series lead and found themselves just a win away from hoisting the brand new Kelly Cup.
As an aside if you haven’t already heard, the Colorado Eagles still have possession of the Kelly Cup and allegedly have refused to give it back to ECHL brass, so a new cup has been commissioned for this year’s victors.
Getting back to the game, the Walleye came out from opening puck drop with one singular mission – send the series back to St. John’s.
Already buzzing, the Walleye pumped up the home crowd even further early on when Tyler Spezia took the kick pass from Ben Storm on net, and then buried his own rebound past Growlers netminder Michael Garteig for the 1-0 lead at just 2:27 of the first period.
The two teams would go on to exchange chances on the power play to no avail. Then, Marcus Power would knot the game at 13:12 of the first when he took the puck in around Pat Nagle off his backhand. A first period which had appeared to wholly belong to the home team was suddenly tied.
Three more penalties would be called before the end of the first 20, but no team would convert and the scoreboard read 1-1 entering intermission.
The Walleye, who had to kill off the remainder of a penalty to open the second, were forced to kill three consecutive penalties. The third time proved the charm – but not for the team on the advantage.
It was Toledo’s Ryan Obuchowski who gave the home team a 2-1 lead off a shorthanded rush. As the trailing man, he was able to put the give-and-go puck from Greg Wolfe and Spezia into the back of the net. This would mark the only special teams goal of the game, and was clearly the game’s turning point.

Obuchowski with the shorthanded goal and the Walleye take the lead. #NFLvsTOL pic.twitter.com/Nb4W2lNlF3

Just a minute and a half later, A.J. Jenks doubled the Walleye lead when he patiently faked out Garteig and took advantage of the now open cage.
With their eye on the prize, the Growlers were down but not out. Zach O’Brien responded about two minutes after the Jenks goal to make it 3-2 in favor of the home team when he beat Nagle on a point-blank shot in front of the netminder.
The horn sounded on the second period, and it was 3-2 Toledo where it mattered most, though Newfoundland had a 23-17 shots on goal advantage.
Just like they opened the first two periods, the fish controlled the early portion of the third. Yet again, the teams would trade scoreless chances on the power play halfway through the frame.
Each team battled for every inch of ice, but the clock continued to wind down without a change in score. Newfoundland head coach John Snowden was unable to pull Garteig until there were 55 seconds left on the clock thanks to stellar pressure from the home team.
As he was skating to the bench for the extra man, Garteig stopped and skated out to save what would have been an empty net goal, resulting in a Growlers’ too many men penalty. Newfoundland would end the game shorthanded, and with the buzzer sounding, Toledo had forced a game six with the 3-2 win.
Now, the series shifts back to St. John’s, Newfoundland, for game six and a potential game seven. The Growlers still own a series lead, though now it’s just 3-2, and game six marks the first chance they will have to win the Kelly Cup on home ice.
Jenks hopes his team will play spoiler to this, saying postgame,

Unlike game four, Walleye head coach Dan Watson was much more pleased with his team’s effort in the 3-2 victory.

“[We had] Two opportune goals… No passengers. You can’t have passengers this game and obviously we didn’t. We had guys blocking shots, just everything, all those hockey clichés you can throw out there. Just, [the] guys want to play another game. Bottom line. They want another day to play together.”

Where most coaches would likely dread trying to continue coming from behind on the road, Watson is embracing it.

On the opposing bench, Snowden was not surprised by the play of Toledo entering game five, but he notes there was one place his team could have improved.

“It was a do or die game for them, and it was an opportunity for us as well,” said snowden. “They started fast and they kept with it. I thought we had some spurts where we answered back, but at the end of the day if you look at the game it was even 5-on-5. Power play, they didn’t score, we didn’t score, they got a shorthanded goal. That was the difference in this game.”

In fact, the Growlers were held scoreless on five power-play opportunities. Not only were the Walleye able to convert shorthanded, but they forced the Growlers to the outside on any chances on the man advantage.

“They’ve got a good penalty kill,” explained snowden. “I think both teams are fighting for a lot on the power play. At the end of the day, we have a plan. Just got to execute the plan. We’ve got to do it with some pace. Can’t stay on the perimeter, we’ve got to attack the inside if we can, but at the end of the day it just comes down to execution.”

We’ll see which team is able to execute better in what amounts to yet another elimination game for the Walleye. Game six is Tuesday, June 4th, in St. John’s. It’s slated for a 5:30 p.m. ET puck drop, and the Growlers have the first of two opportunities to win their first-ever Kelly Cup at home.
As a reminder, follow @SinBinWalleye on Twitter for all updates on this series, and @SinBinNews for minor league hockey as a whole.