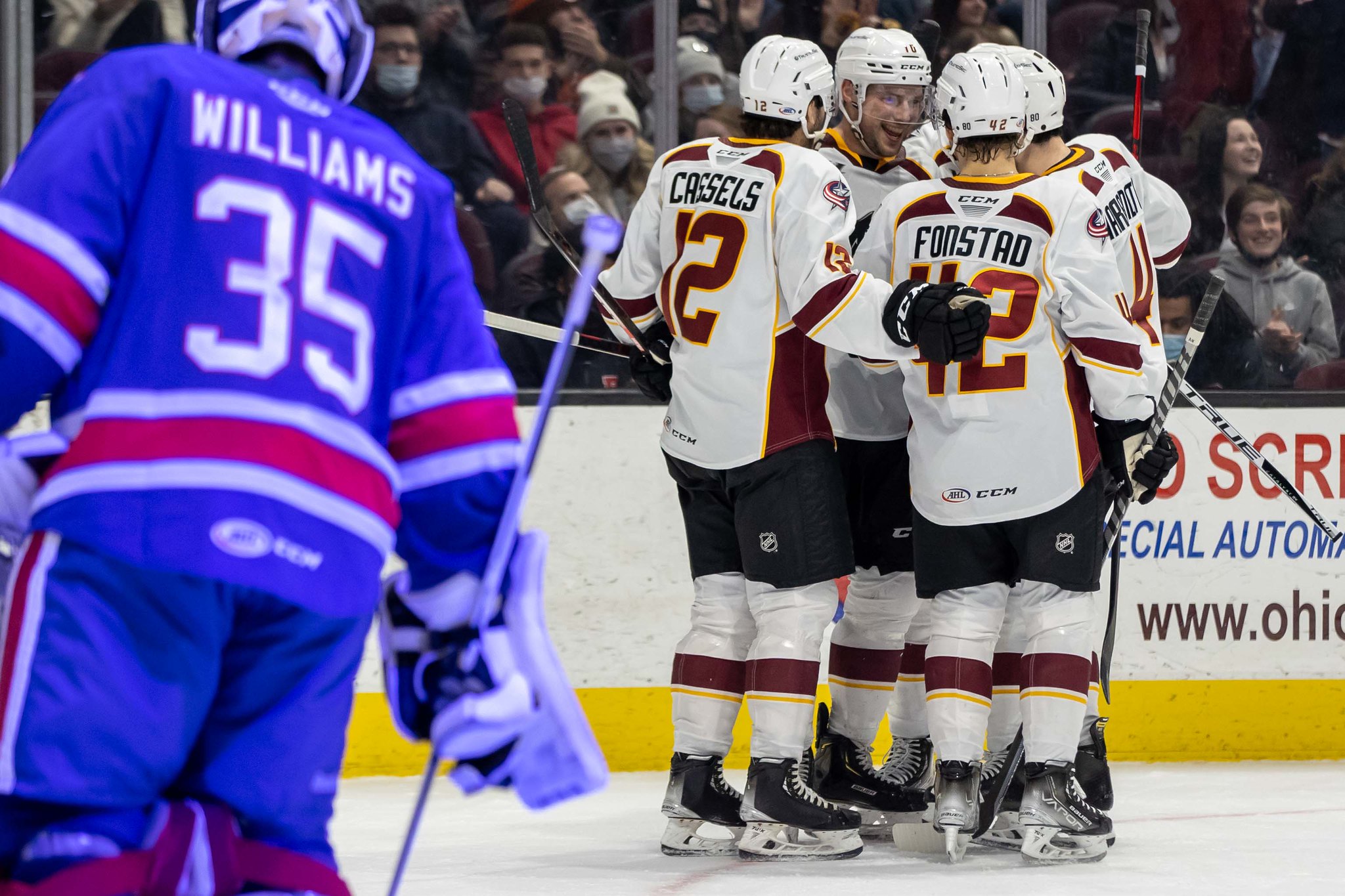 CLEVELAND – Going into Saturday’s matinee between the Rochester Americans and Cleveland Monsters, the odds were clearly stacked in Rochester’s favor. Over the last 10 years, Rochester has held a commanding 33-12-4-4 record against the Monsters. Over the previous 16 games, they’ve earned points in 11 of them. And less than 24 hours before this game, the Americans defeated the Monsters 4-1.

But, sometimes fate smiles upon the underdogs.

A final score of 7-3 in favor of the Monsters left everyone clad in the Wine and Black with big smiles. Oh, and two Monsters hat tricks didn’t hurt, either.

Following a physical game on Friday night, it would’ve been safe to assume that Saturday’s matchup would’ve been more of the same.

And it would’ve been too easy to let this one get out of hand early.

To start, you could definitely see the heavy legs and the effects of such a quick turnaround on a team. But, as the first period wore on, both teams started getting up to speed.

One thing was evident in the first two periods, though: Cleveland had a shoot-first mentality. Where they would’ve held the puck in previous games, they at least tried to get it on net in this one. At times, Rochester goaltender Charles Williams was left scrambling as he faced numerous back-to-back shots.

Along the way, that mentality went out the window and dissolved into “hit first, shoot later.” Granted, this ended up working out in the Monsters’ favor this time. Still, it added to a heavy workload for rookie goaltender Jet Greaves.

Though, the line of Adam Helewka, Cole Cassels, and Brett Gallant came to his aid shift after shift, helping clear the crease and pouncing on any errant rebounds.

Despite the 34-27 shot advantage, Rochester struggled against the numerous blocked shots and stellar goaltending by Greaves.

Brendan Gaunce and Trey Fix-Wolansky kept their eyes trained on the net all game long, which made all the difference. Gaunce’s seven shots and Fix-Wolansky’s four ended up as six goals on the scoresheet.

Brendan Gaunce ties this match up at 1 with a power-play goal.

Good things happen when you get your team-leading scorer open like that.

No, your eyes aren’t deceiving you. That’s two hat tricks for the Monsters in one game. First, Fix-Wolansky notched his third goal of the night with an empty-net tally at 19:18 of the third. Then, 14 seconds later, Gaunce drained the crowd of any remaining hats with his own hat trick.

The Monsters are absolutely buzzing right now. In his first game back after a three-game injury absence, Trey Fix-Wolansky gets the go-ahead goal.

“I’ve actually never seen that (two hat tricks in one game for the same team), personally. It’s a pretty great accomplishment. After last night, we wanted to come out and have a strong game, and that’s exactly what we did tonight.” – Fix-Wolansky

In postgame interviews, Fix-Wolansky made a point to say how appreciative he was that assistant coach Trent Vogelhuber gave him a shift with the empty Rochester net. His third goal was with the empty net.

“I was just thankful that Vogs (Vogelhuber) put me out there. It’s my first pro hat trick, so I was really excited about that. I was just really happy to get those three goals in my first game back.”- Fix-Wolansky

Coming into Saturday’s game, the Monsters were in the midst of a six-game home losing streak (0-5-1-0) and a skid of dropping eight of their last ten (2-6-2-0). They were, quite frankly, struggling and seemingly grasping at straws to right the ship.

Now, the streak and skid are snapped. It would be far too simple to point to Fix-Wolansky, Gaunce, and Greaves as the players that got them back to their winning ways. However, doing so would be a disservice to the other skaters on the Monsters squad.

Nice opportunity by Justin Scott here but Williams makes the save.

Overall, it was a solid team effort, especially in the first two periods. From the heavy hits and blocked shots by Billy Sweezy, steady defending and calming presence of Scott Harrington, a goal and heavy workload of Dillon Simpson, and the fascinating almost goals by Jake Gaudet and Cole Fonstad, the whole team earned this win.

Number of the Game: Two

Let me guess, you think the number of the game is two because of the two hat tricks. Well, you’d be partially correct.

But here’s an oddity for you. Both linesmen (Jim Scarpace and Joe Sherman) skated with the number 75.

I owe you a cookie if you caught that one live.

After the game, I caught up with assistant coach Vogelhuber. Here’s what he had to say about the difference between Friday night’s defeat and Saturday afternoon’s victory:

“We started on time, which is good. We won the first period instead of being down a goal after one. It’s a whole different feel after that point. So, obviously starting on time for those first 10 minutes and just staying with it. You can’t doubt or bail on the plan, because it doesn’t work.”

Next, I asked him about his thoughts on the Fix-Wolansky and Gaunce hat tricks:

They were shooters. Which, again, is something we’ve been stressing- for everyone to have a shooting mentality. Good for both of them, especially Fixy (Fix-Wolansky) coming off and not playing the last couple, to get rewarded.”

Up next for the Monsters is a two-game road trip. First, they face the Wilkes-Barre/Scranton Penguins on Monday at 7:05. Then, it’s off to Syracuse to battle the Crunch. Puck drop is 7:00 on Wednesday. Then, it’s back home to face the Pens next Saturday.