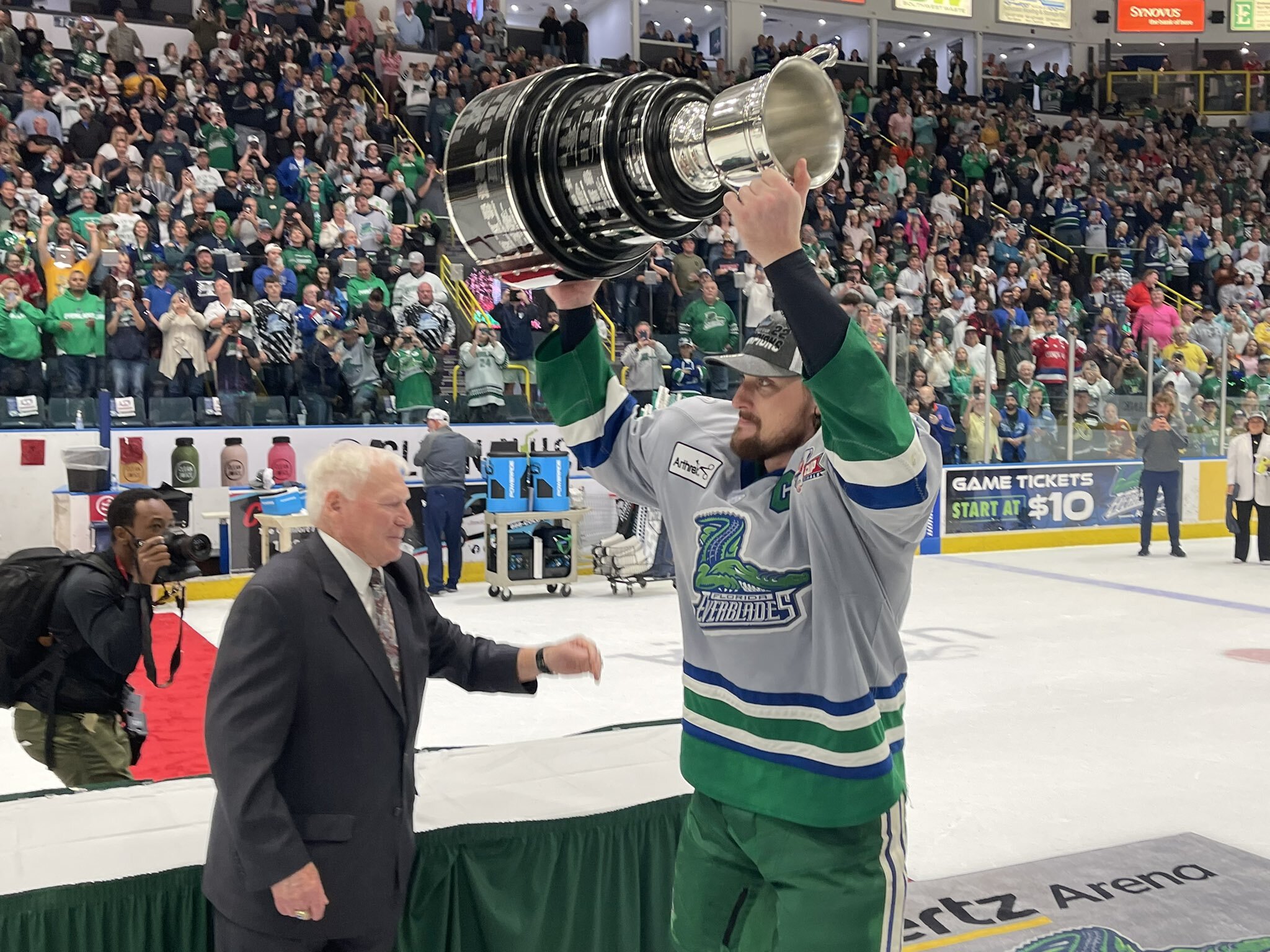 Ten years after claiming their first Kelly Cup title, the Florida Everblades are once again at the top of the ECHL mountain

ESTERO, Fla. – Ten years after claiming their first Kelly Cup title, the Florida Everblades are once again at the top of the ECHL mountain. The ‘Blades upended the Toledo Walleye in game five by a score of 4-2 and win the series 4 games to 1, to earn the franchise’s second Kelly Cup Championship.

Hours after seizing an overtime win in game four, the Everblades had all of the momentum heading into game five, but knew they would get the Toledo Walleye’s best shot if they were to lift the Cup. The Walleye would get first blood in this one, with Matt Berry scoring his fifth of the playoffs, potting a rebound from a Ryan Lowney shot to give Toledo a 1-0 lead.

From there, Florida would hit Toledo with a three-goal blitz that the Walleye would never recover from. The first goal came four minutes after the Berry goal, when Zach Solow lit the lamp on the power play to even the game at 1-1. Just under three minutes after the Solow goal, Matteo Gennaro gave the Everblades a 2-1 lead, when he fired a slapshot over the right shoulder of Billy Christopoulos for his ninth goal of the playoffs. Seven seconds later, the ‘Blades made the first piece of history on this evening, when Levko Koper found a puck after a collision at the top of the slot and beat Christopoulos to give Florida a 3-1 lead.

Just 7 seconds after Gennaro’s goal, Levko Koper finds the back of the net and the @FL_Everblades have a 3-1 lead in Game 5 of #KellyCupFinals22 pic.twitter.com/9F3dZ4foSH

Toledo would get one back late in the first, when John Albert scored his tenth goal of the playoffs, when he captured a pass from TJ Hensick and beat Cam Johnson to make it a 3-2 game.

The @ToledoWalleye get one back on the power play as John Albert finishes off the tic-tac-toe passing as Florida’s lead is 3-2 late in the first period. #KellyCupFinals22 pic.twitter.com/2hsVddk8aU

But Florida would respond back, scoring the sixth and final goal of an eventful first period. Solow netted his second of the period and ninth of the postseason with just over a minute left to give the Everblades a 4-2 lead.

From there, the Walleye would pepper Johnson with shots, but not too many grade-A chances. The Florida defense did a good job of forcing the action outside of the dots in the remaining 40 minutes of play, en route to their season-ending victory.

Cam Johnson would win the June M. Kelly Playoff MVP award, going 16-3 in the playoffs, with a 1.91 goals against average, a .931 save percentage with four shutouts. Everblades head coach Brad Ralph wins his first championship in his 108th playoff game coached in the ECHL, which is tied for the most all-time. Ralph also continues to pad his playoff win total, now at 63 wins, also most all-time in ECHL history.