Focus on Culture in Second String of Beast Signings

BRAMPTON, ON – With an extremely busy second week of signings, the Brampton Beast have fixated on impact players who will contribute to the right culture.

Focus on Culture in Second String of Beast Signings

BRAMPTON, ON – With an extremely busy second week of signings, the Brampton Beast are fixated on impact players who will contribute to the right culture and a forceful drive.

On July 13, the organization continued to add to their offseason roster by inking strong defenseman Cameron Heath for the 2020-21 season, who Head Coach Spiros Anastas describes as a “high energy” player. 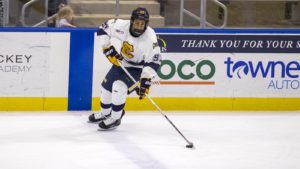 A native of Troy, Michigan, the 25-year-old Heath recently played with the Wheeling Nailers, Greenville Swamp Rabbits, and South Carolina Stingrays of the ECHL. He also previously played at Canisius College in the NCAA.

In college, Cameron picked up plenty of hardware, being named to the First All-Star Team in 2017-18. The previous season, he was awarded Best Defenseman, Second All-Conference Team, and Regular Season Champion in the NCAA (ANA). Heath wore the “A” for the team in his last season while leading team defenseman in assists (19), adding four goals to earn 24 points.

Anastas describes Heath as a player with incredible athleticism, having also coached him briefly with the South Carolina Stingrays.

“(He) plays with a great stick and closes on opponents very quickly. He is very good professional…who shows up to work every single day.”

Though Cameron might still be a tad raw, he has tons of upside in his game. A full season under Spiros and his staff should make him an impactful ECHL player.

The following day, the team announced the signing of a highly sought-after offensive dynamo. The Beast added skillful center Slater Doggett (from nearby Oakville) to a contract for the 2020-21 season. 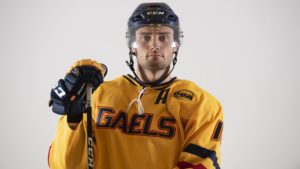 The Queens University Alum compiled an outstanding resume while playing there. The list of his accolades does not stop short, as he’s been named First All-Star Team in back-to-back seasons, Most Valuable Player, Outstanding Student-Athlete, and a Top 8 Academic All-Canadian for the 2018-19 season.

The 26-year-old Doggett has also previously played with the Kingston Frontenacs and the Windsor Spitfires of the OHL, Alaska Aces and Florida Everblades of the ECHL, and Sterzing Vipiteno of the AlpsHL where he amassed a whopping 42 goals & 44 assists for 86 points in 44 games last season.

Anastas was short and sweet when describing Doggett to The Sin Bin.

“He is a dynamic forward who can score and set up plays at a high pace.”

I myself can’t wait to see how Heath’s game translates to the ECHL over a full season. He’ll be exciting to watch.
On day three this past week, Brampton re-signed an all-around warrior. The team brings back for the 2020-21 season leading plus/minus defenseman Brenden Miller. 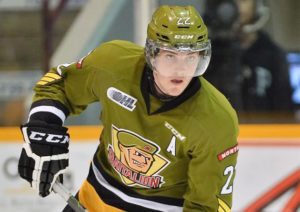 From just north of Brampton in Orangeville, Ontario, the 26-year-old Miller has played all around the world and is an everything man for this organization and city.

Last year for the Beast, Miller played in 59 games, picking up five goals & 26 assists for 31 points.

Brendan has had outstanding numbers while playing for the Battalion of the OHL over 5 seasons (in both Brampton and North Bay) where he was an assistant captain in his last season. While playing in Europe, Miller played for Ust-Kamenogorsk of the VHL, HC Banska in Slovakia, and AIF in Allsvenskan. He also skated in the ECHL with the Orlando Solar Bears, Florida Everblades, and Manchester Monarchs.

“He plays on the edge and with his heart on his sleeve, but everyone on our room knows he sacrifices every single game,” Says Anastas. “(He Has) innate ability to provide game-changing moments, whether it be a big hit, blocked shot, nice goal, or simply firing up our bench.”

Expect Miller to be the backbone of this year’s team, playing in big minutes while providing everything the team asks for to contribute to winning games.

On Thursday, July 16, the organization signed a versatile forward who Coach Anastas calls a “flexible player with value”. Justin Valentino has signed his first professional contract on this side of the globe with the Beast for the 2020-21 season. 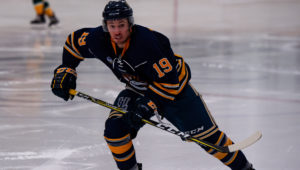 The Thompson, Manitoba native played for Coach Anastas while with the University of Lethbridge during his five seasons, not missing a single game.

Justin spent his first pro season this past year in Europe, skating with Briancon in France and Podhale in Poland. He picked up eight goals & nine assists for 17 points while with Podhale Nowy Targ during their regular season.

“(He) can also be moved up the depth chart and fit right in with the top producers,” Says Anastas. “His ability to make plays in tight is great, and he has breakaway speed that can lead to a lot of chances.”

Bringing Justin’s game back onto North American ice should suit his game with speed in tight areas. I’m predicting he’ll have a breakout season when he gets the opportunity.

The final day of the week had Brampton sign a player with some championship experience,  inking proficient winger Aaron Berisha. 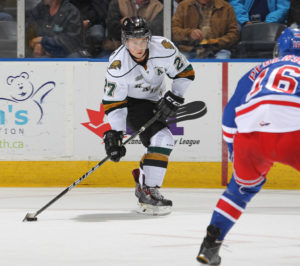 The 25-year-old hailing from nearby Toronto, Berisha brings in pedigree from his playing tenure with the London Knights & Belleville Bulls of the OHL, and with Saint Mary’s University. In his last year with the Knights, he scored 45 goals & 27 assists for 72 total points while being an assistant captain, helping to lead the team to a Memorial Cup Championship.

Berisha was a distinguished leader growing up during his time in the GTHL with the Toronto Marlboros. Aaron also earned the Most Valuable Player award for the OHL Cup in 2011.

Coach Anastas sees Berisha as yet another player ready to fit right into his system.

“He has high-end scoring ability and compliments our fast-paced style of play. He plays heavy on pucks, wins puck battles, and finds open areas in the Offensive zone to constantly be a threat to produce. “

Berisha’s game is well-rounded, his stature and character as a first-class individual will help take the Beast to another level this coming season.

The second period of signings signals that the Beast are concentrated on taking the next step forward bringing in players who will complement what they currently have while focusing on character, skilled value, and improving their culture.