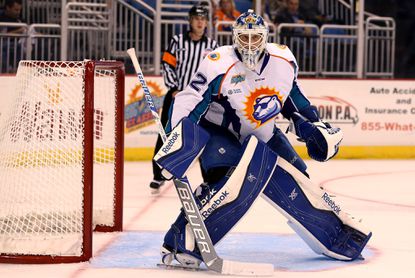 ORLANDO, Fla. – The Orlando Solar Bears made a splash signing today, announcing former goaltender Garret Sparks will return to the Amway Center for the first time in four years.

Sparks, a 27-year-old from just west of Chicago, spent a majority of last season nearby with the Chicago Wolves of the American Hockey League. He was 8-14-5 in 26 games with a goals-against average of 2.75 and a .908 save percentage. He also appeared in an NHL game with the Wolves’ affiliate, the Vegas Golden Knights.

Before the 2019-20 season, the 6-foot-2, 201-pounder spent the past seven seasons in the Toronto Maple Leafs organization and played parts of three of them with the Solar Bears. In 47 career ECHL games, the OHL-graduate has a 26-13-3 record with 2.42 goals-against average and a .933 save percentage. His .936 save percentage during the 2014-15 season in 36 games led the league and earned him a trip to the All-Star Game, while establishing franchise single-season marks for shutouts (5), goals-against average (2.34), and wins (21; since broken).

The 190th overall draft pick in 2011 has his most impressive season in 2017-18. As the main puck stopper for the Toronto Marlies, Sparks had a record of 31-9-3, a save percentage of .936, and a goals-against average of 1.79, all of which led the league in their respective categories. He was a key factor in helping the squad win the Calder Cup, winning 14 out of 19 games in the playoffs, and was rewarded with Baz Bastien Memorial Award for Best Goaltender for his efforts.

The Solar Bears will definitely see improvement in their roster picking up such a strong goaltender. They will open a two-game preseason set this weekend in Estero, Florida against the Everblades.