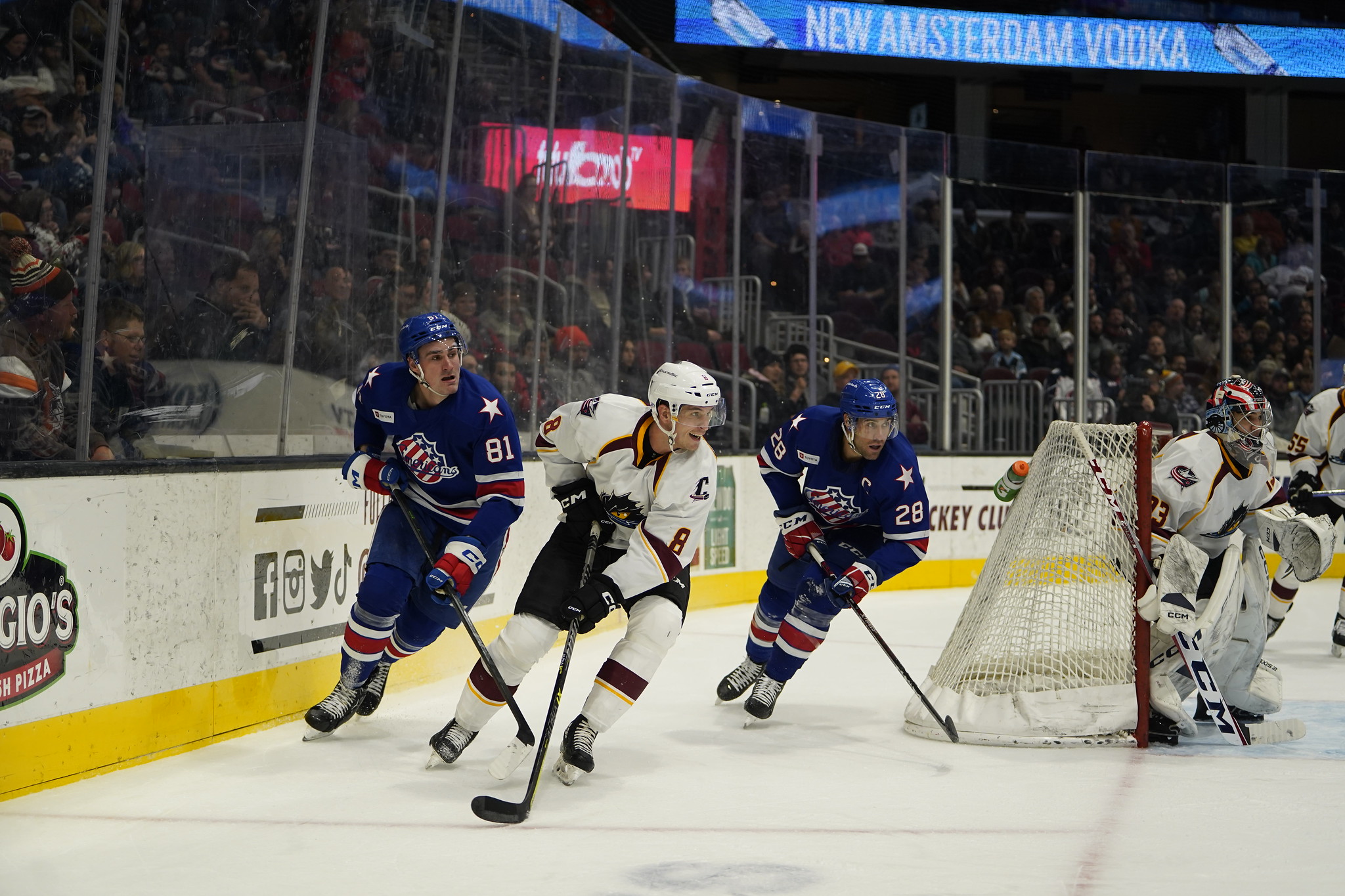 Hockey’s Future Stars on Display in Cleveland Against Rochester

Cleveland's Brandon Davidson and Rochester's Brett Murray and Michael Mersch look for the puck in a match in Cleveland on December 3, 2022. Photo credit: Kevin Cek/Cleveland Monsters

Hockey’s Future Stars on Display in Cleveland Against Rochester

CLEVELAND – Screams of happy and excited children filled the Rocket Mortgage FieldHouse on Saturday night. Though, instead of being clad in the traditional wine and gold of the Cleveland Monsters, pockets of unique, often NHL-inspired, jerseys made up the 11,298 in attendance. After lots of spotlights for the many youth hockey teams in attendance, the fans were treated to a high-paced American Hockey League game where the hometown Monsters sneaked by the Rochester Americans 4-3 in regulation.

It was Grow the Game night in Cleveland, which was a chance to celebrate youth hockey across Ohio and the groups working to make hockey accessible to all.

For the Monsters as an organization, they set the precedent for community engagement and giving tomorrow’s superstars a chance to discover the game. Cleveland Monsters Vice President of Marketing & Communications, Ben Adams, shared more behind the night’s message:

“We have great youth hockey here in Cleveland. So, tonight was about getting to show off some of the partnerships that we have with the local schools and programs around the area. A lot of them were here tonight. We are also starting a new program, which we shared a little bit on today, with the High School Hometown Showdown Series, presented by the US Marines. So next week, on Friday, even though we’re on the road, we’re going to be out at OBM arena, with Padua and University Schools, highlighting their matchup. So, whether it’s anything we do with our clinics and Learn to Play events, all the way up to high school hockey, today is about celebrating all of that.”

From youth hockey clinics to traveling open practices with player meet and greets, along with the Try Hockey for Free and Learn to Play programs, among others, the Monsters are truly invested in the cause. The success of those programs was evident in the stands, with seemingly hundreds of children repping their youth team.

“Well, hopefully it means that we’ve had some sort of impact in terms of involvement. I think what it really means is that there’s just a really strong base of hockey fans and players here in Cleveland, whether the monsters can take credit for that success or not. We’re lucky to be a part of a market that’s got a long-standing tradition, even before the Monsters, at great youth hockey.”- Adams

Youth hockey in Ohio has come a long way in recent decades. Before, you rarely heard of Ohioans making the jump into professional or other higher forms of hockey. Now, there’s an ever-growing list at all levels of the game.

In the Columbus Blue Jackets and Cleveland Monsters organization alone, you have players like Carson Meyer (Powell), Sean Kuraly (Dublin), Jack Roslovic (Columbus), and Cole Sillinger (Columbus). The AHL also features Michael Houser (Youngstown), who faced Cleveland in net on Saturday night. Women from Ohio have also made their mark on higher levels of hockey, including Blake Bolden (Stow), Kristin King (Piqua), Brianne McLaughlin (Elyria), and Kelli Stack (Brooklyn Heights). Plus, there are others hailing from Ohio in the coaching ranks, like Ben Simon (Shaker Heights), and many more playing across the AHL and NHL.

A Coach That Knows

Cleveland Monsters head coach Trent Vogelhuber hails from Dublin, a suburb of Columbus. A former seventh-round draft pick by Columbus in 2007, he’s moved from a Calder Cup-winning playing career (with the Lake Erie Monsters in 2016) to his first head coaching position with the Monsters.

Coming from Ohio, he’s seen the game at local levels grow before his eyes throughout his career. Getting his start with the AAA Blue Jackets before moving on to the NAHL and USHL before his collegiate days at Miami University, Vogelhuber has had his skates dipped in hockey at almost every level in Ohio.

In an exclusive interview with Field Pass Hockey, Vogelhuber remarked on the growth of not just the number of hockey programs but the caliber of the players coming through Ohio since his youth hockey days.

“I spent most of my time in Columbus. Just the Blue Jackets being around was so instrumental in Columbus hockey, specifically, but Ohio in general. One thing that we’re seeing is ex-hockey players who have played for the Blue Jackets sticking around and staying involved in youth sports. When you have good teachers like that around that have played at the highest level, you really see the results with with the kids and the way that they’re coming up. You’re starting to see that now. I mean, Cleveland has been a hockey hotbed long before Columbus was and still probably has much more depth in that department. But Columbus is right there with the top of the top as far as the best talent, I think.” – Vogelhuber

Vogelhuber also shared his love for the sport and how the presence of pro-level teams can inspire the hockey stars of tomorrow:

“There’s nothing better than when you’re a kid who loves hockey, like I did, and get into come to a professional hockey game. The music and the game on the ice can inspire you to want to do that for your future. That’s what it did for me, being able to see some, back then, Columbus Chill hockey games. It made me want to play so it’s, it’s great to be able to have those kids around and hopefully inspire some of them to want to do the same.”

Before racing off to tend to his post-game coaching duties, Vogelhuber did have a message for any parent considering enrolling their child in a youth hockey program in Ohio:

“Do it, because it’s a lot of fun. It’s a big commitment level, which is why it’s so special, because the players and families that are involved love the sport. It’s fun to be around people like that and just to make sure everybody’s having fun. Sports can be crazy these days. So, we want to we want our young hockey players to enjoy the game first and foremost.”

Thanks to pro organizations like the Cleveland Monsters, the ECHL’s Cincinnati Cyclones, the Blue Jackets, and countless youth hockey programs across Ohio, the chances to learn and enjoy the game are more plentiful (and successful) than ever.

If you are in Northeast Ohio and want to explore youth hockey programs near you, check out the Monsters’ Grow the Game page.

Moving to the action on the ice, this looked every bit like a battle between the number two and three teams in a tight division race.

Coming off an overtime loss on Thursday, Cleveland was poised and ready for a fast and hard battle to take the back half of this two-game series. Leading the way, rookie defenseman Samuel Knazko. Though he did not appear on the scoresheet, he played a pivotal role in this game, giving his goaltender, Jet Greaves, plenty of room to work. He was masterful in clearing pucks and people out of the crease with ease.

Amazing shot by Robbie Payne through the legs of Peter Tischke and past Michael Houser for the insurance tally. Huge depth-scoring tally. Honorary assist to Josh Dunne with a solid goaltender screen.

On the other side of the Rochester special teams, Brandon Biro and Jiri Kulich really shined. Any time these two were on the ice, Cleveland had to be on their toes. They found ways to make their own chances out of nothing, peppering Greaves in the process. Biro finished the night with two goals, both at even strength.

Houser was stellar throughout the night, despite the 22-save loss. At times, he kept his team in this game. When faced with high-octane players like Emil Bemstrom and rookie Kirill Marchenko, Houser kept his composure, making some highlight-worthy saves in the process.

For the Monsters, all players that entered the game on a points streak extended their streaks, while others started streaks of their own:

My “Momentum Kings of the Night” award goes to Monsters forwards Tyler Angle and Luoto. On both Rochester power plays, they matched his man stride for stride. Facing a very strong transition and rush team, they forced several shorthanded chances and knocked any poise and strength out of the Amerks. When the Monsters struggled, those two powered through.

The “He Never Gives Up” award goes to Biro. He scored the second and third Rochester goals, the second one while down by two. Teaming up with Lukas Rousek, Biro joined a rush play and expertly found open ice in a high-stakes third period.

Rochester came together on a huge rush play to get them back to a one-goal game. Terrific release by Brandon Biro for his second of the night.

The “I Totally Meant to Do That” award goes to Gaunce for this tie-breaking goal.

After some extended zome time, the Monsters finally hit twine once again.

Kiril Marchenko with the huge windup. The puck took a pinball's journey, bouncing off at least 1 Rochester stick and Brendan Gaunce's shinpad before going in the net.

Finally, I’m awarding the “Eagle Eyes” award to Brett Murray, Michael Mersch, and Sean Malone. Early in the first period, they spotted a vulnerable Greaves behind his net. The three formed a triangle behind Greaves, giving them open ice to intercept Greaves’ pass and score in an empty net.

Monsters goalie Jet Greaves with some miscommunication when playing the puck behind his own net. When he looked back for options, all he saw was blue and red. Michael Mersch and Sean Malone capitalize on the open net, notching their first of the night.

With the signing of veteran Brandon Davidson on Tuesday, he becomes the 400th Monsters play in club history.

Cleveland has the bulk of the week off before heading out on a three-in-three set against the Wilkes-Barre/Scranton Penguins and Hershey Bears on the road. The series starts in Wilkes-Barre/Scranton on Friday at 7:05 p.m. Then, they are off to Hershey for a back-to-back on Saturday and Sunday evenings.