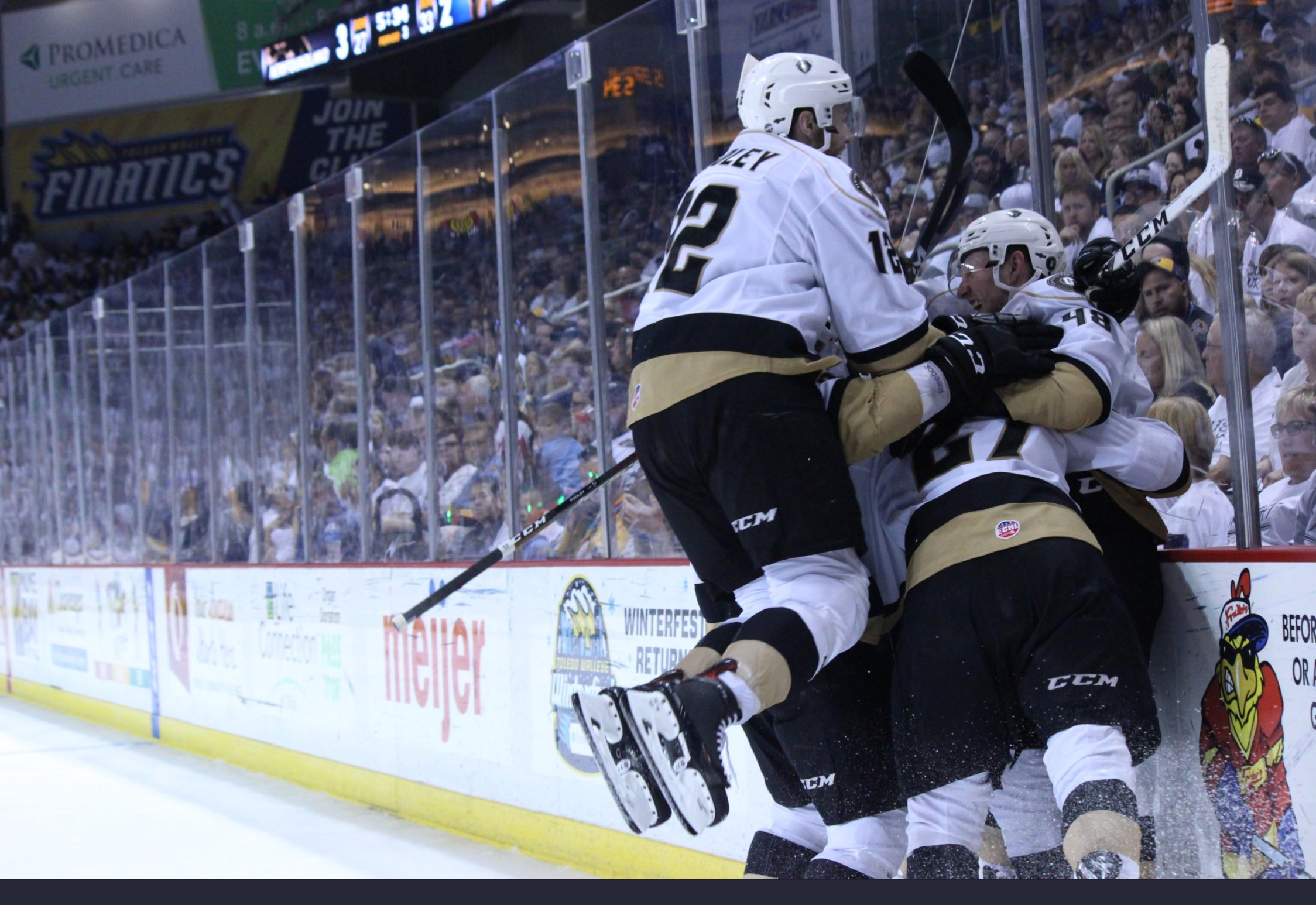 Friday in Toledo brought about both beautiful weather and a pivotal game four of the Kelly Cup Finals. Win, and the Toledo Walleye would push the series to at least six games. Lose, and they would face elimination at the hands of the Newfoundland Growlers at home Saturday.

TOLEDO, Ohio – Friday in Toledo brought about both beautiful weather and a pivotal game four of the Kelly Cup Finals. Win, and the Toledo Walleye would push the series to at least six games. Lose, and they would face elimination at the hands of the Newfoundland Growlers at home Saturday.
With pregame skate beginning with both teams patrolling the red line, one could only predict how the game would open.

What’s the last time you saw this much pregame action at the red line? #NFLvsTOL pic.twitter.com/6WtIng5Agr

If you guessed the teams would combine for 22 penalty minutes in the first, you’d be correct.
Just after the Walleye got back to even strength after taking the game’s first penalty, Newfoundland’s Brady Ferguson put the visitors on the board after the Growlers were able to capitalize on the chaos in front of Pat Nagle and the Walleye net to make it 1-0 at 8:51 of the first period.
Two minutes after the Ferguson goal, tempers came to a head with James Melindy and Bryan Moore dropping the gloves in a heavyweight bout.

It’s Moore and Melindy with the first fight of the game and the crowd in Toledo goes WILD. #NFLvsTOL pic.twitter.com/Op98Z5Z7Hc

Hudson Elynuik gave the home team its first power play when he blatantly ran into Nagle, and Matt Bradley joined him in the box at the same time for high-sticking. The Walleye were able to knot the game on the man advantage, converting on the 5-on-3 when Greg Wolfe‘s shot beat Growlers netminder Michael Garteig clean through traffic at 13:56 of the first.
After getting into an early shot on goal deficit in the first, the Walleye were able to sustain pressure in the latter portion of the period to knot the game at one, and tie the SOGs at 15 all entering the first intermission.
Toledo opened the second with an abbreviated power play but was unable to convert and found itself killing the game’s next two penalties. The second came off a call which had the crowd booing the refs. Moore went to skate through the crease and would likely have missed Garteig clear, but the netminder appeared to move towards Moore to force contact and draw the penalty.

This should be embellishment on Garteig but instead Moore gets the lone penalty. #NFLvsTOL pic.twitter.com/loKV5AKs09

Ferguson was able to record his second goal of the game, this time on the power play, with an easy tap in on the pass from the doorstep, and the visitors suddenly had a 2-1 lead.
Fueled both by the call and the roaring, booing, crowd, the Walleye seemingly shifted into another gear to close out the sandwich stanza. They forced Garteig to make challenging saves out of position, and they were finally able to pot one past the netminder with 25 seconds remaining in period two. It was Bryan Moore who was able to find twine off the rebound from the blue line bomb by Matt Register and the two teams entered the third knotted at two.
Toledo was given another power-play chance in the third and threw everything it could at Garteig, but Derian Plouffe ate three bit bombs from the point alone into his body. He limped off the ice to cheers from his teammates, and this may have been the game’s turning point.
After each recording 20 SOG in the first half of the game, the Walleye held the Growlers to just 5 shots in the following 20 minutes of play while recording 13 of their own.
However, it would be Newfound’s 26th shot of the game which would prove decisive when Kristians Rubins netted his first of the playoffs on a knee-drop goal at 11:14 of the third. From there, it looked all Growlers though the Walleye crowd did its best to get the home team going.
Bradley put the final nail in the Walleye’s game four coffin when he banked the puck in off Nagle from below the goal line at 14:26.
With 2:28 left in regulation, Walleye head coach Dan Watson took his time out and pulled Nagle for the extra attacker, but the Growlers defense refused to allow even a chance after the Rubins goal, thoroughly shutting down the home team.
With the 4-2 win, the Newfoundland Growlers now have a 3-1 series advantage in the Kelly Cup Finals over the Toledo Walleye and can win their first-ever Kelly Cup Saturday with a victory in Toledo.
After the game, Watson was asked to break down the goals allowed by his team.

“Just easy goals. You can’t give a team like that easy goals. The second goal was a gift – not by us *scoffs*. The third goal we overpursued the puck and left a lot of open for them with the speed and skill they have, they’re gonna capitalize on those. The fourth goal, just a chip shot, bank shot, we’ve had a couple of those ourselves and all of a sudden it’s 4-2. It’s one of those things that this time of year you’ve got to make teams earn it, and we weren’t good enough in that department.”

It’s important to note that Watson appears to echo the sentiment of both the Toledo crowd and his players regarding the Moore penalty for interference on the goalkeeper. Garteig saw it differently postgame, saying,

Regardless of the outcome of this penalty, it’s clear the Walleye need to be firing on all cylinders Saturday if they hope to force a game six. While they looked electric at times, Watson’s squad had lazy changes which resulted in tired defensemen getting hemmed in their own zone for extended periods of time. Because of this, the Growlers were able to generate quality shots and challenge Nagle.

“We need a whole team effort here tomorrow for sure,” said watson. “No passengers and everyone’s got to be going.”

On the other bench, Ferguson and the Growlers need to focus on the game at hand instead of the big picture if they want to win their first championship in their first year of existence.

“It feels good, but I think it’s a short victory,” explained ferguson. “We’ve got to come out tomorrow and just win a game. Do whatever it takes. Just one more.”

Be sure to follow @SinBinWalleye and @Sarah_Hobday as they continue to provide on site coverage of the Kelly Cup Finals.