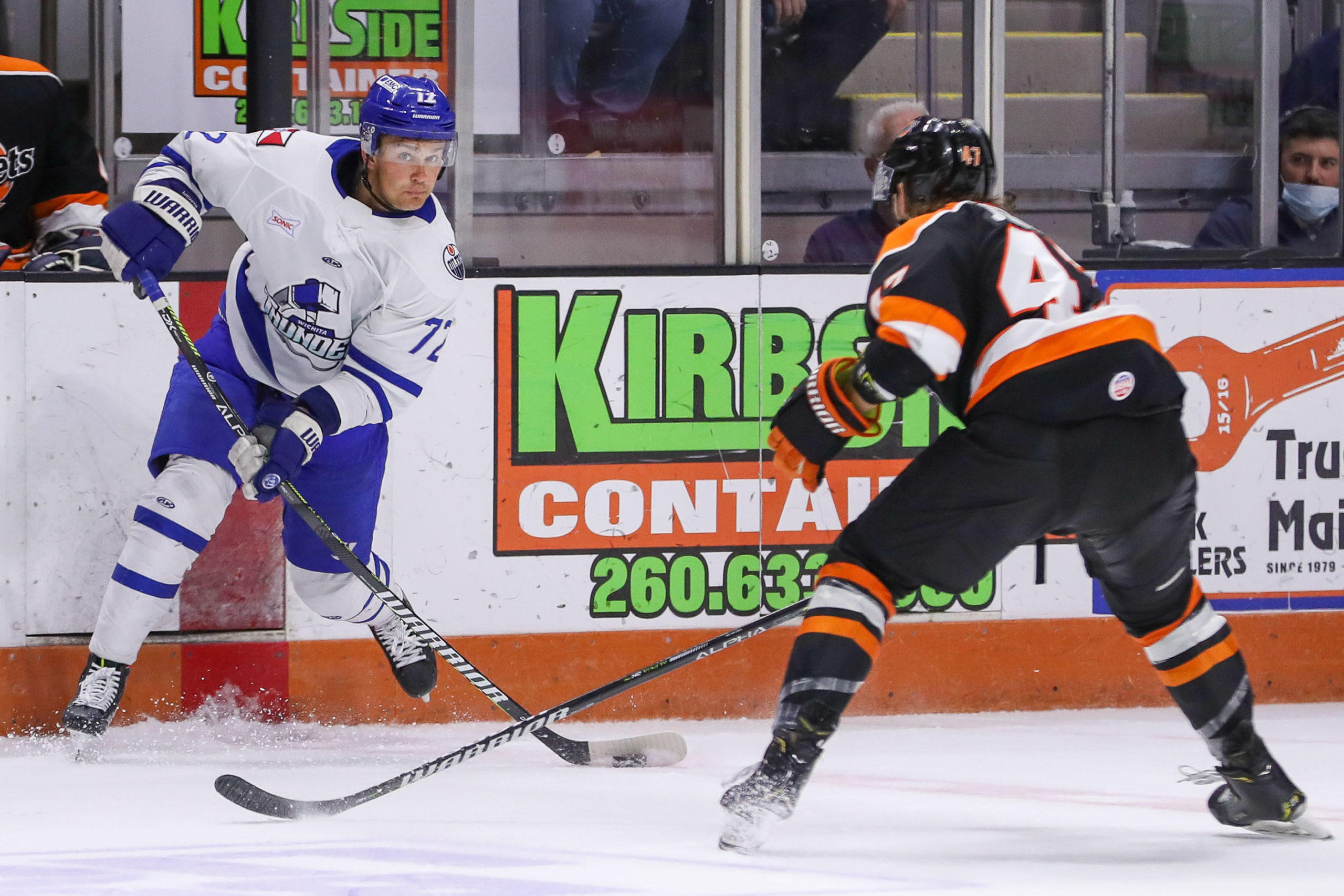 FORT WAYNE, In. – Bruce Ramsay was adamant before game four – they had to win this game before they could win game five. Falling behind 2-1 in the series Friday night was a reality check for Thunder players and fans alike, as the outstanding season was now potentially 60 minutes from ending. Despite the missing pieces of veteran big boys Stefan Fournier and Ryan White as well as penalty kill specialist Stephen Johnson, Wichita got help from a consistent goal scorer to even the series at 2-2.

Wichita got things started on Saturday night – a fact that had plagued them in the past few weeks (ended regular season with two straight losses when scoring first, then began playoffs with a loss after scoring first) – as Spencer Dorowicz snuck one in off a skate.

Fort Wayne answered just under two minutes later after Alex Peters was whistled for a roughing minor – a strange penalty given the number of skaters involved in the scrum. A.J. Jenks scored his first non-shorthanded goal of the series on the powerplay, tipping in  Randy Gazzola‘s shot directly after winning the powerplay’s opening faceoff.

It was clear the first period was mostly controlled by Wichita. Other than the tough seconds of the penalty kill, Wichita maintained pressure, keeping the 1-1 score through the end of the first and into the early stages of the second.

The Komets began to hit their stride in the mid-stages of the second, but Evan Buitenhuis was solid behind the Thunder, stopping all 13 shots against in the second. Both teams failed on their second-period powerplay chances as the second ended, still knotted at 1-1.

Wichita hit the ice in the third with their foot firmly on the gas. It was clear they had finally returned to their style of play. The period quickly began with a couple of hits and immediate offensive pressure for Wichita.

Matteo Gennaro found nylon just 56 seconds in, beating Dylan Ferguson with a quick wrist shot from the top of the slot.

The Thunder kept their style of play going, laying a couple of hits before Peter Crinella caused a turnover in the defensive zone. Brayden Watts picked up the loose puck and sent it forward to Cam Clarke. After carrying the puck into the zone, Clarke sauced one across the zone to Gennaro, who one-timed one past Ferguson for the second time in under four minutes.

The teams exchanged powerplays within seconds of each other just past the midway point of the third, but neither capitalized. Fort Wayne regained some life with 2:24 left as Justin Vaive bat home a loose puck midair to draw the Komets to within one.

The Thunder failed to convert on five powerplay chances and allowed a powerplay goal to Fort Wayne on one of their three chances. Wichita’s opening powerplay impressed, throwing three shots on net in the time. They would proceed to only get three shots on the next four powerplays combined.

Buitenhuis earned his second playoff win of the year, stopping 23 of Fort Wayne’s 25 shots. Ferguson was stunned long enough for Wichita to strike twice, handing him the loss as he allowed three goals on 21 Wichita shots.

Wichita and Fort Wayne will settle things one final time on Monday night, set for a 6:30 pm CT puck drop. Matthew Harding and I will prep you for faceoff on the Sin Bin pregame show, starting at 5:50 pm CT.