DES MOINES, Iowa – It may be just two games into his NHL career, but Gerald Mayhew is already proving that his skills and energy are the right prescriptions for the Minnesota Wild. After proving his worth with the team’s AHL affiliate, the Iowa Wild, over parts of the last four seasons, Mayhew could very well be the centerpiece of what is expected to be a major rebuild for the big club.

Gerald Mayhew’s love of hockey began when he was three-years-old. At Christmas, his mom bought him a bunch of equipment, hoping that Gerald would take a shine to one of the sports introduced to him. It didn’t take long for him to use his toddler brain to make some adjustments. “I had a little mini-golf set, and they said as soon as they got me that I started hitting slap shots. So, that’s when they knew I loved hockey.”
The next step was getting him out on the ice, and it didn’t take long before he was like a penguin on ice (sounded more appropriate than a duck in water). “They took me skating for the first time. I think I was like three years old and they said I just loved it. I loved it right off the bat. I just couldn’t stop smiling.” 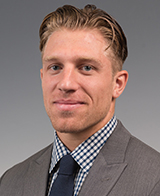 By his senior year, all Mayhew wanted to do was play hockey. He started receiving phone calls from scouts and realized that a professional career was a real possibility. “I kind of set my mind to it saying I could take this further. I just decided that I wanted to make a living out of it.”
After graduating, Gerald headed for Cedar Rapids of the USHL. He proved his scoring prowess early on, netting 20 goals in 58 games in 2011-12. The next season, his goal total went down, dropping to 16, but his play-making skills much improved. The forward went from 13 assists his first season to 28 in his second, finishing with 44 points in 59 games.
After two years in the USHL, Gerald decided he wanted to play hockey and earn a degree. He committed to Ferris State University, where he instantly became a force for the Bulldogs.
In his freshman season, Mayhew scored eight goals and added 11 assists in 36 games. He tied for the team lead with three game-winning goals and scored the only goal for the team in their 1-0 victory over Colgate in the NCAA tournament.
A year later, his stats improved as Gerald scored 11 goals and added 12 assists in 40 games. His 23 points tied for the team lead as he was named the WCHA Offensive Player of the Week on November 19, 2014.
The Wyandotte, Michigan native took his game to a whole new level in his final two seasons. After averaging a little better than a half a point a game through his first two seasons of college hockey, Gerald would average better than a point-per-game over the final two. He scored 16 goals and added 25 assists in 41 games during his junior year, leading the conference in points. Mayhew scored the tying and winning goals 37 seconds apart in the team’s first-round victory in the conference finals, helping propel the team to the WCHA Conference title. He would total five points in the NCAA tournament, as the Bulldogs would reach the NCAA Regional Finals.
A year later, Mayhew scored 17 goals and added 18 points in 33 games. It was the second straight season where he led the WCHA in points, and he scored the game-winning goal against Colgate in the Bulldogs NCAA Tournament victory. In the second round, he set up the game-winning goal in overtime that sent heavily favored St. Cloud State packing. Gerald finished with 176 points, making him the all-time leading scorer at Ferris State. 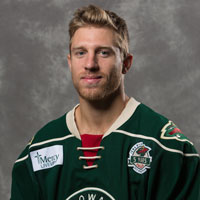 Inexplicably, despite putting up outstanding numbers in college and delivering several clutch goals, Gerald Mayhew was not drafted coming out of college. He signed with the Iowa Wild of the AHL directly after graduating, and was an essential addition down the stretch, scoring six goals and adding an assist in 17 games.
In 2017-18, Gerald returned to the Wild, scoring 16 goals while adding 16 assists in 72 games. His 32 points placed him ninth on the team in scoring, but things were about to change the following season. The Wild brought in Tim Army as the new head coach, and there was going to be some changes with the team.
Gerald was going to be a part of that rebuild. He signed a two-way contract with the Minnesota Wild and assigned by the parent club to Iowa. The big club had seen enough to know he deserved a chance to continue to develop, and that is what the forward did.  Last year, Gerald scored a team-leading 27 goals and finished second on the team in points with 60. He led the team in plus-minus at +15, but he saved his best performance for the playoffs.
The Iowa Wild reached the post-season for the first time since moving to the Hawkeye State, and Gerald proved he was ready for primetime. The forward scored nine goals in 11 games, finishing as the top goal scorer in the playoffs despite only making it to the second round.

Prepared to Rule the State of Hockey

Gerald Mayhew entered this season knowing the pressure was on. He is now 26 and in the final year of his contract. The Michigan native was brought to the Minnesota Wild training camp, but was one of the last cuts, sending him back to Iowa. Despite this, he knew he had made an impression.
“I think they liked me. Like (Head Coach) Bruce (Boudreau) said, I create energy and, you know, I’m always going to the net, and I’m always in the dirty area. So, I think that coaches love that. I’m pretty friendly around the locker room, so I think they like me, so we’ll just have to wait and see.”
The forward could have returned to Iowa upset that he didn’t have the opportunity to remain but, instead, returned to the Hawkeye State determined to work that much harder to get back to Minnesota.

“I really wanted to make the team in Minnesota out of camp, and that didn’t happen. So, it’s not a time to pout, it’s time to even work a little harder, and then you go off and take someone’s job, you know, it’s a competitive business.”

It didn’t take long before Gerald gave the Minnesota Wild Coach little choice but to call him up to the big club. Through the first four games of the season, Mayhew was tied for the AHL lead in points with six, scoring three goals and adding three assists.
“I wanted to be ready. This is my time to shine,” Gerald explained in an interview on October 9. “You don’t want anyone to get hurt, but you have to shine to get your shot. I am going to be ready if they call me.”
That opportunity came on October 13 when the Minnesota Wild called up Gerald Mayhew. It did not take long for the forward to show he belonged as Gerald scored the first goal of his NHL career with a little over a minute left in his first contest. The rebound goal was the epitome of Mayhew, who prides himself on being the guy who does the grunge work around the net.
“I’m a competitive guy. I like battling in the corners or in front of the net. I am not going to let anyone outplay me for the puck. I know it is all about hard work.”
ARVE Error: need id and provider

Gerald is working hard every time he takes the ice, but this is not a job to the Minnesota Wild forward. Hockey is the game he loves, and that passion for the sport makes him try that much harder.

“I’ve always had to prove myself since day one. I think that’s good, because it pushes me to work even harder.  I just now I love the game so much that I wouldn’t want to do anything else. So, I think if you have that enjoyment for something, it pushes you even greater.”

The Minnesota Wild are very close to overhauling their roster. At 1-6-0, they currently have the worst record in the NHL, and things look rather bleak. On the developmental side, this is going to give the Wild an excellent opportunity to take a look at the enormous talent they have in Iowa, starting with Mayhew.
The name Gerald means “to rule with a spear.”  Now that he earned this opportunity to prove his skills and energy belong in the NHL don’t be surprised if Gerald Mayhew is soon living up to his name, ruling the State of Hockey.