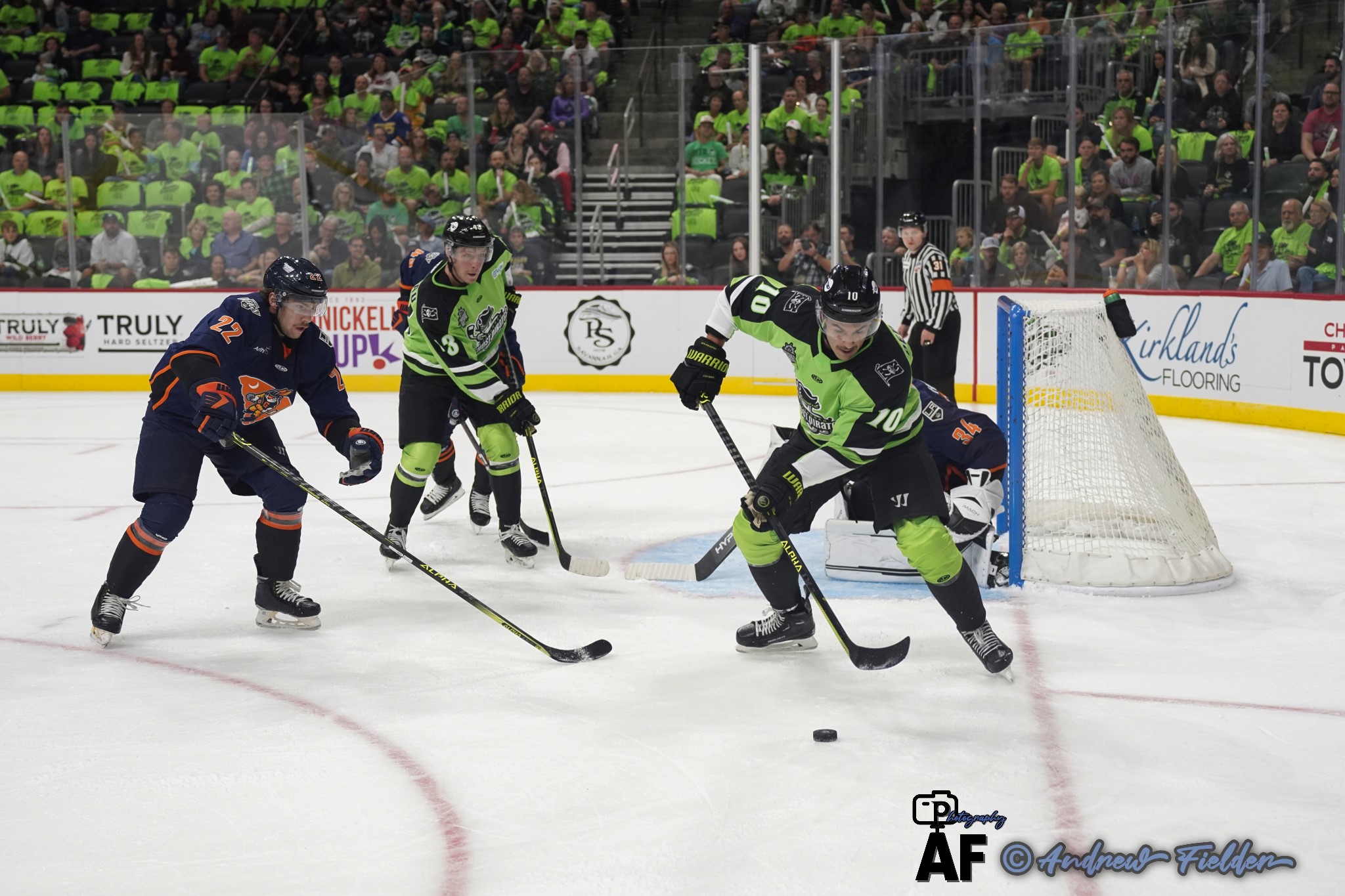 SAVANNAH, Ga. – There’s only one chance to make a good first impression, and the Savannah Ghost Pirates made a great one on Saturday night in the first home game in franchise history.

Playing in the recently christened Enmarket Arena, the wait and buildup for pro hockey in The Hostess City of the South ended on Saturday night, where the Ghost Pirates were rude hosts to Greenville, taking over a scoreless game to win 5-1 on the strength of three second-period goals. Brandon Estes scored a pair of goals for Savannah Isaiah Saville stopped all but 32 shots flung toward him by the Swamp Rabbits, coming within three minutes of a shutout.

“It was pretty sweet. Obviously, with a sold-out crowd and first game here in Savannah, it makes it a lot better when you win,” Saville said. “You always love to see that. The atmosphere was unbelievable.”

Savannah’s win runs its record to 5-1-0 with ten points, the most of any team in the south division. That’s two points better than Florida and South Carolina who were each 4-1 with eight points entering Sunday.

” I think the key was training camp, the way they came together from the first practice for a group of guys who came together that didn’t really know each other, they came together after practice and kind of just met in the middle,” Ghost Pirates head coach Rick Bennett said. “I’m not sure what chant it was, even if I knew, I couldn’t tell you. Right then and there, that kind of fed to the exhibition games in Jacksonville, and now it’s kind of bred of life of itself.”

Saturday’s win was also a bounce-back of sorts for Savannah, which the night before suffered its first loss of the season at Greenville, 3-2. But getting things started in the right direction began with a strong first period on Saturday, and it picked up steam following the opening 20 minutes.

“It starts with the crowd. After (Friday) we kind of needed a response game,” Bennett said. “I thought the atmosphere alone gave us some life, gave us some legs, and we kind of fed off that.”

The second period broke a first-period stalemate in which each team was even not only on the scoreboard by on special teams, too, killing off a pair of penalties on each side.

That all came to an end in the second period, starting with the Ghost Pirates pouncing on a turnover, one that lit the fuse of a frenzied crowd as Spencer Naas beat Greenville goalie David Hrenak 3:42 into the period of the first goal in Enmarket Arena history.

“This game was pretty hyped, we’d been hearing about it for a long time. I think there was a lot of excitement and anxious energy,” Naas said. “We played a pretty good first period, we knew we played well and in the second, the floodgates opened.”

Spencer Naas scored the first home goal in @SavGhostPirates history on Saturday. Here’s some of his post-game thoughts pic.twitter.com/Qet5lqKdCi

Savannah kept the pressure up, getting advances into the Greenville zone. That persistence paid off just 1:02 later when Estes scored his first of two goals, getting a pass from the right by way of Brent Pedersen and Pat Guay. 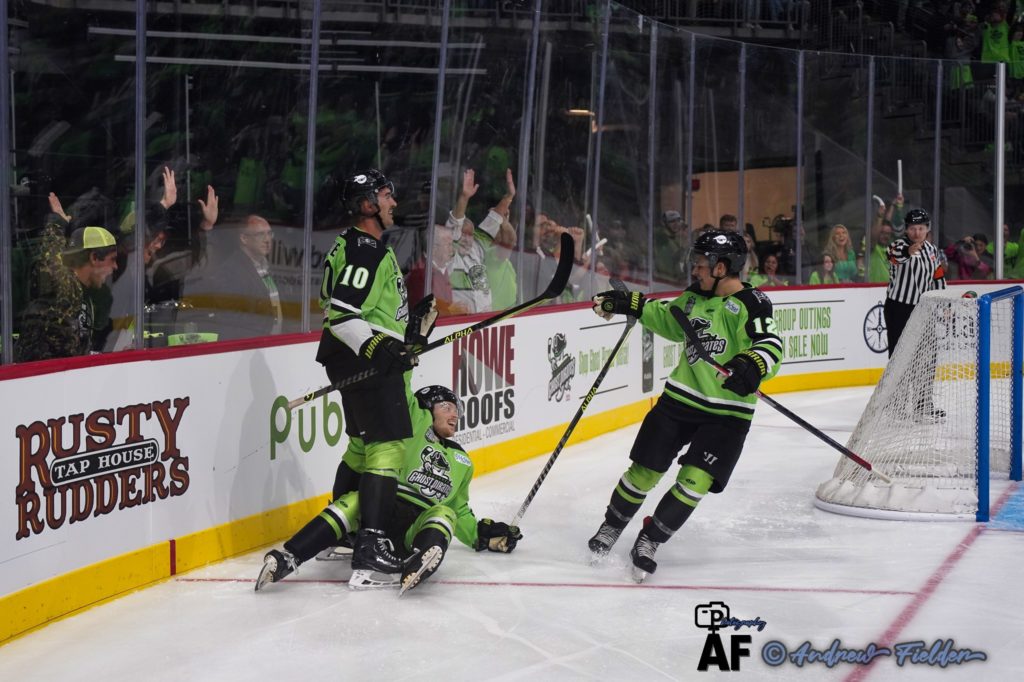 The Ghost Pirates were not finished pouring it on. They made it 3-0 8:40 into the second, getting a goal from Guay on an assist from Marshall Moise and Tristan Thompson.

With a multi-goal lead, one stated goal for Savannah was to finish the final 20 minutes strong. That mission was accomplished.

A lead in hand, the Ghost Pirates were able to aggressively forecheck. That led to success on the opposite end, too, as shown by a pair of scores in a minute span, one from Estes on an empty net at 14:43 and another at 15:19 thanks to Daniel D’Amato with Thompson and Vincent Marleau at the third period’s 15:19 mark.

Brandon Estes talks about the @enmarketarena energy and his two-goal night in the @SavGhostPirates 5-1 win #ECHL pic.twitter.com/jwiDzoL5t3

Greenville got on the board late, getting a shot past Saville on a score by Ayden MacDonald.

Isaiah Saville got the win in net on Saturday for the Ghost Pirates. Here’s his post-game visit with the media pic.twitter.com/4sxTUnvZ0D