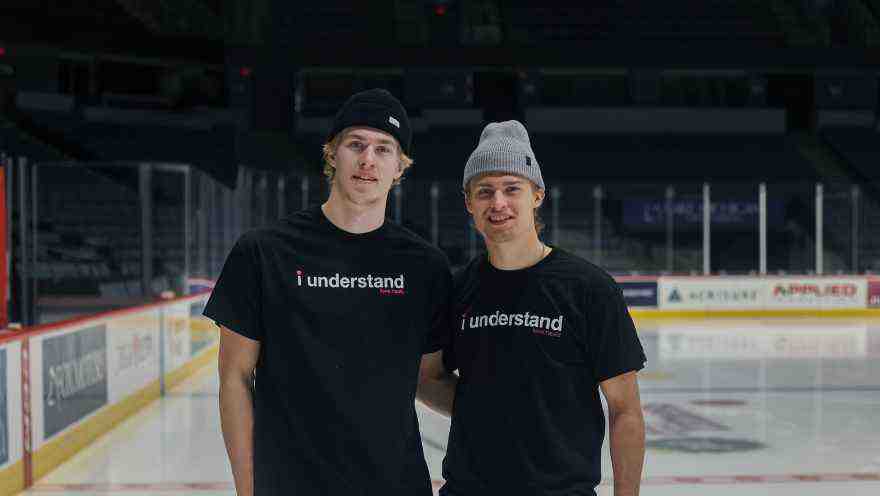 #AHL | The @griffinshockey look to change the conversation on mental health on Saturday night as they host the @TexasStars. @FPHGriffins opens up how a local non-profit teamed up with the team to make this night happen:

GRAND RAPIDS, Mich. – There has been a marked shift in the conversation of mental health awareness since March of 2020 coinciding with a worldwide shutdown as a result of the Covid-19 pandemic. With most of the world stuck in their homes, the stresses and anxiety of an uncertain future took a toll on everyone’s mental health, and with it came a surge of awareness and action.

For Vonnie Woodrick, the fight began twenty years ago.

Woodrick’s husband died of depression in 2003. If that sounds like an unfamiliar or strange sentence, it’s because we’re used to hearing the phrase “committed suicide” in our everyday conversations. Woodrick, along with her non-profit organization i understand, aim to change the way we think and converse on these issues, and the Grand Rapids Griffins will help by hosting their second annual Mental Health Awareness night for Saturday’s game against the Texas Stars.

Facing the tragedy of losing a husband and father, the Woodrick family responded with all that they could give: love.

“Eight years ago, we as a family decided to print t-shirts that said ‘I understand love heals’ and we gave them away.” Woodrick said. “Within six months I had Helen DeVos Children’s Hospital chief of pediatrics reach out to me.”

From simply giving t-shirts away to those in need, i understand grew to be able to fund the first in-the-country nurse specializing in mental health in a traditional setting at the Helen DeVos Children’s Hospital. Their work wasn’t done there – their biggest need was a sensory room for children who are at risk of harming themselves or others.

i understand was able to fund one of the first sensory rooms in the country in a hospital for those children.

Saturday’s game at Van Andel Arena will not only offer sensory rooms but will have staff from the DeVos Children’s Hospital on-site with information sheets on how to deal with sensory issues.

“I’m so excited that the Griffins have acknowledged the need for mental health and sensory awareness. Whether you’re a child or an adult, noise sensitives can really impact your ability to go to the game. Having a sensory room at the game is kind of a big deal to me.”

This Saturday, Jan. 7th is our 2nd annual Mental Health Awareness Night with the help of i understand. The game will be sensory-friendly, with decreased auditory and visual stimulations in consideration of those with sensory sensitivities.

Saturday’s big night will offer a number of different ways that the Griffins are raising awareness. A sticker on their helmet will show support for people struggling with mental health issues, while the team encourages fans to share their thoughts and experiences on social media to open up the lane to a conversation on said issues.

Woodrick wants to change the conversations that we have, starting with how we define it. i understand’s Definition Petition helps by breaking the stigma of suicide and mental health by redefining it.

Talking about depression for what it is – illness – starts to shift the way that we perceive and talk about the pain. It also shifts the way we approach how to heal.

For Woodrick, that’s the one thing she wants fans with to walk away with on Saturday night.

On the ice, hockey is as much a mental game as it is a physical game. Getting a locker room on the same page with the ups and downs of the season is never easy to manage. Griffins captain Brian Lashoff knows how important it is to take care of his teammates off the ice as well as on it.

“I think being cognizant of what your teammates are going through, it can be an emotional roller coaster through the season.” Lashoff explained. “The ability to have a room that is able to recognize how to pick each other up whether young or old is important.”

Lashoff also recognizes the importance of having a night where mental health is at the forefront of everyone’s minds from players to coaches and especially fans. He credits the Grand Rapids organization for being involved in the community to get everyone involved in the discussion.

“I think our front office is the best in the league at getting players out into the community and having a presence in the city. Speaking to kids at hospitals and at schools, its huge for us. They can talk to us and see us without our pads. It encompasses the relationship we have with the community.”

With that leadership role on the ice, in the locker room, and around West Michigan, Lashoff understands how crucial it is just to have someone to talk to when dealing with issues of our mental health. The path to healing begins with understanding, and the path to understanding begins just with being there.

“People in general, no matter what you do for a living, being someone that other people feel comfortable talking to about anything opens the door to have them to turn to. In my position, being able to be someone that any player of any age can come talk to me about anything is a starting point for making sure everyone is in a good place mentally. When it comes to a team, you have all different types of personalities and having as many people in the room as possible that know that you’re there for them – and vice versa – is the best way to go about things.”

Having a night where that is a premium is one that Woodrick is looking forward to.

“It’s going to be a fun but also meaningful night.”