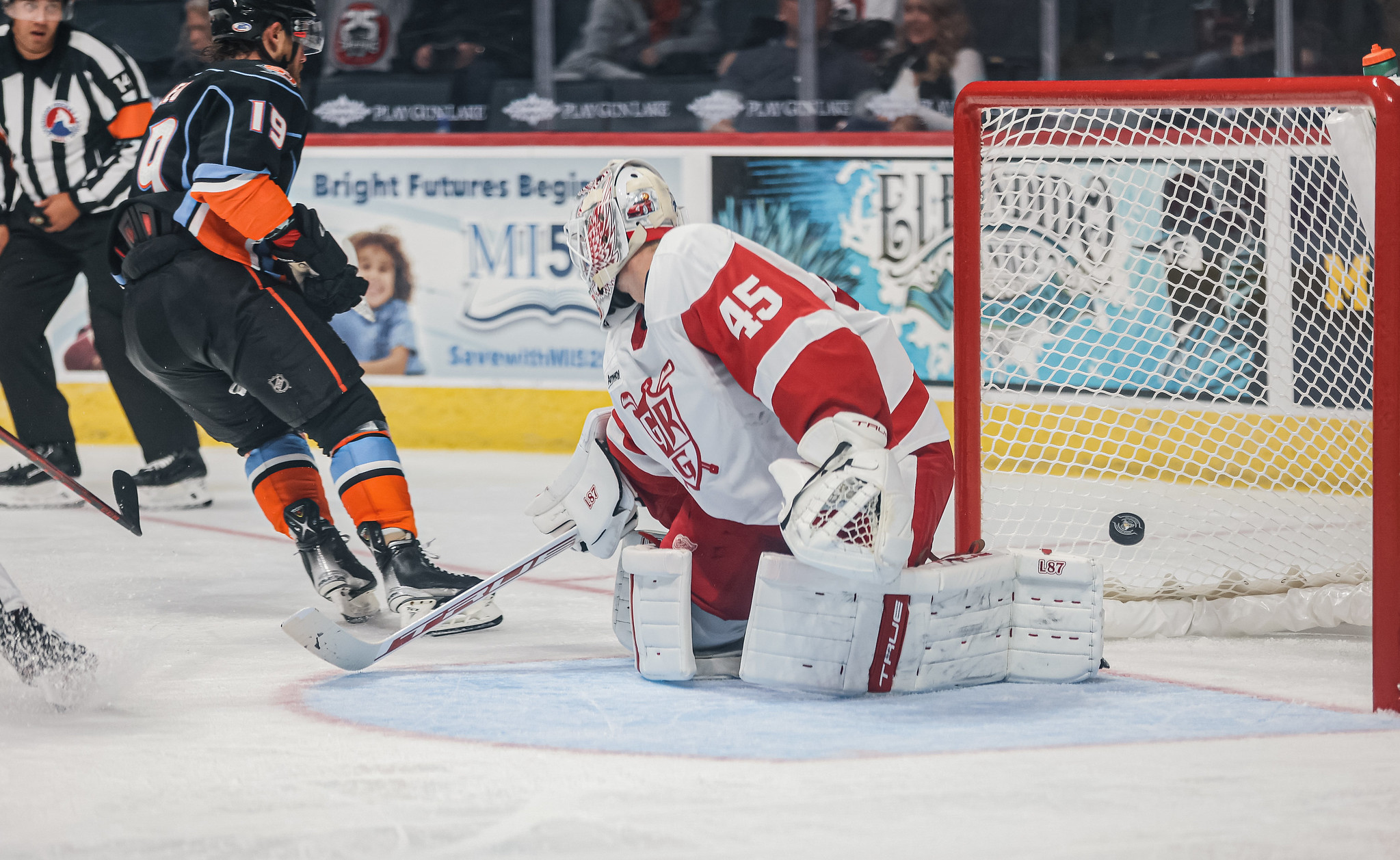 Chase De Leo gets one past Jussi Olkinuora on the breakaway (Photo Courtesy: Nicolas Carrillo)

GRAND RAPIDS, Mich. – The doors of Van Andel Arena opened on Friday night to an atmosphere of anticipation with 10,834 Griffins faithful packing the stands. With last season’s finish firmly in the rearview mirror and with a roster featuring fresh faces mixed with a veteran core, the Griffins looked to turn over a new leaf to begin the season.

Featuring a slew of new faces from Olympic Gold-winning goaltender Jussi Olkinuora to top 2021 draft pick Simon Edvinsson, there was a different feel to this Griffins team before the puck was even dropped. Welcoming in a unique opponent from the Pacific Division in the San Diego Gulls, the excitement in the building was palpable for a contender in Grand Rapids.

However, the visitors had other plans. The Gulls pounced on the Griffins, spoiling their home opener by the final of 6-2 to open the 2022-23 season.

San Diego would be the first to break the ice in this one just over three minutes into the game that started off sluggish. On the rush, a shot from the right wing by Austin Strand would bounce off Olkinuora’s pad and Hunter Drew would beat the defense and bury the rebound to give the visitors the opening marker.

Hunter Drew with the only conversion in the first period, burying this early rebound chance to give the visitors the lead #SDvsGR pic.twitter.com/fntbKtiCEB

Head Coach Ben Simon was concerned with his team’s start in putting themselves behind the eight ball, outshot by the Gulls 11-4 in the opening frame.

“The first period we were on our heels a little bit. We talked about playing a little faster. You’re allowing teams to get into their structure and get above you.”

The Griffins weren’t without their looks in the first frame – newcomer Matt Luff had a great rush chance on a pretty feed from last season’s leading scorer Jonatan Berggren, but was denied by a brilliant stop from Gulls goaltender Lukas Dostal. On an ensuing powerplay, both Berggren and Joel L’Esperance beat Dostal but not the iron, and as a result San Diego went into the intermission leading 1-0.

The middle frame began with adversity for the Griffins in a number of forms. Just over two minutes into the period, San Diego’s Benoit-Olivier Groulx found himself with the puck in all alone, and while Olkinuora stopped the first chance, Groulx was able to finish the rebound to put the Gulls up 2-0.

Less than two minutes later, Josh Healey hammered an unsuspecting Berggren into the boards with a dangerous and blindside hit that earned Healey a five minute major penalty. After the game, Luff expressed his displeasure with the play.

“I think that hit was just such a bad play. Like how he says ‘he should have his head up,’ I don’t know how you expect him to see that. I think that hit’s just a joke. I think that’s a dirty hit on one of our best players. I’m not happy with that hit at all.”

Luff would respond with his stick, taking a feed from Edvinsson and wiring a shot past Dostal to cut the Gulls’ lead to 2-1 on the extended power play. After signing a two-way deal with Detroit, Luff was looking to beat the nerves of joining a new team.

“Coming in to a new team, new place, you want to set the tone with what you can bring. Parts of my game were pretty good but coming in tomorrow, it’s got to be a lot better. Bear down on some more chances, but I think for our first game with some new guys it’s not bad. Got to build on it and got to get a win.”

Despite having over four minutes of time on the major penalty to work with, the Griffins couldn’t find the equalizer. Instead, shortly after Healey’s penalty expired, the Gulls would counter. Gulls captain Chase De Leo got behind the Griffins’ defense and beat Olkinuora on the breakaway to extend San Diego’s two goal lead at 3-1.

The Griffins then dug their hole deeper. Three straight minor penalties in the span of 22 seconds of game time gave San Diego the opportunity to drive the dagger in, and Justin Kirkland would do so with a short side shot that Olkinuora would like to have back.

Despite the 4-1 score, the Griffins weren’t going away easily. With three minutes to go in the period, L’Esperance took a nice feed from Jared McIsaac at the side of the open net and was able to bury this chance for his first with Grand Rapids. Tyler Spezia had a fantastic chance to draw the Griffins within one just before the end of the period, but Dostal slammed the door shut and the 4-2 score would hold until intermission.

The final frame wouldn’t be any more kind to the Griffins, however. Chances were a struggle to come by – especially considering the absence of Berggren, who left the game following the Healey hit – and when they did find the time or space Dostal was on point.

With just over 7 minutes left, De Leo picked up the rebound of a Drew shot for his second goal of the night to cement this game away at 5-2. Adding insult to injury, Nikolas Brouillard fired a screened shot past Olkinuora with 41 seconds remaining to give the Gulls a 6-2 victory by the final buzzer.

“I thought our PP moved the puck around pretty well at times, and honestly I thought our PK was good. All in all I thought our special teams were okay. Lot of good stuff there to build off. I think this team could have a good blend of veteran leadership, some young exciting skill, and a good combination that compliments in different ways. It is an evolving puzzle and we knew we weren’t winning a Calder Cup today. It doesn’t matter where you start, it matters where you finish.”

“I want to bring my game to Detroit, and I feel like I can start here and develop my game here.” Edvinsson said. “I don’t want to be up there and survive, I want to be the best me up there. Of course it’s not going to take one game, it’s going to take time and right now I’m here and I want to win with this team.”

“Very raw.” Simon said of his first impression of Edvinsson. “He’s got elite skating ability, he’s got elite hockey sense, he’s going to be one hell of a hockey player. We’re going to try him in different situations. I’m sure he is disappointed about being sent down. He’s not the kind of kid to drag his lower lip and get frustrated, but there is a lot of emotions go into this.”

“If you look back a few years ago with [Mortiz] Seider, he didn’t exactly come in and light the league on fire. We’ve worked with guys like Seider that have gone through the same things and you see where he ends up a couple years later. We have confidence that we know how to develop him.”

These two teams faceoff again at Van Andel Arena on Saturday night at 7 P.M. EST. The Griffins will then play host to the Milwaukee Admirals on Wednesday night before kicking off an 8 game road trip.