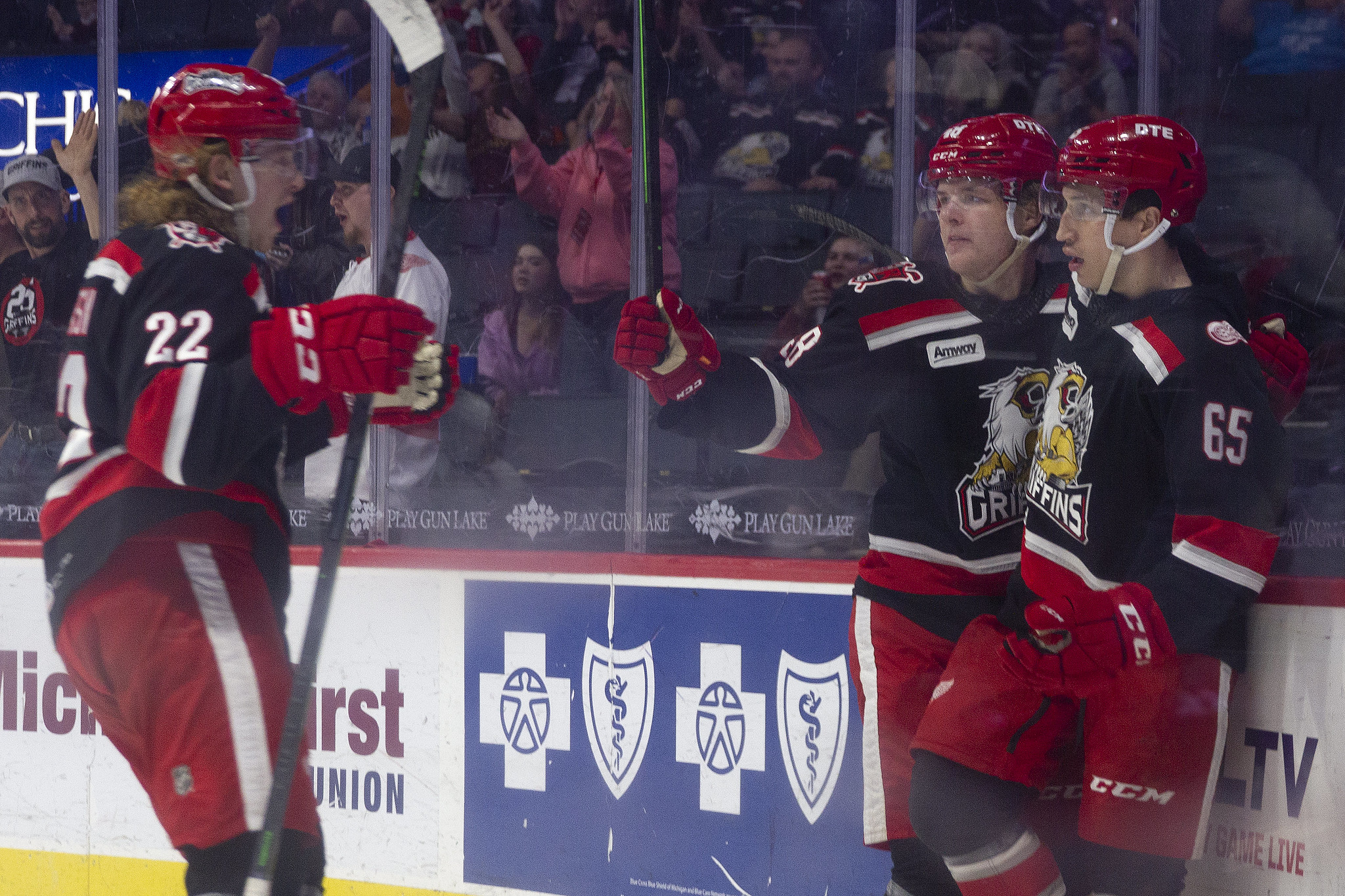 GRAND RAPIDS, Mich. – Going into Friday’s contest with the Iowa Wild, the Grand Rapids Griffins find themselves seated at the bottom of the Central Division. Following a road trip to the west coast at the end of March and a two-game sweep at home to the hands of the rival Texas Stars – a stretch that saw Grand Rapids go 1-6-1 and drop out of a playoff spot – the Griffins’ playoff hopes looked to be all but dashed.

Currently, the Griffins sit at a .500 point percentage – the determining factor in a team’s fate in the standings for this season. Iowa holds a .515 percentage, while the Griffins and Texas are tied at .500. With six games remaining on the schedule, time is running out for Grand Rapids, but that’s not to say that their hopes are completely dashed. The Griffins have had stretches this season where they’ve played some great hockey – namely when players like Taro Hirose and Kyle Criscuolo aren’t being bounced back and forth between Detroit and Grand Rapids.

With only a few weeks before the postseason begins, what does Grand Rapids have to do to replicate some of their early season success and claw back into the postseason?

Jonatan Berggren’s first year in North America has exceeded even the lofty expectations put in place for the high second round pick in 2018. As the season has gone on, Berggren has not only flashed the excellent playmaking that’s made him one of the most exciting prospects in the Detroit system, but he’s continued to grow in confidence and in strength for puck battles along the boards on the tighter North American surface. In the absence of Hirose, who was Grand Rapids’ leading scorer at the time of his callup, Berggren turned his game up to another level. Berggren scored three goals and added 12 assists in the last 13 games, second only to veteran sniper Riley Barber in scoring in that span.

Jonatan Berggren continues his great rookie season as he tallies his 8th head-to-head point against the Monsters with this game-tying tally.

For the Griffins to get over the hump, they will continue to have to rely on the 22-year-old rookie. While Berggren’s known to drive the offense – he’s had a point in half of the Griffins’ goals scored this month – as the intensity ramps up and the Griffins try to chase down the teams in front of them, his game will have to continue to grow. To find success down the stretch, Berggren will have to continue to tune into the physical game that he’s been more and more active with as the season’s gone on. If the Griffins are to have any hope of making the postseason, Berggren is going to have to be every bit of that special player that the Red Wings management believes him to be. Head Coach Ben Simon believes that, even with the incredible offensive talent he’s brought, Berggren still has more to unlock in his developing game.

“Berggy’s done a tremendous job of developing his 200 foot game. He’s starting to figure out on a more consistent basis on how to have the puck even more. I think he can reward himself even further by getting even more greasy, gritty in the net front.”

If Wednesday’s huge win over the Cleveland Monsters was any indicator, Berggren welcomes that challenge.

“I think you need to love the moment” Berggren said. “We know we’re in a tough situation but I feel like every guy here loves this. We take it one game at a time.”

Special Teams Need to be Special

The Griffins’ special teams when up or down a man have had issues finding their sync. While their power play is one of the top 5 teams in the AHL in generating chances, they are ranked 28th in converting on those chances at just 16.3 percent on the season. Their penalty kill hasn’t faired any better: ranked 29th when down a man. This has been a nagging issue for the Griffins dating back to last season, and one that’s struggled at both ends with the loss of top defender Ryan Murphy since mid-March.

There is no easy solution to remedy this issue – at least not one that the Griffins haven’t already tried. in Murphy’s absence, Jared McIsaac and Seth Barton have stepped in to man the point on the man advantage, though simply replacing the reigning AHL’s defenseman of the year is no easy task. A revolving door to the NHL keeping playmakers like Hirose up in Detroit puts more pressure on players looking to score on the PP and trading Luke Witkowski away to the St. Louis Blues rid the Griffins of one of their best penalty killers.

At the end of the day, it’s going to have to take a determined effort from all hands to make sure this team isn’t forced to have to battle back at even strength just to secure points. With Calvin Pickard up in Detroit, the role of the best penalty killer on the team is passed to Victor Brattstrom, who has had to battle for and has earned his position as the man in the crease to carry this team to the postseason.

“I want to be that guy.” Brattstrom said about becoming the #1 goalie for the Griffins. “I feel very comfortable and I feel like I can play every day. It’s so fun. I love to play these games.”

Victor Brattstrom literally standing on his head after the game and during the game, making 35 saves, not including the 7 straight in the shootout! #GoGRG pic.twitter.com/A6BoyRdG7F

Before Wednesday’s game against Cleveland, the Griffins had scored three goals in the month of April in which either Berggren or Barber didn’t factor in on them. All three of those goals came on April 9 against the Marlies, and one of them went into an empty net in the last minute of the game. To say that the Griffins need more offensive production throughout their lineup would be an understatement.

There does seem to be hope as of late. Local product Drew Worrad has put up three assists in four games since signing with the Griffins following the end of his collegiate career and he immediately provided an extra step on the forward lineup. Hirose’s return also ought to relieve some of the pressure off the other forward lines as well, opening more room for them to operate and succeed against easier defensive matchups. After several call ups and assignments for Criscuolo, on Wednesday he buried his first goal for the Griffins since January. Perhaps it’s a sign of things to come, or that’s what Simon hopes for.

“He does everything right.” Simon said of Criscuolo. “He does a lot of little things very well. When you’re playing a lot of minutes and afforded a lot of opportunity and not producing it’s tough. We’ve been trying to find ways to make him more effective. Was it playing him on the wing? Are we playing him too much, or too less? He works and competes extremely hard, so to see him finally break through a little bit here and be rewarded with a goal – it’s just great to hopefully have him use that as a springboard for the push that we’re going to need him for.”

Have to Find a Way

The Griffins finish up their schedule with a three-game series against the Central Division-leading Chicago Wolves. Their record against the Wolves this season, to be friendly, has been abysmal. The Griffins are 1-7-1 against their rivals from Chicago this season, with the singular win riding on Turner Elson’s overtime heroics in their last meeting. The Griffins have been outscored 32-13 in those nine games and will likely find themselves in a scenario where it’s do-or-die by the time they visit Allstate Arena in Rosemont.

Turner Elson ends it just :20 into OT to give @griffinshockey the win. pic.twitter.com/1TZKHDLObg

The silver lining here is that these games might be completely meaningless to the Wolves with the Central Division wrapped up. Perhaps some key players will be resting in anticipation of the postseason run or different personnel on their special teams will be seen that might give the Griffins the advantage. At the same time, the Wolves are a pro team that shows up each and every night playing at the highest level that we’ll see in this league and won’t make those points easy for Grand Rapids. No matter what the records or who is on the ice, Grand Rapids has to show up and they have to find a way to beat the Wolves.

Can it be Achieved?

The end of March/beginning of April posed a lot of challenges for the Griffins. They had a lengthy road trip against some of the best teams in the Western Conference. They lost their #1 defenseman (Murphy) to injury and their #1 goalie (Pickard) to callup. They’ve dealt with rotating lineups and have found it difficult to keep their main core of forwards together on the ice, and their recent record has reflected their struggles.

That being said, the Griffins begin the weekend with a home and home against the Iowa Wild – one of the teams they’re chasing for that last playoff spot. A couple of wins and they’re right back in it. Should it come down to it, their last game ends with a Cleveland Monsters team sitting last in their division that the Griffins have found consistent success against this season and last.

A long shot? Of course, but the math says don’t count these Griffins out yet. Even as the stretch run gets tighter and these games get more intense and stressful for us as fans, coach Simon has a simple message for the guys in the locker room:

“I think when you take a step back, whether we make playoffs or not at the end of the day this is a pretty damn good job you have here as a player or coach or member of this organization. Come in and value that every day. Life could be a heck of a lot worse. Come in here, work, do your job, have fun doing it. It’s pretty simple”