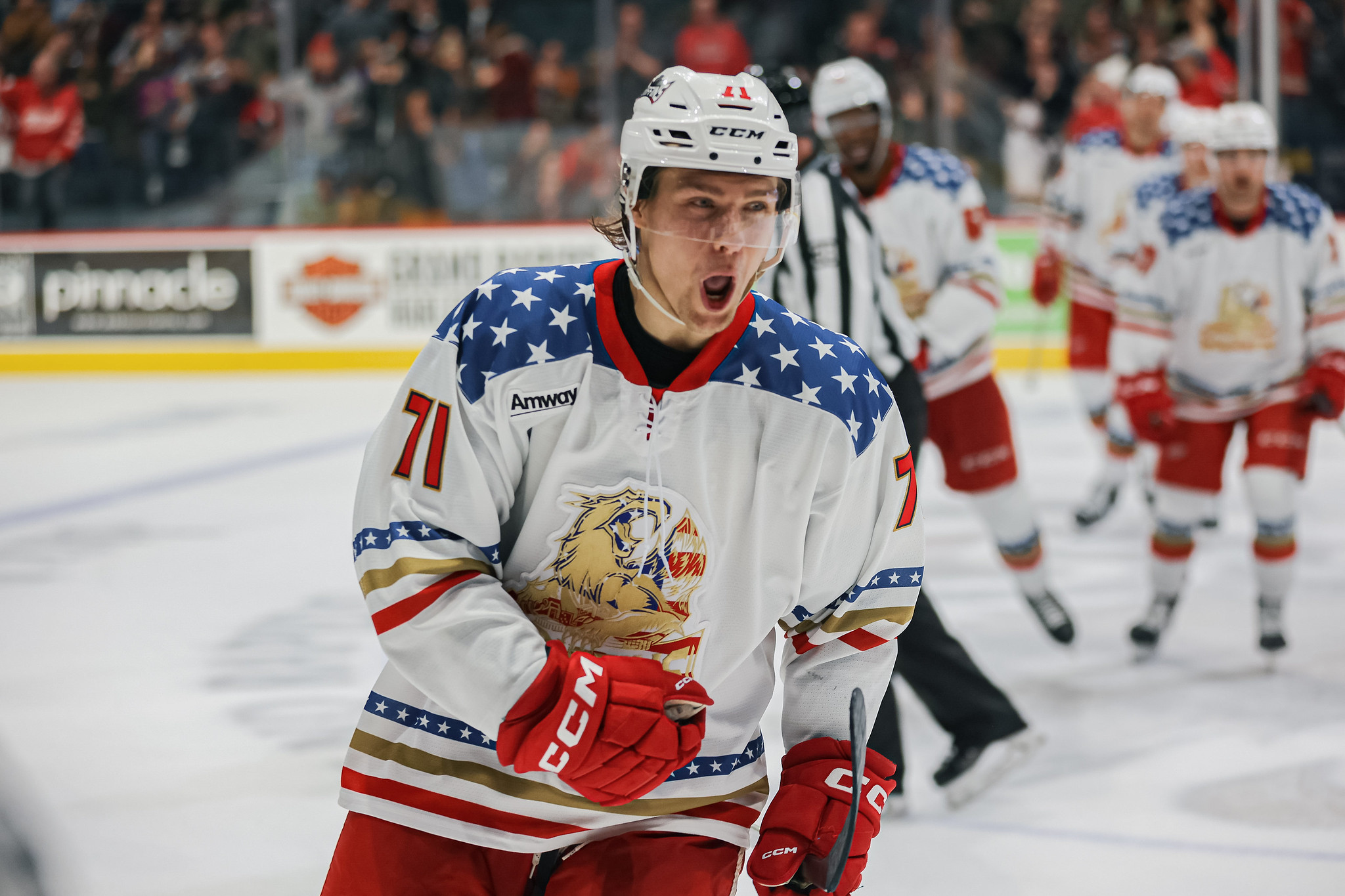 GRAND RAPIDS, Mich. – The first month of the 2022-23 season wasn’t kind for the Grand Rapids Griffins. Following their first three games of the season at home, the Griffins embarked on an eight-game road trip that spanned nearly a calendar month. As if life on the road wasn’t hard enough – the Griffins finished off with a 3-5 record during that stretch – the team was also shorthanded with a slew of call-ups.

Veteran free-agent acquisitions meant to shore up the depth of the Griffins were instead being recalled to Detroit. With Matt Luff and Austin Czarnik already in Detroit, further injuries saw last year’s leading scorer Jonatan Berggren heading to the Motor City to make his NHL debut.

With the Toronto Marlies coming to town sporting the second-best record in the American Hockey League, the road ahead wasn’t getting any easier for the Griffins. The message from Ben Simon that resonated with those that remained in the locker room was to take advantage of the opportunities provided by the extra ice time.

Boy, did Cross Hanas ever.

How the West Was Won

Coming into their first home weekend in nearly a month, Hanas had already established himself as an offensive contributor in the Griffins’ middle six with 7 points in his first 11 professional games. Hanas, a second round pick of the Red Wings in 2020, can trace the roots of his success to the four years of junior hockey in the Western Hockey League with the Portland Winterhawks.

“I was fortunate enough to be in a great spot with a great organization. One of the top [teams] in the whole CHL for producing players. The coaching staff was amazing, the whole organization was first-class from top to bottom. Everything from the fans to everyone in the organization, it was a great spot for me.” 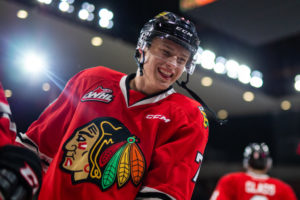 Graduating from juniors to professional hockey at 20 years old can be a difficult transition for many young players, no matter the talent level. For Hanas, however, the transition has been nearly seamless and he credits the Winterhawks for helping him prepare for it.

“Obviously the jump from juniors to pros is a lot. Lot of bigger, stronger, faster players. The decision-making is quicker. Everything is that next-level. I think coming from a great organization, I think they prepped us a lot with a very professional way they taught us things in Portland. I feel like I was ready for it, but obviously getting those experiences playing pro has been really good for the first twelve games now.”

With the loss of an entire forward line up to Detroit, Hanas would need every bit of that experience as a high-powered Toronto Marlies team came to Van Andel Arena.

With the loss of Luff, Czarnik, and Berggren, the door was open for the rest of the lineup to step up and contribute with an opportunity to make a statement against a top team like Toronto. The moment wasn’t lost on Hanas.

“Obviously I’m very excited for those guys. They deserve to be up there. What they’ve done in this league has been incredible so it’s really nice to see them go up there and have success. Whatever it is, it’s the next man up mentality and I was fortunate enough to get to have that for myself. Just trying to make the most of it.”

The Griffins didn’t make life easy on themselves in the first game of the series, trailing 4-1 to the Marlies after two periods. Hanas started the rally with a steal in the offensive zone and feed to Pontus Andreasson for the first score of the third period. Hanas would assist on Andreasson’s second to tie the game beneath the roar of a raucuous crowd.

“Obviously those were pretty tough games to have. Coming back to the crowd was awesome. It was great to have fans cheer when we did something good. It’s been a while since that’s happened. I played in a lot of great barns [in the Western League]. Van Andel is obviously one of the best ones in the AHL too, so it’s right up there kind of what I’m used to. It’s really fun to play in front of electric fans like that.”

Electric was the word of the weekend – Hanas finished up his Friday with an OT goal to complete the rally and an unbelievable comeback win for the Griffins, earning first star honors with his first three-point performance of his young professional career.

“It was crazy. We knew they were a very high-powered team. We’re down 3 but we knew if we just kept fighting, we weren’t going to quit and we could get back in the game. One will come and once one comes, two will come, three will come. Fortunate enough it happened and we got to capitalize in overtime, which was really cool, especially in front of the home crowd. It was really electric in there.”

After an incredible performance like that, you’re almost guaranteed a let down, right? Maybe for most rookies in the league, but Hanas knew not to rest on his laurels – another sage piece of advice from Head Coach Simon. Turning the page over to Saturday, the Griffins again found themselves down 2-1 in the third period. With just nine seconds left on the clock, Hanas put his hero cape on again, scoring on a one-time blast to tie the game up before an electric Van Andel Arena and a stunned Marlies bench. He’d done it again.

While the Griffins ended up dropping the extra point in overtime, the statement had been made. Hanas had arrived, and the Griffins weren’t going away quietly no matter who they lined up against.

For the 20-year old, it has been a weekend unlike he’s ever had before.

“In juniors I was more of a distributor kind of guy. I don’t know if I’ve really scored like that in a stretch like that. Right now, the puck just seems to be finding the back of the net for me. Just going to keep shooting, keep trying to pucks on net. Keep trying to create stuff, and if it keeps going in for me it will be good for the team.”

Living in the Moment

Fortunes can change quickly in professional hockey. The tides can ride just as high as they can low. The kind of edge the Griffins brought with them this past weekend is the kind that can define a season or a locker room, and the never-say-die attitude of the competitors in that lineup made the kind of success Hanas had happen.

One of the harder aspects of this sport at this stage is to have a short-term memory no matter the result, to not ride the wave of emotion for too long and to get on to the next one. As Hanas continues to grow as a pro player on and off the ice, no matter how high or low those tides get, he’ll know not to keep his head in the clouds for too long.

Even after the weekend he’s had, Hanas is already on to the next.

“You got to turn the page every single game. We’re getting ready for Rockford on Wednesday.”