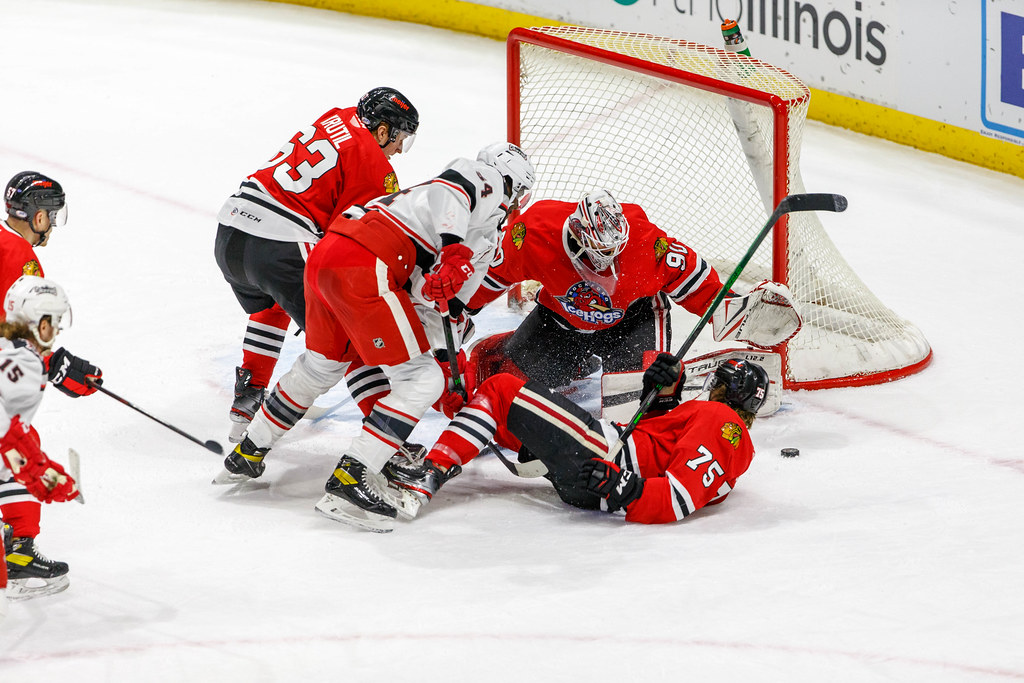 ROCKFORD, Ill. – The Rockford IceHogs have started their season with five straight losses after being worn down by the visiting Grand Rapids Griffins on Thursday night. The IceHogs offense was mostly silent in a 3-1 loss at the BMO Harris Bank Center.

Rockford falls to 0-4-1 with the defeat. Grand Rapids improves to 2-2 in the first of eight meetings between the Central Division rivals.

The Griffins came out firing, outshooting Rockford 8-2 in the opening minutes on the way to a 12-5 shot advantage in the first period. Grand Rapids had several chances in two power plays in the first, only to be nullified by some off-target passing.

IceHogs coach Derek King found his team in a similar situation to Tuesday night, which saw Rockford drop a 3-2 decision to Chicago.

“We’re slow starting; when you’re playing some good teams with some good players, they’re going to eat that up…and they did. We didn’t even get out of our end the first ten minutes,” King said.

The two Central Division rivals traded goals in the second stanza. The Griffins Michael Rasmussen got his blade on a Dennis Cholowski shot just over a minute into a Grand Rapids power play. Hogs goalie Matt Tomkins could only watch as the puck entered the net. The Griffins led 1-0 at the 4:33 mark.

Rockford drew even just after a man advantage of their own expired. Rookie Alec Regula pounced on a rebound of a shot by a Chad Krys shot from the point. Gathering in the puck, Regula beat Grand Rapids goalie Kevin Boyle to the left side of the Griffins net. The score was even at a goal apiece at 13:34 of the second period.

The game remained tied until the Griffins Riley Barber worked his way into an open look from the slot. Taking a pass from Taro Hirose, Barber sent a wrister over the blocker of Tomkins for a 2-1 advantage at 7:13 of the final period.

Rockford, who managed just 13 shots for the contest, had a huge chance for an equalizer midway through the third. However, the IceHogs came up empty on a power play that included almost a minute of a five-on-three advantage.

Tomkins, who stopped 26 of 28 shots in the game, was pulled with 2:12 remaining during Rockford’s timeout. The Hogs lost an offensive zone draw, leading to an empty-net goal by Chase Pearson that made it 3-1 Griffins with 2:01 left.

Jon Fromi covers the Rockford IceHogs for The Sin Bin. Follow and interact with him at @SinBinHogs