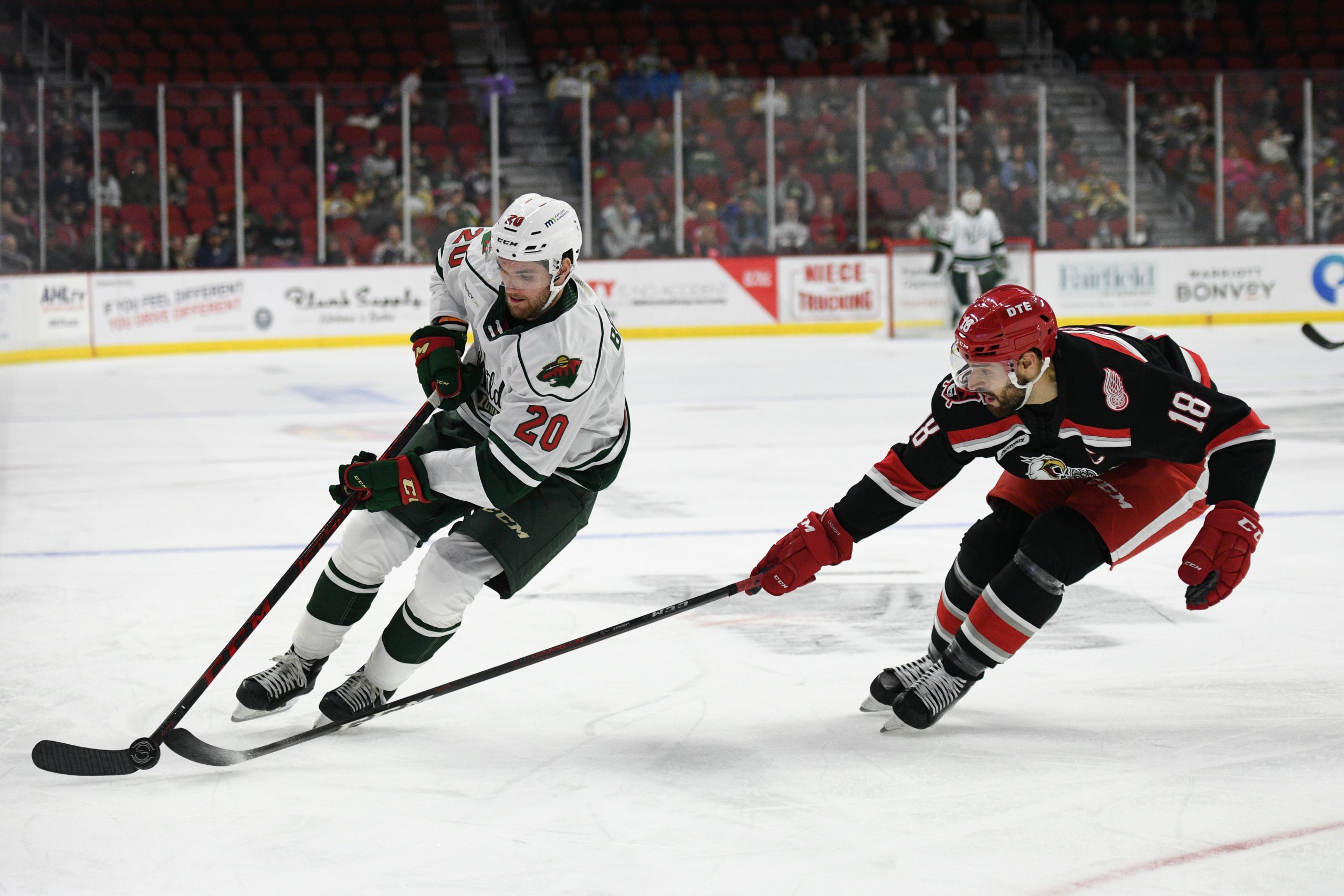 DES MOINES, Iowa – After dropping two of their last three games played at their home arena, the Grand Rapids Griffins found themselves on the road to start the month of November for a pair of divisional matchups. Their first saw them going up against the Iowa Wild, who sat second in the Central Division with a record of 4-2. The Griffins, who had lost their first three road games of the season, desperately needed these points to get back in the division race.

The dependable Calvin Pickard got the start for Grand Rapids, while Iowa veteran Andrew Hammond got the call in front of the raucous home crowd. With an Iowa team that had been scoring in bunches and a Griffins team that had been giving them up in the same fashion, this game had the potential to be blown wide open and required a strong effort from the visitors to steal two points Friday night.

The fireworks got going in Des Moines, and the intensity would only ramp up as the game went on, with major implications for both teams.

The first half of the period was a process of both teams feeling each other out and how they intended to approach the game. Chances were traded, but the defenders of both squads were able to keep the shots to the outside to help their goaltenders out. It wasn’t until the 10-minute mark that the first quality chance came on net from Grand Rapids’ Hayden Verbeek, whose shot was tipped by Ryan Murphy to put the visiting team ahead 1-0. Murphy, a defenseman, perhaps caught the Wild defense off guard by putting himself on Hammond’s doorstep and in prime position to put the chance away. Since coming over from Henderson in the offseason, Murphy’s offensive instincts and skill on the point have put him near the top of Griffins scorers.

As we head into overtime, here's a look back at Murphy's goal that started it all: pic.twitter.com/XP1VWhMHTq

The lead wouldn’t last long, however. With Dan Renouf sitting for a holding minor, Iowa’s potent power play was given a chance to strike, and they took advantage with a Jon Lizotte one-timer beating Pickard on a great pass from Will Bitten. Former Griffin Dominic Turgeon, who spent the last five seasons in the Detroit/Grand Rapids organization, got a secondary assist on the goal.

With momentum, the Wild pressed the attack and in the last few minutes of the period, found themselves with a glorious 3-on-1 chance. Pickard, however, read the play perfectly to slide across and come up with a huge positional save to preserve the tie going into the intermission with both teams fighting and banging away for every puck they could get to in this tight contest.

With Tyler Spezia still sitting from a minor taken at the end of the first, the Wild went back to work on the man-advantage. Just fifty seconds into the period, Mason Shaw picked up a loose puck and put it past Pickard, giving Iowa a 2-1 edge early in the period with two power-play goals. Both teams would trade chances on the man advantage, as Iowa’s Calen Addison and Kris Bennett sat for minors along with the Griffins’ Riley Barber. Still, neither team could convert after Shaw’s goal despite some glorious looks from both sides. The best look for Grand Rapids Taro Hirose, who deftly faked a pass across and put a grade-A chance on net that was just stopped by the quick pad of Hammond.

Iowa ended up getting a fantastic chance when Jonatan Berggren hooked Shaw on a shorthanded breakaway during the Bennett minor, awarding the Wild forward a penalty shot with a chance to take control of this game. Pickard, however, was up to the task with a quickly closing five-hole to deny Shaw his second of the game and keep the Griffins within striking distance.

That save would look every bit as massive as it was when Hirose was found by Chase Pearson on the doorstep, finishing the great feed with a well-placed shot to beat Hammond and tie the game at 2-2 with 2:08 to play in the period. Hirose had been flying all over the offensive zone in this one and finally was rewarded for his efforts. That 2-2 score would hold through the last few seconds of the period and into the intermission, and the water was just beginning to boil on this one.

Buckle your seatbelts – this might end up being the most action-packed period of hockey this weekend.

Just a minute into the period, an odd-man rush gave Berggren a clean look at the net, but the puck just barely skimmed over the crossbar and wide. As the puck got dumped into the Griffins’ end, defenseman Jared McIsaac moved into the corner to clear the puck away from the forecheck of Wild captain and veteran Cody McLeod. With the numbers facing him the whole way, McLeod slammed McIsaac into the boards. McIsaac, who had been battling back from two shoulder surgeries and a horrifying hit from behind in Traverse City’s Prospect Tournament that saw him being stretchered off the ice, was slow to get back to his feet. It didn’t take long for the officials to come together and assess McLeod a major penalty, ending his night and giving the Griffins a 5-minute power play.

The power play, however, couldn’t have begun any worse for Grand Rapids. With Pearson being called for a high stick almost as soon as the puck was dropped, the aggressive Wild PK allowed Shaw to skate into the slot and beat Pickard on the far side with a shot the Griffins goalie is sure to want back. Just 13 seconds into the major, and it was Iowa up 3-2 in quite the reversal of the script. However, Grand Rapids would respond as Hirose found Barber again next to Hammond’s crease, and unimpeded Barber banged it home to tie the game at 3 with 3:26 still to go on the major penalty. The Griffins were given ample opportunity as Kyle Criscuolo and Barber had their own chances but either misfired the puck or hit the crossbar, and the Wild could skate out of the major penalty still tied up.

A few minutes after the penalty expired, the hustle of Turner Elson forced a turnover in the Wild defensive zone, where he beat Hammond with a high shot to give Grand Rapids the 4-3 lead with just over 10 minutes to play. Just two minutes later, that lead would be extended as an aggressive Wild pinch yielded a 2-on-1 going the other way for Grand Rapids, with Kirill Tyutyayev threading a perfect pass to Verbeek, who beat Hammond for a 5-3 Griffins lead.

However, the third period hasn’t been kind to Grand Rapids so far this season, and this one exploded in their face. Another minor penalty taken by Jon Martin gave the Wild (with Hammond pulled) a 6-on-4 chance that Marco Rossi converted on with a top-shelf shot from a bounce off the end boards that cut the lead to 5-4 with just five minutes to play. The Griffins struggled to get the puck out of their zone after that, and tired legs opened up a lane for Joe Hicketts, who fired a shot from the point that Turgeon tipped, and Pickard failed to pick up the redirection for the tying goal with just under two minutes to go. Hicketts is also a former longtime Griffin, and there was a poetic pain in Griffins fans seeing that goal go into tie this game at 5-5.

The period wasn’t over yet, as Pickard had to step up and make some incredible saves to give his team a chance at a point in this one. With 19 seconds left, a Berggren rush ended in the speedy forward being tripped up by Wild defenseman Turner Ottenbreit, and as such gave Grand Rapids a huge chance going into the extra frame with 1:41 of power play time.

Despite the lengthy 4-on-3, Grand Rapids was kept to the outside by excellent Wild penalty killing that was able to get some key clears and didn’t give up any quality chances for the attackers. Once the penalty expired and the 4-on-4 play was over, the Griffins only needed one rush. Elson connected with Berggren, who fired a perfectly placed shot low blocker to take the extra point away from their division rival in this one with the final of 6-5.

Jonatan Berggren makes a play every time he touches the puck. In his young age, there’s still much to learn for him yet, but that just makes him more dangerous down the line, and it’s going to continue to be fun to watch this young kid grow up for Griffins fans. It’s a long season, and there are sure to be some growing pains, but he’s starting to become worth the price of admission alone with his smooth skating, nifty hands, and deceptively good defensive play. Namely, in this one, his hustle on the backcheck to lift the stick of an attacking Wild player and went the other way with it through another Wild player’s skates. I won’t make the direct comparison to former Red Wing magician Pavel Datsyuk just yet, but that play was very Datsyukian.

It was nice for the Griffins to give Calvin Pickard some help finally. The story earlier in the season was Pickard making a heavy amount of high-quality saves with little offensive support – he came into this game with an eye-popping 1.51 GAA, and a .955 save percentage but only a 2-2 record. Friday night wasn’t his best game, and he’ll be the first to tell you, but he’ll also be the first to say his teammates came out and got the win and that’s what matters.

The Griffins still need to learn how to play a full sixty minutes. It looked like their feet stopped moving after Verbeek made it 5-3 late in the third, but good teams require that complete effort to beat, and it was evident in those waning minutes of senseless turnovers and idle skates that Grand Rapids isn’t going to walk away with a win like that on most nights. The two points for them are huge but will that point that Iowa got away with matter in the standings at the end of the season?

It was not a good night for special teams for the Griffins; 1-for-5 on the power-play, including the major with a shorthanded goal against, while the PK only killed one of four chances. The team worked hard on 5-on-5 to overcome it tonight, but that’s a losing recipe 9 times out of 10.

The Griffins head up the road to take on the Rockford IceHogs tonight at 7 PM before returning home to host the following weekend against Manitoba.