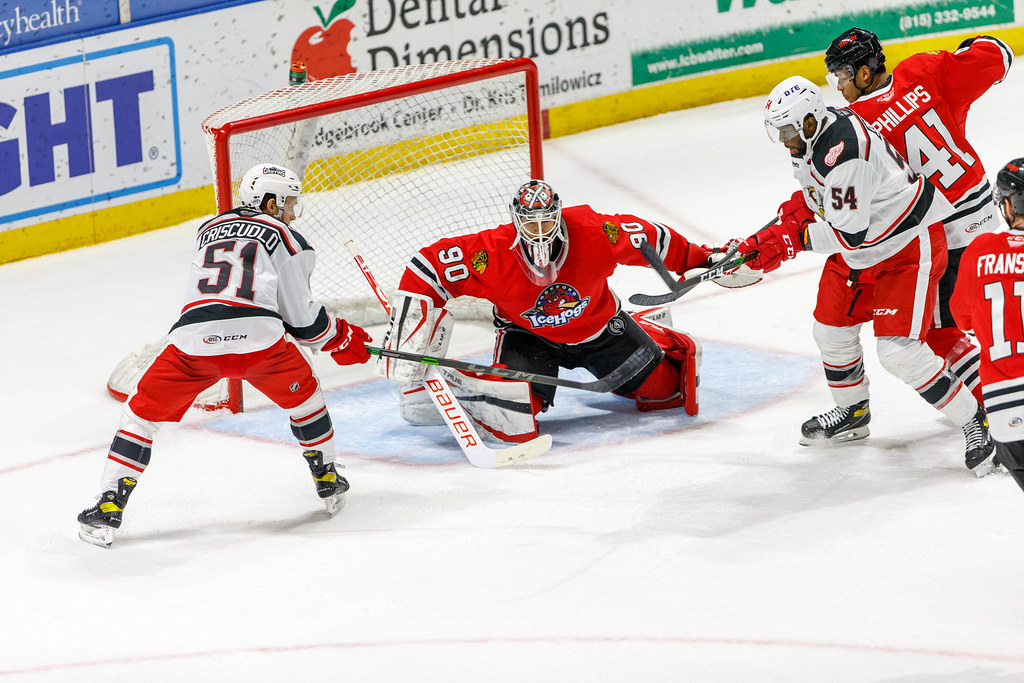 Rockford closes out a four-game homestand with two wins and two defeats. The Griffins were the more physical club in this Central Division battle. They also proved to be the more adept passing team by a wide margin.

After a scoreless first, the Griffins took advantage of a turnover in the Hogs zone by Dimitry Osipov early in the middle frame. Chase Pearson skated the puck into the high slot, dropping a pass to Riley Barber. Barber sent a high shot over Hogs goalie Matt Tomkins’s glove for a 1-0 Grand Rapids lead 2:04 into the second.

Tomkins was able to keep the IceHogs in the contest despite facing a slew of Griffins shots from close range through the first forty minutes of action. Rockford was outshot 22-11 in periods one and two; the Hogs had no shot on the Grand Rapids net as close as the faceoff dots in that time.

The dam broke in the third period. Grand Rapids put up a pair of goals in a three-minute span to take full control of the contest. The first came 6:04 into the third when Osipov blocked an attempt by Gustav Lindstrom that bounced to the left post. Kyle Criscuolo was on hand to knock the puck into the cage for a 2-0 Griffins lead.

Grand Rapids captain Brian Lashoff finished off a pretty bit of passing from Tyler Spezia a few minutes later. Lashoff sent his shot to Tomkins’s stick side at the 9:09 mark, making it 3-0 Griffins.

Rockford broke up Pat Nagle‘s shutout bid with a goal late in the game. Michael Krutil‘s long-distance offering caromed off the skate of D.J. Busdeker at 16:19 of the third, cutting the lead to 3-1. Despite pulling Tomkins (29 saves on 32 shots) for most of the final three minutes, the IceHogs could not close the gap.

Nagle, voted the game’s first star, had a relatively easy night in net for Grand Rapids. The veteran stopped 17 of the 18 shots the IceHogs could muster on goal. Each team had just one attempt with a man advantage; neither the Hogs nor Griffins converted.

Rockford and Grand Rapids now move to Van Andel Arena for their next two games. The IceHogs travel to Grand Rapids for games on Saturday and Tuesday.