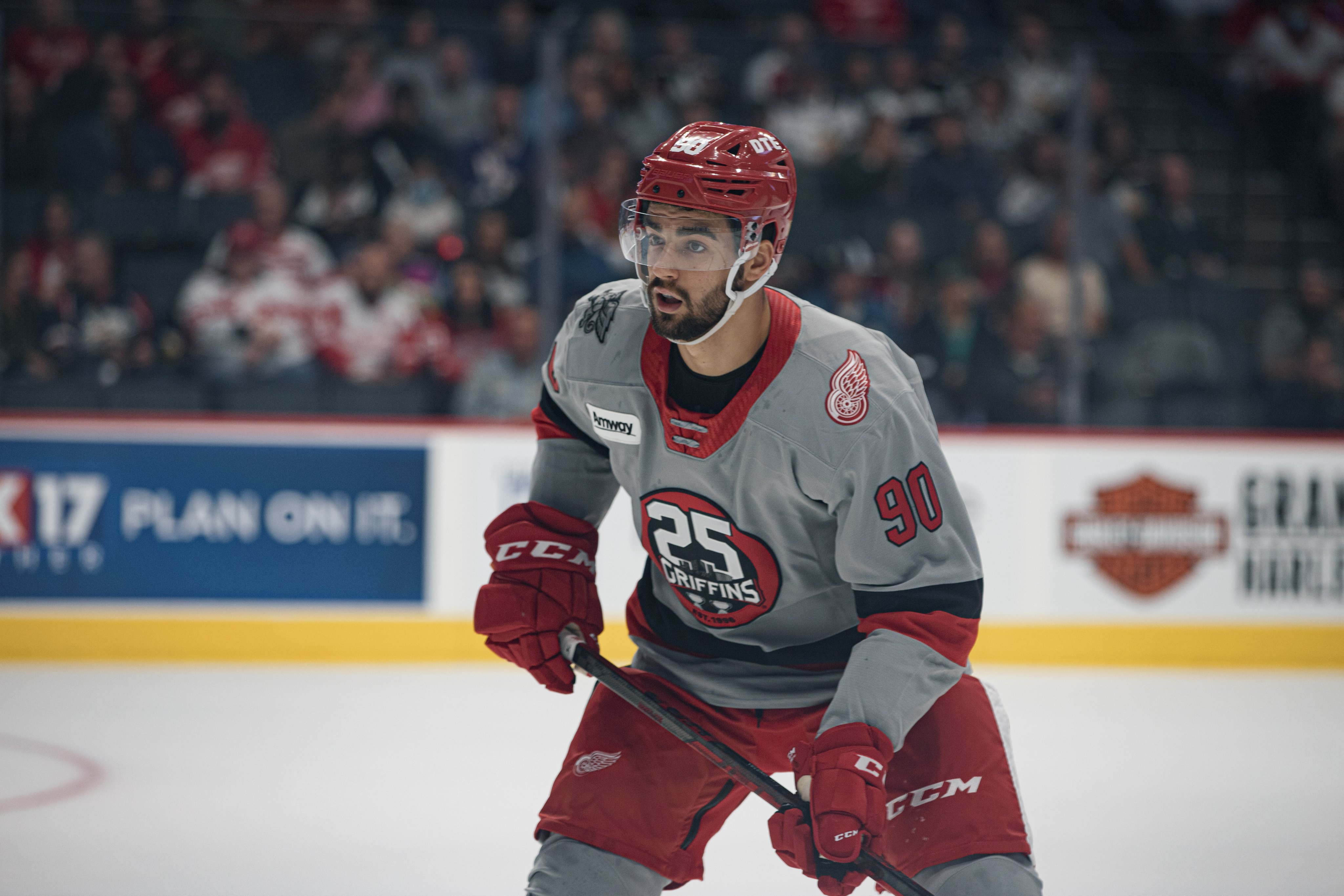 Take a pause and reflect on the numbers. That’s how long it’s been since the Grand Rapids Griffins had skated out to a crowd of over 10,000 cheering Griffins fans. Yet here they were, dressed in red and bursting with hope in a new season with fresh new faces and – hopefully – a full season of normalcy. Their presence couldn’t be understated from longtime defensive anchor and captain Brian Lashoff.

“It’s amazing. We got the best fans in the league. You can feel the atmosphere even in the warmups. They’re a huge momentum swing for us, and we were really happy to give them a win for the first game of the year.”

Before they could get ahead of themselves, the Griffins had to get ahead of the Rockford IceHogs. Grand Rapids split their season series with the IceHogs last season, going 4-1-3 against their divisional rivals.

The Griffins would be reinforced with some of Detroit’s final preseason cuts, including top prospect Joe Veleno, who was expected by many in and outside the Red Wings organization to be on the opening night roster. Instead, Detroit GM Steve Yzerman opted to have Veleno playing top minutes in all situations in Grand Rapids to start the season.

“I think it’s more on me that I wasn’t that much of a stand out.” Joe said of his assignment after preseason camps. “I just got to build off that and show that I can dominate this league and be back up there in no time. I got a big role here to play in all situations and this team will rely on me. I have big expectations for myself.”

Before puck drop, the Griffins held a ceremony to honor  Lashoff for 500 career games spent in Grand Rapids. Lashoff signed with the Red Wings in 2008-09 and has only played in their organization since finishing his junior career. Lashoff has been the longtime captain for the Griffins and received the highest praise from head coach Ben Simon.

“I can’t say enough about Brian. [He] epitomizes what it means to be a Grand Rapids Griffin and a Detroit Red Wing. He’s a guy who has brought it every single day since he’s walked through those doors as an 18 year old. You don’t play so long in the same organization just by chance.”

Following the ceremony and the national anthem, all 10,843 Griffins fans in attendance were bursting with anticipation, and with the opening puck drop, the 2021-2022 season was underway.

One of the biggest storylines from Grand Rapids’ offseason was the injection of youthful, skilled forwards, including Jonatan Berggren. From the opening shift, Berggren’s shiftiness and playmaking were on display, and the IceHogs found it difficult to contain the elusive winger. Early on, both teams struggled to gain a flow to their games. Icings and offsides were the story in the first half of the period, which could be attributed to a lack of real preseason for these two teams. A penalty given to Dennis Yan just a couple of minutes into his shift was killed off without any real chances for Rockford, and a Griffins PK that executed at a clip second to worst in the AHL last season was already appearing much improved over 2021’s counterpart.

The script would flip and give the Griffins a power play opportunity of their own. It took just 30 seconds into the man advantage when new acquisition Ryan Murphy streaked down the left-wing boards and left a pass for Veleno, who walked into the high slot and fired a wrister past IceHogs goalie Malcolm Subban for the 1-0 lead.

Joe Veleno really wants to get back to the NHL #LGRW pic.twitter.com/Yw07sZJI6U

Just over a couple of minutes later and Rockford was on the counter. A point shot from Nicolas Beaudin pinballed out front, and Josiah Slavin was in front of the net to put the loose change away and get Rockford on the board. The IceHogs nearly get out in front at the buzzer, but Calvin Pickard’s toe save keeps the game tied at one goal apiece heading into the first intermission.

The first couple of minutes spelled immediate pressure for the IceHogs, with a flurry of chances that Pickard was forced to fight off with Grand Rapids unable to get any clean zone exits. Despite the sustained possession in the Griffins’ zone, a turnover at the Rockford line provided the chance. Tyler Spezia tipped home a pass from Kirill Tyutyayev to restore the Griffins lead just over three minutes into the period.

Just over a minute later and Berggren was out there dazzling again. Streaking down the right-hand side, he tucked the puck through his legs to gain space on the outside and past a defender. Drawing around the net, Berggren dished the puck to the front of the net, where Turner Elson finished up past Subban for a 3-1 Griffins lead.

This move from Jonatan Berggren to set up Turner Elson ? #LGRW pic.twitter.com/RonvqOl2qt

Rockford, however, wouldn’t go quietly. The IceHogs continued to push the pace into the Griffins’ zone following a minor penalty to Lashoff. Still, no matter the possession numbers in the attacking zone, the Hogs couldn’t generate any large quantities of dangerous scoring chances being kept mainly to the outside by Griffins defenders. Pickard swallowed up any chances that did come in.

Once again, despite lengthy Rockford possession, Grand Rapids turned around with the high-grade chances on the rush. Tyutyayev, again attacking the right side, made a stutter-step move to beat the IceHogs defender and sent a backhand pass across the crease, where Hayden Verbeek was there for the tap in goal to make it 4-1 in favor of Grand Rapids. All three goals in this period were scored in transition following lengthy IceHog offensive zone pressure. The Griffins nearly added another, where a shot beat Pickard but hit the post and led to an outlet breakaway pass for Berggren, who was stuffed by Subban.

The over ten thousand faithful in Van Andel wanted more, but the buzzer sounded, leaving only the last twenty minutes to go. Rockford may have wished that was it.

Unlike the second, where they started on their heels, Grand Rapids came out with the intent to drive the play into Rockford’s zone. Instead of playing back to protect the lead, the Griffins continued the attack. Just over four minutes in, and they were back to the man advantage – again, they only needed a few seconds to convert. Taro Hirose from the point set up Chase Pearson, who was left all alone out front and shoveled a backhand past Subban, and the rout was on with a 5-1 score.

It just wasn’t the night for the IceHogs. Despite their possession, Rockford couldn’t buy a goal. Even with a look on their power play, when it appeared that they finally got one past Pickard to turn their luck around, the referees waved the goal off for a kicking motion. The Griffins penalty kill finished a perfect 3-for-3 after an abysmal 2021 season.

Tyutyayev continued an active game into the third period, where he and Veleno connected for a quality chance made from speed that Subban had to fight off to save. He was again dangerous behind the net, nearly setting up Luke Witkowski for yet another goal on the doorstep that Subban got a piece of.

The Griffins weren’t done yet as Yan came attacking down the right-hand side on a two-on-one and fired a rocket over the glove hand of Subban to make the score 6-1 with seven minutes to go. That would hold up as the final on this one as Grand Rapids walked the game home the rest of the way.

Dennis Yan with a nice wrister, and the Griffins extend the lead to 6-1. #GoGRG pic.twitter.com/yFkpyg7fbS

The Griffins get right on the bus and travel to Milwaukee, where the Admirals will host them on Saturday at 7 pm EST. The game can be watched on AHLTV during their free preview this weekend.