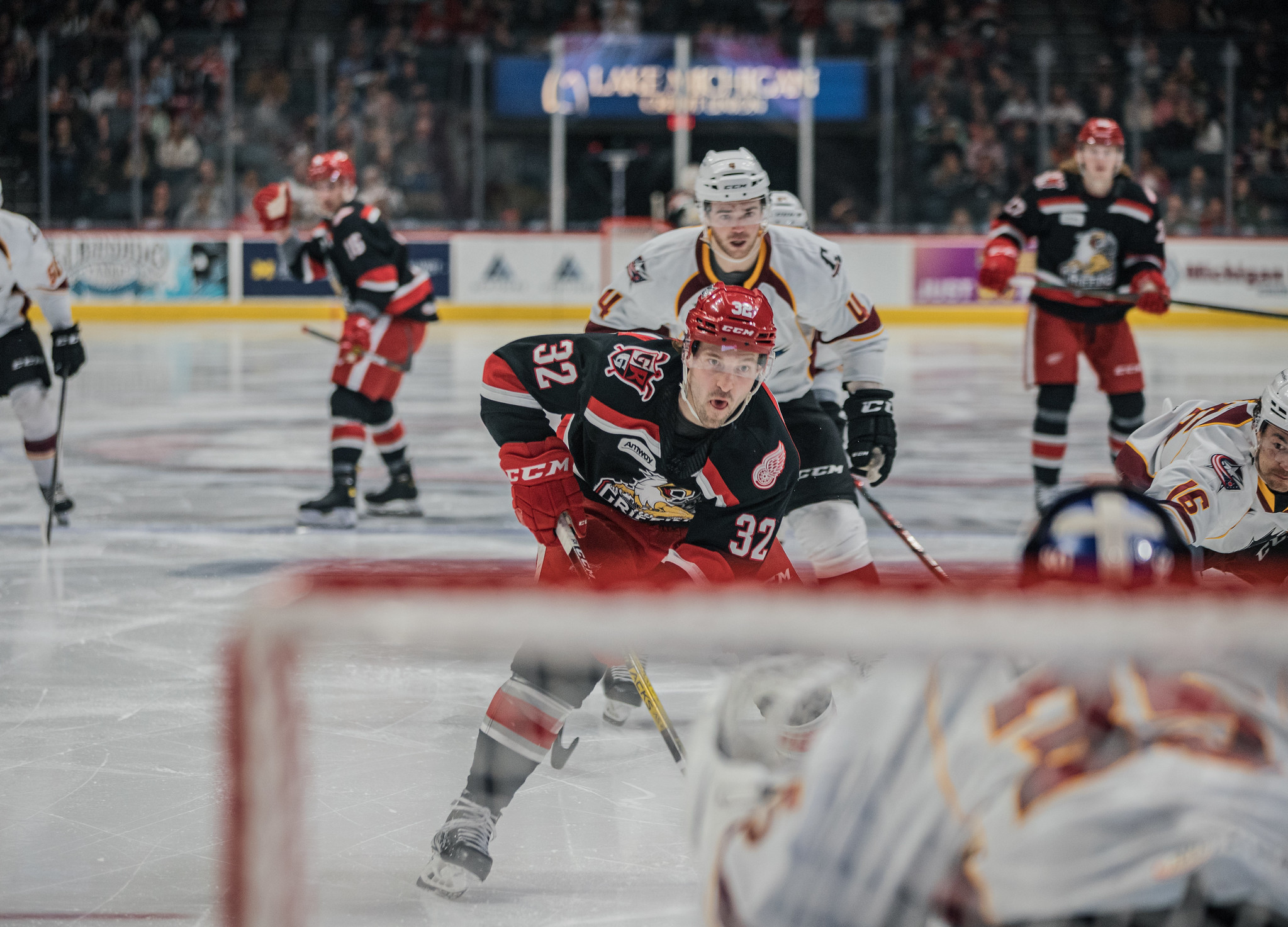 GRAND RAPIDS, Mich. – The Grand Rapids Griffins played host on Friday to one of the few teams this season that they can completely claim the advantage of in the Cleveland Monsters. Sporting a 3-0-1 record against the Monsters already this season to build on a 7-3 record from the abbreviated 2021 campaign, it seemed like the perfect opportunity for the Griffins to try and create some distance in the Central Division playoff race.

However, the Griffins’ lineup has been consistently shuffling with names all season, and Friday night was no different. Already missing center Kyle Criscuolo due to injury, the Griffins learned early on Friday that Detroit recalled veteran leader and leading scorer Taro Hirose. Given the timely report of a season-ending injury to winger Robby Fabbri, the Griffins can reasonably expect to be without Hirose until the season’s end – a huge loss for a Griffins team sporting the second-fewest goals for in the Central.

With the opening puck drop, the Griffins would have to step up collectively as a team in the absence of some of their big scorers.

Just five minutes in, and the mental lapses were already beginning for Cleveland as they were hit for a too many men on the ice minor. The Griffins, with a powerplay unit ranked 29th out of 31 AHL teams, made them pay with a Turner Elson redirection out front for his 15th goal of the season to lead the team. Cleveland’s penalty woes would continue as Brett Gallant jumped Dennis Yan after being dumped by Yan at center ice. The instigating minor opened up the door for Riley Barber to score his tenth of the season on the man advantage.

As the penalties continued to pile up in the opening frame, Tyler Spezia took a pass along the far side boards and streaked in on net to put a shot on the far side of Monsters netminder Jean-Francois Berube. The funny angle perhaps caught Berube off guard, but they all count the same, and the Griffins saw themselves up 3-0 by the time the first period ended.

This goal was just one more in a career year for Spezia.

“To be honest, it’s just playing hard.” Spezia said of his success this season. “I think if you have a foundation of playing hard, it’s how you earn the coach’s trust. This is the first year I haven’t been bouncing around and I’ve been able to get comfortable here. Just be ready for whatever, just keep playing hard, and the rest will take care of itself.”

Unfortunately for the Monsters, the onslaught continued from the home team on the first shift. Defender Butrus Ghafari, making his Griffin debut after signing a PTO on Friday morning, buried Tyler Sikura at the blue line in the opening minute. The puck was left for Barber to hit Spezia up the neutral zone, where his speed allowed him to break away from Cleveland defenders in alone on Berube. Spezia slid the puck through the five-hole and made it 4-0 Griffins just 47 seconds into the period. The tone was set, and the flood gates were opened.

Ghafari with the hit💥

🏎Spezia with his 2nd of the night 🚨 pic.twitter.com/NwajlccHK8

Ghafari, growing up locally and with family in the arena, couldn’t be more excited for his opportunity.

“I found out this morning at 7:30” Ghafari said of his callup. “Instantly jumped in my car, packed up and called the family. The whole family was here, it was an exciting day for me. I came and watched these games when I was younger, like when [Darren] McCarty got sent down, so it was kind of cool to be out there playing on the same ice that they did.”

After surviving one of their own penalty kills, the Griffins were on the attack late in the period once more. Jon Martin, draped with a defender all over him, was able to drop a no-look backhand pass to Brett McKenzie streaking down in the slow, and he cleanly beat Berube on the blocker side to make it a 5-0 lead for the home team. Van Andel Arena was rocking, and the home team was buzzing, but the action had yet to play out.

With frustration building for the Monsters, Bill Sweezey decided to take some out on Spezia and found himself sitting two minutes for roughing. He wouldn’t see those full two minutes, as Ryan Murphy launched a rocket from the point that beat Berube and pushed the lead to 6-0 with the Griffins’ third power-play goal of the evening.

Mercifully for Cleveland, the period would end with that score.

The score being what it is, the Griffins decided to lock the Monsters down in the third period rather than to try and run them out of the building. Grand Rapids clogged up the neutral zone and positioned themselves well in the zone to get pucks on their stick and away from netminder Calvin Pickard, who didn’t have much in the way of dangerous chances coming his way all night.

With captain Brian Lashoff sitting for hooking, however, the Monsters got a chance to flex their own power play muscle and broke Pickard’s shutout bid with just five minutes left. Kevin Stenlund added his 7th of the season, but it was far too little, far too late as the clock ran out with a 6-1 final in favor of the home team.

Pickard finished with 27 saves, while Berube stopped 21 of 27.

“We were talking about Jared’s development this year before the game, he’s quietly put together a pretty solid season.” Coach Simon said after the game. “He’s earned the opportunity and he’s learned a lot from Ryan Murphy. Throughout the course of the season, our numbers aren’t indicative of our power play success. When we look at the analytics we’re generating a ton of chances. Tonight was one of those nights where maybe we were rewarded for chances that probably shouldn’t have gone in. Hockey has a funny way of working out.”

The Griffins finish off their weekend with a travel day on Saturday before another big game on the schedule with a date against the Chicago Wolves on Sunday afternoon. The Griffins have yet to beat the Wolves in eight meetings this season.