Griffins Rally Past Wild to Stay in Hunt 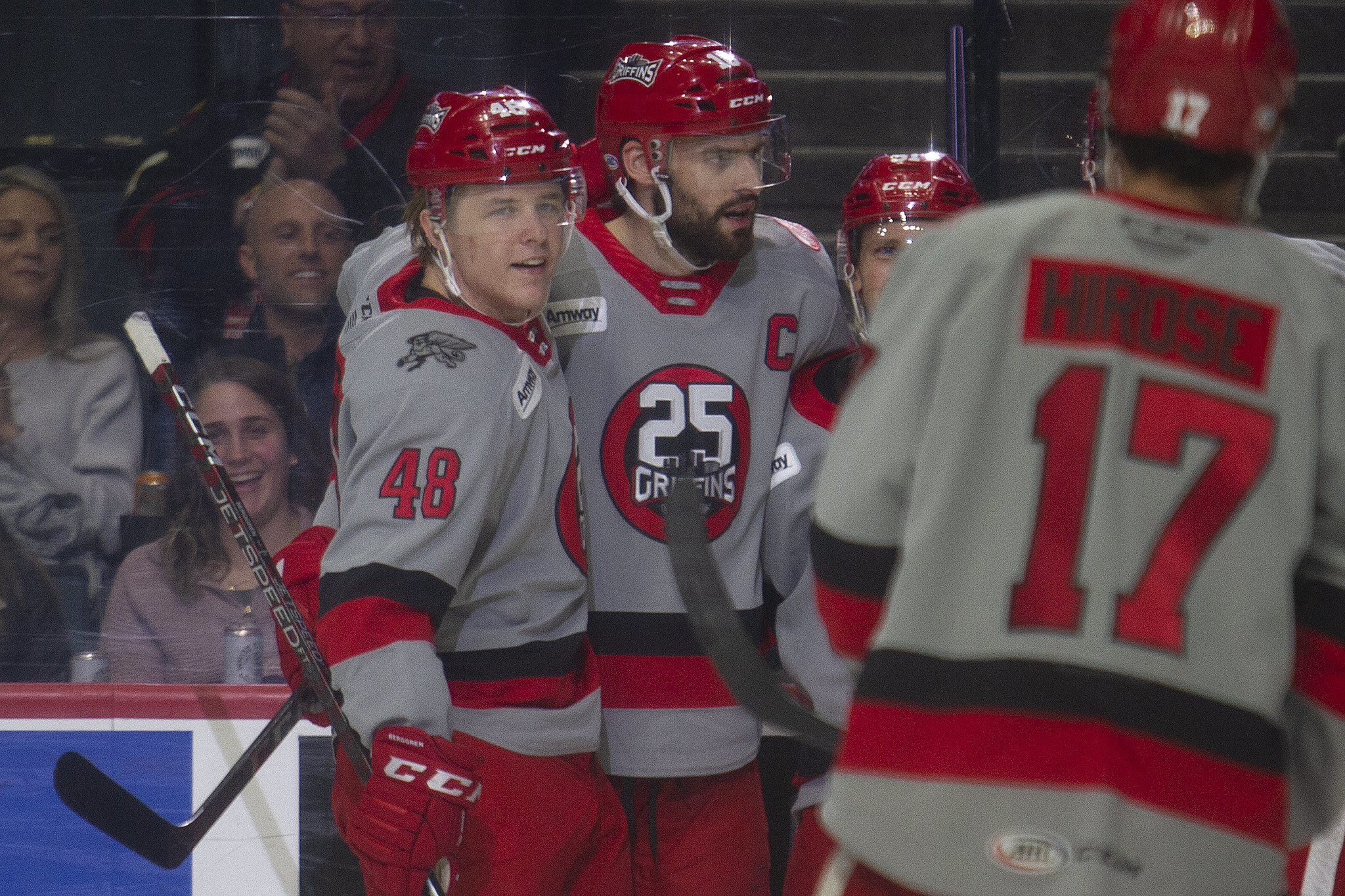 GRAND RAPIDS, Mich. – Going into Friday’s game, the Griffins found themselves sitting at dead last in the Central Division.

With a .493 point percentage – the determining factor on a team’s postseason fate – they found themselves looking up in the standings at the Texas Stars and Iowa Wild for the last playoff spot in the division: both at a .515 percentage. With just seven games left in the season, time was running out for the Griffins to claw their way back up the standings to get themselves back into the picture, and hosting the Wild on Friday couldn’t have bigger implications for their season.

With the Wild coming in on a five-game point streak, the confidence of the visitors was high, but they were skating into a raucous Van Andel Arena that prepared a playoff-like atmosphere for this Central Division showdown that resulted in a 3-1 win for the Griffins.

The opening half of the first period saw the Griffins holding sustained pressure in the Iowa zone – something that they’ve routinely failed to consistently achieve in the last couple of weeks. Despite their good looks offensively, Iowa goaltender Zane McIntyre was able to stymie the early chances by the home team and open the door for the Wild to take the lead. They did so when Mason Shaw slid in from a faceoff scrum in the offensive zone and tucked the puck through the five-hole of Victor Brattstrom. It was the tenth game in the row that the Griffins gave up the opening goal.

The Griffins, however, battled back as they had done so often when falling behind early. Jonatan Berggren took the puck on an odd-man rush and fed it through the slot to Kyle Criscuolo streaking down the slot, who got a stick on it to deflect it past McIntyre to tie the game up at one just three minutes after Shaw’s marker.

5️⃣1️⃣ ties it up at 1️⃣ #GoGRG pic.twitter.com/ssWdpEGOfv

“It’s a funny game sometimes.” Criscuolo said. “You have some highs and lows. Just trying to help the team win any way I can, that’s always been my mentality. It’s nice that they’re going in”

“He does everything right.” Griffins head coach Ben Simon said of Criscuolo. “He does a lot of little things very well. When you’re playing a lot of minutes and afforded a lot of opportunity and not producing it’s tough. We’ve been trying to find ways to make him more effective. Was it playing him on the wing? Are we playing him too much, or too less? He works and competes extremely hard, so to see him finally break through a little bit here and be rewarded with a goal – it’s just great to hopefully have him use that as a springboard for the push that we’re going to need him for.”

Whereas the first period opened up for chances from both teams, the second was characterized by hard-nosed grinding and defensive play. Iowa set the tone early in the period when captain Cody McLeod laid a heavy hit on Wyatt Newpower in the open ice. Just a few seconds later, the puck came back to Newpower in the same area of the ice and McLeod laid another heavy hit – this time he was called for boarding – and Newpower and the Griffins took exception, leading to all ten skaters coming together for a scrum. The playoff atmosphere was now there for both sides.

Though chances were few and far in between in that middle frame, there was one spectacular save from Brattstrom that kept the game tied at one heading into the third, leading to the most important period of the season for both teams.

Early on, both teams seemed to be locked in that defense-first mindset, not wanting to make that mistake that allows the other to take advantage in such a crucial game for each side. However, seven minutes in Iowa found themselves doing just that as Taro Hirose got behind the defense on an odd-man rush with Berggren, who took the feed from Hirose and roofed a shot past a sprawling McIntyre to take the 2-1 lead for the Griffins.

You love to see it🤩 pic.twitter.com/TSu2h1mF00

Despite holding a one-goal lead, the Griffins refused to sit back and fall into a defensive shell. Like the first period, they applied consistent pressure in Iowa’s zone, grinding and working for their chances until Josh Dickinson wrapped a puck around from behind the net that tucked in past McIntyre’s skate for a crucial insurance goal. With four minutes to go in the period, Grand Rapids could collapse their defense in front of Brattstrom, who stood tall at the end in the face of a flurry of Iowa chances.

Eventually, the time ran out on the Wild and the Griffins took this one by the final of 3-1. Brattstrom stopped 30 saves for his 9th win of the season that started rocky for him but has completely turned around for him in these last few months.

“Again, I keep going back to confidence. For Victor, I think he’s shown pretty good mental fortitude and belief in himself,” Simon said. “Maybe he wants a few periods or a few games back, but overall I think he’s responded well. He’s accountable to himself and I think he’s got a good self-evaluation of his game, what he wants and what he wants to accomplish. I think that’s one of his biggest attributes.”

“All season long it’s been tight games for us.” Criscuolo said after the game. “We rely heavily on our defense and our goaltending and I think that’s going to be the recipe for success coming down the stretch. We just need to bear down and understand that every game is must-win for us at this point. Hopefully we can get hot at the right time and anything can happen in playoffs.”

The Griffins travel to Des Moines for another crucial game against the Wild on Tuesday, April 19. They travel to Rockford on Wednesday before returning home on Friday to host the Chicago Wolves.