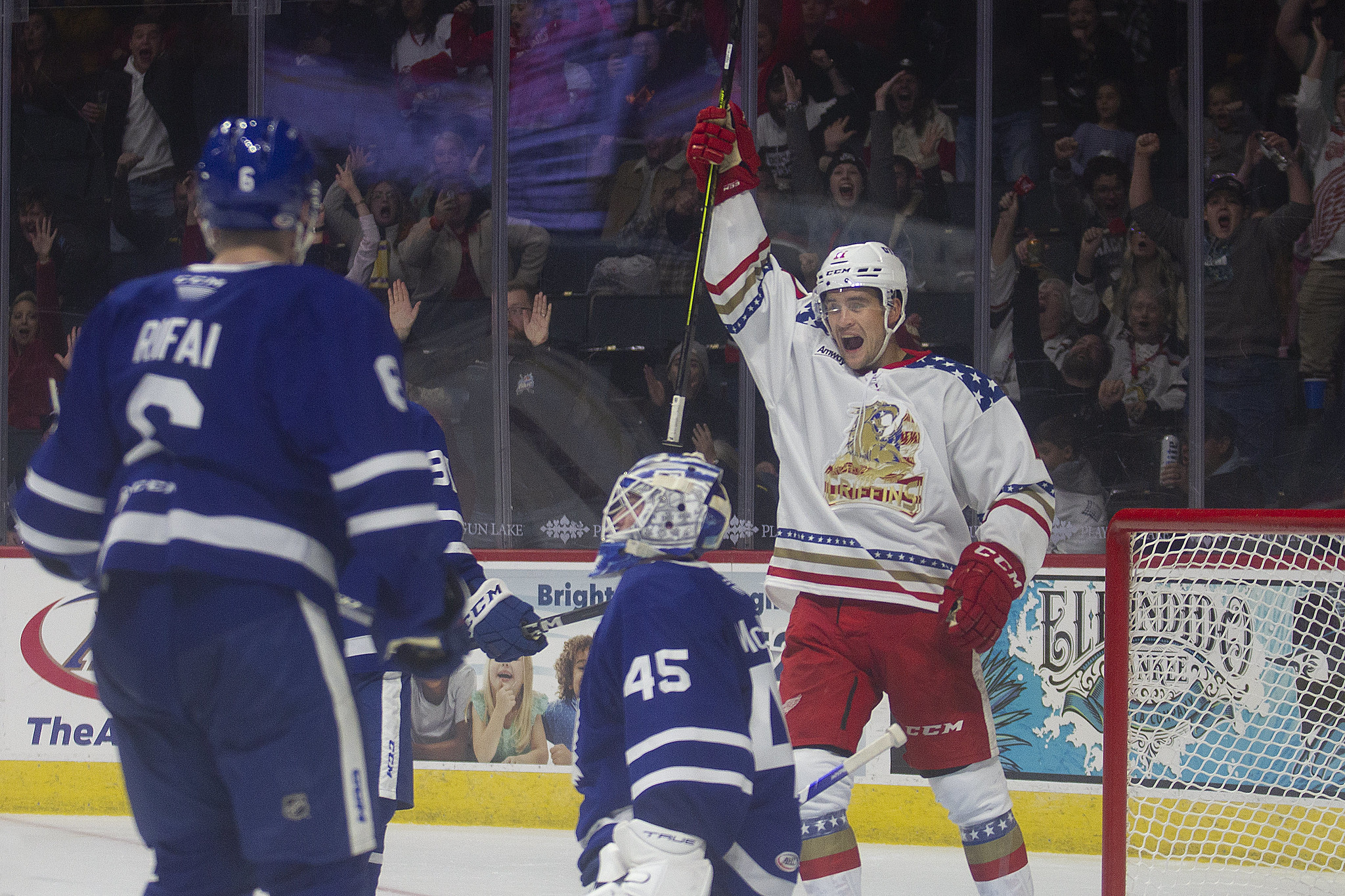 Griffins Roar Back For Dramatic OT Win Over Marlies

Griffins Roar Back For Dramatic OT Win Over Marlies

GRAND RAPIDS, Mich. – After a month of being on the road, the Grand Rapids Griffins were finally coming home. Enduring an eight-game stint on the road that saw them only coming away with three wins, coming back to the hometown fans at Van Andel Arena surely would rejuvenate this team.

“It’s just good to get back.” Head Coach Ben Simon said. “We talked about taking advantage of it, and having the support of the crowd was huge in the third.”

“Obviously when we started the comeback there, you could feel the energy in the building. I’ve been here for a couple of years and know how important these fans can be to us and tonight was no exception.”

The hometown noise eventually propelled the team to score three straight goals in the third period and cap off an incredible comeback win in overtime by the final of 5-4.

On the game’s opening shift, Givani Smith tried getting the crowd and his team in the game with a couple of big hits – a trend that the Griffins got after early and often on the forecheck.

“They’re a skilled team.” Simon acknowledged. “Our plan was to be physical, take away time and space, stay above and frustrate them. I wasn’t too frustrated with our first period. At the end of the day – not to call goalies out – we need a save at certain times. They know that.”

The physical play didn’t deter the Marlies, who went to work just six minutes in as Semyon Der-Arguchintsev sped in and snapped a shot past Jussi Olkinuora to put the visitors up 1-0 early.

Toronto came into this one with the AHL’s #1 ranked power play, and it would flex its muscle early in this game. Pontus Holmberg cleaned up a rebound at 13:15, and with another opportunity with less than a minute to go Der-Arguchintsev struck again to put the visitors up 3-0 heading into the first intermission. For a Grand Rapids team missing three top forwards in Matt Luff, Austin Czarnik, and Jonatan Berggren due to call ups, they had their work cut out for them.

The physical play from the first period continued into the second. After Noel Hoefenmayer dropped Criscuolo into the Marlies’ net just two minutes in, the Griffins’ center got up with gloves dropped.

“I felt like two or three times that shift [Hoefenmayer] got me, and if the refs aren’t going to do anything I have to stick up for myself.” Criscuolo said of the altercation. “Feel like as a team, we can do a little more of that and make sure that we are sticking together and sticking up for each other. I was just trying to make sure that guy didn’t think that they had us on the ropes there.”

The Griffins kept putting their chances on rookie goaltender Dryden McKay but found difficulty breaking through. It took over fourteen minutes of game action in the second for the Griffins to get on the board. Tyler Spezia fed a beautiful pass in to a streaking Joel L’Esperance, who beat rookie McKay to get the home team on the board. Albert Johansson collected the secondary assist – his first point as a Griffin.

Toronto responded immediately – just over a minute later a breakdown at the blue line led to a 3-on-1 for the Marlies, and William Villenueve converted on a patient opportunity to take away the momentum the Griffins had built up in this one.

The Griffins pushed for one more before the end of the period but McKay stood tall, and skating into the second intermission down 4-1 the clock was beginning to run out on Grand Rapids to make a statement.

Coming out to start the third, Grand Rapids wasted no time in putting pressure on the Marlies in an effort to claw their way back into this one. It took all of 90 seconds for Cross Hanas to intercept a pass in the Toronto corner and feed a one timer out to Pontus Andreasson that beat McKay to make it a 4-2 game just like that. The marker was Andreasson’s elusive first of the season.

Back to back penalties to Donovan Sebrango and Taro Hirose looked to spell doom for the home team, but the penalty killers came up huge in front of Olkinuora. Following the kills, the Griffins turned the play back around into the Marlies’ end and their effort paid off ten minutes into the period. Jared McIsaac followed up a loose puck with a quick, low shot past McKay to get the Griffins within one at 4-3.

Van Andel suddenly burst alive with energy – the hometown fans made themselves heard with chants both in celebration for their side and jeering their opponents. Just a minute later an Adam Gaudette high stick put the Griffins back on the power play with the home team riding a wave of momentum that came crashing down abruptly on the Marlies. Hanas and Andreasson connected again with a tipped shot in front of McKay for Andreasson’s second of the night. The equalizer prompted a roar from the Van Andel crowd as the Griffins gathered in jubilation for a result perhaps only they believed in.

Back and forth action followed the last minutes of the third, but neither side could capitalize and incredibly this game was heading to extra time.

After trading chances at one another, it was the usual suspects for the Griffins in this one. Andreasson forced pressure at the blue line, getting the puck to Hanas for a streaking chance in all alone. Lifting a short side shot past McKay, Hanas streaked down the boards as the overtime hero, mobbed by his teammates beneath a roaring crowd of fans that remained after the 4-1 score looked bleak.

“We’re missing some big pieces.” Simon said. “We’re excited for those guys when they go up – we’re their biggest cheerleaders when they’re up there. When that happens, its opportunity for other guys. Pontus Andreasson stepped up. Givani Smith played heavy and physical. Cross [Hanas] was very good tonight. Between the three of them, they played well and our young defensemen stepped up and played hard.”

These two teams rematch on Saturday night back at Van Andel Arena at 7 P.M. EST to wrap up the weekend series.