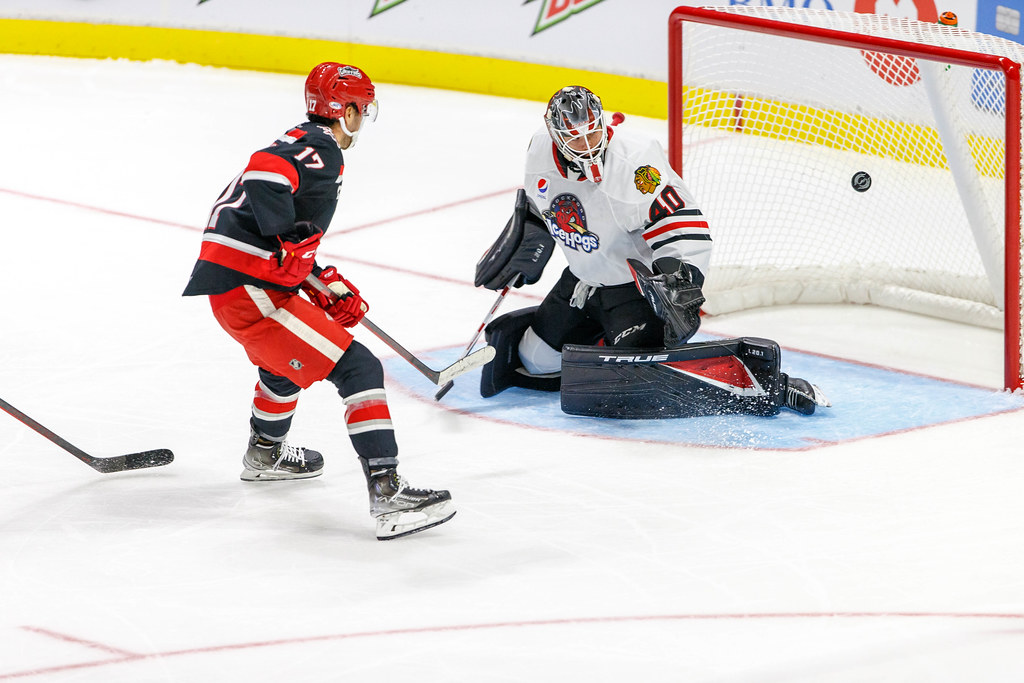 ROCKFORD, Ill. – The Rockford IceHogs were looking to open the home portion of their 2021-22 schedule with a victory on Saturday night. The visiting Grand Rapids Griffins managed to spoil those plans in the span of ten seconds.

That was the interval between two goals that proved to be enough for the Griffins (4-4) to derail Rockford’s home opener at the BMO Harris Bank Center. Grand Rapids won its second straight game of the weekend with a 2-1 decision.

The Hogs, who fell to 2-5 on the season, were the aggressors early. However, a pair of quick strikes by Grand Rapids was all the offense it would need on this evening.

Midway through the opening period, as an IceHogs power play wound down, Tyler Spezia and Dominik Shine came down the ice on an odd-man rush. Spezia got a one-timer past Rockford goalie Arvid Soderblom at 9:07 of the first period for the shorthanded goal.

Just seconds after the subsequent faceoff, Taro Hirose redirected a pass from Jonatan Berggren at the 9:17 mark to put the Griffins up two goals.

Grand Rapids controlled much of the action in the middle frame, out-shooting the IceHogs 14-5. However, it was Rockford that was able to close the gap on the scoreboard.

The goal came on a power play, set up by a Wyatt Newpower tripping infraction late in the second period. The IceHogs had just been denied entry into the Griffins zone when Ian Mitchell chased down the clearing pass. Rockford gave it another go, with Alexander Nylander threading a pass across the ice for Evan Barratt at the top of the left circle. His feed to Brett Connolly was spot on, and the veteran forward guided the puck past Grand Rapids goalie Calvin Pickard 19:19 into the second.

Down 2-1, the IceHogs pinned their ears back and pushed hard for the equalizer in the third period. Pickard was up to the task, sending away all ten shots Rockford got to the net. Interim coach Anders Sorensen pulled Soderblom in the final minutes, but the Griffins came up with several key blocked shots to prevent the Hogs from tying the contest.

With a goal and a big blocked shot in the final seconds, Hirose was named the game’s first star. The second and third stars were Connolly and Spezia, respectively.