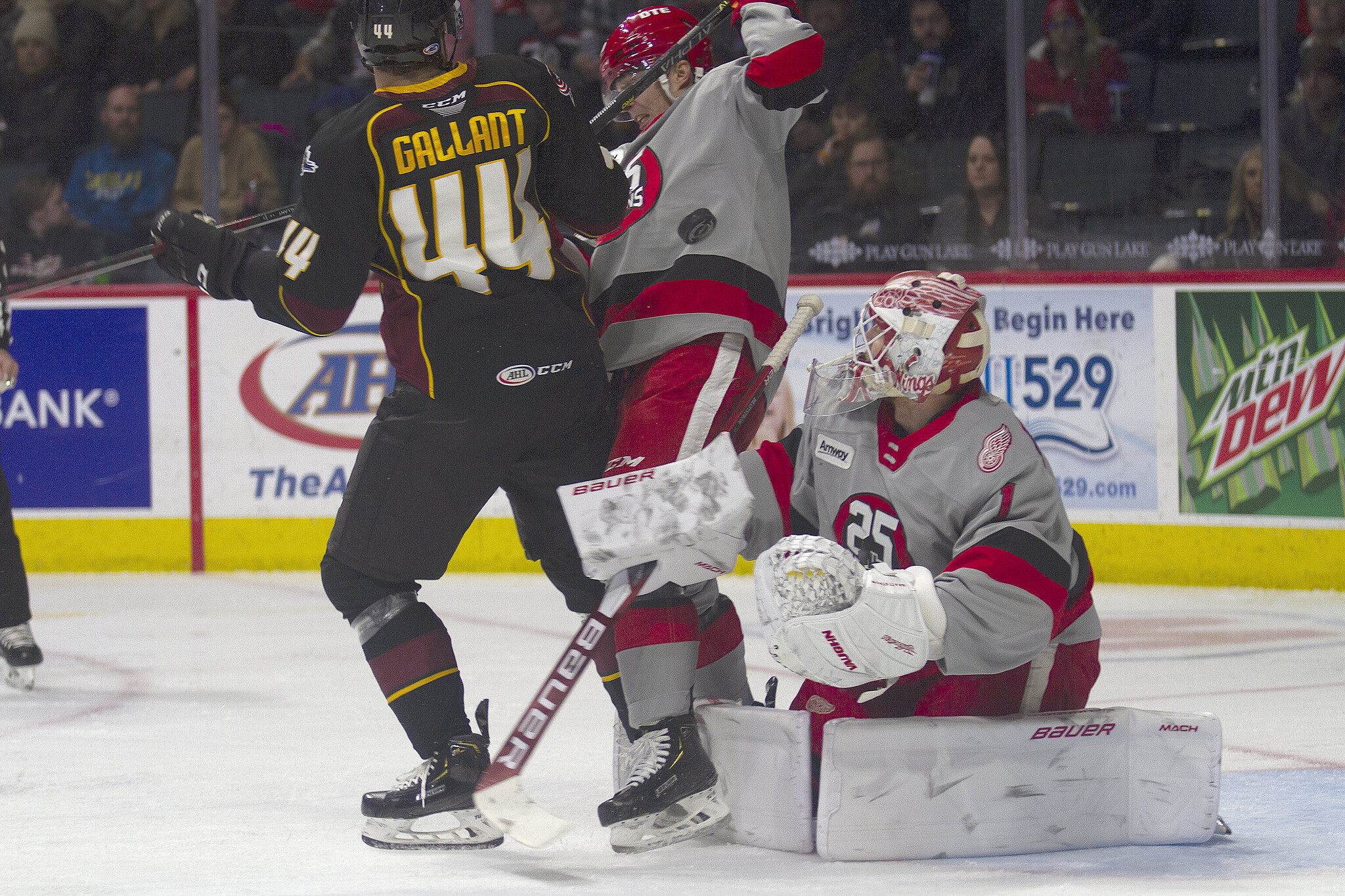 GRAND RAPIDS, Mich. – Between postponements and call-ups for taxi squad assignments with their parent clubs, very few AHL clubs would be welcoming the challenges that these circumstances would present.

The Grand Rapids Griffins, however, are one of the clubs currently thriving through that adversity. Since Christmas, they’ve been riding a streak that saw them earn points in six consecutive games (4-0-2). That run has seen them break away from a middling .500 record in the center of the division standings to third place in the Central and a unique opportunity this week to establish their presence.

This week also, however, provides a challenge that the Griffins have seen before, and one that they’ve struggled incredibly with this season. After heading to Chicago on Wednesday to take on the division-leading Wolves, up next will be a weekend series at home against the second-place Manitoba Moose. Early on in this season, the Griffins saw these two teams a combined ten games and skated away with a 1-8-1 record against the top two teams in the Central.

Against the rest of their schedule? The Griffins stand at 12-2-2.

What’s been working well for Grand Rapids during this stretch, and what can they do to turn the tide against their division rivals and really throw a wrench in the Central Division race?

Over the last six games, the Griffins have really cranked their compete up in every zone. For head coach Ben Simon, it’s the key to their success every time his squad steps out onto the ice.

This has been clearly evident as the Griffins have been much more impressive in battling for loose pucks along the boards and keeping pucks to low danger areas in the defensive zone. Griffins winger Dominik Shine, returning from injury on Saturday against the Cleveland Monsters, echoed this after the game.

“We try to keep pucks out of the middle and having those wingers stay in the slot to prevent those easy shots.” Shine said.

Coach Simon stressed the importance of having a player like Shine back, and after Saturday’s game spoke about how his example on the ice helped set the tone for the rest of the team.

“I would climb into a foxhole with Dominik Shine any day of the week.” Simon emphasized. “He’s a character guy who epitomizes how we want to play. He wears his heart on his sleeve and he competes extremely hard.”

The effort from the guys up front has been excellent, but the Griffins are starting to find more confidence in their net, and this as a result is allowing the skaters to skate more confidently in front. Calvin Pickard is continuing his role as an absolute workhorse, but after early-season struggles young netminder Victor Brattstrom is starting to find his form following his best game of the season on Saturday.

“I just try to go out there and have fun.” Brattstrom said about his game. “It’s only going to get better from here.”

The idea of having fun while playing is a common theme from Coach Simon that’s resounded with his locker room all season, spoken from players like Taro Hirose, who leads the Griffins with 25 points, and Jonatan Berggren, whose game continues to mature with each contest. After a stint with Toledo in the ECHL, Brattstrom is looking to work with Pickard more this season as both goaltenders push each other to succeed.

“He’s competitive, we both are.” Brattstrom said of his mate in net. “It will be fun to compete everyday for games. I want to take his spot, and he knows that.”

With a capable goaltending tandem beginning to emerge and a team that refuses to yield, it seems like the perfect recipe for success, but of course, it’s always more capable than that.

It’s one thing to succeed against the Milwaukees and the Iowas of the league, but when the postseason comes around the Griffins will have to find ways to beat the big teams in the Central, which they’ve yet to do with any sort of regularity as of yet. One glaring issue that Coach Simon addressed is the team’s special teams: the Griffins are ranked in the bottom five in the AHL in both their power play and penalty killing.

“Our numbers haven’t been indicative of the chances we’ve got. We’ve had really good looks but haven’t been opportunistic enough to score some goals.” Simon said of his team’s PP unit. “It’s up to [our players] to execute and its up to them to compete. It’s a glaring deficiency in our team’s game right now. We have the capability and the talent to take ourselves out of this rut.”

Against the Moose, who rank 3rd in the AHL in penalty killing, this weakness has to be corrected to give the Griffins any sort of fighting chance.

The Griffins have also had the bad habit of being outshot by healthy margins. Reliable goaltending from Pickard coupled with hard-nosed defending keeping those shots out of high danger areas has allowed this team to continue to collect points. The Moose, however, are well known for their high volume of shots and their ability to create those shots from anywhere on the ice. The Griffins have shown their ability to limit the danger and clear the net, but the Moose like to throw heavy bodies in the face of opposing goaltenders and create chaos for the defenders.

It’s not going to be an easy week for the Griffins, but they knew that coming in.

“We just have to be ready to play from the get go.” Coach Simon said of the coming week. “Both of those teams have a lot of talent and a lot of depth.”

“[Our] guys have been playing great.” Shine confidently said on Saturday. “We got to find a way to play hard against them and give it our best.”

This is the same Griffins team that’s been snake-bitten against their divisional rivals, but one that’s coming in with confidence and with the mentality to outwork their opponent from whistle to whistle.

This will be a statement week for the Griffins with four of a possible six points taken from the top teams in the Central.