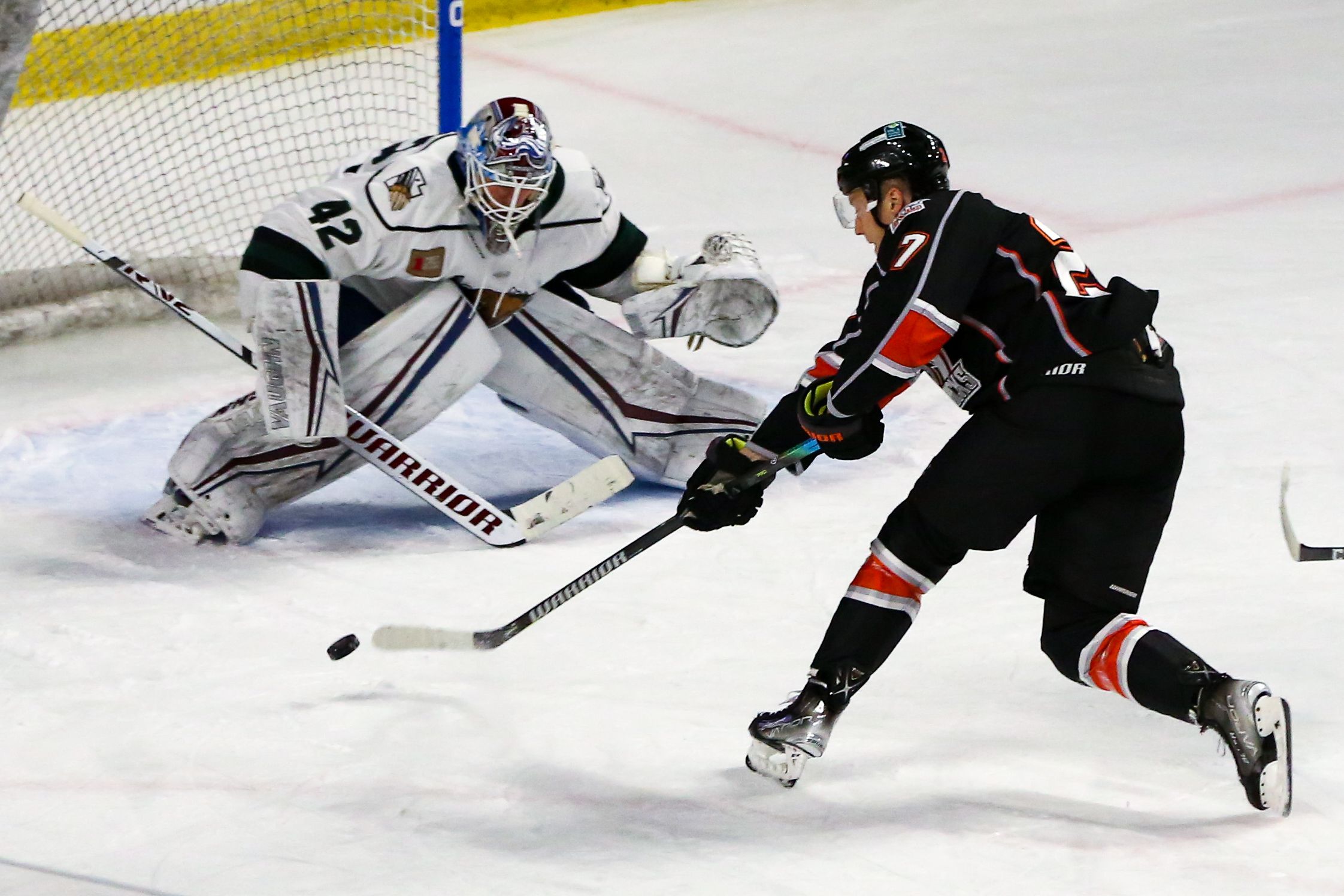 WEST VALLEY CITY, UT- The Grizzlies and the Mavericks took the ice in what was a packed week of everything you could ask for in hockey as the Grizzlies swept the Mavericks, taking the season series with a record of 6-3

It was a night where the Grizzlies scored four second-period goals on their way to a 5-4 overtime win. The Mavericks got the scoring started just over six minutes into the game as Marcus Crawford got a pass from Ryan Olsen who put the puck past Grizzlies’ netminder Peyton Jones. It was then John Schiavo doubling the Mavericks lead 15:38 into the opening period as the puck sneaked past Jones to make it 2-0 before the two teams combined for five goals in the middle frame.

Shortly after the Grizzlies killed off an Austin Crossley minor that took place at the end of the first, it was Miles Gendron getting a centering pass from Luke Martin to cut the Mavericks’ lead in half.

Just three minutes later, it was Schiavo getting his second goal of the game to help his team regain the two-goal lead early in the second. The Grizzlies then started an onslaught of goals scoring three goals in 3:48. Gendron got his second of the game on a rebound on a shot from Charle-Edouard D’Astous, then it was Mason Mannek on a shot from the left circle getting it past Daniil Chechelev for his 18th of the season.

D’Astous would then get in on the fun as he picked up a power-play goal on a rebound shot 15:43 into the second. Ben Johnson tied it on a shorthanded goal with just over six minutes left in the third. It was Benjamin Tardif winning it 2:14 into the extra frame.

Friday’s game was one that only featured four goals, but a lot of penalties as well with D’Astous getting Utah on the board first, getting a nice feed from Tardif who was at the right circle on the power-play. The Mavericks responded quickly as it was Mike Lee receiving a centering pass from Ryan Harrison on a power-play. Then, Anthony Deluca hit the pipe with 7:25 left in the first. In the second period, it was Tardif getting a shot from the left circle, taking a centering pass off of Koletrane Wilson into the back of the net to give Utah the lead with 10:38 left in the second.

It was a relatively fast third period as the only goal came from Mannek as he got an empty-netter shot from just near the Grizzlies bench with two-tenths of a second remaining to seal the Grizzlies victory 3-1.

It was the Benjamin Tardif show on Saturday as he registered four points (3G,1A) en route to a 6-3 win and a series sweep. It was a bad start for Crawford as he took two penalties in the first 5:03. It was Tardif making no mistake on the second power-play after getting a centering pass from D’Astous in the slot, putting it past Matt Greenfield. It’d be followed by Jesse Mychan and Bailey Conger getting two goals within 1:19, giving the Mavericks the lead entering the second.

The Grizzlies are the best team in the ECHL in the middle frame, and they showed it again on Saturday as it was D’Astous and Tardif getting the Grizzlies back on track as they took the lead with exactly a minute left in the second. It was a strong third period for the Grizzlies and a fast start as just 63 seconds in Tyler Penner found Zac Robbins right in the slot giving the Grizzlies a two-goal cushion. That lead wouldn’t last long as Deluca took the puck away and made no mistake on a snapshot from the right circle.

The Mavericks got a power-play with a chance to tie the game up, however, Connor McDonald sprung Luka Burzan on a shorthanded breakaway and despite Greenfield using every inch of his pad, it was Burzan tucking it in between the post and his right pad giving the Grizzlies an insurance goal. Martin took a nasty slashing penalty with 2:20 left in the third. Mavericks trying desperately pulled Greenfield and it was Tardif letting the hats fly at the Maverik Center as he got his third of the game-sealing the series sweep.

Player of the Series

In the three games this week Tardif racked up eight points with five goals and three assists. He made a strong case to be the ECHL player of the week.

Special teams were a factor as on Wednesday night both teams went 1-for-5 while the Mavericks scored a shorthanded goal that night. On Friday none of the three goals came while playing five-on-five hockey. Saturday it was the Grizzlies shorthanded unit scoring two of the six goals giving them the league lead 20 shorthanded goals on the season.

The Grizzlies travel to Boise to take on their biggest rival- the Idaho Steelheads on Friday and Saturday for a critical road trip as after that they will be home for six straight.