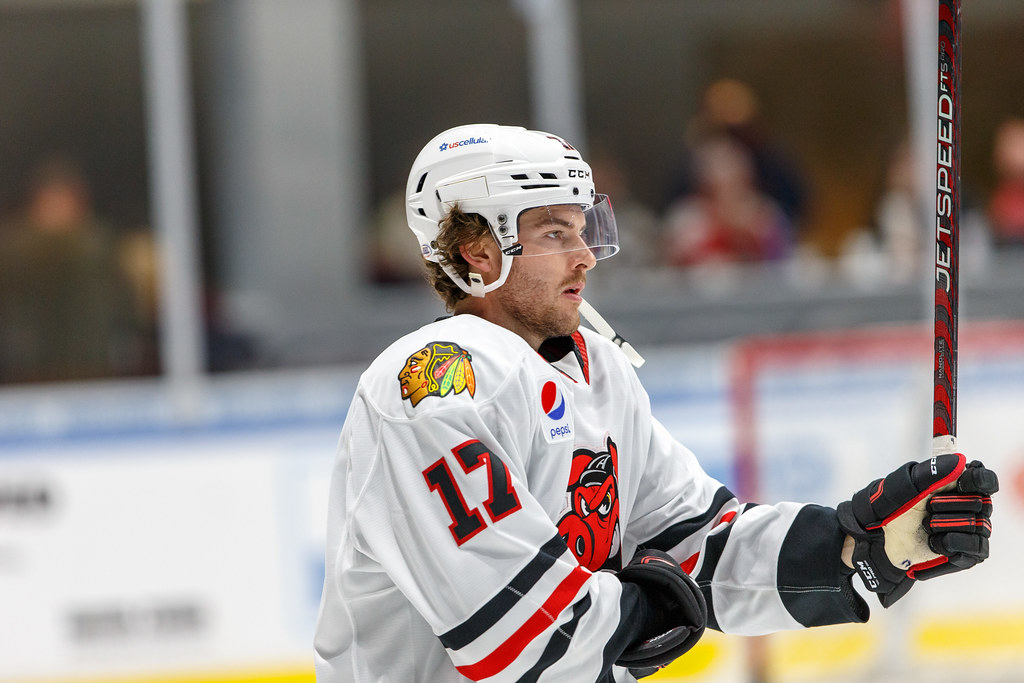 Gust Blows Rockford Past The Wolves

David Gust's five-point game led the IceHogs to a 5-3 victory over the Wolves Friday. (Photo by Todd Reicher/Rockford IceHogs)

Gust Blows Rockford Past The Wolves

Rockford, Ill. – The Rockford IceHogs broke a three-game skid in a big way Friday night, riding a five-point evening by David Gust to a 5-3 win over the Chicago Wolves. The Hogs (2-3) picked up their first win this season at the BMO Center, thanks in part to a flurry of second-period goals.

With a pair of goals and three helpers, Gust factored in on every Rockford goal in the victory. The former Wolves forward now leads the IceHogs in scoring with nine points (3 G, 6 A).

“It’s always nice to come out and have a performance like that,” Gust told IceHogs reporter Katie Florio from the rink after being named the game’s First Star.

The Wolves started strong, taking a 1-0 lead midway through the first on an Alexander Pashin tally. Rockford created some scoring opportunities late in the period but trailed by that score heading into the locker room.

The goal that got the Hogs rolling came off the stick of defenseman Jakub Galvas, who drove to the right slot and went far side on Chicago goalie Zachary Sawchenko. This tied the game at a goal apiece just 2:12 into the middle frame. Gust gave Rockford a 2-1 lead at the 6:15 mark, taking a pass from Brett Seney before splitting the defense and backhanding the puck into the Wolves net.

Chicago knotted the game at 8:39 of the second period when Nathan Sucese put back a long rebound of a David Ferrance attempt. However, the IceHogs responded by capitalizing on a Wolves turnover in their own zone. Mike Hardman deflected a pass attempt to Gust, who sent a shot from the slot past Sawchenko at 14:30 of the second.

The key sequence in the contest came in the closing minutes of the period. With 1:27 remaining, Max Lajoie appeared to tie the game for Chicago. The officials, however, ruled that Lajoie had knocked in the puck with a high stick, disallowing the goal. Rockford took full advantage, getting a deflection of a Galvas shot by Seney with two seconds to play in the second. This gave the IceHogs a 4-2 advantage at the second intermission.

An Alec Regula slapshot 25 seconds into the third period provided plenty of insurance. The Wolves Jamieson Rees closed out the scoring a few minutes later, but the Hogs held on behind Dylan Wells, who picked up his first win in net with 24 saves.