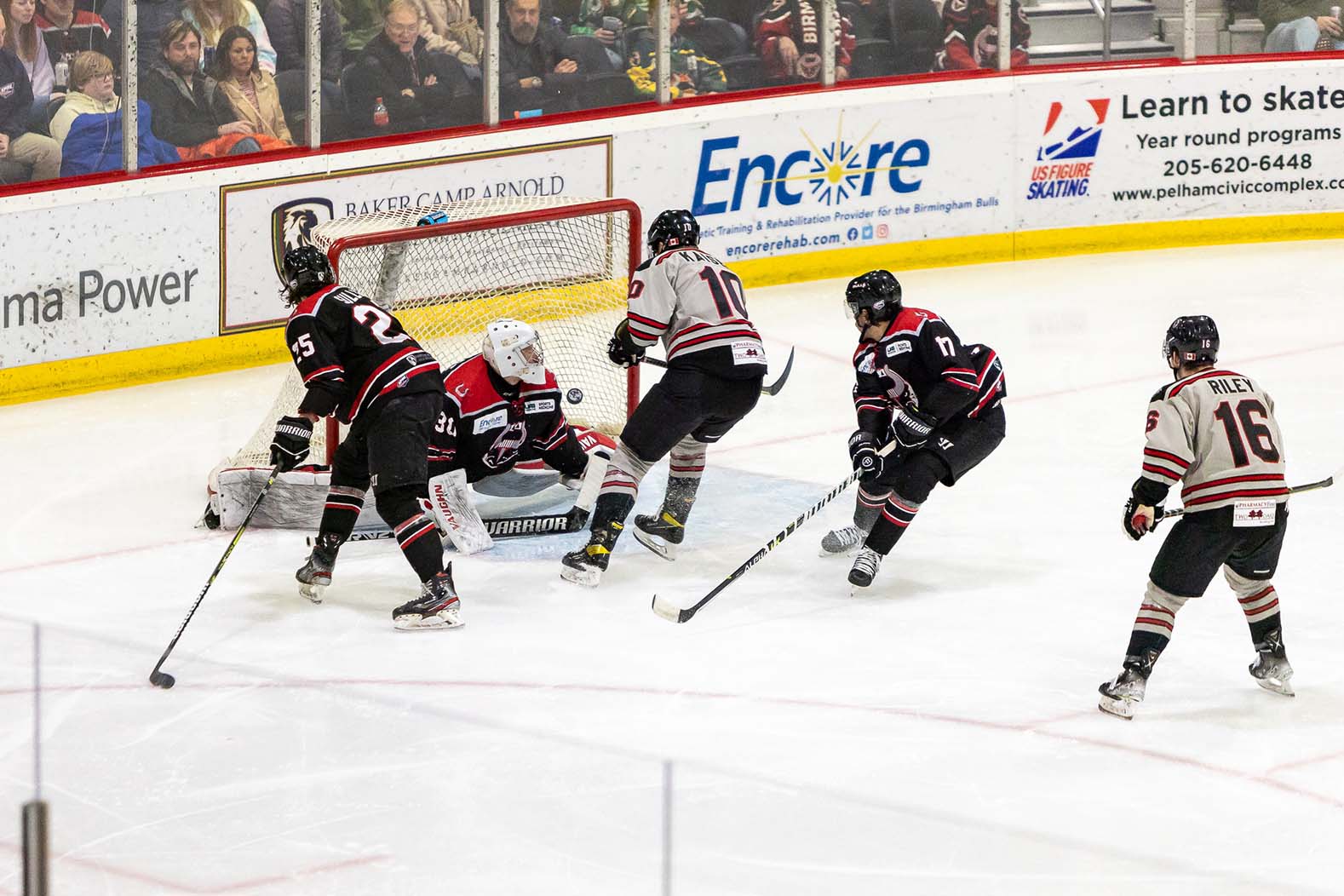 PELHAM, Ala. – The Huntsville Havoc came into Birmingham Friday night looking for a bit of revenge after being shut out 2-0 in their last meeting. Mission accomplished, Zane Steeves and the rest of the Havoc were able to get a shut out of their own. The Havoc took down the Bulls in dominating fashion and finished the night on top by a score of 3-0.

Birmingham came out of the gate playing very well and controlled the play for the first eight minutes of the opening period. All it took, though, was one slip up at the 8:22 mark of the first, and the game had a whole new vibe to it. Sy Nutkevitch found Jacob Barber waiting on the doorstep and dished a perfect pass right in front of the blue paint, and Barber buried the puck in a wide-open net. This was Barber’s first goal at the Pelham Civic Center since signing with the Havoc in the offseason. It’s also noteworthy to say that this goal came on only the third shot on goal for the Havoc, who at this point had been outshot 6-2. The Havoc would get another golden opportunity just past the halfway point in the period when Birmingham’s Alex Cohen was called for hooking, sending the Havoc on the powerplay for the first time of the night. The Havoc would not convert, and the score stayed 1-0 heading into the second period. 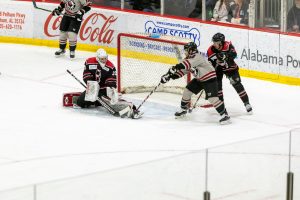 It didn’t take Huntsville long to find the back of the net in the second period. The Havoc came out of the locker room on a mission, and it paid off at the 1:51 mark in the period. Havoc defensemen Nolan Kaiser jumped into the offensive play and took a pass from Kyle Clarke. Kaiser came knocking on the back door and beat Hayden Stewart for the Havoc’s second goal of the night.

Just under six minutes later, Huntsville Havoc’s all-time leading scorer, Sy Nutkevitch, added to his long history of goal scoring with the team when he beat Stewart for the third Havoc goal of the night. He carried the puck into the Havoc offensive zone and took a shot from the top of the left faceoff circle, and Stewart never had a chance. Huntsville held a commanding three-goal lead into the locker room after two. 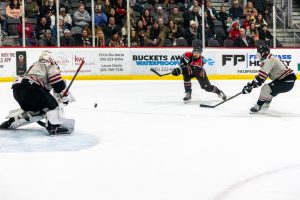 Although no goals were scored in the third, there was not a lack of action. Birmingham went on the powerplay early when Jay Powell got sent to the box for cross-checking. Huntsville didn’t seem bothered by being a man down and played the puck aggressively, not giving the Bulls an inch on the ice.

The Bulls were given another crack at the powerplay a short time later when Powell was once again sent to the box, but this time for a delay of game penalty. Nothing changed with the Havoc’s penalty kill style, and they continued to stay aggressive, which in turn never allowed the Bulls to get set up and get any solid chances.

Just shy of the halfway point in the final frame, Birmingham was given yet another opportunity on the powerplay. This time, Nutkevitch would go to the box for a hooking call. A third powerplay chance…a third stellar penalty kill by the Havoc. Between all three powerplays, the Bulls were only able to register one shot on goal.

Birmingham found themselves having to kill off a few penalties of their own late in the period and was successful, making both team’s PK units a perfect 3-for-3 on the night. The final horn sounded; Huntsville was victorious, which allowed them to reclaim the number one spot in the SPHL standings and become the first team in North American professional hockey to clinch a playoff berth this season. 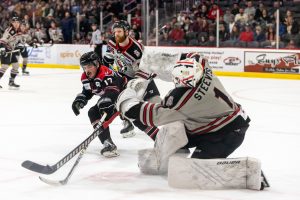 Despite losing to the Havoc, the night wasn’t completely lost to the Bulls and their quest to make the playoffs. The team they are chasing, the Evansville Thunderbolts, also fell on Friday night by a score of 4-3 to the Quad City Storm. With both teams losing, the Bulls still sit 13 points back in the standings of the eighth-seeded Thunderbolts and have two more chances to close that gap this weekend.

Next up for the Bulls are two road games to finish the weekend. Saturday, they travel to Macon to take on the Mayhem; Sunday, they will get another crack at the Havoc, but this time it will be in Huntsville.