The Iowa Wild found themselves trailing by two goals twice on Friday evening, pulling within a goal on both occasions. 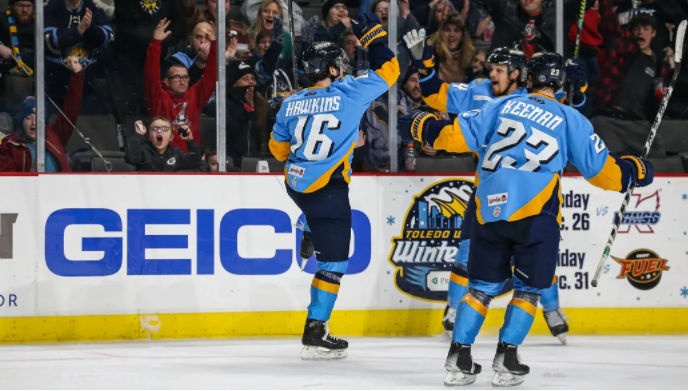 TOLEDO, Ohio – The Iowa Wild found themselves trailing by two goals twice on Friday evening, pulling within a goal on both occasions. However, they could not get the equalizer, falling to the Toledo Walleye, 4-3. Kaid Oliver and Riese Zmolek each had a goal and an assist for the Heartlanders. TJ Hensick and Brandon Hawkins each had two points for the Walleye.

This was a penalty-filled first period that saw five minors and four power plays. Toledo did not take advantage of their opportunities, but they scored shortly after Iowa killed off a penalty. That came at 10:32 when Hawkins intercepted a passing attempt inside the Iowa zone, then quickly released a laser wrist shot that beat Corbin Kaczperski for his seventh goal of the year.

The lead was held for five minutes before the Heartlanders used the power play to tie the score. Just 31 seconds after Brady Tomlak went off for cross-checking, Jack Billings entered the Walleye end on a 2-on-1 break. Billings fed the puck to Zach White in the slot who beat Max Milosek with a wrist shot with his third goal of the year, tying the game at one.

The score remained tied into the first intermission and through the first six minutes of the second period, but the Walleye scored a pair of goals 94 seconds apart to give Toledo a two-goal edge. The first came at 6:23. Mitchell Heard had the puck in the corner, finding Chris Martenet coming down the slot. Martenet did not shoot right away, waiting patiently for a few moments before firing a wrist shot over the shoulder of Kaczperski for his first goal of the year.

At the 7:57 mark, the lead became two. Moments after Milosek made a great save on a point-blank shot, Toledo went the other way. Cole Fraser carried the puck through the neutral zone, passing it to Hensick once they entered the Heartlanders zone. Hensick moved the puck across the slot to Austin McIlmurray, who was just above the right faceoff circle. McIlmurray lifted a wrist shot into the upper corner for his second goal of the year, giving Toledo a 3-1 lead.

The Heartlanders got one of those goals back at the 12:23 mark when Oliver scored his fifth goal of the year. This time it was Kaczperski coming up with the big save that got his team ramped up. Carter Shinkaruk knocked the rebound to the corner where Jake Smith scooped it up, then made a great feed through the neutral zone and onto the stick of Oliver, sending him in on Milosek on a breakaway. Oliver moved to his forehand, then lifted a backhand shot just under the crossbar to cut the deficit to one.

The Walleye restored their two-goal lead 4:36 into the third. This time it was Toledo using the big homerun pass as Hawkins fed the puck up to Hensick before he entered into the Heartlanders end, creating a 2-on-1. Hensick moved in toward Kaczperski, drawing the netminder toward the right side of the net before feeding the puck to the backdoor where Brandon Schultz tipped the puck to make it a 4-2 game.

Iowa cut the deficit back to one just before the six-minute mark. This time it was the power-play delivering a big goal again, as Zmolek blasted a shot from the point that beat Milosek for his second goal of the season.

From there, the Walleye clamped down, holding Iowa to four shots over the final 14 minutes. Two of those came in the final minute when the team had pulled Kaczperski for the extra attacker, but Milosek made the one-goal advantage stand. The Walleye netminder finished with 29 saves. Kaczperski stopped 37 shots.

The Heartlanders move onto Wheeling to take on the Nailers for the first of two games starting on Saturday evening. The puck drops at 6:15 Iowa time.