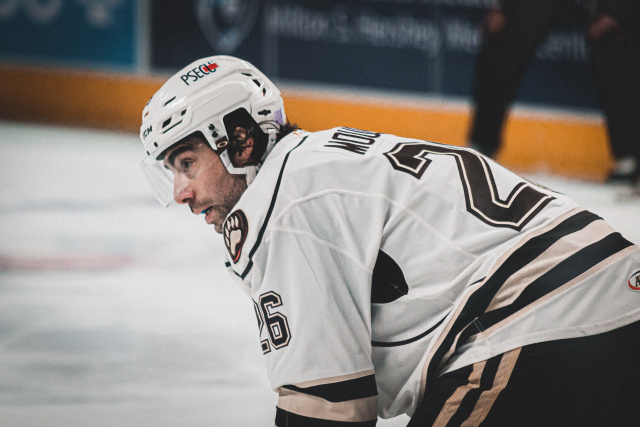 HERSHEY, Pa. – The Hershey Bears revealed that the club has re-signed veteran forward Matt Moulson to a one-year AHL deal on Friday. The 36-year-old forward returns after leading the team in goals (22), power play goals (11), and finishing second on the team in points (41) in 2019-20.

Moulson was a huge addition for the Hershey Bears in the summer of 2019. Signed to an AHL deal by the Bears, Moulson moved from the Ontario Reign across the country to Chocolatetown, USA (along with his teammate Phil Maillet) to help bolster a group that lost a lot of scoring that summer. Moulson was all that was advertised and then some this past season as Hershey’s leading goal scorer and second overall point producer. He also skated in his 1,000th professional game in January, as well as earning an All-Star nod as the Atlantic Division captain. Moulson will look to make a lengthy postseason run with Hershey in 2020-21 to make a bid for a Calder Cup.

The writing was on the wall for this signing earlier in the spring. Speaking to media via Zoom after the remainder of the AHL season was officially cancelled, Moulson said if the Bears had gone on a lengthy playoff run this year, he would have likely retired.

However, he quickly followed that up by saying he’d be interested in returning next season (via Chocolate Hockey / Kyle Mace): “…if they’d have me. [It’s] an unbelievable place to play.” It was hard to imagine the Bears having anything less than a massive interest to retain Moulson, who had been a spark for the team all season long.

Moulson started his first Hershey season very well with a four-game point streak (two goals, three assists), doing most of his damage from down low in the dirty areas. He scored seven goals in 11 games during the month of December, with the Bears winning ten of those contests. The most memorable of those games was a contest on December 22 — the last game before Christmas — where Moulson scored two goals and made a brilliant pass to send Maillet in on a breakaway and resulted in the game winner, giving Hershey an early gift in a comeback win.


Moulson was clutch all the way to the end for the Bears, coming up with perhaps his best goal in Hershey’s last game by burying a rebound off a blocked shot. The goal would tie a big game against the Providence Bruins with two seconds on the clock. He also fhad at least one point in five of the last six games that the Bears played in 2019-20, and always seemed just where he needed to be at the right time. Moulson’s 11 power play goals accounted for 33.3% of Hershey’s man-advantage strikes during the regular season — just one more aspect in which the veteran forward dominated.

Here’s the late goal as clutch as they come for Matt Moulson!! pic.twitter.com/h10C5oiakK

The Bears did well with this signing, rolling out the red carpet for Moulson to try and lead the club to a deep postseason run in 2020-21 (in whatever form that season could take place). Not only do his statistics speak for themselves as to how valuable of a player he is to the team, but having his veteran experience for the young players to learn from is of equal importance.

Hershey did a pretty good job of keeping their momentum rolling in the absences of Mike Sgarbossa and Joe Snively in the month of January when both players were out due to injury; a lot of that has to do with Moulson’s strong leadership. That same leadership will be a big reason for the Bears’ success in 2020-21.

It’s a massive crime that the Bears were not able to see their season through to the end with Moulson in the fold. Although Hershey will technically finish the 2019-20 season in second place (back one point to the Providence Bruins), the campaign was Hershey’s most dominant season since the 2015-16 campaign where they went all the way to the Calder Cup Finals.