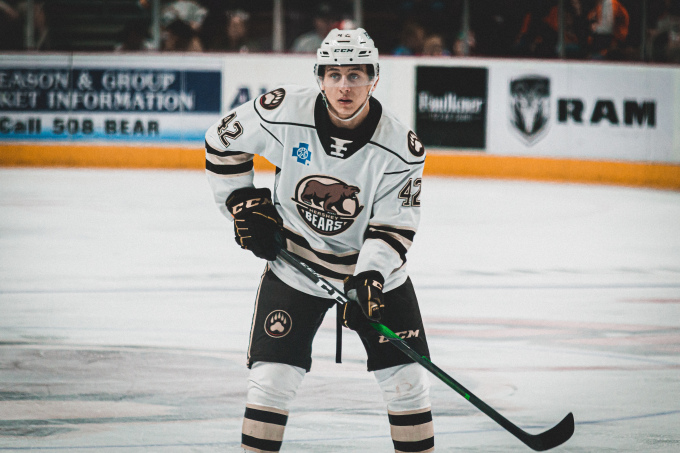 Martin Fehervary held his own very well in making the transition to North America for the first time in his career, and all signs point to him becoming a major piece of the Washington Capitals in the future.

HERSHEY, Pa. – The 2019-20 season was shaping up to be a huge one for the Hershey Bears, who found a lot of production and success from a core that has rapidly been getting younger. The most significant piece of evidence to support this was on the blue line, where the Chocolate and White had a total of 115 games of experience shared between three rookie defenders in Alexander Alexeyev, Bobby Nardella, and Martin Fehervary. Fehervary held his own very well in making the transition to North America for the first time in his career, and all signs point to him becoming a major piece of the Washington Capitals in the future. The future became the present for Fehervary as the first-year defender made his Stanley Cup Playoff debut on Sunday afternoon in a 2-1 win for the Caps over the Boston Bruins.

Fehervary’s high regard within the organization as a capable defenseman became apparent early on, as the Caps dressed the 20-year-old for six games at two different points this season – three games in October and three games in February. Fehervary recorded his first NHL point in an assist during a February 8 loss to the Philadelphia Flyers. Fehervary notched four goals and ten assists in 56 games in Hershey this season and finished with an impressive plus-15 in that span.

Fehervary excelled at scoring off the rush, as his first goal came shorthanded on a quick counter-attack in the Bears’ 5-1 win over Wilkes-Barre on October 13. Fehervary has an excellent skating ability that allows him to make those rushes happen, and he’s demonstrated that he can finish those scoring opportunities when he gets them. Although the plus/minus statistic isn’t perfect, his plus-15 is very impressive and was second only to Tyler Lewington’s plus-17 on the campaign for Hershey, and shows that Fehervary is a positive contributor to the team’s efforts on the ice. Advanced statistics back up that claim very nicely, as Sean O’Brien pointed out on Twitter:

The graphic uses a player’s statistics to help determine how many of his team’s points he was responsible for earning, and Fehervary ranks amongst the best in the AHL in terms of this graphic, particularly in defensive point shares. It’s just another in a long list of reasons that show Fehervary’s worth to this team, and it’s a big reason why he’s gotten NHL time with the Capitals so far this season. With the contracts of Radko Gudas and Brendan Dillon set to expire once the 2019-20 season officially concludes, it will be interesting to see how the Caps go about replacing them with some signings to be made or if the team may bring him on full-time in a similar manner to Jonas Siegenthaler in past years.

Martin Fehervary scores to make it two for Hershey! pic.twitter.com/14pUwo8lzX

Then again, if Fehervary returns to Hershey in 2020-21, it would be a huge addition to the Bears’ lineup, as Fehervary was one of the very best to don the team’s colors this past season and be a huge benefit for the club to have. Hershey’s blue line is shaping up to be pretty packed as it was last season, but having a defender of Fehervary’s caliber is invaluable to a team with hefty postseason aspirations, and it would be nice for as much of the promising 2019-20 team to return as possible. It was great seeing Fehervary suit up for the Caps and helping them get a big win to improve their standings in the Round Robin, and it remains to be seen if he’ll get more time as the Caps gear up for the first round against the New York Islanders.