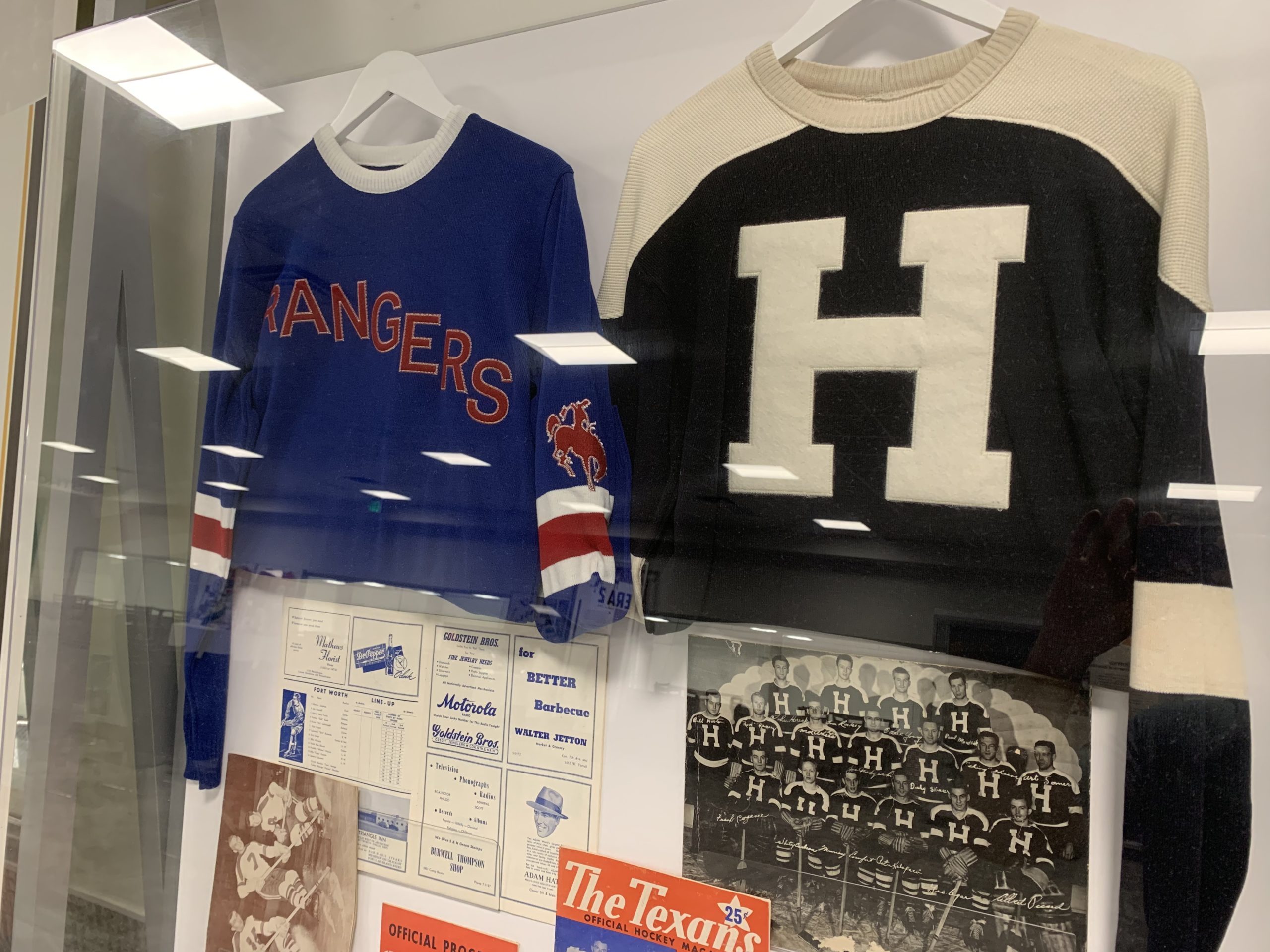 FARMERS BRANCH, Texas – The Children’s Health StarCenter is an ice rink like many others. What may not be readily apparent to guests, though, is the hidden gem on the second floor of the rink — a repository of hockey artifacts in the Lone Star State, the Texas Hockey History Center.

FARMERS BRANCH, Texas – The Children’s Health StarCenter is an ice rink like many others. The scent of Zamboni fumes and the stench of hockey pads float through the air as sounds of skates being sharpened and an irate hockey parent getting carried away over a missed call rattle your ears. I know this rink well; I grew up playing countless hours here, and love coming back for stick and puck sessions when I’ve got the time. What may not be readily apparent to guests, though, is the hidden gem on the second floor of the rink — a repository of hockey artifacts in the Lone Star State, the Texas Hockey History Center. Up here is a lesson through the sport’s history in Texas, which is surprisingly vast, along with exhibitions and memorabilia from some of the state’s most notable minor league teams. 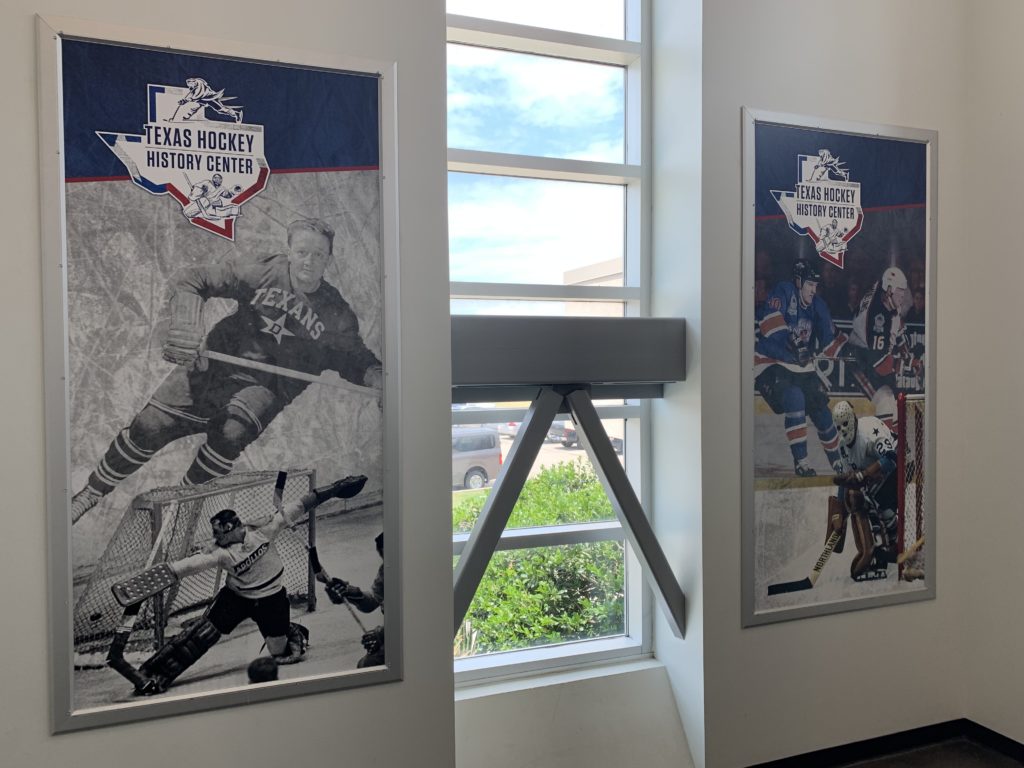 LONE STAR HOCKEY THROUGH THE YEARS

The hallway leading to the exhibitions is lined with a timeline of hockey in Texas over the decades, dating back to the 1920’s when the sport was first being played in an organized fashion. The sport grew, and in the 1930’s, Rice University had a club hockey team. 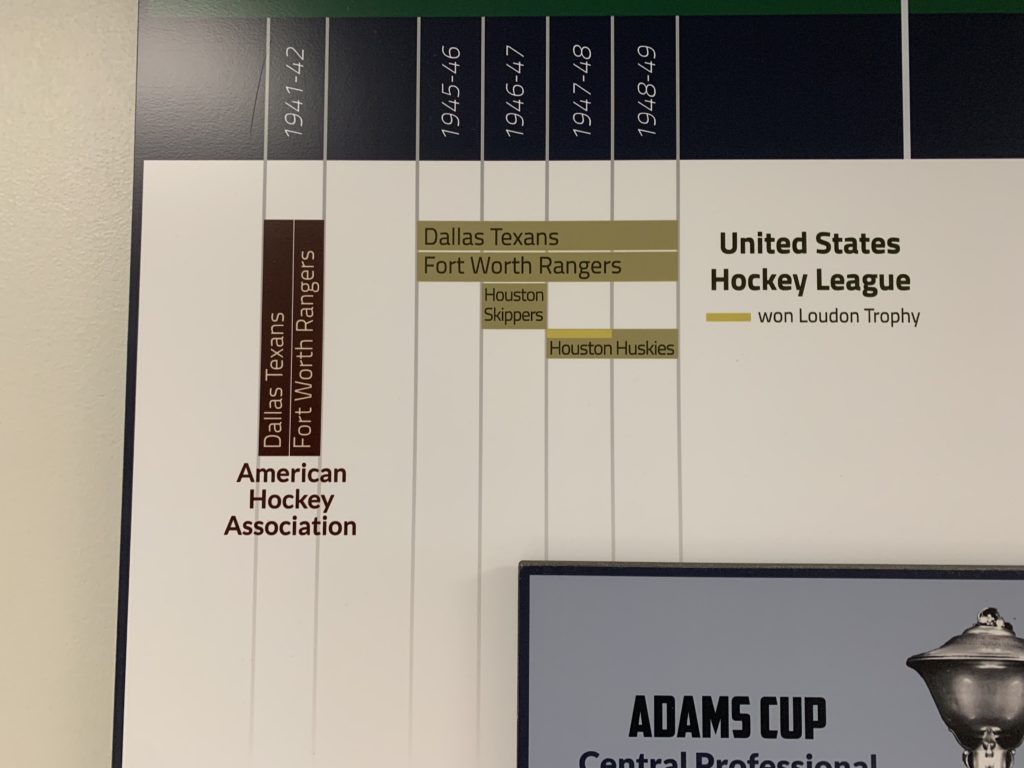 The first pro teams made their way to the state in the 1940’s, when the Dallas Texans and the Fort Worth Rangers formed a rivalry as members of the American Hockey Association and then the United States Hockey League. 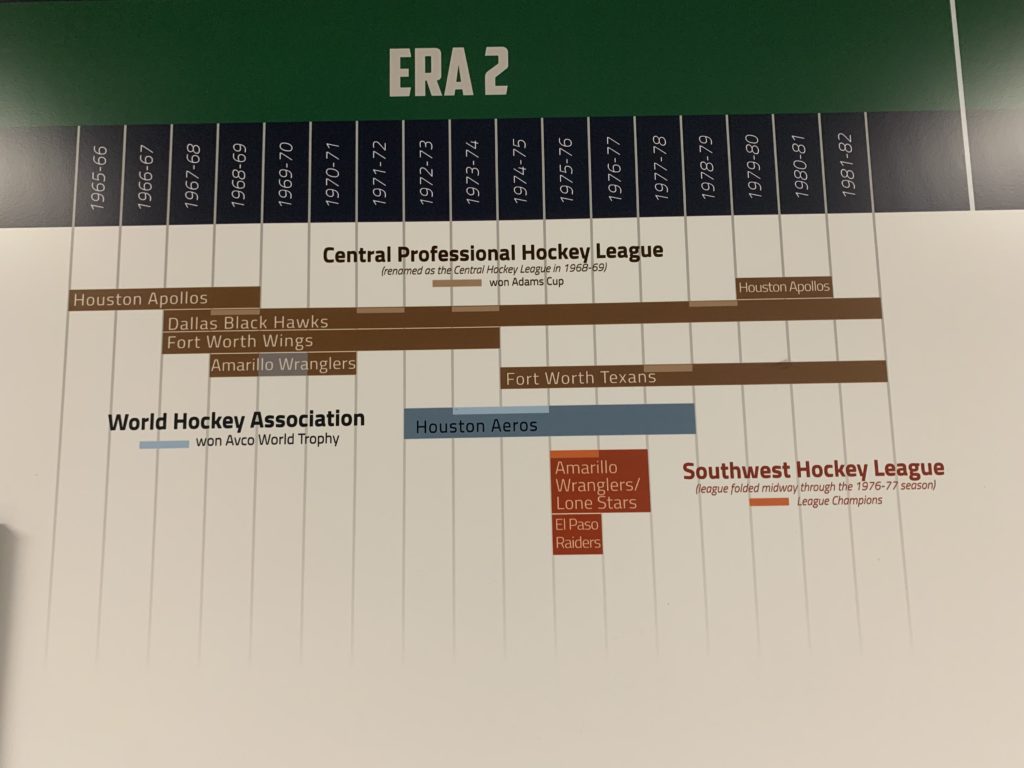 Just as the Houston Huskies won their league trophy in the late-40’s, future Texas-based pro hockey franchises also captured championships in their respective leagues. Title-winning teams included the original Central Hockey League’s Dallas Black Hawks (’69, ’72, ’74, and ’79) and Fort Worth Texans (’78); the Amarillo Wranglers of the Southwest Hockey League (’76); and the World Hockey Association’s Houston Aeros (’74 and ’75).

THE 1990’S TO PRESENT: HOCKEY EXPLOSION 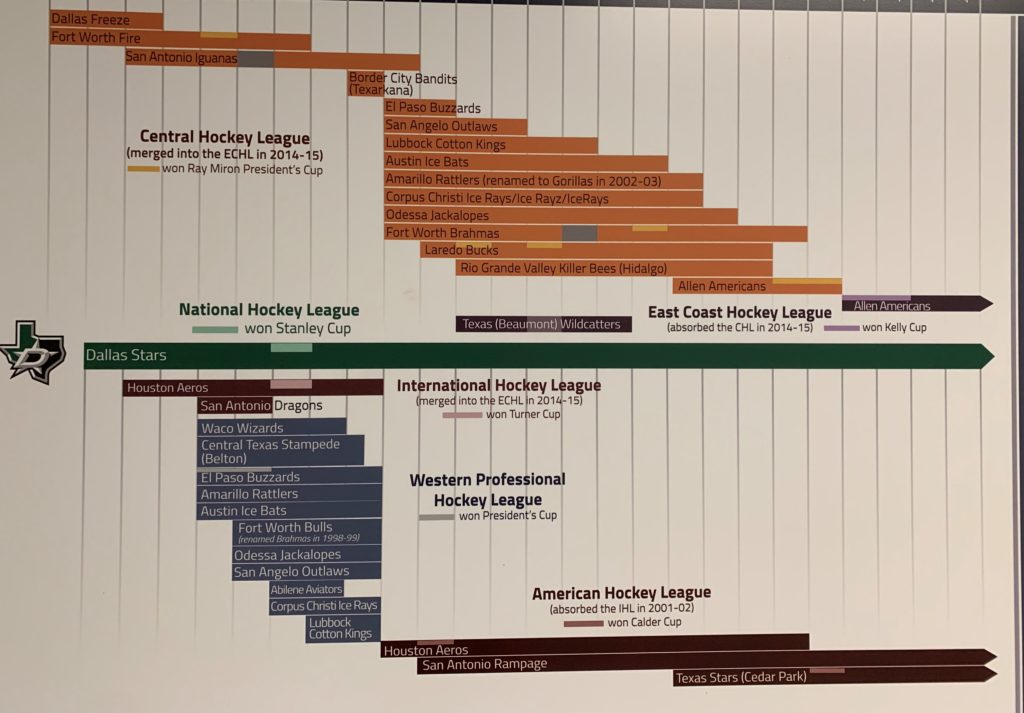 Hockey continued to grow and flourish in the late 90’s and early 2000’s. The state boasted as many as 15 teams at one point, as the CHL, IHL, NHL, and WPHL all had franchises in Texas.

PIT STOPS ON THE WAY TO THE HHOF 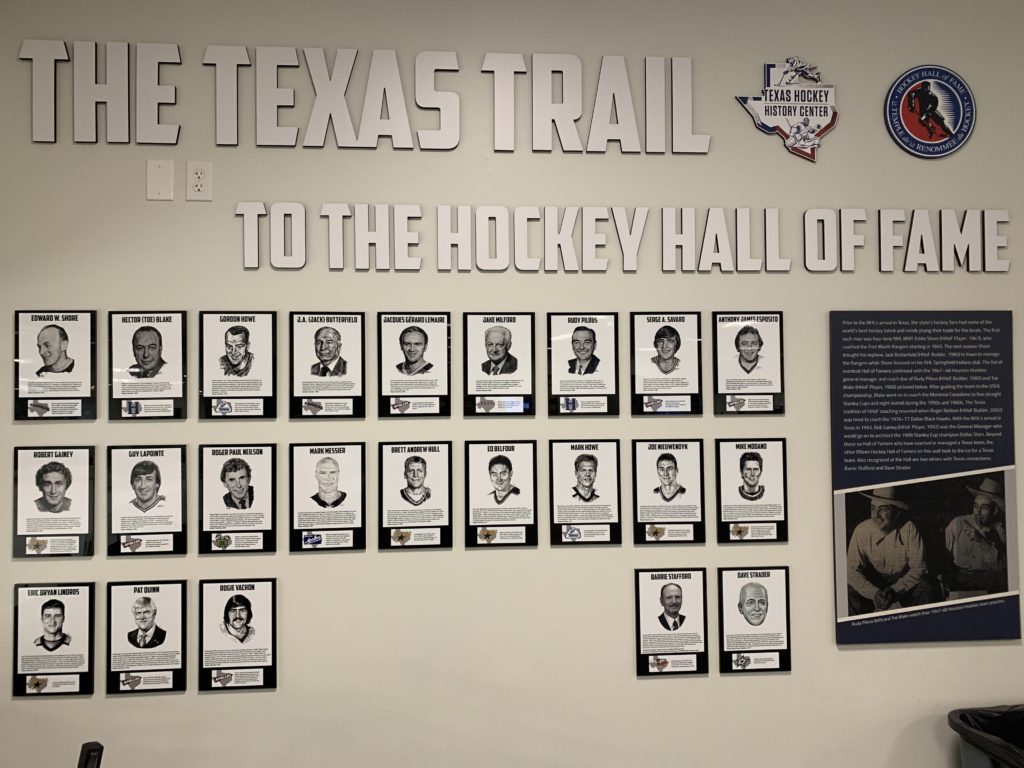 Inside the Texas Hockey History Center is a wall of plaques commemorating the greats that have helped grow the game here. Obvious names like Mike Modano, Gordie Howe, and Bob Gainey have their rightfully held spots on this wall. But, so do names you wouldn’t immediately associate with hockey in Texas — like Tony Esposito and Pat Quinn — who were both members of the Houston Apollos.

The exhibitions themselves are something to marvel at. Jerseys, pucks, gloves, and even trophies are free to view and will take up hours of your time if you’re anything like me. Have a look for yourself. 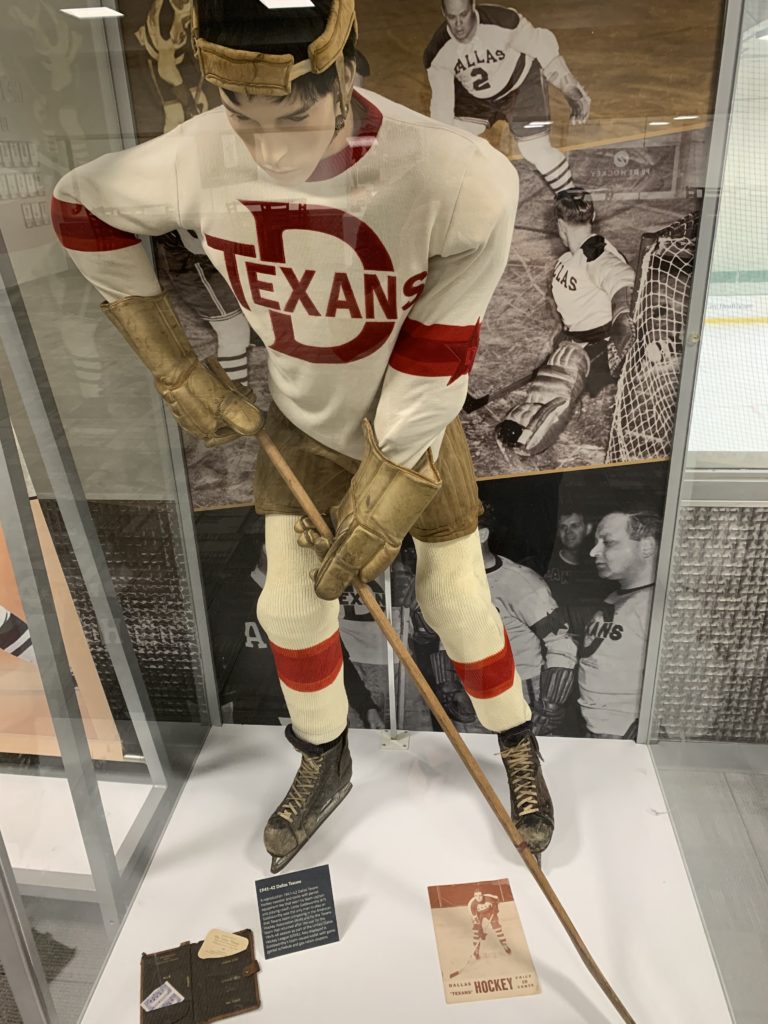 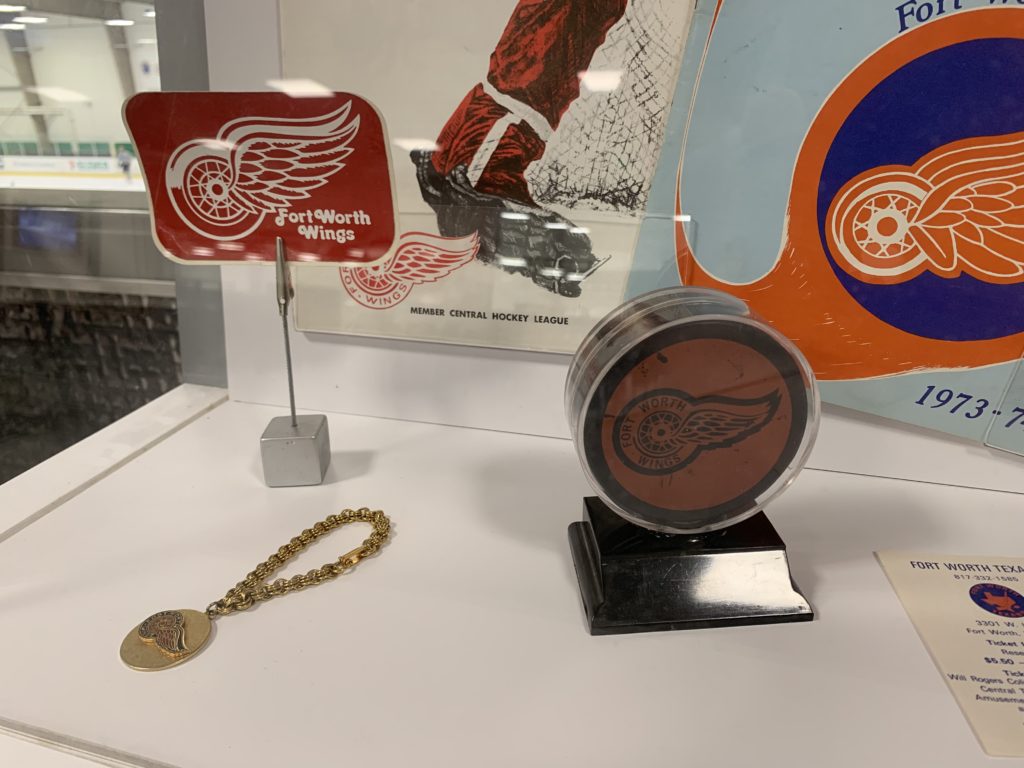 As you may be able to guess, the Texans had an affiliation with the New York Islanders. 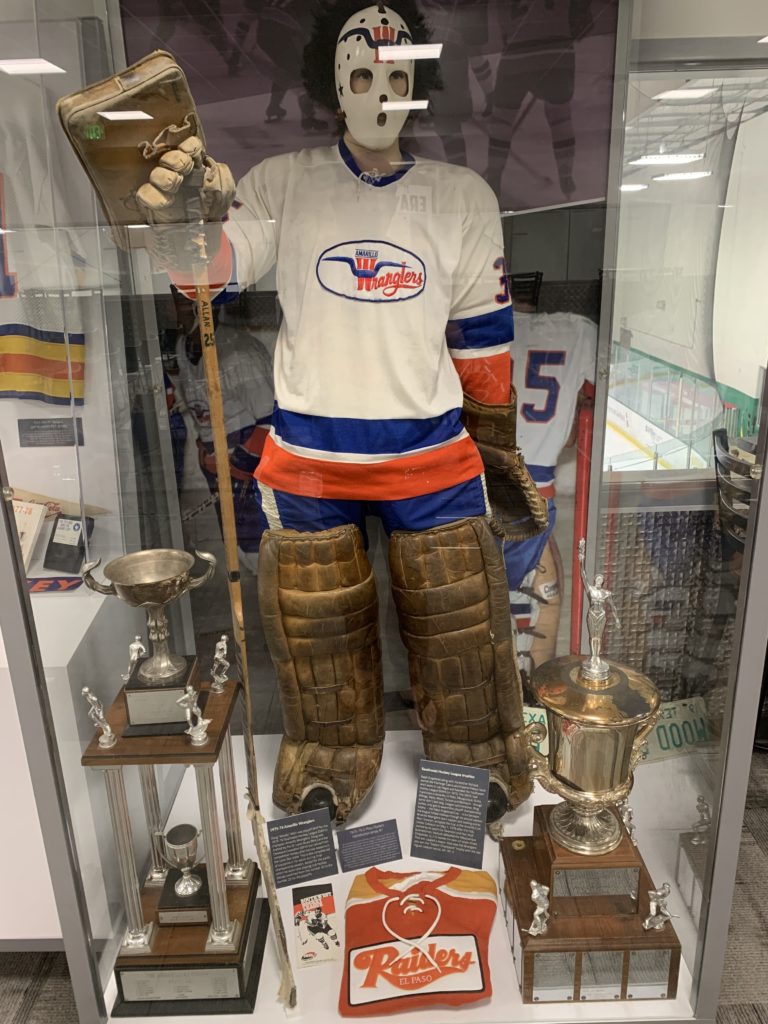 The Wranglers were a farm team for the Pittsburgh Penguins. 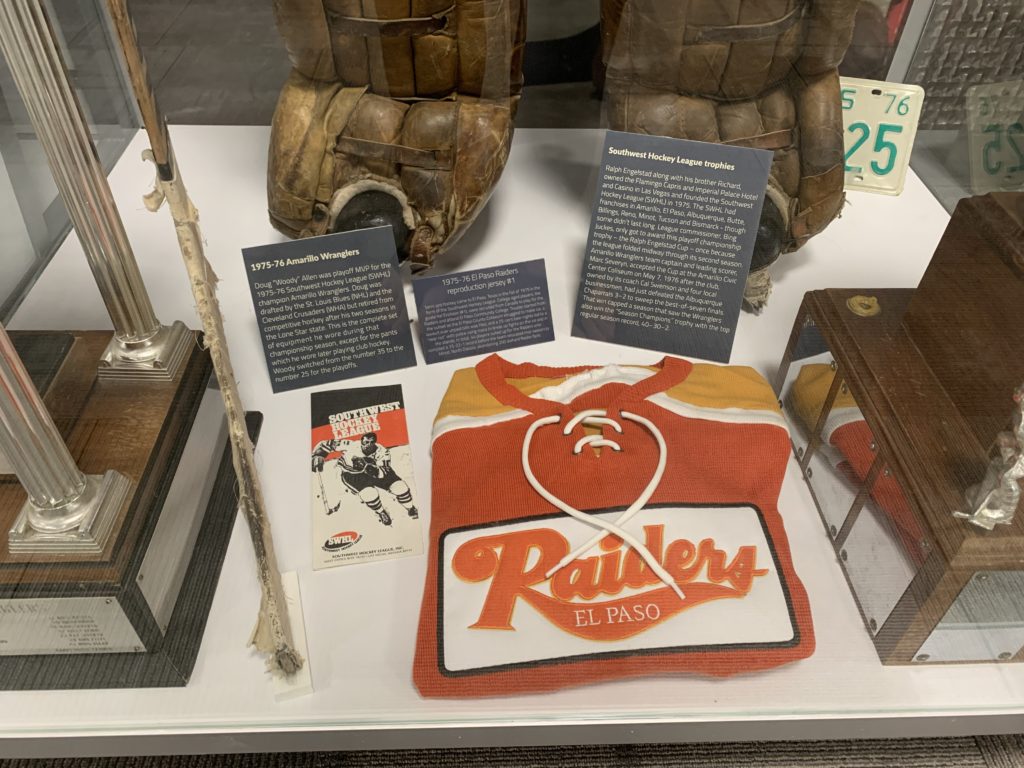 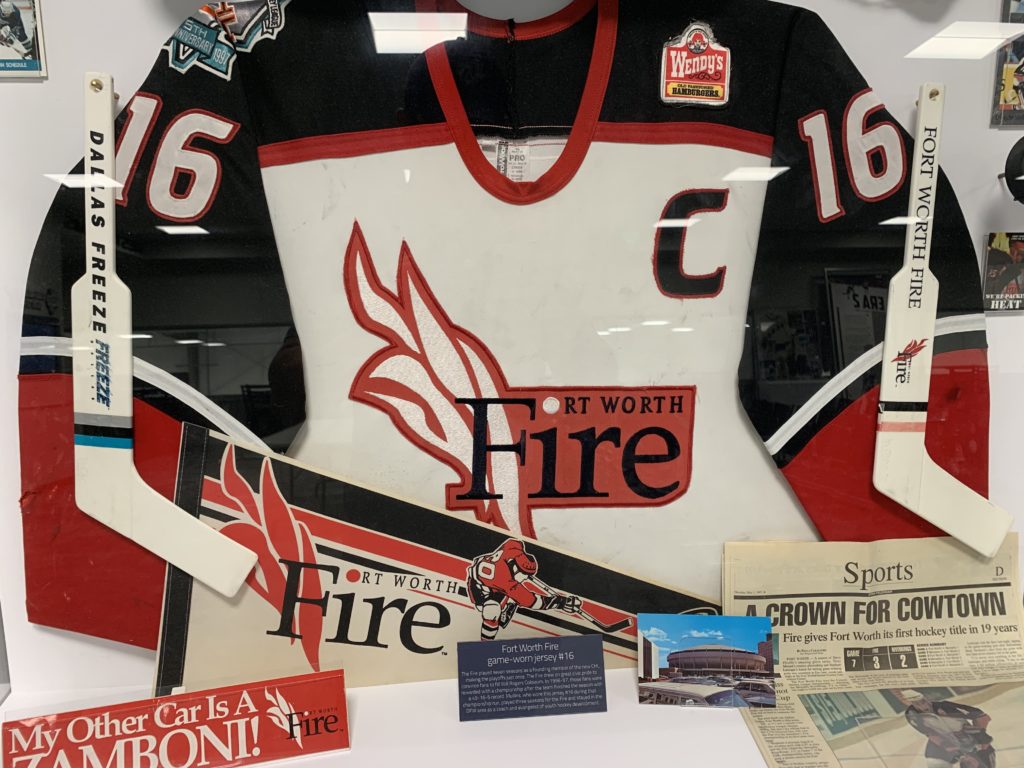 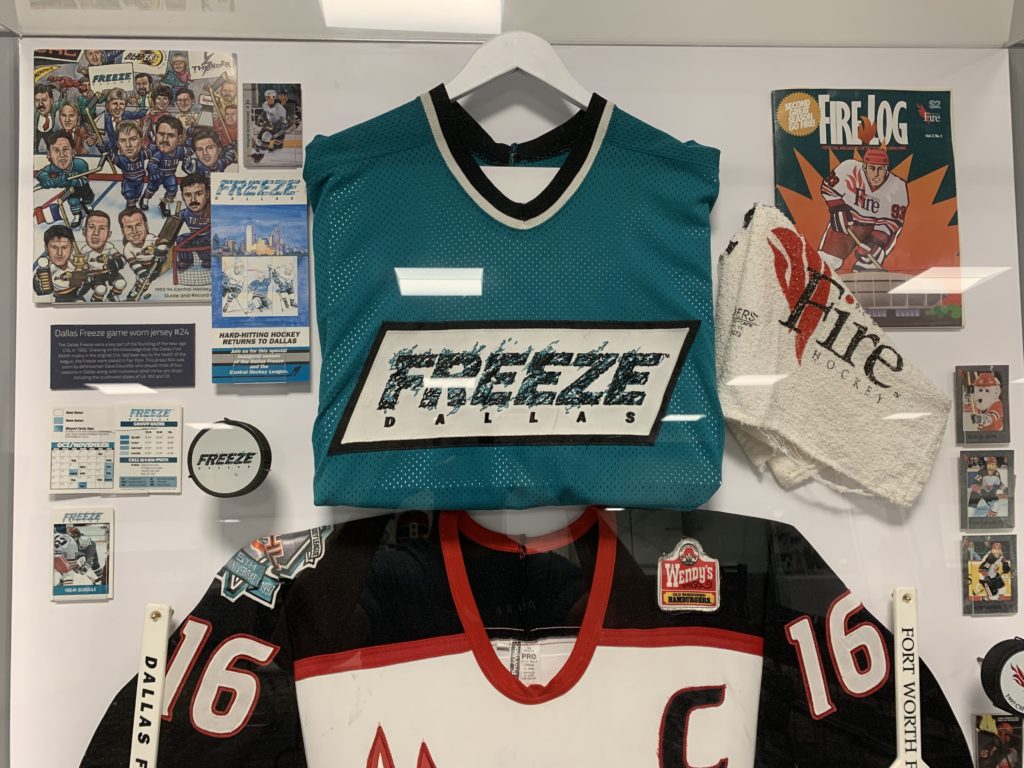 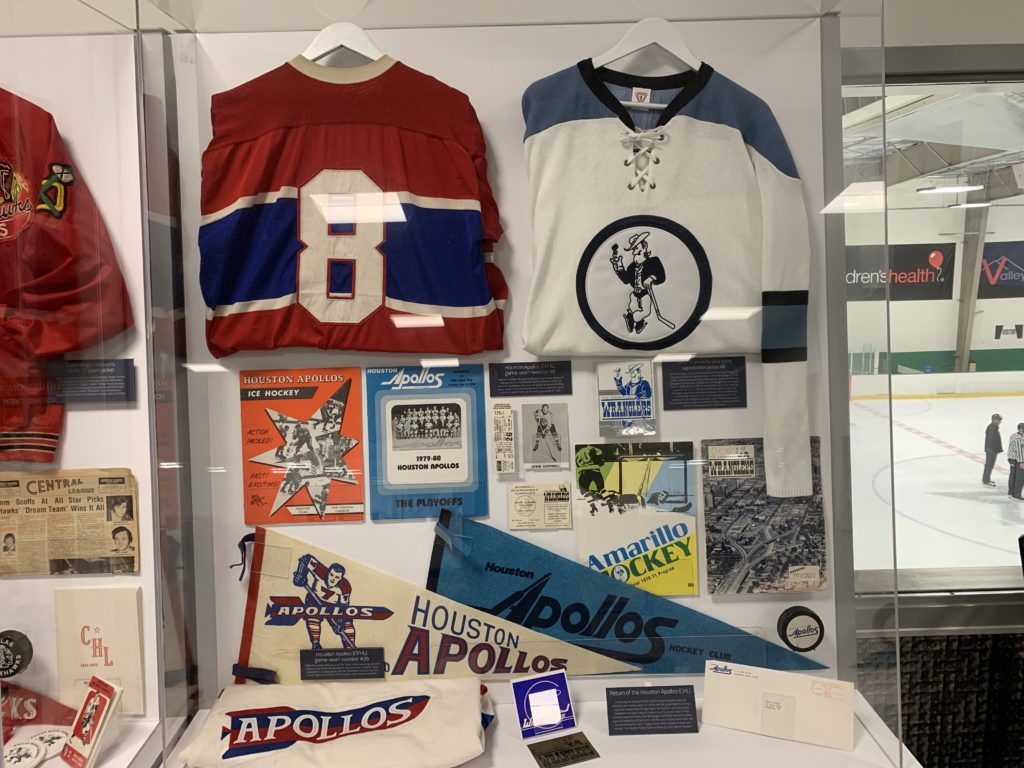 The aforementioned Apollos were an affiliate of the Montreal Canadiens. 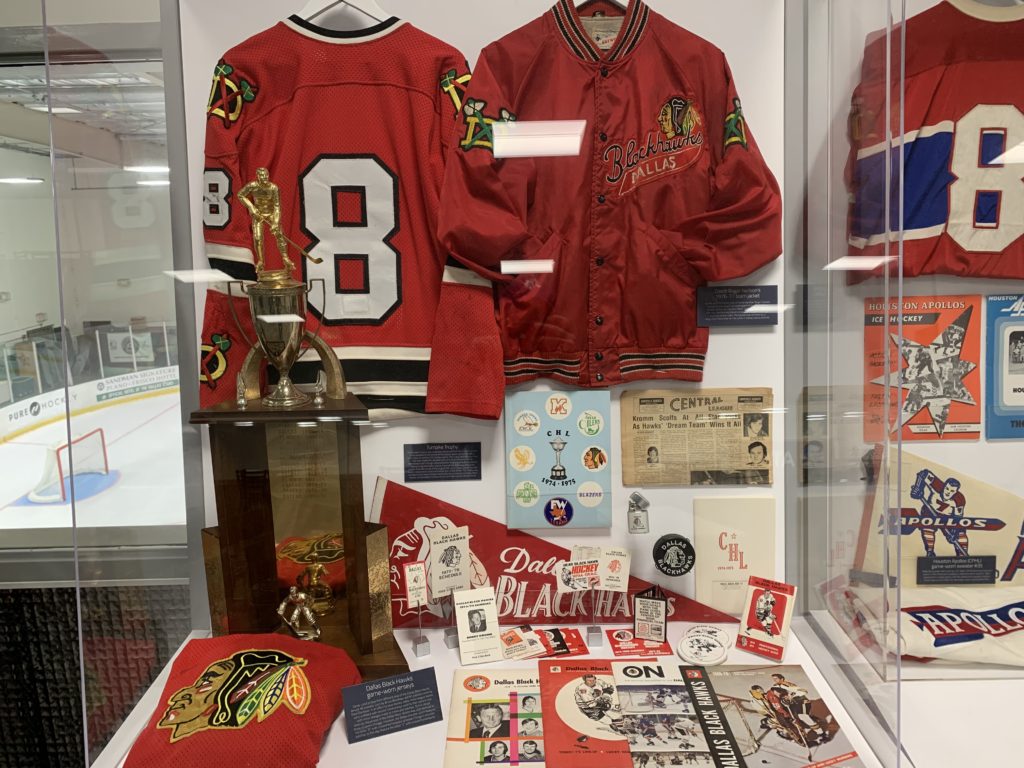 The Black Hawks played their games at the State Fair Coliseum (built in 1955). 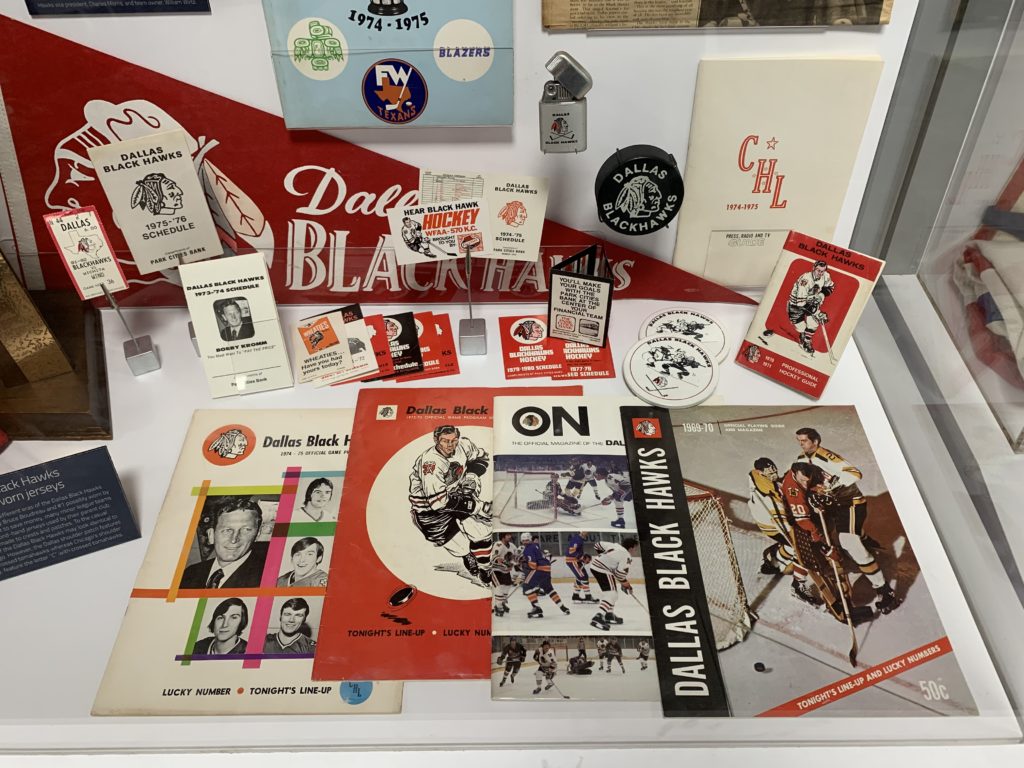 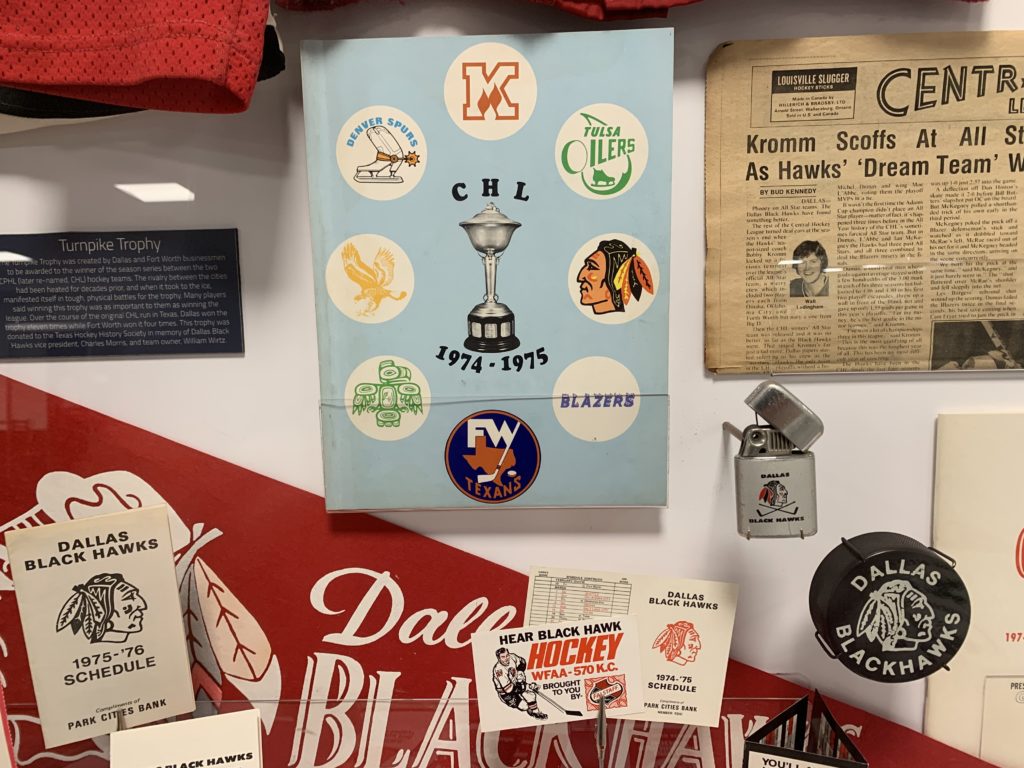 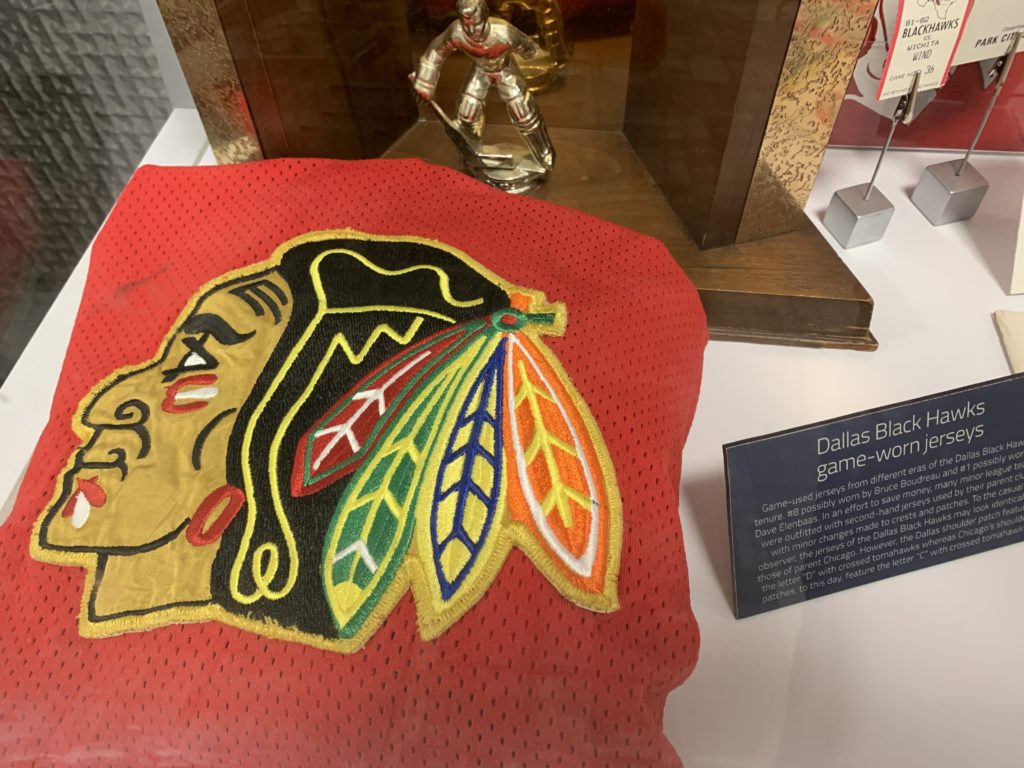 It is no surprise, looking at Dallas’ jersey, that the Chicago Black Hawks (sic) were the team’s parent club from 1967-78. 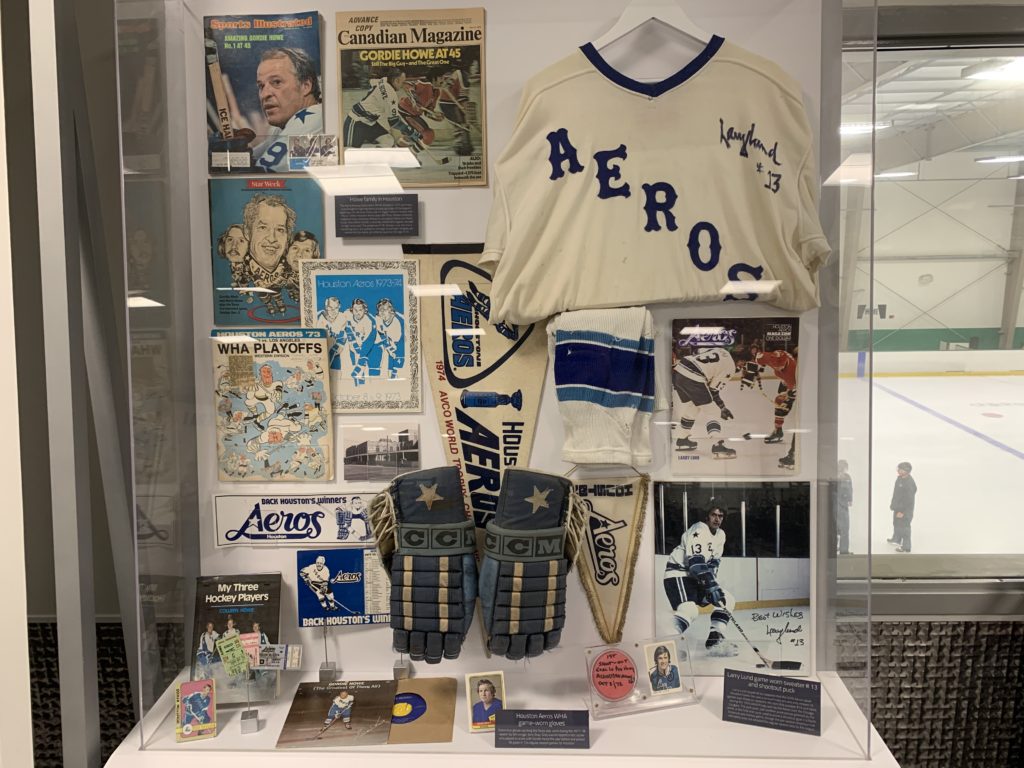 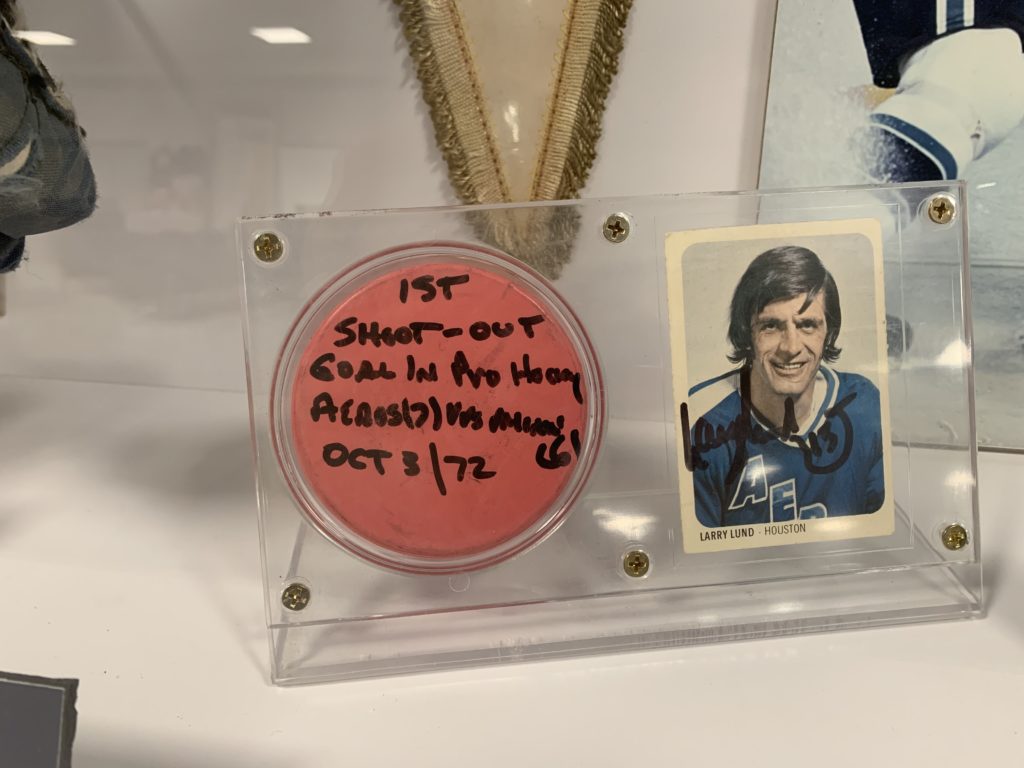 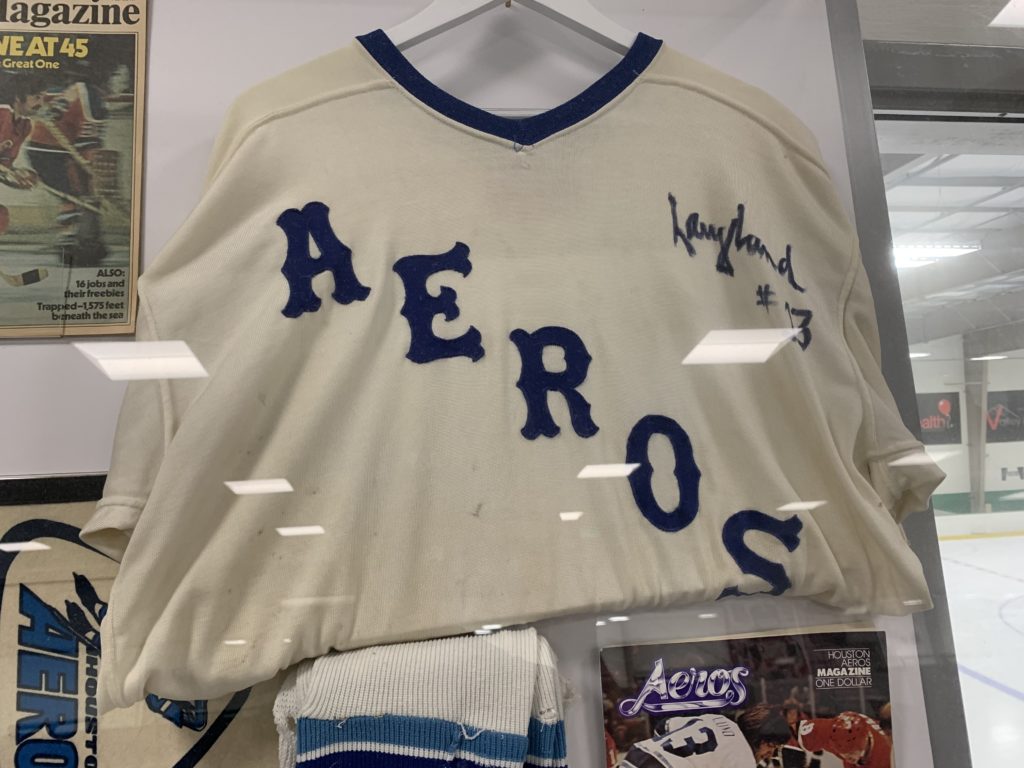 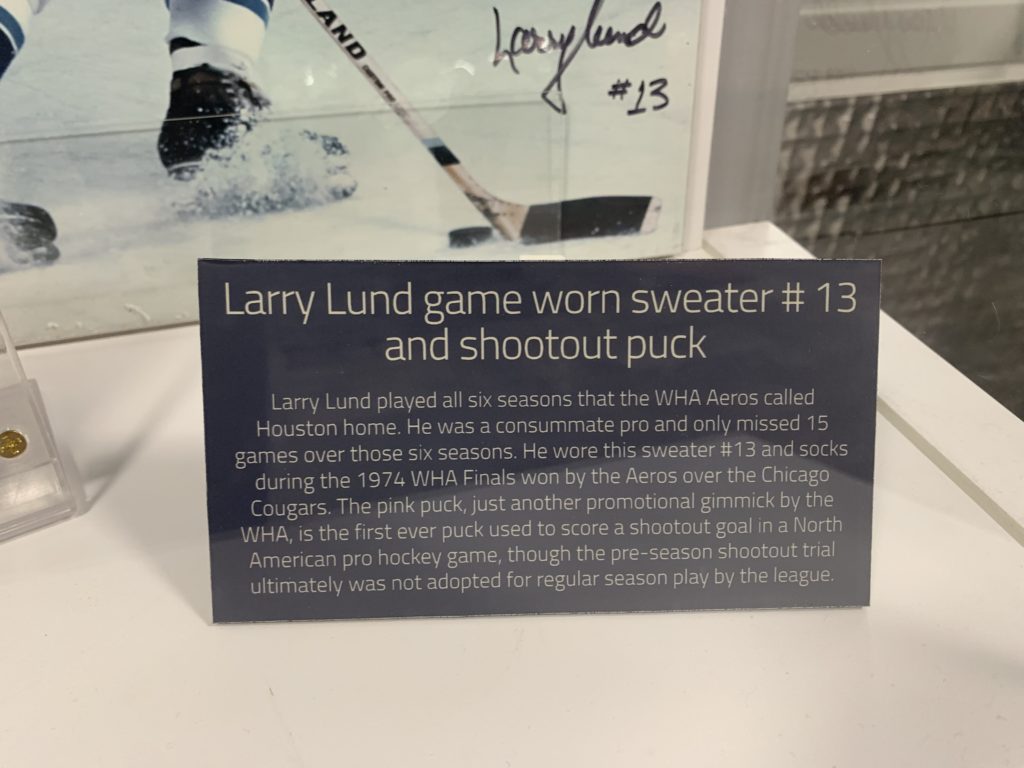 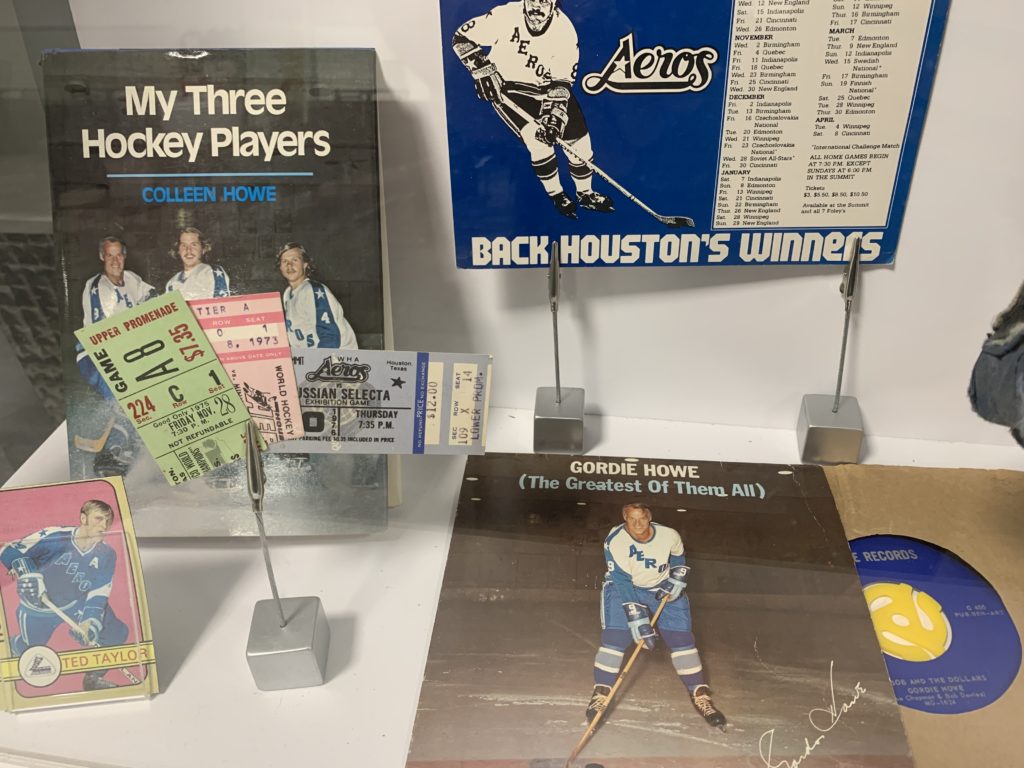 One of the best hockey players of all time, Gordie Howe had the unique opportunity of playing with his two sons, Mark and Marty, on the Aeros from 1973-77. 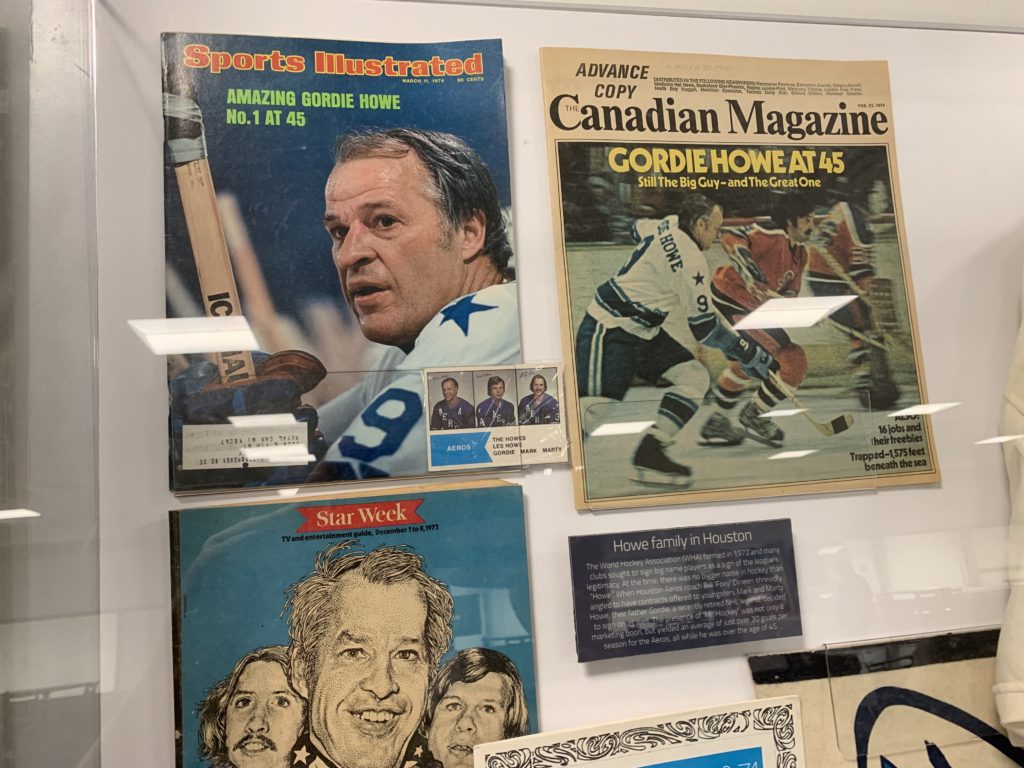 The Texas Hockey History Center is open to the public and is on the second floor of the Children’s Health StarCenter in Farmers Branch.