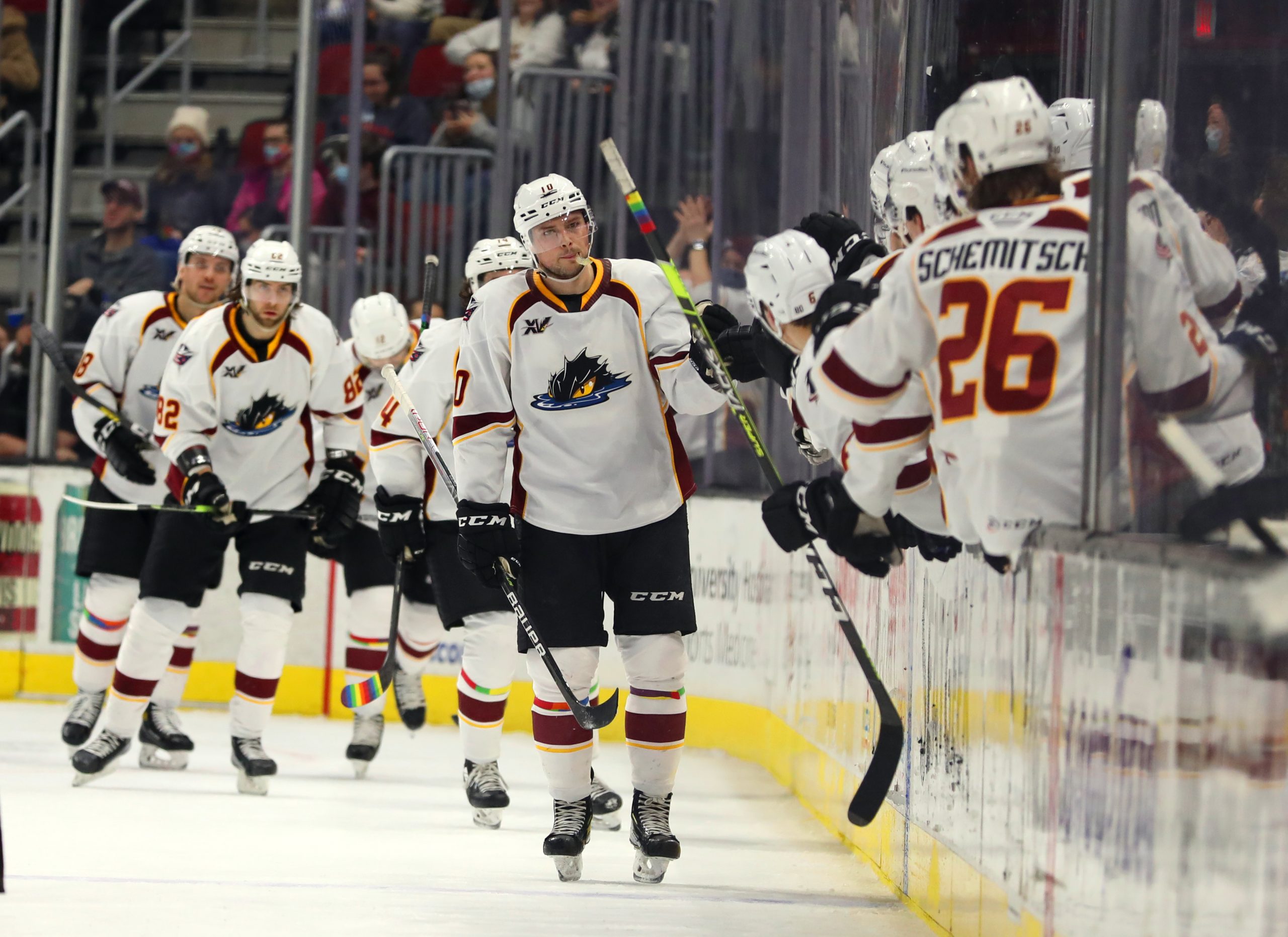 Hope on Horizon for Struggling Monsters

Hope on Horizon for Struggling Monsters

CLEVELAND – Massive roster turnover. A goalie carousel that has gone entirely off track. Next to no goal scoring. The Cleveland Monsters looked to have a one-way ticket to the bottom of the American Hockey League with no return trip in sight.

After all, there is little to hope about when you are 5-13-3-0 since the beginning of 2022. But, hope is starting to shine over Cleveland with signs that the Monsters may be coming back to life.

What Went Wrong for Cleveland

Troubles for the Cleveland Monsters squad started back in December, where they only won a single game all month. Plus, they also saw multiple games postponed due to COVID-19 protocols. Reports indicated that as many as 17 skaters at one point were out on protocols.

After a 9-3-3-3 start through November 27, this left many scratching their heads, wondering where it all went wrong.

This was supposed to be a Monsters team that was supposed to contend for the upper seeds of the North Division playoffs. After all, this was the same team that barely missed out on taking the top spot of the Central Division in a shortened 2020-21 season.

Some of the struggles for the Monsters weren’t unique to their roster. Many teams had to deal with callups and a myriad of roster changes. At one point, there were over 1,300 AHL transactions in less than a month.

Thanks to COVID-19 protocols, the return of the NHL taxi squad, and the inevitable injuries that come every season, AHL rosters struggled to field a full roster at times.

Since Dec. 26, there have been approximately 1,350 AHL player transactions (an average of 43 per team).#AHL

We can’t point to that as the singular reason for the Monsters’ fall since multiple teams (looking at you, Chicago, Utica, Stockton, and Ontario) flourished despite it.

Perhaps a young and somewhat inexperienced coaching squad contributed to some of the mismanagement and stress of the situation.

Cleveland Monsters head coach Mike Eaves has been recuperating from a non-COVID medical issue all season, which has kept him off the bench. Though, at times, he’s been seen watching from high above the ice in a suite along with Columbus Blue Jackets goaltending development coach Brad Thiessen.

That leaves assistant coaches Trent Vogelhuber and Mark Letestu to make in-game decisions. Letestu was initially set to start the season in a completely different role with the Columbus Blue Jackets. Though, on September 13, 2021, the Blue Jackets announced the firing of assistant coach Sylvain Lefebvre.

With the clock quickly ticking down on the season, the Blue Jackets looked internally to plug the hole. First, Monsters assistant coach Steve McCarthy got the promotion up top. Then, they catapulted Letestu into the Monsters assistant coaching role just minutes before he manned the bench for a prospect’s tournament game in Traverse City, MI.

All of this all culminated in a downfall for the ages.

But not all hope is lost.

How the Monsters Can Crawl Back

Despite the massive roster turnover, we are starting to see a reawakening of the Monsters. This looks more like the team we saw at the beginning of the season: good communication, some stability in lines, and excellent chemistry.

When COVID hit this team, they were absolutely bodied. It rocked them and sent them tumbling to the bottom of the North.

Then, on February 7, 2022, the Blue Jackets once again came calling for reinforcements.

With top scorers Brendan Gaunce and Trey Fix-Wolansky called up to the big club, it was time for the next men up. In the Monsters Musings podcast, we pointed at Carson Meyer and Tyler Angle as players that needed to fill those holes. After all, Angle and Meyer were among the team leaders in scoring last season and the natural successors.

Luckily, they took the opportunity with both hands and broke out, leading the team to their two most recent victories.

Then when Fix-Wolansky was sent back to the Monsters on February 19, that’s when this group really started to come together.

Carson Meyer gets off on a breakaway while Trey Fix-Wolansky fires up the rockets and catches up with the rush. The pair connect for the 2-2 equalizer.

Though, to be fair, every game since a 3-2 OT loss against the Chicago Wolves on February 8 has seemed in reach. Sometimes, a bounce or an errant puck was the only difference.

Either way, Cleveland’s been crawling back and making the games competitive. It’s a far cry from the end of January, where they outscored 20-6 over five games. In February, the Monsters are still being outscored 30-20. However, they’ve picked up two wins and two OT losses. In total, they’ve gotten points in four of their last six matches.

And that includes points in games against teams like the Grand Rapids Griffins, Charlotte Checkers, and consistent league leader Utica Comets.

That equals confidence, especially when depth scoring is coming from guys like Justin Scott, Thomas Schemitsch, and Scott Harrington at crucial moments.

Plus, Cam Johnson seems to be hitting a nice stride, which will be essential while Jean-Francois Berube and Jet Greaves are in net up in Columbus.

The big question right now is, “Can the Monsters sustain this and get better?”

Quite possibly. This squad has the talent, drive, and mix of experience and youthful energy to make it happen. Plus, assuming that Gaunce and at least one of the goalies come back in the next couple of weeks, that will bolster this roster.

Right now, two lines are driving this squad. First, it’s the top line of Fix-Wolansky, Angle, and Meyer. Then, after that, the third line consisting of Tristan Mullin, Scott, and Cole Cassels has been so consistent. That third line dictates the pace of play while eating up important minutes.

Since the arrival of Robbie Payne on a tryout contract, that second line is starting to generate some chances and show signs of life. It’s so essential to get Tyler Sikura going, and Payne may be the secret ingredient this line was missing.

Who Stands in Their Way

The Monsters only need to crawl up to the number five slot in an expanded playoff year to get a playoff berth. Right now, that spot’s being held by the Belleville Senators. They won their last game and are 7-3-0-0 in their previous ten games. Overall, they have a 0.524 points percentage.

Belleville has been hanging around the bottom of the North division all season. But, at the same time, they’ve also been the proverbial thorn in Cleveland’s side. Remember the 6-2 and 3-2 losses back in November?

Directly above Cleveland is the Syracuse Crunch, with a one-game losing streak. In their last 10, they are 5-4-1-0 with a 0.511 points percentage.

Meanwhile, the Monsters sit with a 0.433 points percentage.

Getting above the Crunch and Senators isn’t out of the question. In fact, it’s absolutely doable. However, you can’t count on help in this league. It’s just far too competitive.

So, how can the Monsters get to the playoffs? Simply, they have to find the win column fast and consistently. It’s up to them to help themselves.

We’ve seen meteoric rises out of the standings basements before. So, why couldn’t it be the Monsters this time?

After all, we’re only talking about two standings points between now and April 30. Though, there can be no passengers on this train to get it to the final destination.