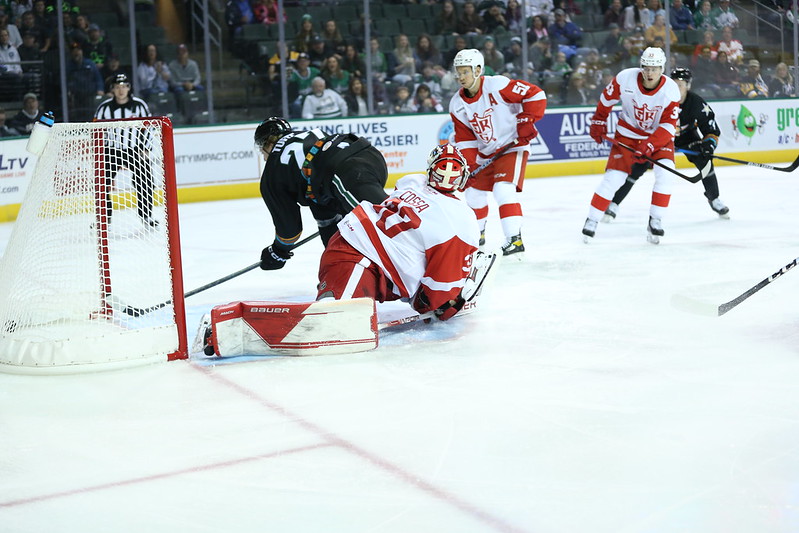 CEDAR PARK, Tex. – After a quick road trip, the Texas Stars returned to the H-E-B Center Saturday night for the first of two weekend matchups against Central Division rival Grand Rapids Griffins. Thanks to a rip-roaring start, the Stars jumped on the Griffins and didn’t let up en route to a 5-2 win on home ice.

Remember last season, when the Stars had trouble scoring three goals a game? Well, those days are long gone.

It took less than three minutes for the Stars to jump out in front. With his first goal of the season, Riley Tufte benefited from an extended shift in the offensive zone that left him with the entire left half of the ice wide open. A curl and drag later and Tufte tucks it in.

A couple minutes later Riley Barber tallied his fifth of the season on a neat centering pass by Mavrik Bourque from behind the net. Before I could send out my goal notification tweet, Thomas Harley fired a wicked wrister from the left circle to make it 3-0 just 5:20 into the game.

Grand Rapids failed to answer and instead found themselves shorthanded due to a pair of penalties by Kyle Criscuolo. On the latter of the two power plays, the Stars capitalized. Ben Gleason netted his second of the season after dangling around Simon Edvinsson and firing high on Sebastian Cossa. The Stars carried that 4-0 lead into the intermission.

If going down by four in the first period doesn’t wake a team up, perhaps the intermission speech does. Grand Rapids came out hot in the second, and after an early penalty from Curtis McKenzie, cut the lead to three. It was former Star Joel L’Esperance swatting home the rebound just 47 seconds in.

A continued press from Grand Rapids proved ineffective, as the Stars stood strong and restored their three-goal lead before the period was out. It was Fredrik Olofsson scoring his first goal in North America off a sweet backhand pass from Jacob Peterson.

Clinging to a 5-2 lead, the Stars went into shutdown mode for the final 20 minutes. A clinic in puck management and strong defense made this an easy close-out for the Stars as they would improve to 2-1-0 on home ice this season.

What a start! The Stars are flexing that offensive might that was absent for so much of last season. Three goals in the first five minutes plus were enough to secure a big win at home. Now let’s put the start out of mind for a moment. The Stars got on the scoresheet five times and each of their goals came from a different skater. That’s the kind of stat sheet the coaching staff loves to read. If you’re the Stars, you have to be ecstatic with the effort on Saturday night.

Looking ahead, what do the Stars need to do to keep their winning ways? For starters, you won’t see a start like that very often so put that away. The Stars will be looking to build off their shutdown style third period and the spread-out scoring. Being able to control the pace of play is crucial to their success, and when the puck isn’t going in, it’s even more critical. Look for an aggressive team out of the gates Sunday evening when the Stars aim for their first series sweep of the season.