CINCINNATI — What a difference 24 hours makes. Game four of the Central Division Semifinals on Wednesday was best described as anemic and lethargic for the Cincinnati Cyclones. Then, on Thursday, they put together an almost complete effort highlighted by a 42-save shutout for goaltender Michael Houser, sealing a 2-0 victory over the visiting Toledo Walleye. That puts Toledo on the brink of elimination while the upstart Cyclones put on quite the show in their last home game of the series.

As the seconds ticked down until puck drop, Cincinnati honored their athletic trainer, Tim Murray, as he was named the recipient of the 2021-22 ECHL Athletic Trainer of the Year Award.

But as the game began, it was soon clear this would 100% be Houser’s show and Cincinnati’s game to lose. They quickly started racking up shots and hits, coming out with rockets on both their sticks and skates.

Toledo responded in kind. After all, they were the regular-season champions, so no period against them would be easy for Cincinnati.

The heat turned up as the period wore on—checks and battles along the boards, scrums after seemingly every whistle, and plenty of penalties. In fact, by the end of this game, there were 30 PIM awarded. Only 12 of those were handed to Toledo. 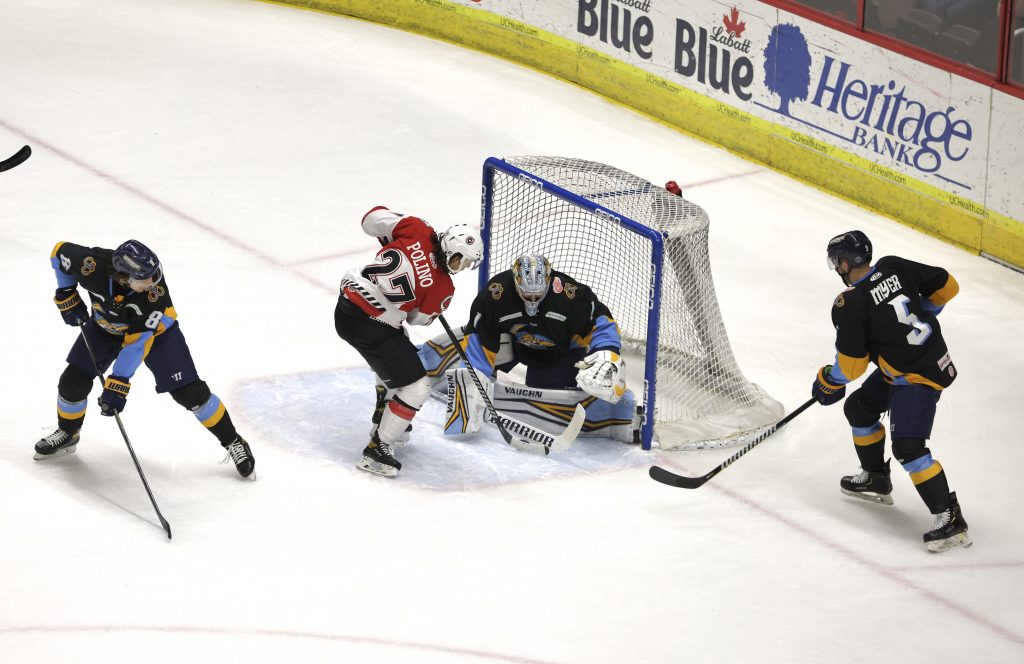 The strong penalty kill play from the Cyclones started right at the beginning of the game. They were wise with their sticks, highlighted by a denied shot off a well-placed Matthew Cairns blade just a few feet from Houser to help out the scrambling goaltender.

Then, Graeme Brown used his body to block multiple shots, once again giving his goalie the time and space to work.

With every hit and every blocked shot, the chip on the Cyclones’ shoulder just grew. That energized the crowd at the Heritage Bank Center. Unsurprisingly, that energy was sent right back to the team, only to be unleashed on the ice.

Toledo goaltender Billy Christopoulos had no shortage of highlight saves as Cincinnati pelted him in the first. There were so many chances that either went wide or were turned away on a long rebound. Lukas Craggs had a great first period, coming up with multiple quality chances for his Cyclones.

Here's just the latest in a long stream of "how did that puck stay out" for the Cyclones this period.

When the horn sounded on the first period, Cincinnati had a sizeable shot advantage: 14-8. Though, whispers filled the arena. For the first time this series, there was a scoreless first period on the ice. Would either goaltender give up a goal? Could Cincinnati maintain its intensity?

The answer to both questions? “Yes.”

However, it was a much slower start to the second. Instead of a rocket launch, it was a slow rev up that would end in fireworks.

Cincinnati got the scoring chances started off early with three quick succession shots from just as many angles. Despite an overall lower goal shot count, they truly made Christpoulos work on Thursday evening.

The teams traded high-danger scoring chances more quickly than most of us could even process the action on the ice. A constant wave of bated breath and cheers overtook the crowd. This soon delved into a sustained “boo” for the officials. First off, an icing call in Cincinnati’s zone, despite Zack Andrusiak clearly having a few strides on both Walleye skaters. Then, Brown was called for a check to the head, which set off the crowd even more.

Late in the penalty kill, Toledo looked primed to strike. Houser was down and sprawling. The Walleye were swarming the crease. In the middle of all of this? Forward Louie Caporusso. Somehow, he gained possession of the puck and swiftly shot it safely away, just short of the neutral zone.

That was enough time for Houser to reset and kill the penalty.

On the flip side, Toledo’s John Albert found himself between Christopoulos and a blazing Dajon Mingo shot during a Conlan Keenan high sticking penalty. He sacrificed the body, helping to keep this one locked at zero.

Then, finally, there was a release for all of the building tension in the arena. Toledo’s Max Balinson streaked into the Toledo zone, shooting the puck towards the net and his teammates Matt McLeod and Lincoln Griffin. They both scrambled, with Griffin eventually getting the puck past the goal crease.

After quite a lengthy review, which was requested by Toledo for a possible kicking motion, it was ruled a good goal.

Max Balinson streaks into the Toledo zone and gets the puck to Matt McLeod and Lincoln Griffin. A scramble for the puck ends up in the back of the net.

This ruling only emboldened and angered the Walleye. You could see red in their eyes and the scowl on their faces. This came to a head as the horn blew on the middle stanza. Dominic Franco and Chris Martenet come together, coming just short of an all-out fight. Meanwhile, Walleye captain TJ Hensick had a lengthy conversation with the officials, which was met with more boos from the crowd.

Toledo found themselves trailing 1-0 but had narrowed the deficit on the shot clock 27-23.

Toledo had plenty of chances to both equalize and get ahead in the third period. In total, Cincinnati was called for six separate penalties, compared to Toledo’s two.

But again, blocked shots and an outstanding performance by Houser stood in their way. When you hear about an athlete being dialed in, you know nothing will rattle them. That was Houser this evening.

Toledo, meanwhile, was still able to maintain constant pressure, making Cincinnati’s job even harder. Then, a potentially crushing blow: Cairns crumbled to the ice in discomfort. Even when reviewing the play, it wasn’t quite clear what happened. One second he was on his feet, then he was down on the ice.

In time, he was helped to his feet and off the ice.

Down a skater, the Cyclone’s shot lead quickly vanished as Toledo quickly racked up chance after chance. Despite that, Houser and his defense were not deterred or rattled.

The Cyclones took the critical 2-0 lead with 9:17 left. Andrusiak tallied his series-leading fourth goal after Justin Vaive battled along the boards, freeing up the puck in the process. Andrusiak was laying in wait, sending a one-timer over the Walleye goalie’s right shoulder.

Zack Andrusiak in the right place at the right time for the @CincyCyclones as he collects a shot from Justin Vaive and finds a clear lane to the back of the net.

That's his fourth of the playoffs.

Toledo was given a goal opportunity almost gift-wrapped to them in the form of a lengthy five-on-three power play for 1:35. With both Mingo and Vaive off in the box, Cincinnati needed someone to step up.

Houser rose to the occasion once again.

With bodies littering his crease, Houser tripped, falling to the ice. Brandon Hawkins saw the chaos, getting off a shot. Soon after, Patrick Curry also managed to shoot from down low, which was expertly saved by Houser’s glove.

This has to be one of the most chaotic save sequences I have ever seen.

With bodies in the crease, somehow, someway, Michael Houser is able to make this save while on a 5-on-3 PK.

What a shot by Brandon Hawkins and he cannot believe that this one didn't convert.

Then, Vaive almost immediately found himself back in the box. Against one of the league’s most talented power-play units, Cincinnati was in a precarious situation. But, the return of Cairns energized the Cyclones, who were able to kill off all seven power plays this night.

The minutes turned to seconds and then the horn sounded as the crowd of 1,985 saluted their team.

Cincinnati head coach Jason Payne shared him message and the team’s attitude to close out this series:

“The job’s not done. We asked for our guys to come out and compete, bring a whole different mindset, like the mindset we had in the first three games, and they did that tonight. We talked as a team about what they needed to do and they all executed. We put the onus on them and they did what they had to do. It’s the best of three like we talked about and here we are. We took the first one like we needed to do and we’ll see what happens when we get up there [to Toledo].”

Toledo head coach Watson had this to say about the outstanding goaltending performance:

“He [Houser]  was the difference. He was an elite goaltender tonight. We’ve talked about both goaltenders being elite at this level, and you saw that tonight. I thought Billy was excellent, too. He kept us in that game in the first period. Then Houser kept them in it the rest of the way.”

Payne had similar praise for his goaltender:

“The performance he put on out there tonight was unbelievable. Tonight, he was the dialed-in Houser. It’s the Houser we all know and expect. This is the Houser that has been in the name of the mouths of many hockey fans around the world. He is a guy that is going to give you an opportunity to win. He’s the backbone of our team. We played hard and well in front of him as well.” 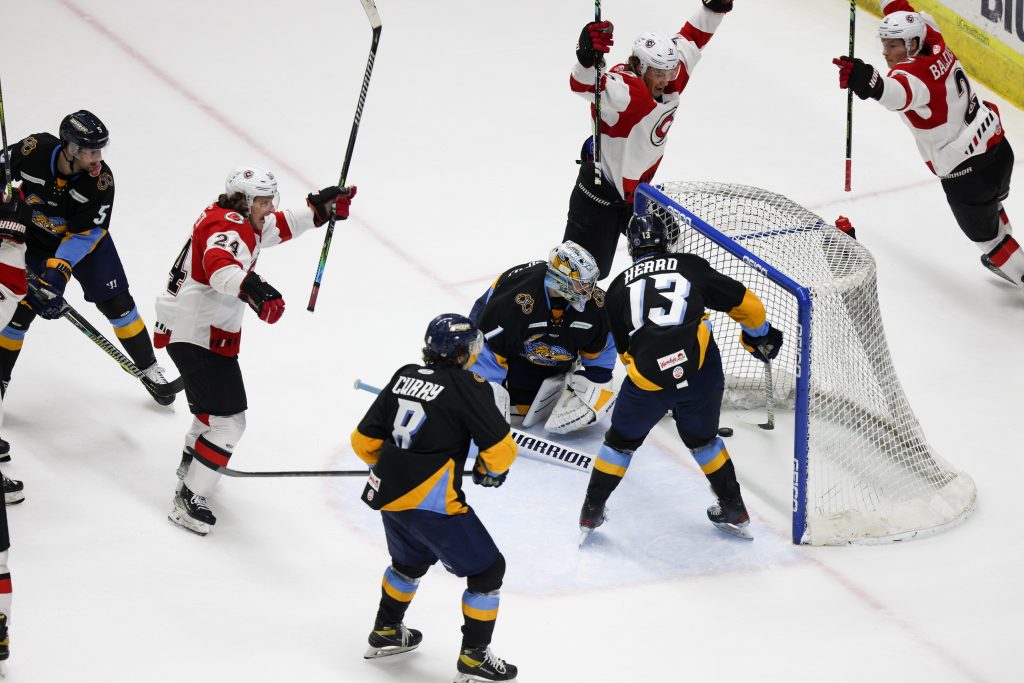 The Cincinnati Cyclones celebrate after going up 1-0 over the Toledo Walleye at 17:13 of the 2nd period. Photo credit: Hector Urcia / Field Pass Hockey

Houser was asked about his thoughts on the Cyclones’ penalty-killing units and how they helped him in his pursuit of the shutout and victory:

“That was probably the most blocks that I’ve seen us have on the PK. I thought our PK was really good tonight. When we just keep them to the box on the outside, we don’t give up too many seam passes across the box. That makes it easier on me and makes it a little more predictable.”

The series now heads back to Toledo for a must-win game six on Saturday at the Huntington Center at 7:35 pm.