SEATTLE – Almost a year after the AHL Board of Governors officially approved a franchise in Palm Springs, the Seattle Kraken have had to change their initial AHL affiliate arena plan in California.

CALLING AN AUDIBLE IN SOUTHERN CALIFORNIA

The OVG have done a hard pivot on the originally planned 10,000-seat, 300,000-square-foot arena in coordination with the Agua Caliente Band of Cahuilla Indians in the midst of Palm Springs proper. The construction of the proposed arena didn’t even get off the ground — literally — as the February groundbreaking was delayed due to “extenuating circumstances”. Parking issues, public safety concerns, and the COVID-19 pandemic brought any further plans of progress to a halt.

“After more than a year of good-faith negotiations we were unable to finalize an agreement with the Agua Caliente tribal leaders for OVG to lease, develop and operate the privately funded arena,” said Tim Leiweke, CEO of Oak View Group. “We appreciate the ongoing support and encouragement from the community and are very pleased to be partnering with the Berger Foundation who share our vision for creating a world-class venue for the Coachella Valley and what will be one of the most premier music and professional sports arenas in the world.” 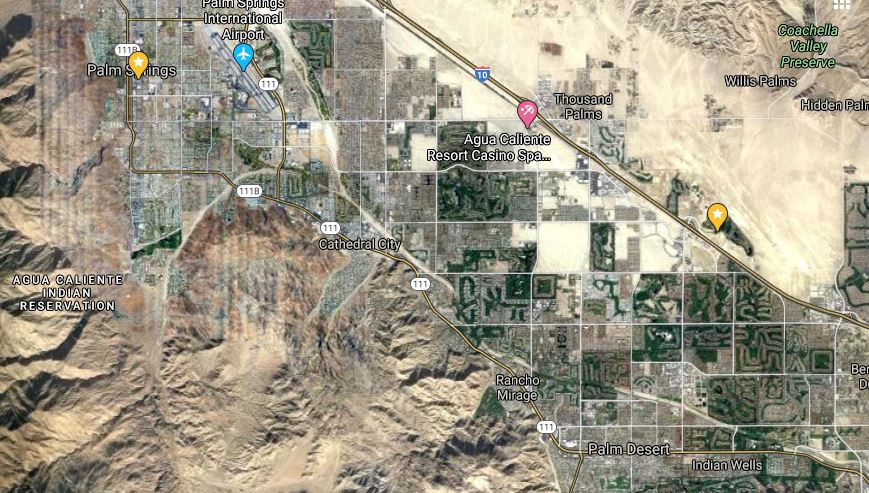 The original site of the new AHL Palm Springs’ arena (starred yellow marker on the left) was in the heart of downtown Palm Springs. The new site announced on Wednesday (starred yellow marker on the right) is about a 15-mile drive from the original property, situated north of the city of Palm Desert and south of the Classic Club Golf Course off Interstate 10 at the Cook Street exit. Photo Credit: Google Maps

WHERE WILL THE PROSPECTS PLAY?

The situation looked dire for the Seattle Kraken and their AHL affiliate’s new team & arena (and their future players, for that matter). When the aforementioned news of multiple roadblocks for the original arena site broke this past summer, Seattle found themselves many months behind their scheduled groundbreaking in Palm Springs. Back-up plans were being floated around, with everything from the AHL squad sharing Seattle’s Climate Pledge Arena to sharing an  affiliate from amongst the 31 existing AHL franchises. Now, with the construction completion date bumped up to 2022, those options could still be on the table.

“We’re excited the deal is done and Palm Springs will be our home for the AHL franchise,” said Seattle general manager Ron Francis. “We will be doing everything we need to do on the development front, from top to bottom, for the good of the organization. We will be engaged and in communication with every player in our organization.”

NOW A PLAN COMES TOGETHER

The idea of an indoor arena just north of Interstate 10 is nothing new. The Berger Foundation, who owns Classic Club and the remaining acreage south of said golf course, had a proposal from Coachella Sports & Entertainment Authority to build a 10,000-seat arena on the site in 2018. And, even though plans in Palm Springs with the Agua Caliente tribe called for all the same things — suites & hospitality clubs in the main arena, training facilities, and a community gathering space — that the new location north of Palm Desert does, there is now 43 acres to work with as opposed to 16 acres in a space-limited downtown Palm Springs.

Greg Rubino, general manager at the Classic Club, is extremely optimistic about an AHL-level arena planned just south of the golf course.

“I am excited. Since 2003, the foundation has always planned on some development out there like this. To have the ability to find world-class partners like they have now, I’m not only excited for Classic Club but the entire area.

“There is incredible synergy with having the stadium be on site and all of the other future development that is yet to be released…It will make everything better at the end of the day.”

WORKING OUT FOR THE BEST

Even though there is a new arena site for Seattle’s AHL franchise in Southern California, the amenities for the structure will remain the same, if not better, than the original plan. The arena will still host musical acts and family-oriented entertainment, but now with a more central location across the Coachella Valley’s nine major cities: Cathedral City, Coachella, Desert Hot Springs, Indian Wells, Indio, Indian Wells, Palm Springs, Palm Desert, and Rancho Mirage.

The main facility will still be around 300,000-square-feet, and as previously mentioned, the construction of the team’s training facility and community gathering space will still happen. There will also be room for growth, as plans of rinks for youth hockey, figure skating, adult skating, and more are in the works as well.

The project is slated for completion in the fourth quarter of 2022, just in time for AHL Palm Springs to lace up & play for the 2022-23 regular season.

C.C. Hawkley serves as the AHL Editor for The Sin Bin, co-hosting the site’s flagship AHL podcast In The Corners with Sean O’Brien. He also covers the AHL’s Colorado Eagles as a written correspondent, co-hosting the Colorado Eagles: Tape to Tape Podcast alongside Scott MacDonald. Follow him on Twitter: @SinBinEagles

Don’t forget to also follow The Sin Bin on social media via Facebook and Twitter for all additional AHL, ECHL, and SPHL minor league hockey coverage!