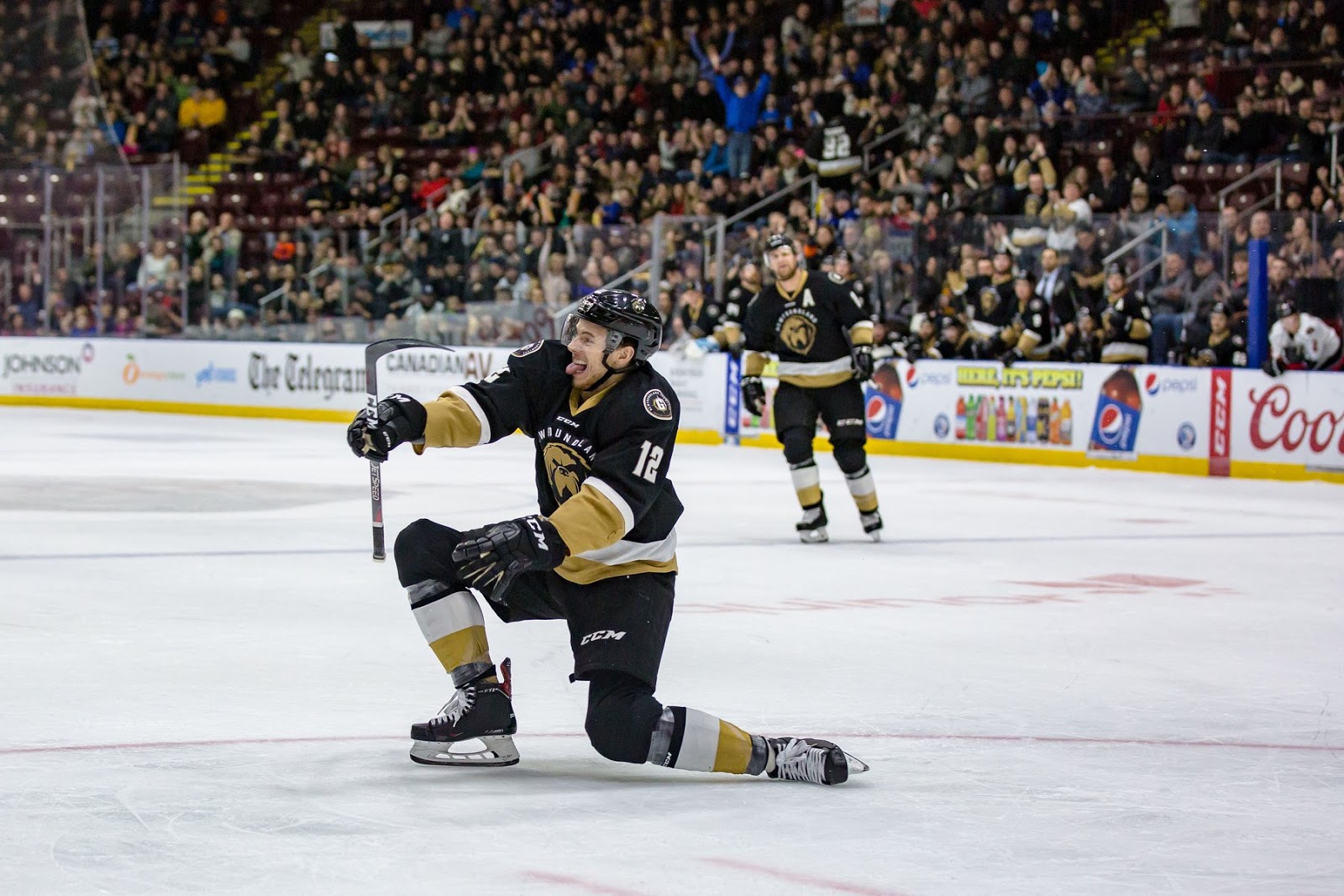 ST. JOHN’S, NL – Back in September, I spoke with Scott Pooley, a forward in the Toronto Maple Leafs system. The 26-year-old has been with the organization since the end of the 2017-18 season. He split last season between the Toronto Marlies and the Newfoundland Growlers, where he recorded 34 points in 47 games before the cancellation of both campaigns.

The 6’2″, 201-pound right-shot winger was a member of the Kelly Cup-winning Growlers squad where he helped propel the team to victory with 17 points, appearing in all of the team’s 23 games.

Aiden Foley: Thanks for joining me tonight, Scott. How have you managed the coronavirus pandemic since the cancellation of professional sports in March?

Scott Pooley: It’s obviously been new for everyone. New protocols and guidelines. I’ve been fortunate enough to be able to train since June and we’ve gotten into a good routine on the ice now, too. 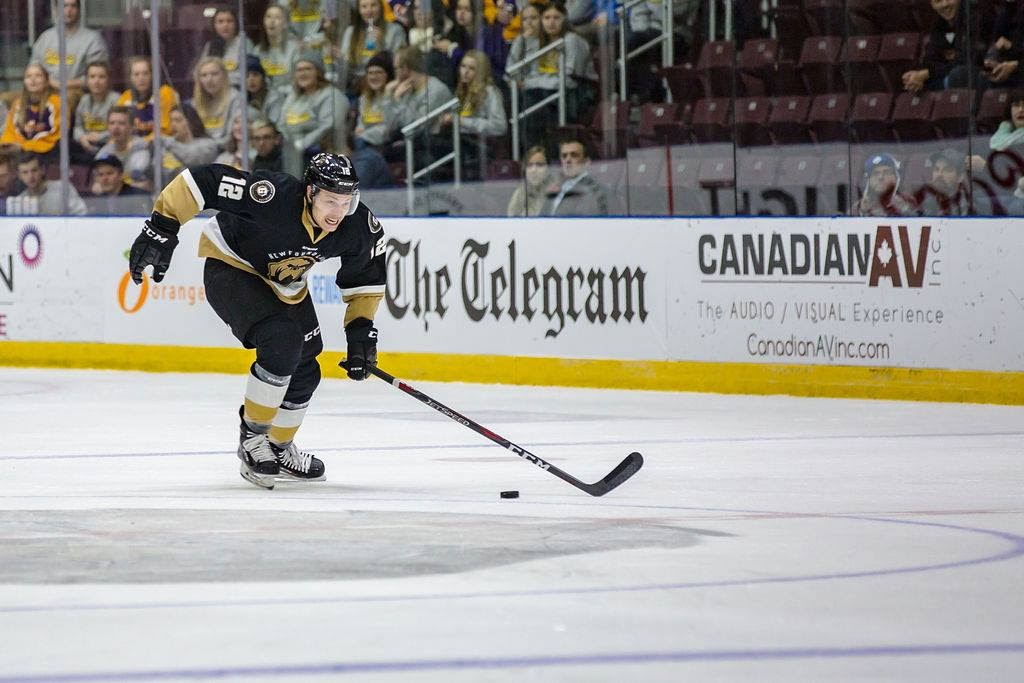 AF: We were seeing tremendous play from you throughout the season, both here in Newfoundland and up with AHL Toronto. As you are signed to a contract for next season with the organization, is there anything you would like to accomplish next season, whether it be with the Growlers or the Marlies?

SP: I think personally I just want to take that “next step” and show that I can be an NHL player. That’s where I ultimately want to be. And I think this is a big year towards getting me there. 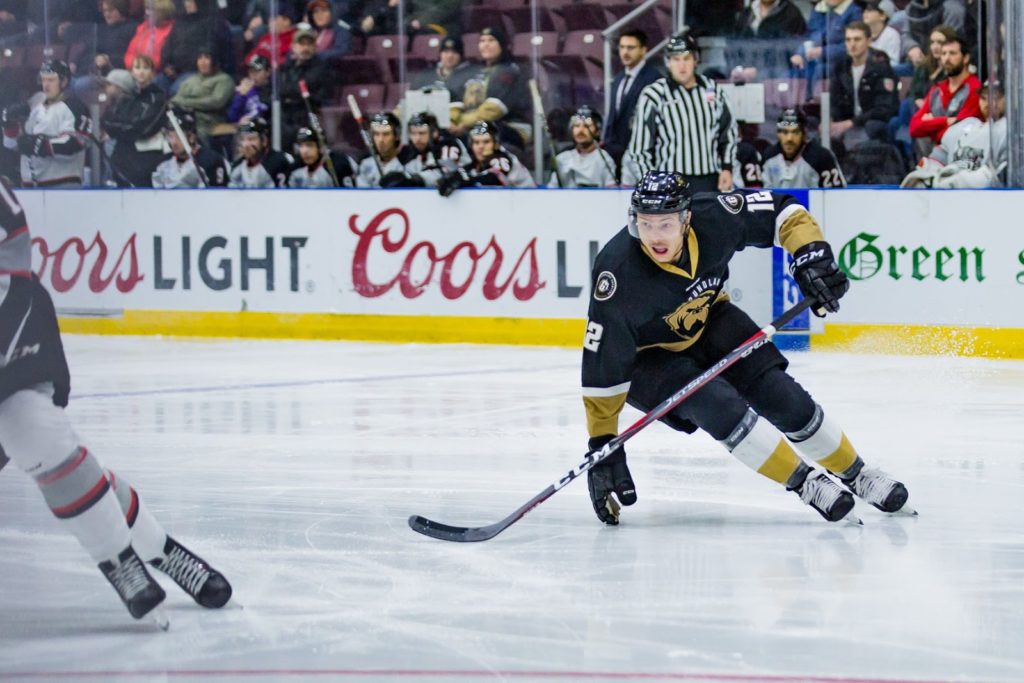 AF: You were obviously a huge part of the massive Kelly Cup win in the Growlers’ inaugural season, and you scored a big goal in overtime to put the team up two games to nothing before heading on the road to Toledo in the finals. How did it feel to score such an important goal that helped lead the team to the championship victory?

SP: Yeah, it’s one of those I’ll really remember forever. It was an unbelievable play by Hudson [Elynuik] to keep the puck in and get it over to me. Just an awesome feeling to help the team win and get us a 2-0 lead in the series. 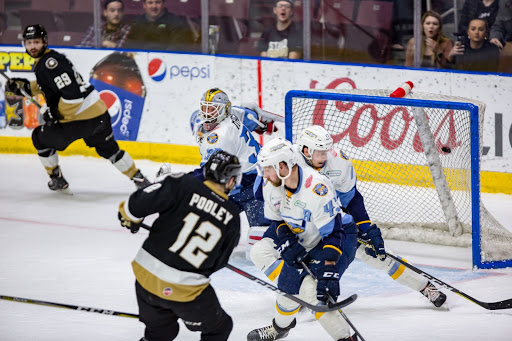 AF: We’ll bring this over to your junior career. You spent a year in the AJHL with the Fort McMurray Oil Barons. As I’m sure you’re aware, the town has a high percentage of its population with a Newfoundland background. Did this sort of give you an idea of what Newfoundland is and who Newfoundlanders are?

SP: Yes, I became very close with the Fahey’s (Krista and Keith) who were from Newfoundland. They were a billet family and I spend a lot of time at their home as they hosted another American player. Being totally honest, it took me a little to understand their accent, but I got it eventually. They were the best people and when I got to Newfoundland it was no different from everyone I met. 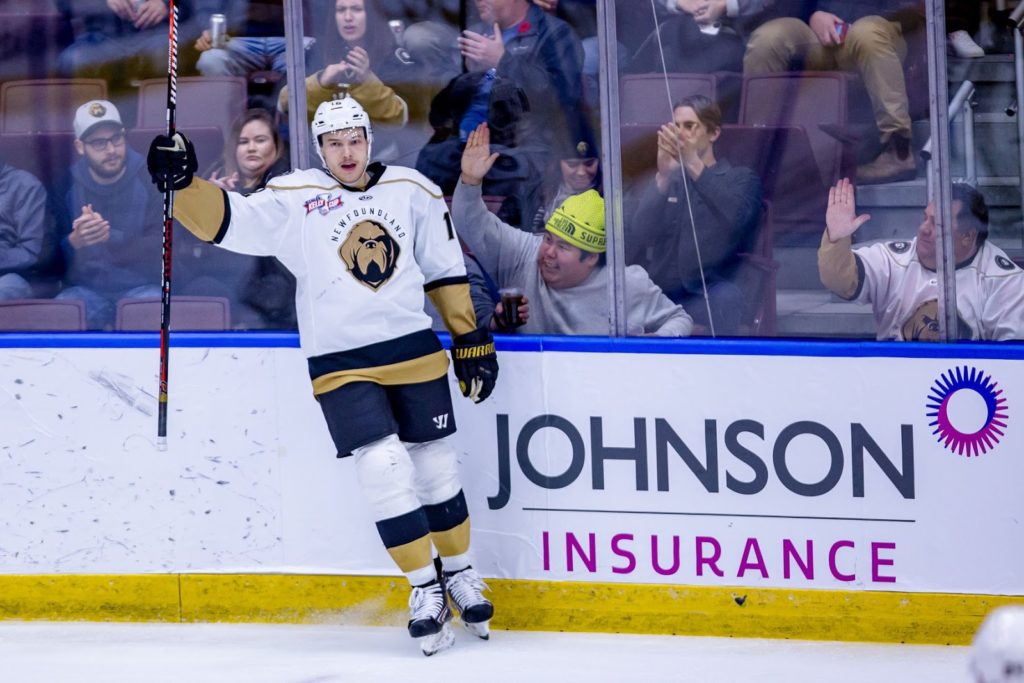 AF: Speaking of the Newfoundland accent, how confused were you when you were screeched in?

SP: I don’t know if confused is the word that comes to mind, more like shocked. I had no idea what was going on, but loved every second of it. It’s such a cool and unique thing that you can only experience in Newfoundland. And to be able to do it with the guys made it that much better.

AF: That’s great. Even though I’ve lived here for my entire life, part of me wants to do the ceremony, just to see what people from away have to endure, ¨mainlanders¨ as we call them. 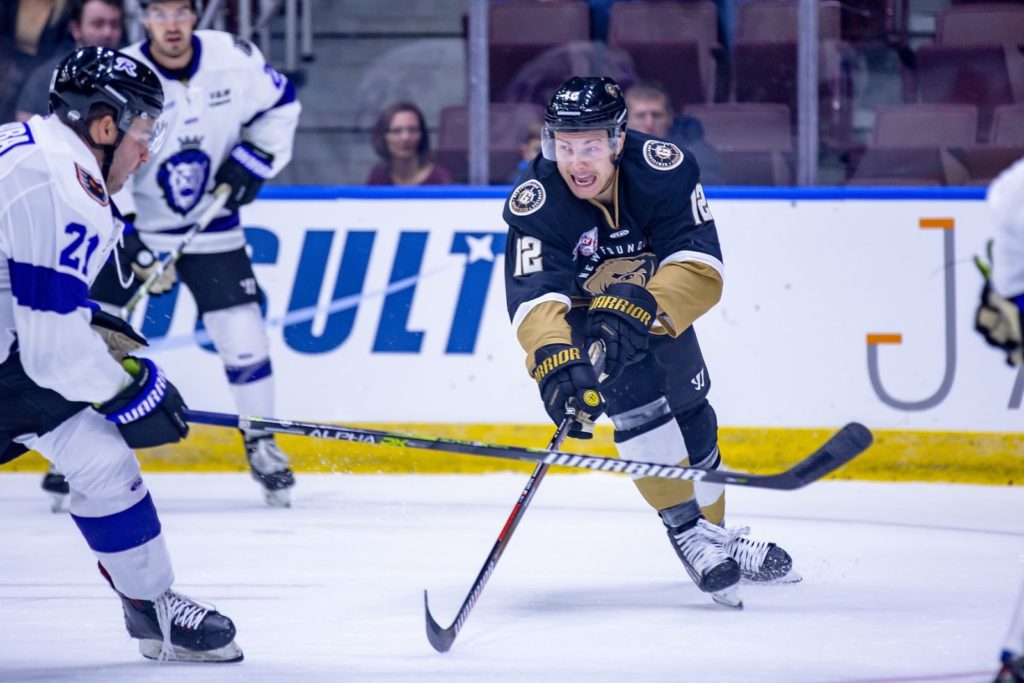 AF: Okay, so your father, Paul was also a hockey player, accomplishing the ultimate goal of reaching the NHL. He has also filled coaching roles for multiple NCAA teams over the span of three decades. Talk about how he shaped you into the player you are today.

SP: Yeah, hockey has formed an awesome bond between my dad and me. It’s been cool to have him to bounce ideas off of and have him help me grow as a player. He obviously has a great mind for the game and knows what it takes. So, I’ve definitely always looked to him any chance I got. 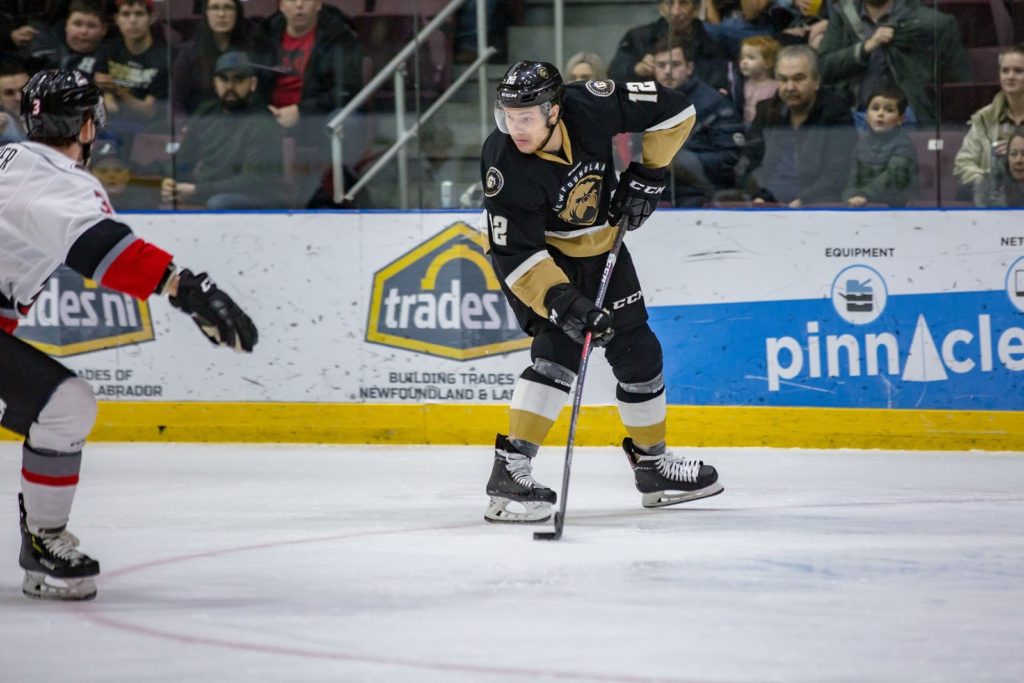 AF: On December 30, 2019, you scored four goals in one game as the Growlers defeated the Worcester Railers by a score of 6-3. For sure it had to be one of your best games. What was it like to outscore your opponent?

SP: I really never thought about it. It was obviously great to have a game like that but it doesn’t happen without my linemates. I think it was Matt Bradley forcing the turnover on the first goal. And Colt with the great pass on the third for a tap in. It was a great win for us coming out of Christmas break.

AF: I believe your last one was a buzzer-beater on an empty net that went to review. 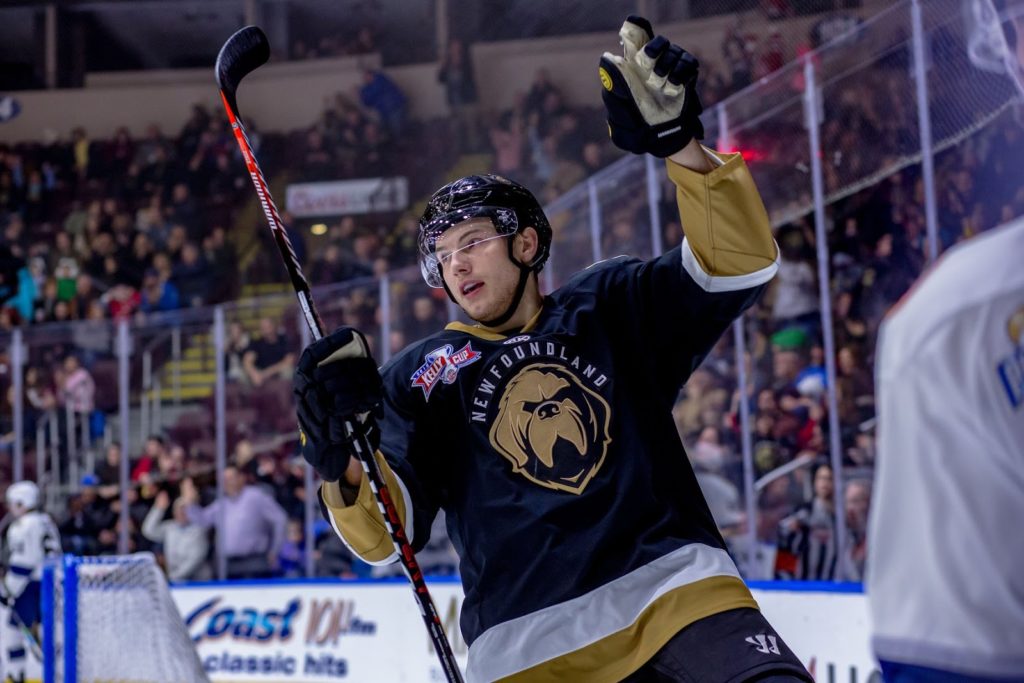 AF: So, you wore the number 12 both at college and with the Growlers. While playing with the Marlies, you donned the number 37, as 12 was occupied by Jesper Lindgren. Is there any significance to either of those numbers?

SP: So, I wore 22 in juniors which is what my dad wore in college. And when I got to school 22 was taken so I took 12. 37 was given to me when I signed with the Marlies and it’s just one I’ve kept since. 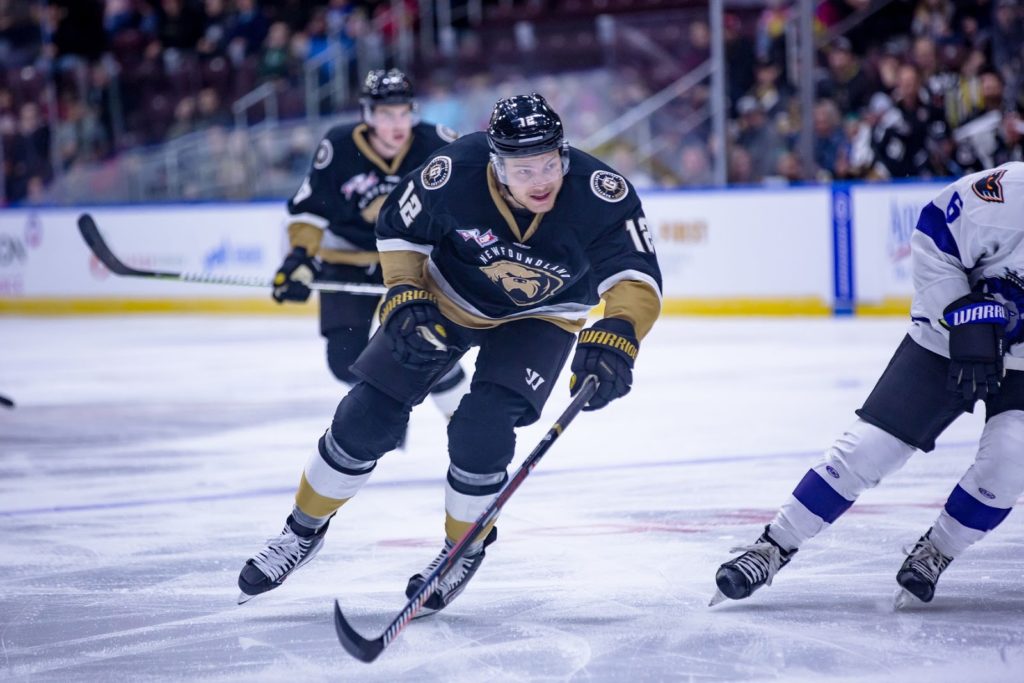 AF: We’ll move away from the hockey side of things now. How was your overall experience at the College of the Holy Cross?

SP: It was awesome. I loved my teammates and my time there. Definitely some lifelong friendships made. 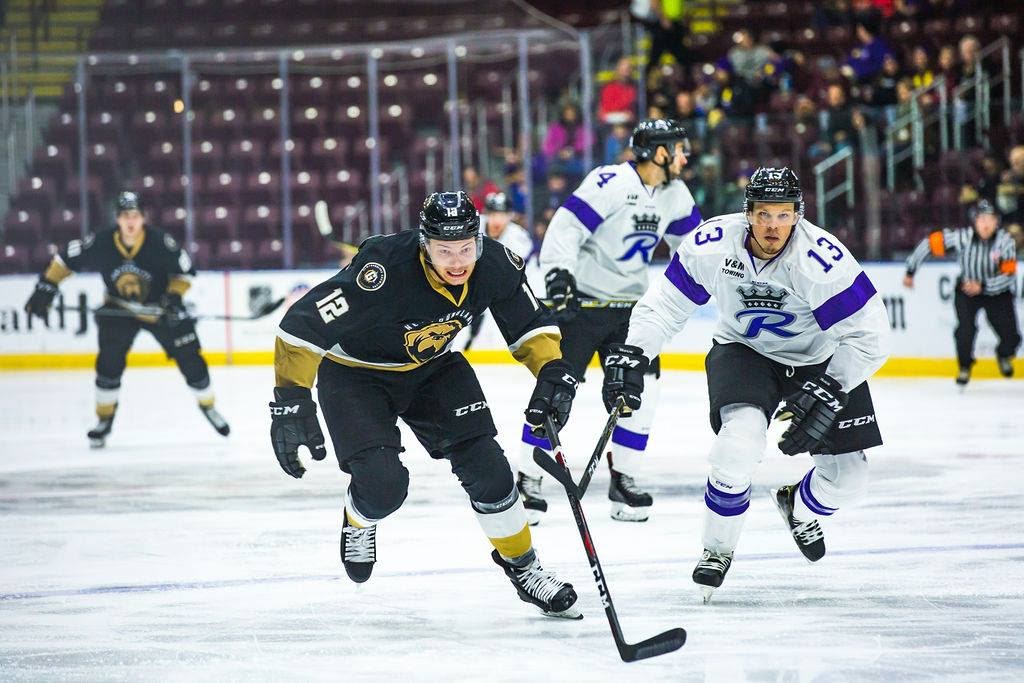 AF: I hear you are an excellent golfer. How long have you played and what is your handicap?

SP: I don’t know if I’d say excellent. But I enjoy golfing. Had some time to work on my game during the summer here. I’ve played since I was little, I love being able to play with buddies and just relax. I’m currently a nine. 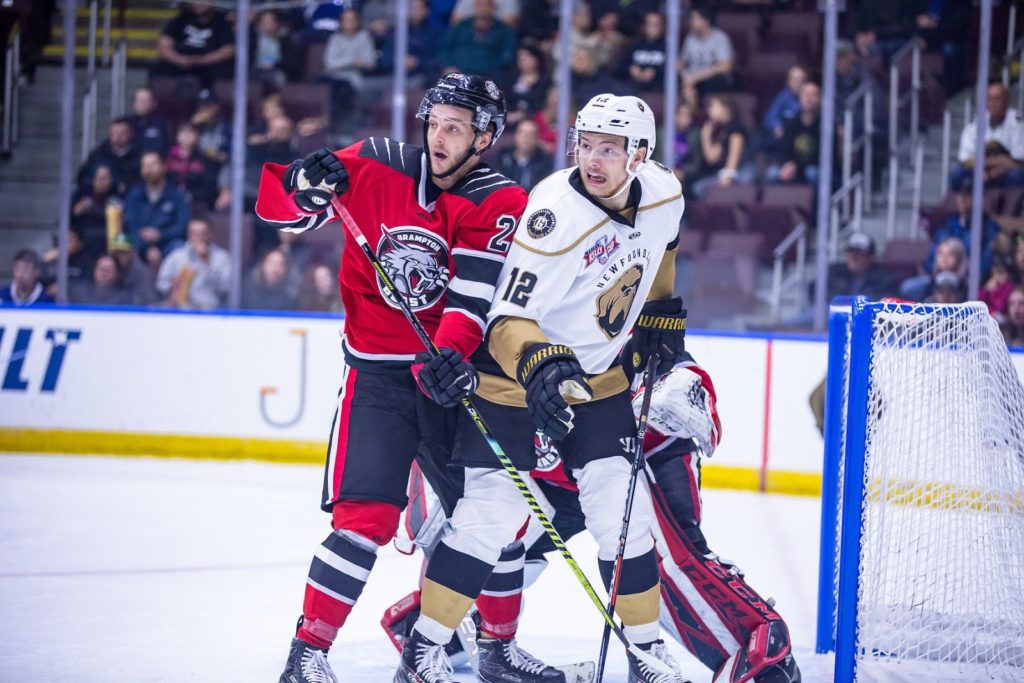 AF: I know they are rare, but since you have such a low handicap, I have to ask: Have you ever gotten a hole-in-one? 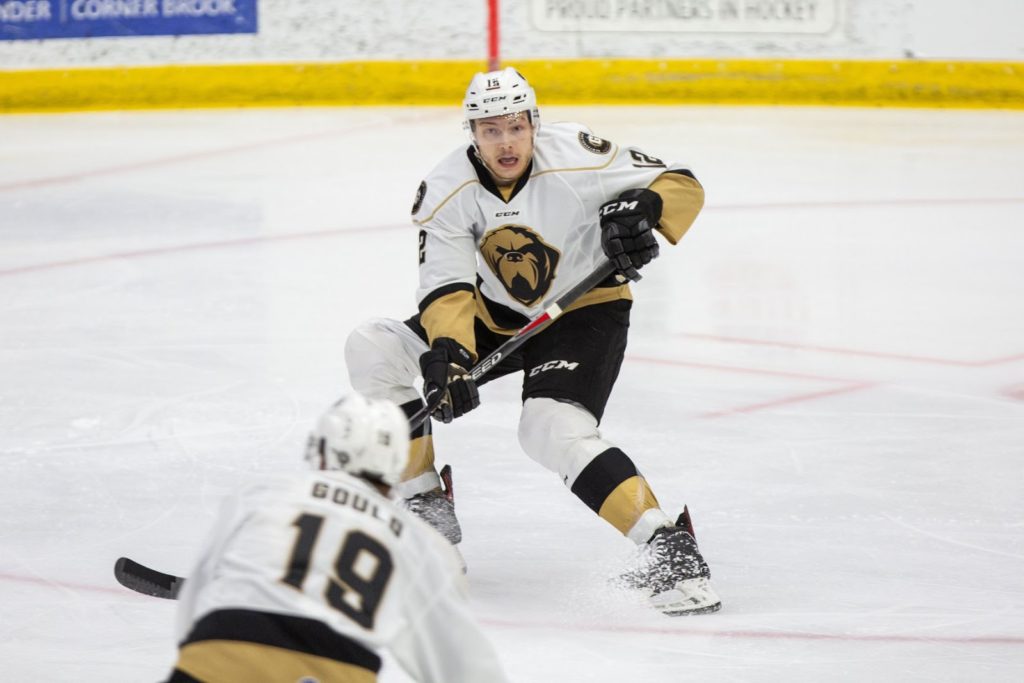 AF: Were you in the province for Snowmageddon?

SP: I wasn’t. I got called up to Toronto about 24 hours before the storm began. 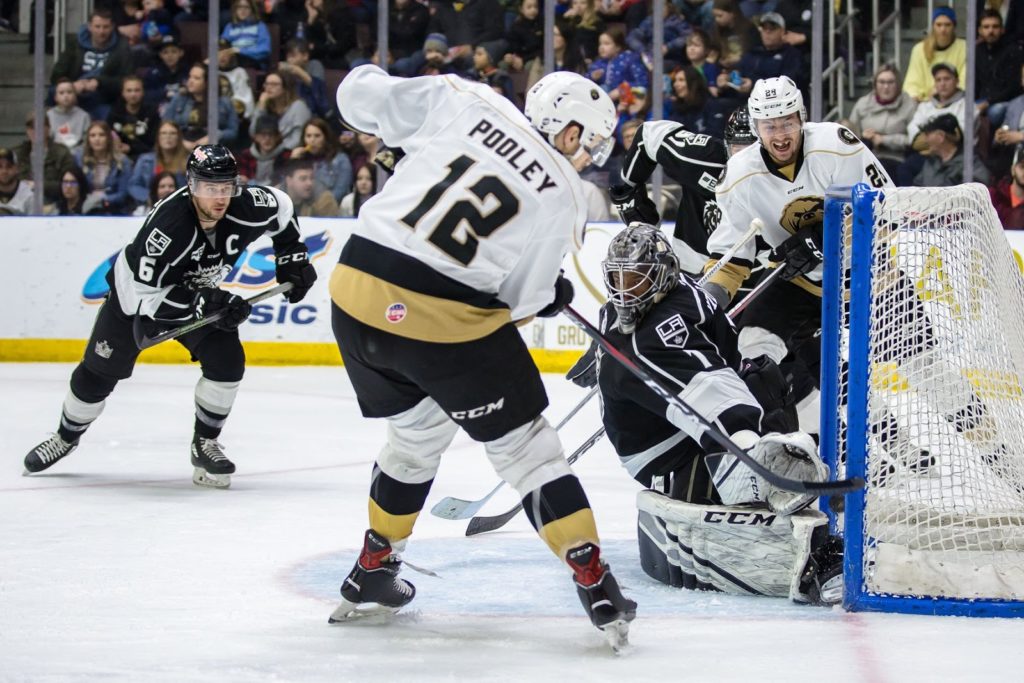 AF: So, we have a question from Adam Michael Craig. He points out that Newfoundland is scheduled to play the Fort Wayne Komets for two games in December. He wants to know if those dates were circled in your calendar to get the chance to not only play in your home state but to play against the team that both your dad and your uncle played for back when the team was in the IHL?

SP: Yeah, it definitely would have been cool. [As] my dad, his brother as well as my other uncle played there, it would definitely a family affair with the Komets. 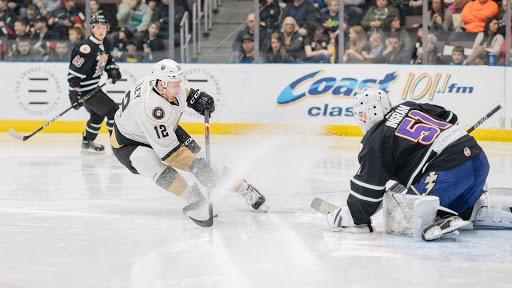 AF: As we all remain optimistic for the season to start up as soon as possible, we wish you nothing but the best as you start another season. Thank you, Scott, stay safe!

SP: Thank you! You as well.

You can follow Scott on Twitter (@SPooley94) and Aiden (@SinBin_Growlers) for the latest news on the Newfoundland Growlers!