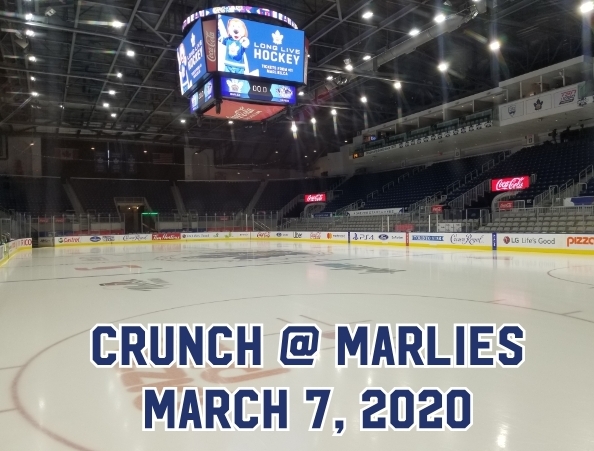 TORONTO – Staying with your own game is ever easy, and doing it when you’re hounded for 60 minutes doesn’t help.

TORONTO – Staying with your own game is ever easy, and doing it when you’re hounded for 60 minutes doesn’t help. For Toronto on Saturday, they were up against a spirited Syracuse squad who had something to prove. The Marlies needed the two points from someone in their division, but they would have to burn through a hungry Crunch to get it.

Though the beginning of the period saw the Marlies unable to control the puck, Teemu Kivihalme scored the games opening goal. With a pass from the returning Timothy Liljegren, Kivihalme opened the five-hole of goalie Spencer Martin to open the scoring. At this point, the Crunch had doubled the Marlies in shots through the first 13 minutes.
After 20, the first star could already be pre-programmed to Joseph Woll, who stopped everything that came his way. The Marlies’ blind passes resulted in poor turnovers and scoring chances for Syracuse. The second period needed a structure from Toronto since Syracuse was right on the money, throwing 14 shots on Woll.
In a period full of aftermarket slashes, hits and brawls, Syracuse solved Woll to tie the game. Gemel Smith’s up-close shot sneaked by Woll, who was visibly upset. Smith’s 22 goals of the season made him an instant target for the Marlies.
As for the second period? The Marlies had five unanswered power plays, many of which were poorly executed. For Toronto, they were outnumbered on all post-whistle brawls, leaving out the defence. Hockey is a game of finding a balance — not conforming to a team’s physicality, but finding a way to combat that. If Toronto played to the referees in the third as they did in the second, it would open the door to the period being the best it could.
For the third period, Syracuse came out swinging. With an agitated Toronto, Cameron Gaunce made a point hammer-shot through traffic. His drive found a battling Taylor Raddysh, to make the deflection goal.
Toronto failed to tie the game in the late stages. With a power play just passed the four-minute mark and an empty net for north of two minutes, they couldn’t beat Martin. Kenny Agostino, Nic Petan and Pontus Aberg all made several attempts at Martin, but couldn’t solve him. Syracuse ended up taking the close matchup by a score of 2-1.
Head Coach Greg Moore commented on the Crunch’s play postgame.

“We were expecting them to come out much harder than they did yesterday. they provided a very good push in the first five minutes.”

Toronto’s next game comes on Wednesday in Bridgeport at 7:00pm EDT. The game will be live on AHLTV.