DENVER – Colorado was poised to be hurting in net nine days before the trade deadline. 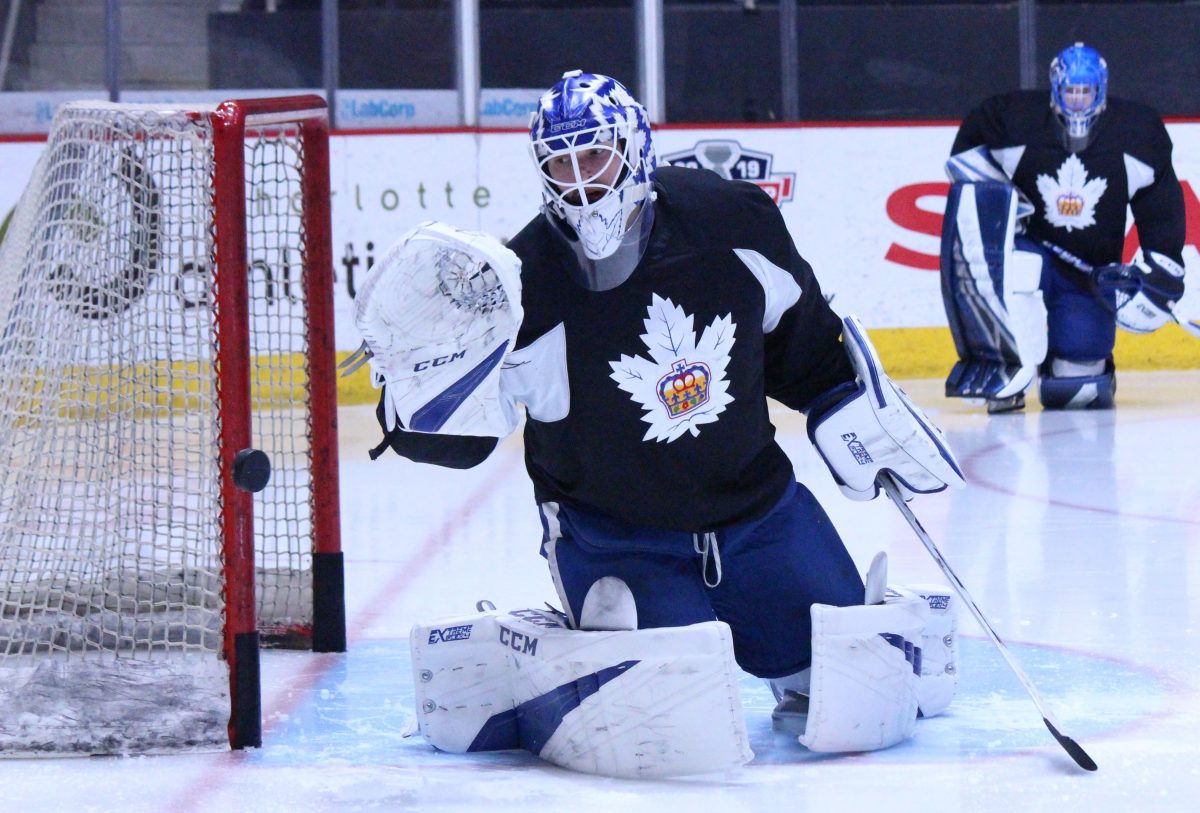 DENVER – Colorado was poised to be hurting in net nine days before the trade deadline. As Philipp Grubauer went down with a lower-body injury on February 15, it bumped previous back-up Pavel Francouz into the starting role and called up usual Colorado Eagles starter Hunter Miska to fill in as the secondary netminder for the Avs.
Francouz held up his end of the bargain this past week, earning NHL First Star of the Week honors for his outstanding efforts (3-0-1, 1.46 GAA, .941 SV%, one shutout) in his four starts after Grubauer’s injury.
Nevertheless, as the NHL Trade Deadline loomed, Avalanche General Manager Joe Sakic wanted to make sure that he had his goaltending bases covered.
Sakic pulled the trigger on a “depth goalie” that he had wished to acquire at the deadline, sending defenseman Calle Rosen to the Toronto Maple Leafs in exchange for netminder Michael Hutchinson on Monday morning. 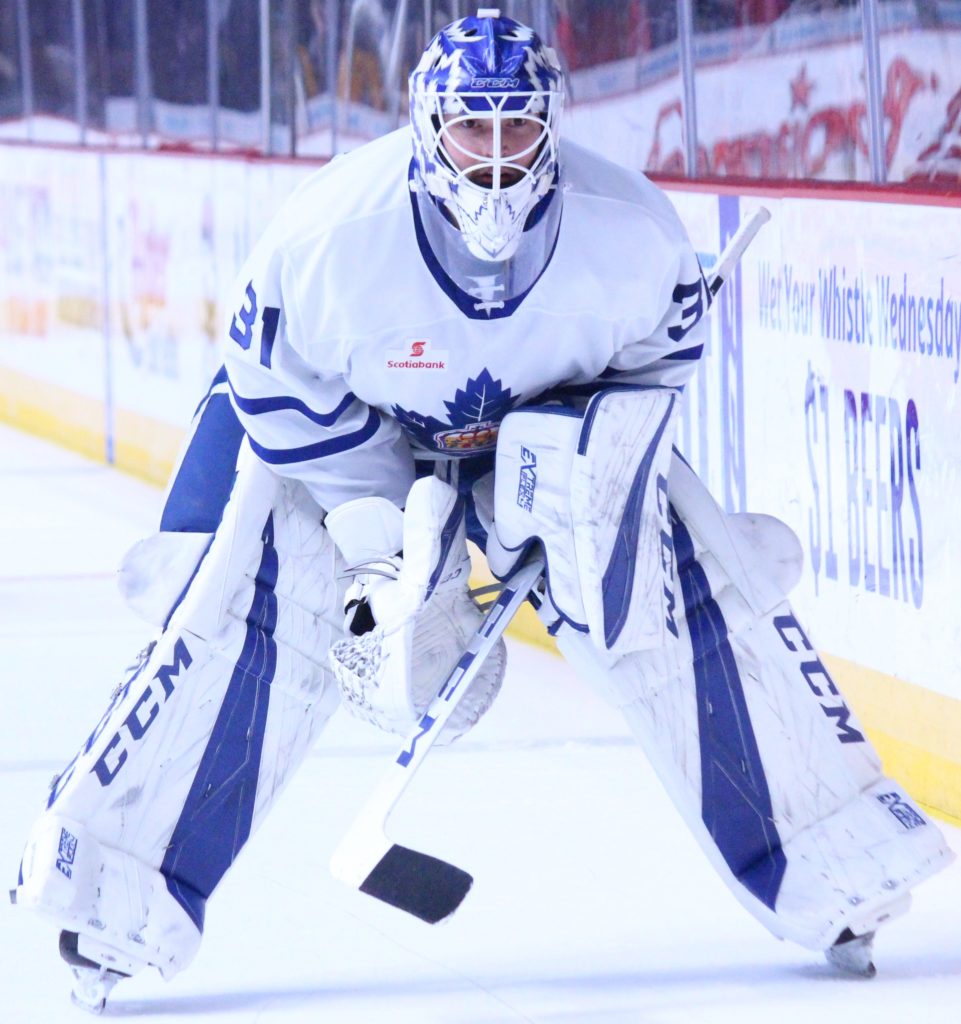 Goaltender Michael Hutchinson warms up for the Toronto Marlies before Game 6 of the AHL Eastern Conference Final against the Charlotte Checkers on May 26, 2019. Photo Credit: Sarah Hobday

Upon first glance, Hutchinson’s stats with the Toronto Maple Leafs this season appear less than optimal, even for an back-up goaltender (4-9-1, with a 3.66 goals against average and .886 save percentage). His AHL sample size this year with the Marlies is small but much more impressive (3-1-0, 1.98 GAA, and .943 SV%). But, with the Avalanche planning to keep him up in the NHL for the time being, his AHL numbers are a bit of a moot point.
However, The Sin Bin’s Zack Power has seen “Hutch” progress since his 2013-14 campaign with the St. John’s Ice Caps, bringing a viewpoint outside the vacuum of this current season.

“I remember when Hutchinson joined the IceCaps (in 2013-14). He was labeled as this star goalie from Providence who had a lot of potential. When he first came about, it was an awkward time where St. John’s rostered three really good goalies. But, he was a big reason why the Caps made it as far as they did in the 2014 postseason. He had a crazy stat line in the playoffs [12-9-3, 1.95 GAA, .938 SV%]. 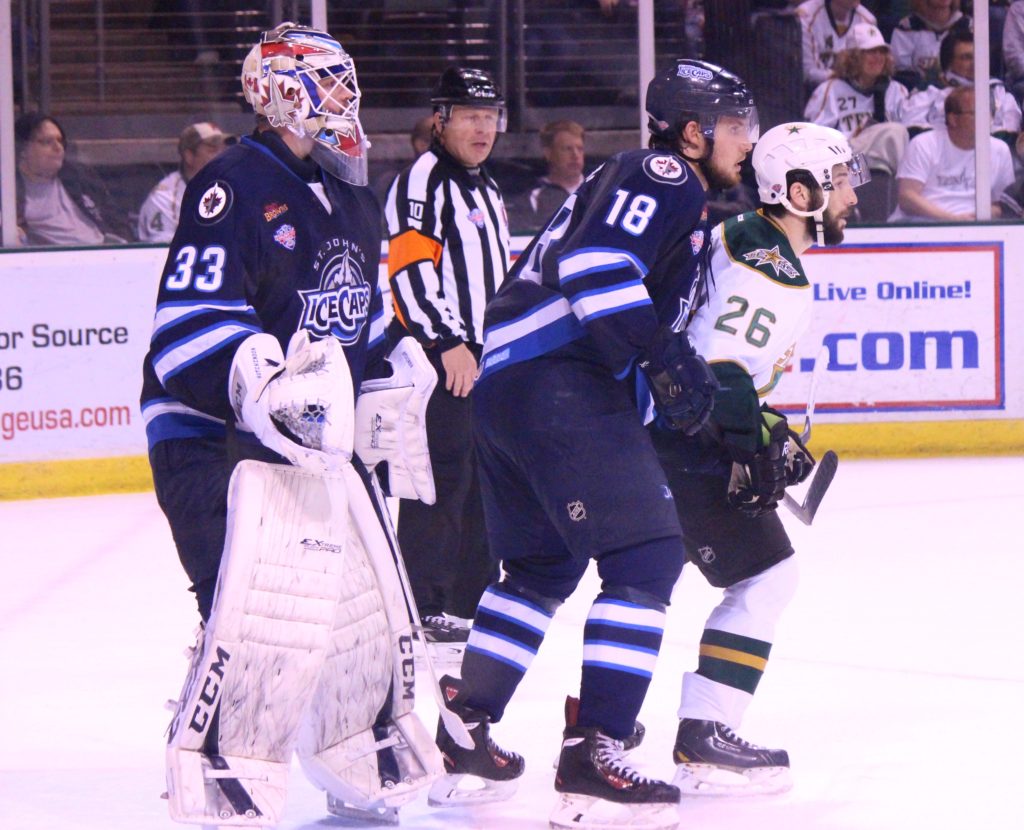 Hutchinson made 49 saves in a 2-1 victory for the St. John’s IceCaps in Game Two of the 2014 Calder Cup Finals against the Texas Stars. Photo Credit: Sarah Hobday

“The next season they called him up to the Jets, and he actually played decent for them for the longest time. He was kind of in this odd limbo, though; they had two good goalie prospects and not enough room to play and develop them both.
“Fast forward to a couple of seasons later…he never really found his footing in Florida, he played average for the Leafs and alright for the Marlies (I only say alright because of the team he had ahead of him. All he had to do was stop the puck and he had a Calder Cup).
“This season, the media had it out for Hutch; He had a lot of people breathing down his neck. When he got called down to the AHL near the beginning of the season, it was kind of a wake-up call for him, and he played damn good with the Marlies for those couple of games — almost too good for AHL. 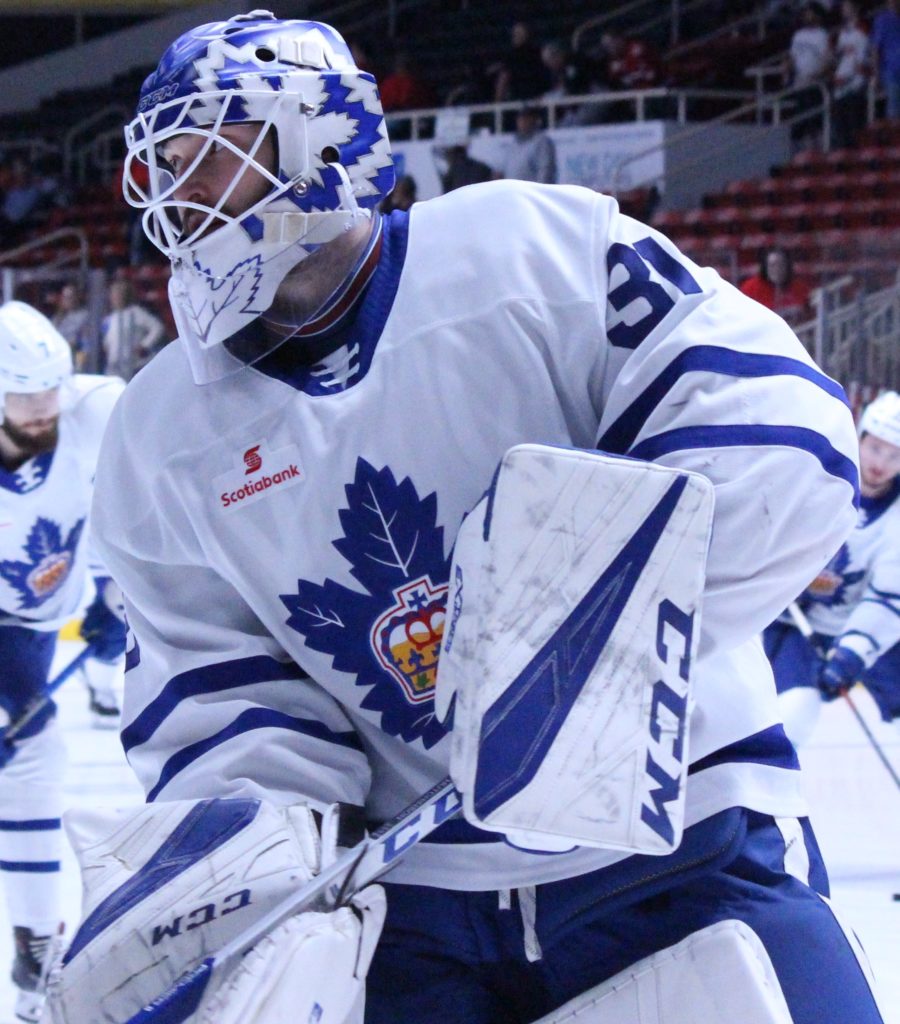 As planned back-up to Avalanche netminder Pavel Francouz, Hutchinson will look to rehabilitate his up and down NHL statistics behind a solid Colorado defensive corps. Photo Credit: Sarah Hobday

“I personally believe he played well for the Leafs after he got called up. It’s the same Leafs team now that is “struggling”. They couldn’t keep him in the AHL, because (Joseph) Woll and (Kasimir) Kaskisuo are too good to go the ECHL. so, Toronto had to get rid of Hutchinson. He will play good in Colorado…less pressure on the poor guy.”

Catherine Silverman, goaltending analyst for both The Athletic and Mile High Hockey, contributed her opinions on Hutchinson in an article for Fansided’s Editor in Leaf one year ago. Silverman agreed to let The Sin Bin re-publish her analysis for this article.

“I think he had a severely missed opportunity with the Winnipeg Jets. His numbers weren’t nearly as bad as fan perception made him out to be, and he was a competent backup on a team that, by and large, struggled with goaltending across the board.”
“(In 2018-19), His numbers (were) mediocre, but he hasn’t gotten a lot of playing time anywhere. And after a lot of lack of use with the Jets in those final years too, getting trapped in the system with the need for (Connor) Hellebuyck and (Eric) Comrie to get the lion’s share of the starts across the board, it’s tough to tell whether there’s been any major setback in his style or if he’s just looking rusty from inactivity.”

Stylistically, Silverman pointed out that Hutchinson has poor post recovery after initial saves, something NHL-caliber talent pounces on when given the chance. Even so, the Avalanche’s defensive scheme should be up to the task to take some of the pressure off Hutchinson during his starts in net (as they’ve done thus far with Francouz in the absence of Grubauer).
As for Miska, he returns to the Colorado Eagles roster without having to step in for the red-hot Francouz this past week. He will more than likely get the start on Sunday, February 29 against the visiting Milwaukee Admirals. Puck drops at 7:05pm MST.
Follow C.C. on Twitter for live, in-game reporting and various news & notes regarding the Colorado Eagles! Don’t forget to also follow The Sin Bin on Twitter and Facebook for all additional AHL, ECHL, and SPHL minor league hockey coverage!